As we were Sunday (May 24, 2009), 康代’s parents had decided that it was the perfect occasion for a short family daytrip to the Tokushima Prefecture, starting with the Naruto Whirlpools!!!

Wait? What? We were going to see whirlpools? First, the name kinda sounded like a rock band’s name from the fifties (or worse, like a troop of acrobats). I really wondered what to expect? Were we going to stand above a bunch of sinks that would empty all at the same time? This is more or less what I was expecting, and I really wondered why my father-in-law thought it was a great idea to drive for more than an hour to see that. I had just spent my first week in Japan visiting amazing temples, unbelievable gardens and lovely islands, what could be so interesting with those so-called Naruto Whirlpools? And isn’t Naruto the name of a manga anyway?

Well, actually, Naruto Whirlpools are among the biggest and most impressive whirlpools in the world! To the point that a whole tourism has developed around them. Who would have thought? 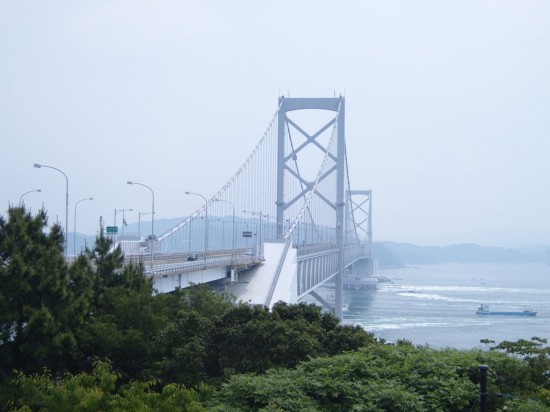 So we went to Tokushima, more precisely to the Ōnaruto bridge that links Shikoku to Awajishima. In other words, we went back to the exact spot where I “entered” Shikoku for the first time a week earlier, aboard the bus from Kansai International Airport. Except that this time we didn’t take the highway but the coastal road, which is sure slower, but which allowed me to see a bunch of incredibly charming little fishing villages full of amazing traditional houses (with their green and blue roofs that never cease to amaze me, they look so “fake”). Unfortunately, I couldn’t take any half decent picture.

The other way to watch them is to hop on boats that go right in the middle. Something I’ll have to try one day.

So, what’s the deal exactly with those whirlpools? Well, it’s pretty simple actually. In case you’re not too familiar with Japan’s geography, I advise you to follow along with Google maps or any other map near you (there’s one at the end of this post). As you can see, the Naruto Straight is one of the few connecting points between the Seto Inland Sea and the Pacific Ocean. Then, it’s all a question of tides and funnels. When the tide recedes in the ocean, it sucks in some of the water from the Seto Inland Sea that “empties” through the straight because of the funnel effect. 6 hours later, the tide rises and water is pushed from the Pacific Ocean into the Seto Inland Sea. The result: 4 times a day, big whirlpools are formed where the waters from the ocean and the sea meet in the straight. If you want more technical details, I’m sure the Internet can help.

The only thing I can say is that it is impressive indeed, much more than the following pictures. You can’t imagine how hard it was to take pictures there. Not because of the whirlpools nor the fact we were that high (well, that didn’t help) but because of the crowd that massed right at the best spot to see what’s going on (and I wanted to avoid taking picture of a bunch of hair).

I realize that those pictures could be misleading. These are not the corridor one walks down to reach the observation deck. These parts are not open to the public, they’re maintenance corridors. The ones where visitors walk are enclosed for the most part and protected with walls and windows.

After seeing the whirlpools, we went to…the Whirlpool museum! (only in Japan) It was much less impressive, but quite educational… if you can read Japanese…
All in all, it was an interesting thing to see. Pretty different from everything else I have seen in Japan during that first trip, but I don’t regret a single bit having gone there. I even want to go back, but this time, on a boat, in the middle of the Naruto Whirlpools!