Today, we’re back to Shodoshima and to the beginning of the summer session of the Setouchi Triennale 2016. I’m going to show you a few artworks located in the southern end of the Mito Peninsula (itself the southern tip of Shodoshima).

It’s one of the least visited areas of the Setouchi Triennale, mostly because it’s far from the major “routes” and it’s hard to access without a car (hard but not impossible, you just need to organize your bus rides carefully, that’s what we did). In any case, it’s a shame that there are so few people, as it’s a very interesting and beautiful area. There, you can find some of my favorite art, and the village of Konoura (pronounced “Kohno-oorah”), a place where the locals are as welcoming as they are on Ogijima and a place where life seems very pleasant too.

OK, I don’t have all night and neither do you, so let’s get started.

Let’s get started with… a house! 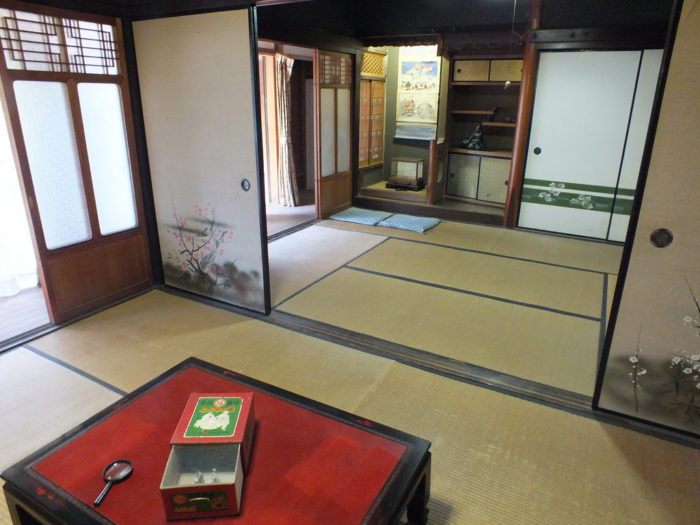 A very normal house. However, if you look closely, there’s an intriguing box on the red table. And why the magnifying glass?

Here is what you can see inside the box: 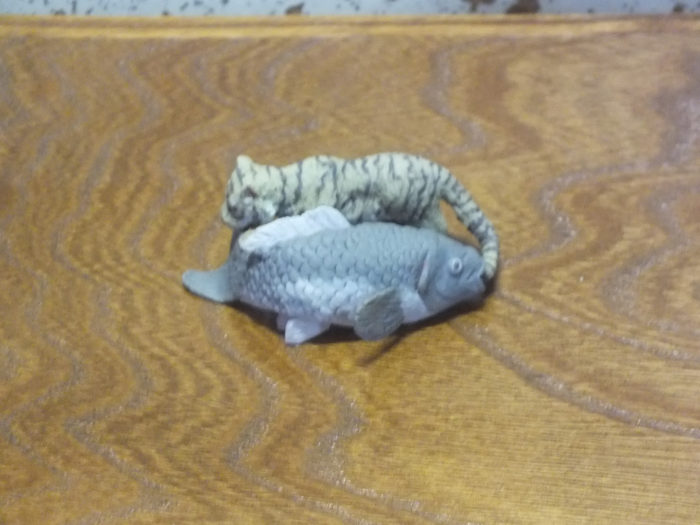 (note to self: make sure you take the same picture several times when you shoot small objects, in order to avoid blurry pictures).

So, it’s a fish and a tiger. They are a very special fish and tiger, as they’re made of eraser (or rubber if you speak the British kind of English). Now, don’t get mistaken by the sculpting process. The artist, Saya Irie, didn’t just take an eraser and skillfully carved it in order to make that tiny sculpture.

What she did is much more elaborate and most likely very difficult.

First, she took some traditional drawings, and then she erased them. She erased them in a very peculiar way, color by color, making sure to keep and sort the eraser residue. Then, she used the residue as raw material to recreate the erased drawing as a tiny sculpture.

So, the sculptures are made from eraser residue that came from erasing a picture that the sculpture represents. The different colors in the tiny sculpture coming directly from the colors of the drawing. Basically, the drawing itself has become a sculpture. A tiny but extremely detailed sculpture. Pictures can’t really convey how difficult that must have been to get such a result (even more so blurry picture).

Why were they located in a house that wasn’t abandoned – or arranged in a way that made it look like it’s not abandoned (I don’t know which is which)? No idea. 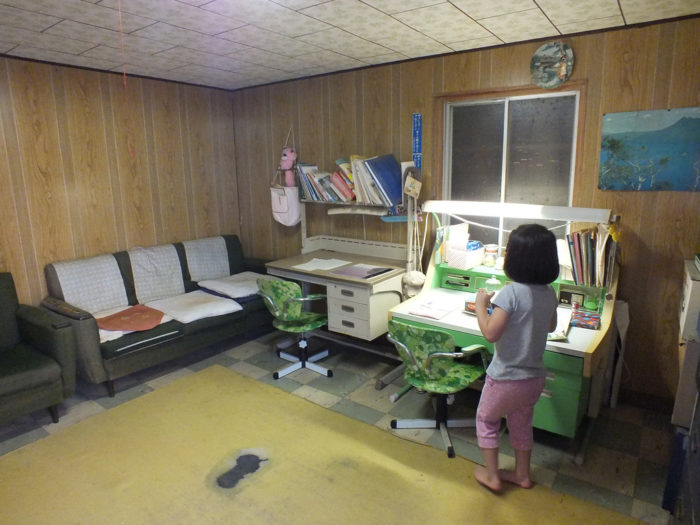 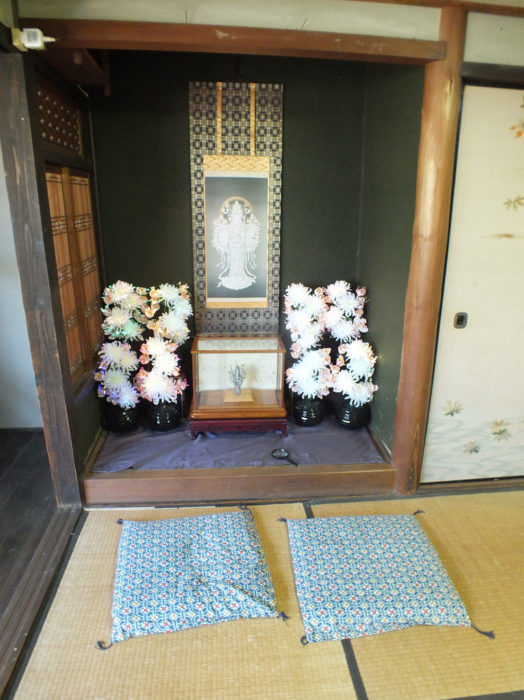 Here is a close-up : 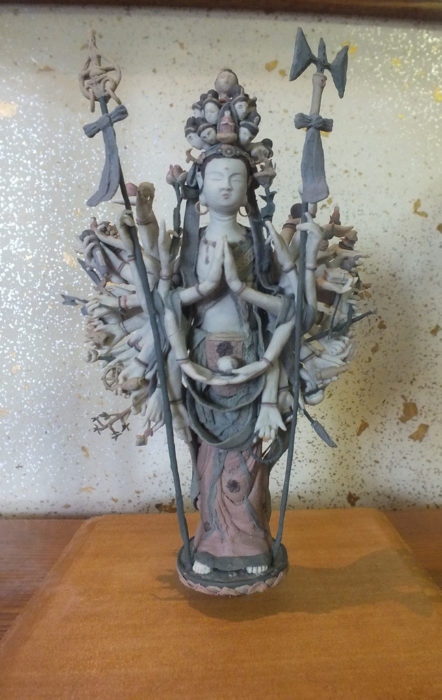 This is Kukuruhime Garden (well, that’s the name of the whole installation, really), and this statue is no more than 10 cm high, made of eraser residue!

Next, we headed to the southern tip of the peninsula (which is also the southernmost point of Shodoshima to see Toshimitsu Ito‘s works. The first sculpture we encounter is called Boy and Monster:

The second one is a few dozens of meters away on the beach, and it may have the longest name for an artwork I have seen: This sculpture has a life of ten thousand years, and in the span of a man’s life moves about ten meters. 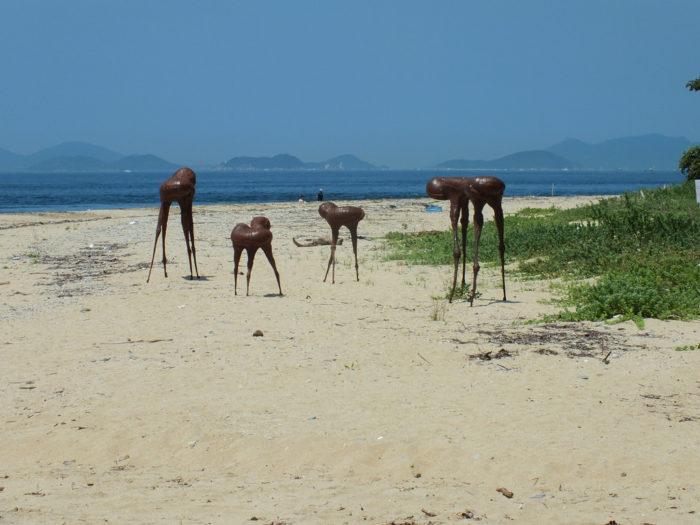 I still don’t know what to think of it. Part of me likes the surrealist vibe those not-really creature give out. Another part of me isn’t so sure.

Anyway, next we headed to the hamlet of Tanjiri for some land-art; 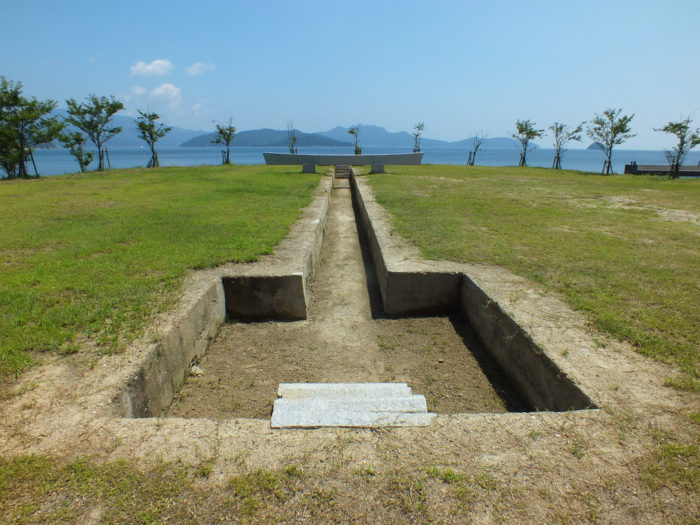 Garden of the Border by Mitsuharu Doi 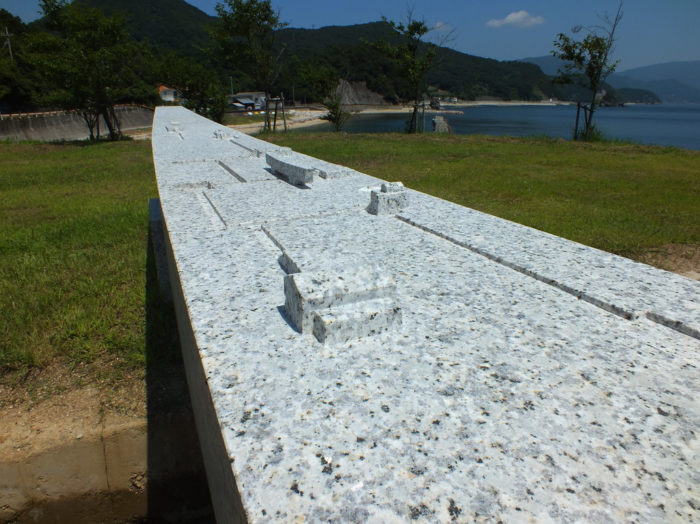 On the way back to Konoura, we ran into a small island that really is just one big rock. It’s called Hanasuwajima and if the name sounds a bit familiar to you, it’s because it’s the islet that inspired Kana Kou for her piece, the Secret of Hanasuwajima (that I’ll show you sooner or later). For some reason, her installation is not nearby but a few kilometers away on the way to Ikeda. 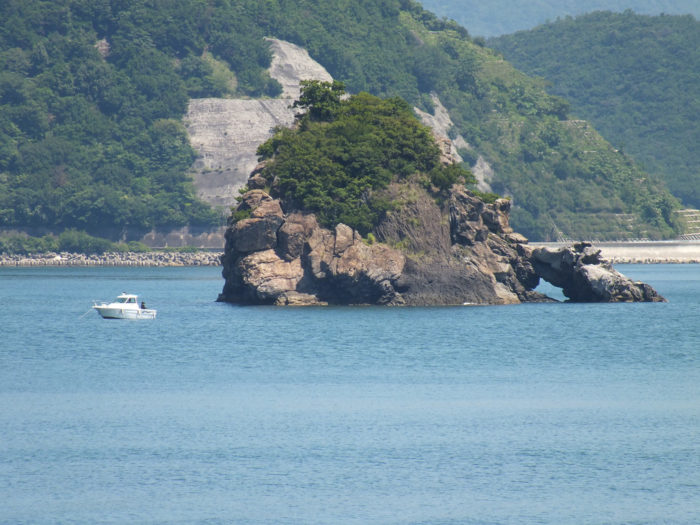 Back in Konoura, we met up with James Jack at the village’s Shima no Ie. Long story short, in 2013, when the Mito Peninsula was included as a Setouchi Triennale site for the first time, every village and hamlet of the peninsula set up some small “visitor centers” in order to welcome visitors. There, you could find information, food, drinks, and last but not least a place to rest and meet locals. Once the Triennale ended, all those places closed, except for one, the one in Konoura. It has become a permanent thing and in between triennales it is used by the locals as a community center for various events, or simply to socialize. I can say that I’m not surprised a bit. Back in 2013, Konoura was the place where I met the most welcoming and friendly people of all the new places I went to, on par with Ogijima‘s or Karato‘s people.

So, when you go to Konoura, make sure you stop there on your way to the artworks, you’ll thank me later.

After a small chat, we headed to Sunset House. Despite having met James several times and having been to the house before, it was my first time there with him.

If you’re not too familiar with Sunset House, let me advise you to read this pages first:

Beyond that, hard to explain what the house is in more detail. Just read the links above, and then go there and watch the video that’s playing inside the house. 🙂 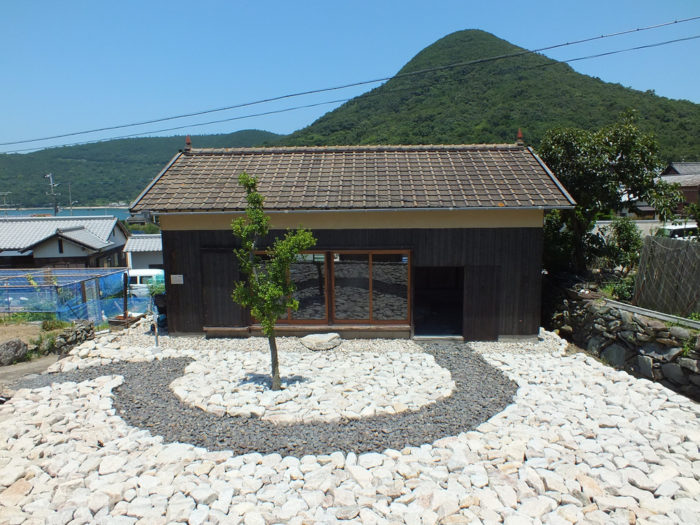 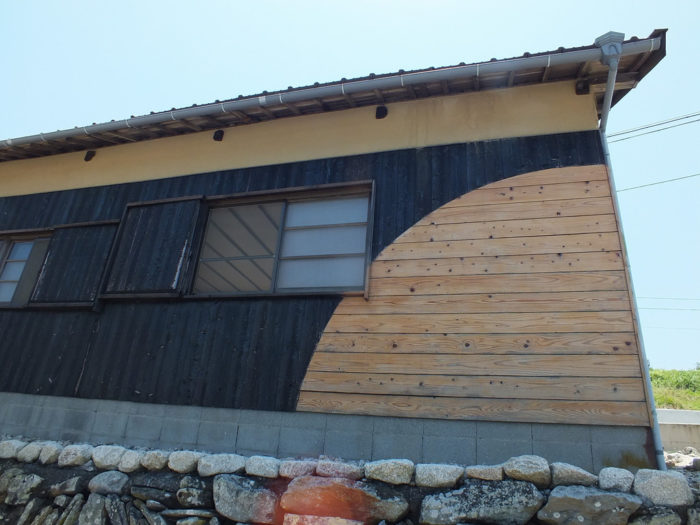 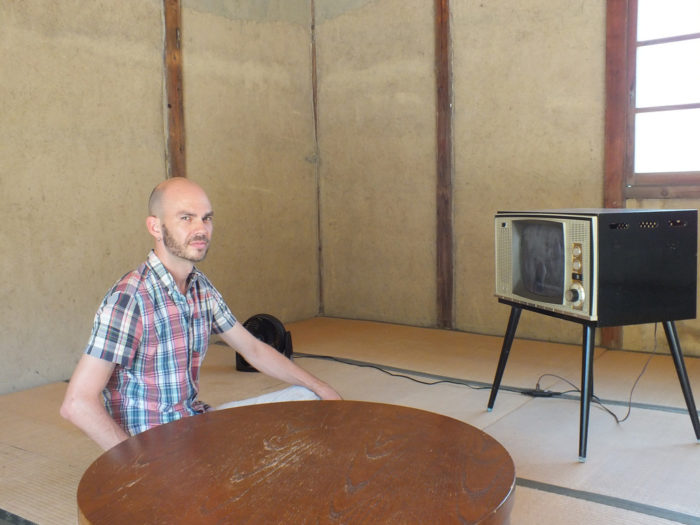 After a very good time in the house with James and his wife, we parted ways and headed to our next stop that happens to be another one of my favorite artworks of the Setouchi Triennale. Really, it’s a shame for the artists that the area gets so few visitors. But I gotta admit that as a visitor (and a blogger) it’s kind of a blessing as we get to have the artworks for ourselves more often than not (just see the number of other people on the pictures and compare to a day on Naoshima 😉 ) 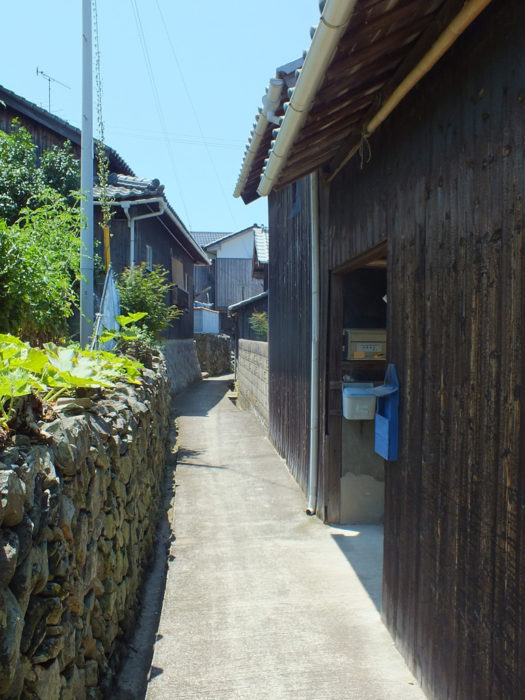 Our next stop was Yume Akasaka‘s Stories – House – which is a wonderful artwork in so many ways. Unfortunately, I won’t show you anything about it today, except this one picture (not of the art, of the house where it’s located). 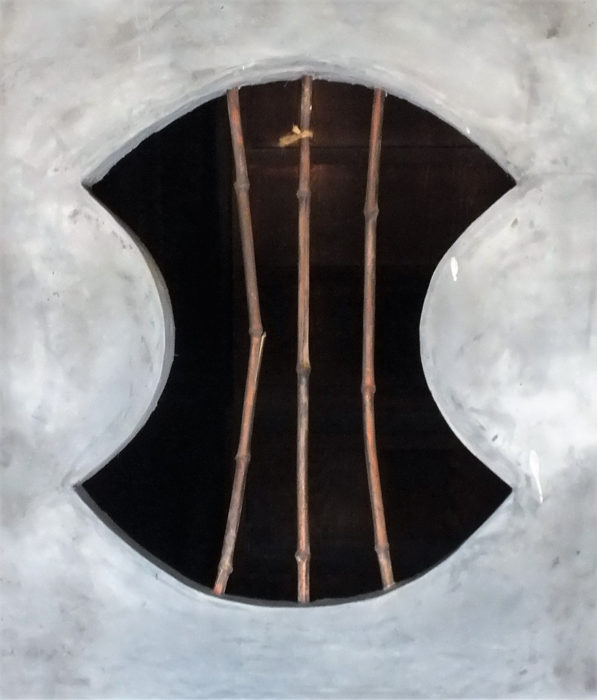 The reason is that James introduced me to Ms Akasaka a few months prior and as she also was there on that day, we met with her and she presented her artwork to us. So I will dedicate an entire post about it very soon. Actually, I had planned to post it during the summer, but that didn’t happen. Ms Akasaka, if you’re reading this, please know that I’m sorry for the delay, I’ll fix that very soon.

Next, we headed to our final installation of the day. Hitori Odori (Dancing Alone) by Charles Whorten. 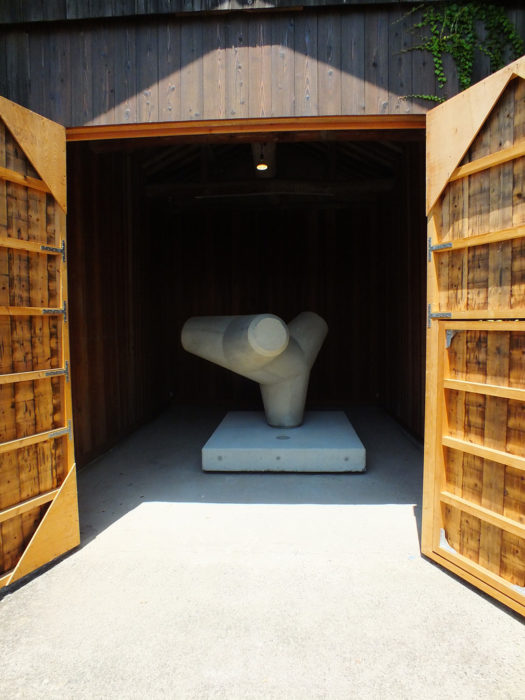 Not gonna lie, ready-made art is not really my thing, even if this one as some degree of “cuteness” (not sure if it’s the appropriate term), but maybe you’ll enjoy it. 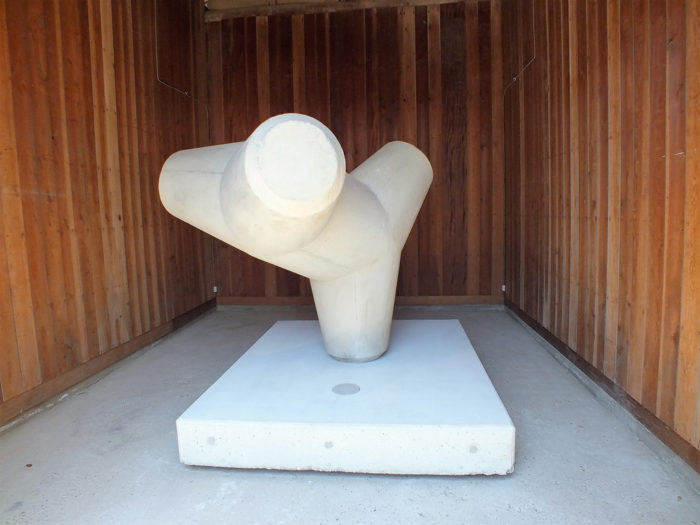 And that’s all for today. I’ll almost certainly return to Konoura this month, so you can expect more of it sooner or later on the blog.

Don’t forget, the Fall session of the Triennale starts this Saturday until November 6th. If you haven’t visited it yet and have the opportunity to do so, do not skip it, it’ll be your last chance to experience some of the artworks (some are permanent, those you’ll be able to enjoy later).