Yesterday, despite the rain, I got together with my friend Cathy Hirano and her friend Ando-san, to start our tour of some of the islands to see the preparations for the Setouchi Triennale which starts in almost a month. 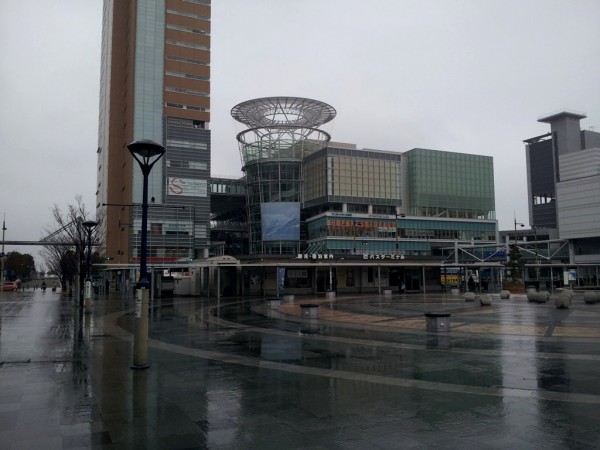 Takamatsu Station plaza, on Monday morning, under the rain.
Must be quite depressing for who goes to work, but that’s not where I was heading.

I was heading to Ogijima! 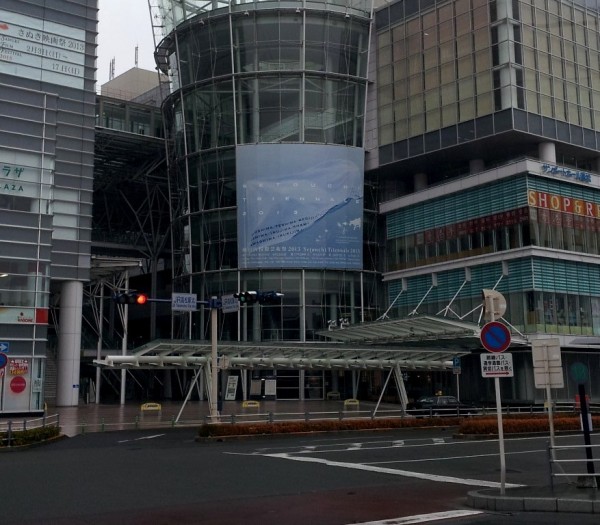 Passing by Sunport Hall, I was glad to see that they have installed a banner for the festival.
It brought back some memories as back in the Spring of 2010, as I was visiting Takamatsu, I first learned about the existence of the Triennale through the banner on the same spot.
(the picture maybe somewhere on the blog, but I don’t have the courage to look for it tonight) 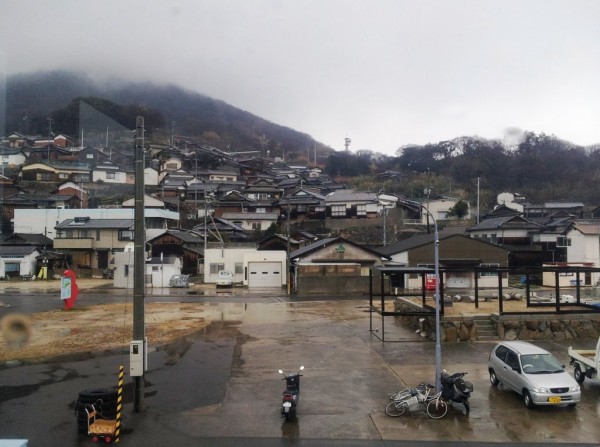 It was the first time I saw Ogichō in such a grey weather. 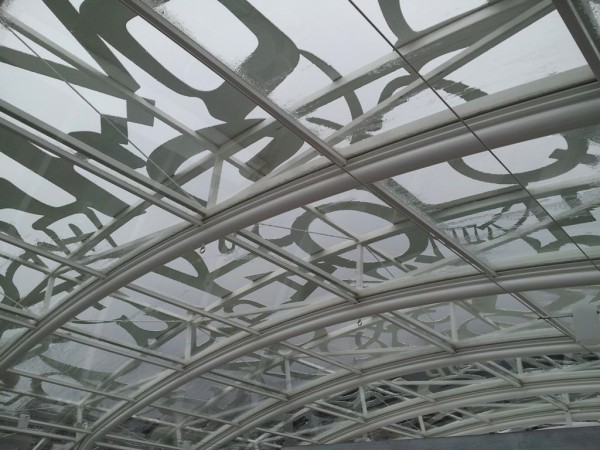 But even in such a weather, both the island and Ogijima’s Soul remain wonderful.

As soon as we got out the ferry, we headed to Onba Factory. It is closed to the public during the winter, but we had a meeting with the Oshimas to talk about the Triennale, Ogijima and whatnot.

This conversation was fascinating on so many levels, and I learned about the island more than I would have hoped (more on that another day). You may be wondering how I followed the conversation as my Japanese is still very rudimentary. The trick was that Cathy was taking notes directly in English, so I was reading them as the conversation went on. It was a little bit like having live subtitles… 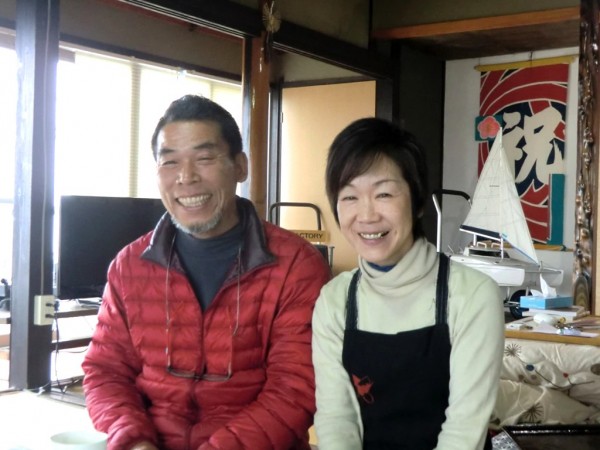 Soon, it was lunchtime. A good occasion to return to Madoka (I hadn’t been since last Spring I believe) especially because Cathy and Ando-san had never been. Coincidentally, the Oshimas were thinking about having lunch there too. So we all went together.

As usual, it was delicious. As usual, most of the food came directly from the island. Mr Madoka even made us taste something interesting: sea cucumber filaments. It was pretty good actually. 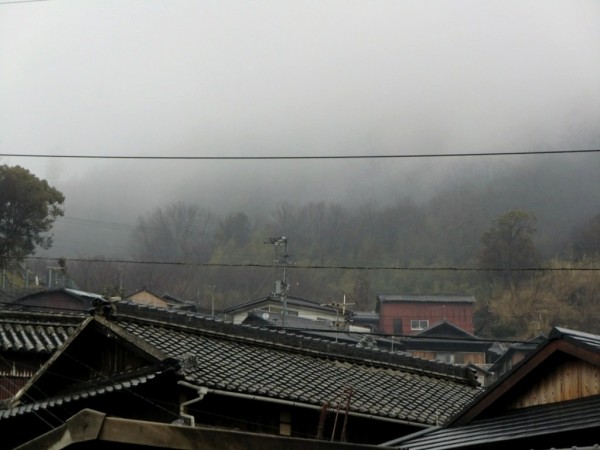 After lunch, we headed to a formerly abandoned house, located right next to Takeshi Kawashima & Dream Friends gallery (also closed during the winter). This house is now occupied by Sayaka Ishizuka (or rather her art).

Ms Ishizuka was there with three Koebi Tai volunteers and they were working in her artwork that will be presented for the Triennale.

These next pictures won’t show you much, but that’s the point:

Our next stop was a familiar house: 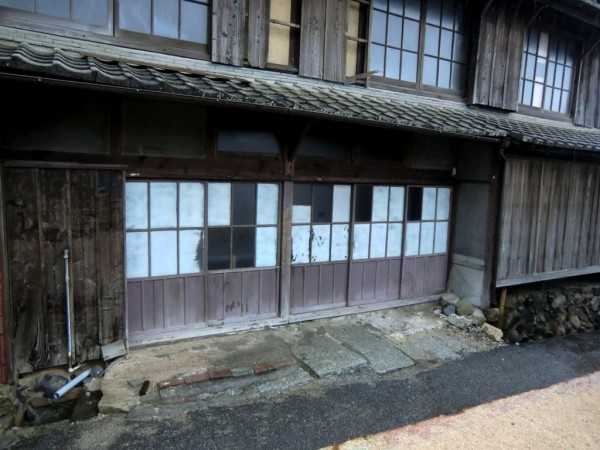 If you know Ogijima well or if you attended the 2010 Art Festival, you may have recognized the old Uchiwa Bone House where Takashi Nichibori had made an amazing installation from Uchiwa frames. I realize with horror that I never really talked about it here. The installation can still be seen today inside the Uchiwa Museum in Marugame, I’ll try to tell you more as soon as possible.

Mr. Nichibori is using the house again for another installation that I had a glimpse of yesterday. I can’t tell you or show you more as the people who were present preferred not to let us publish any information in the absence of the artist. Also, they were quite busy and not too chatty. I won’t blame them though, when Cathy and I decided to visit the islands now, in the middle of all the preparations, we expect to meet busy people that we would disturb. It’s actually the opposite, people being very welcoming, that surprised us.

Then, we headed to Ogijima’s “other side” the one that’s more recent and not as beautiful. This is where the fishing port is located, and this is where Mr Oshima has started his new project: Team Ogi!

And if I know most of the details about it, I’m not going to give them out just yet, although it’s not too difficult to guess from the pictures (and even less so if you can read Japanese and you check out Team Ogi’s blog):

That’s all for yesterday’s visit. The rain prevented us from staying longer on the island, especially because – to our knowledge – the other artists were not present on the island yesterday (apparently Oscar Oiwa is around these days, but not yesterday, I really hope I get to meet him at some point), or even from going to Megijima (that was the original plan). Yes, it was that bad (well, the rain and the cold together were bad) 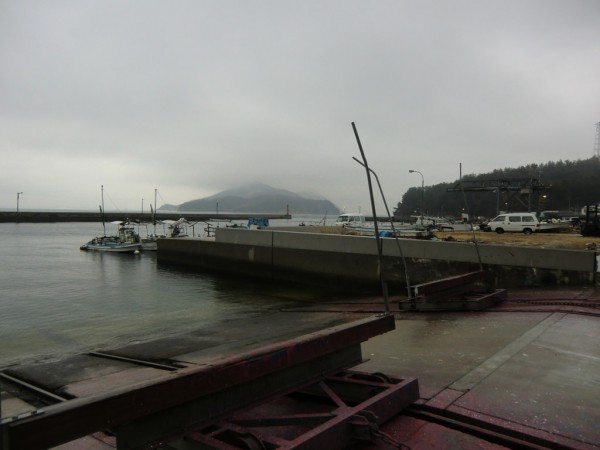