If you’ve been following the latest news about Ogijima, you know that a little more than a year ago, thanks to the arrival of 21 new residents on the island including 6 kids (which would bring the number of kids on the island to 9 if I’m correct), it was decided to reopen the school that closed in 2010.

However, the building was old and not up-to-date with the current seismic safety standards. A new one had to be built. A temporary school was built in the port, right next to Ogijima’s Soul, you can see some glimpses on this post. Meanwhile, the old school was basically going to be demolished and rebuilt.

Work started about a year ago, and is still going on. It’s a long process due to the school’s location both on the island itself (an access ramp had to be built so that construction vehicles can reach it and such – for this, part of the small hill on which the school is built had to be reshaped) and the fact that it’s on the island (I wish I had seen the way the excavators and other vehicles were brought on the island in the first place).

Here is what it looked like back in January: 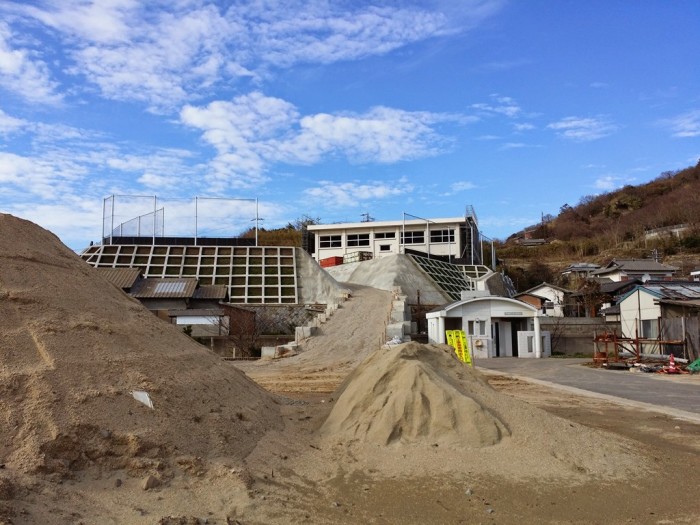 The main building is gone. The “back building” is still standing, I’m not sure if it will be kept or also demolished sooner or later. The playground in front of the school has been completely redone (the “grid” on the slope is brand new). I’m not sure if the access ramp will stay or will be removed with construction is over.

And in case you wonder why such an endeavour (and such spendings) for such a small island and so few kids (a lot of people did in Takamatsu city hall if I understand right), the answer is that this is exactly for this that the Setouchi Triennale was started in the first place. Reviving the islands doesn’t mean turning them into tourist resorts, it means making them attractive for people to move there too, and schools are one of the most important things to make them attractive.

I can’t wait to see the new school (and hopefully attend its inauguration).