A New Topic on the Blog

Today I’m starting a new topic on the blog. It’s been in the back of my mind for a few months, I was a bit hesitant at first, partly because I already have trouble keeping up with all the current planned posts, and this topic will be a major departure from what this blog is usually about. But hey, one of the strengths of blogs is that you can always experiment with them, right?

I rarely talk about the details of my life here, apart from my visits here and there in Takamatsu and around. My inner thoughts and things like that? Well, putting them out on a blog is not really my thing. Some people think that blogs are made for that, and while I respect that opinion it is not mine.
Personally, instead of talking about oneself, I think that blogs are the perfect tool to talk about one or several specific topics, but with a personal touch, a certain point of view. This is their force and their strength in my opinion. This is particularly the case for blogs like mine that focus on a place or an area. If you’ve read this blog more than once, I assume it’s because Takamatsu, Kagawa Prefecture and/or the Seto Inland Sea are of some interest for you, much more than how I spend my days around here. If you care about my very mediocre pictures it’s because they show you what Ogijima, Naoshima or the Ritsurin Garden look like, not because you want to see me posing in front of their landmarks (on a side note, in this day and age, I have trouble understanding the very existence of pictures showing someone posing in front of something more or less famous. A generation or two ago, I could understand, but not in the 21st Century).
In other words, telling publicly about my personal life is not something I want to do here. And honestly, even if I live in a somewhat exotic location, my everyday life is not that different from yours; I get up in the morning, I spend a good chunk of my day at work, and I go home at night.

So… Why am I writing this? What is my point ?

Let’s say that for a little more than a year (14 months to be precise), there is something that drastically changed my life; much more than moving to Japan actually. Of course, I’m talking about my daughter’s birth.
And today, I want to tell you a little bit about her.

The Torments of Fatherhood

No, don’t run away. It’s out of the question to fill this blog up with pictures of a baby that only her parents find cute (I’m joking of course, she’s actually the cutest baby in the world). I don’t impose that to my Facebook friends, I won’t impose it on you.

I want to tell you about her with a specific approach and point of view: my experience as a father of a binational and bicultural child (and her experience too of course).

It has been in my mind for a little while – among other reasons in order to share my experiences with other people in the same situation – and it’s a mini-incident (nothing serious, don’t worry) that decided me to do it.
Of course, just like every other parent, I already worry about her; but on top of the usual worries (Will she get good grades at school? Will she date good guys or losers? – I’ve starting practicing boxing and sword wielding just in case. Will she properly take care of her father when he’s senile?) there is one more concern to worry about in our situation, and that will be showing up as she’s starting to have a social life: racism.

Yeah, I know, talking about racism in Japan is a bit like beating a dead horse at times, however, while I don’t think it’s worth obsessing about (I’ll take Japanese racism over many other racisms any day, especially the kinds that can be found in the US or Europe), it’s still worth talking about at times.

First and foremost, I have the feeling that the relationship Japanese people have to foreigners in my part of Japan (or more generally in the West of the country) is quite different and less racist that what I’ve read and heard about from people living elsewhere (read: Tokyo and more generally the Kantō area).
I guess the fact that we are pretty rare around here changes things a little. Sure we really are seen as oddities, and yes, people stare sometimes, but on the other hand, we rarely experience some of the clichés and prejudices I hear that many foreigners experience in Eastern Japan.
But even if racism is less present here, that doesn’t change the fact that Hana is a little Japanese girl with a European face. And part of her education and culture will come from the other side of the planet. She can’t avoid that, and it’ll be part of her life until the end.

Now, it’s our job – her parents – to make sure this is not a burden but rather an asset for her.
Problem: there is no instruction manual for that.

So, this is more or less where the idea for this new topic on the blog come from: to share with you some events and anecdotes linked to the fact that Hana is not a “normal” Japanese, hoping you’ll find them interesting, as well as to kinda try to write that instruction manual, why not with the help of parents in the same situation as ours. 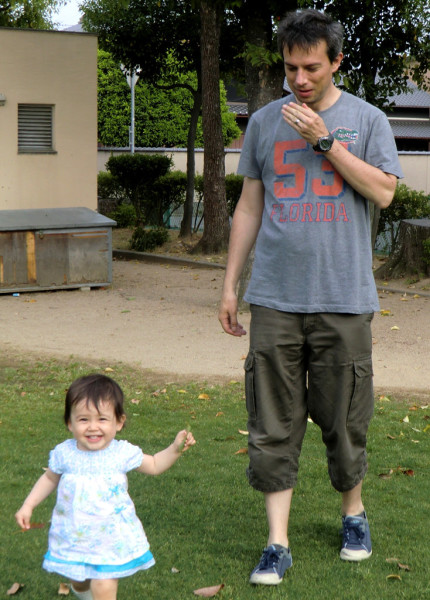 Not our best picture, however, it’s my favorite current one for some reason.

Ok, this post is starting to get a bit long, so we’re going to stop soon, but I can’t leave you without telling you about the small incident I alluded to earlier, can I?
For starters the term “incident” is a bit strong. Nobody was hurt nor affected by it. Hana didn’t understand nor realized that something was not OK. However, similar situations will happen again in the future, and little by little she will understand. It is my duty to find a way to prepare her to it, if it’s even possible to do so.

So… It all took place in one of the playgrounds in the neighborhood, her favorite one, because it has a slide that she got obsessed with.

And for one more side note: by the way, as a new parent, I really like the fact that in Japan – or at least in my part of Japan – every residential neighborhood as not one, but several playgrounds and parks to children of all ages. Back to our story now:

The Playground is a Jungle

It was the end of the afternoon. When we arrived at the playground, most children had gotten home already, but a few remained, especially very young ones. It’s indeed the perfect time for toddlers. It’s not as hot, the sun is lower, older kids are gone and the atmosphere is quieter.

One thing you need to know about Hana is that she’s a very sociable little girl. She’s not scared of other people like some kids her age can be, and she especially love other children.

When we got there, a little boy, four or five years old, was putting his bicycle on the ground near us. Of course Hana was attracted by it. Of course, the little boy became possessive and didn’t want us to go near his bike. Nothing unusual here, toddlers want to touch everything they see for the first time, four year-olds don’t want other kids to touch their things. But Hana’s attention quickly moved on from the bike to the little boy himself…

That’s when he started to get scared, refusing that Hana gets close to him and repeating “Eigo Mitai! Eigo Mitai!” (“英語見たい” that can be translated to “It sounds English!”)

First of all, the formulation itself is a bit strange. The boy didn’t seem bothered by Hana’s looks, but by the language that was being used. The “sounds” is a bit strange in itself too, but he was a little boy, who knows how well he can express himself.
The problem though, is that nobody had spoken any foreign language up til then (of course, I don’t expect the kid to distinguish French from English). I hadn’t said a word. Hana can’t speak yet, and 康代 was speaking in Japanese at that moment (talking to the boy about his bike).

As I said earlier, Hana was not affected at all. She didn’t understand what was going on, and she forgot the little boy even existed as soon as she saw her favorite slide.

So, no harm’s done. But it’s a certainty that similar situations will occur again sooner or later.

According to 康代 (who spends way more time on playgrounds and kindergarten with Hana than I do) other kids never pay attention to Hana’s looks. That’ll come later. It’s very probable that the little boy was more troubled by my presence than Hana’s. However, to have such a reaction, so young, I wonder what his parents started to rot his brain with.

Actually, the mom’s reaction was pretty interesting too. In general, when whatever incident or altercation happens between two kids, both moms profusely apologize to each other. That mom said nothing to anyone, neither to her boy, nor to 康代.

They left soon after. I can’t tell whether it was linked to our presence or not (the park was getting emptier and emptier). It simply could have been because it was time for dinner.

A few minutes later, a two year old little girl and Hana were pretty much the only kids left. They played a little together, that is – at that age – play alone next to each other more than actually communicating, until it was time for us to return home too. 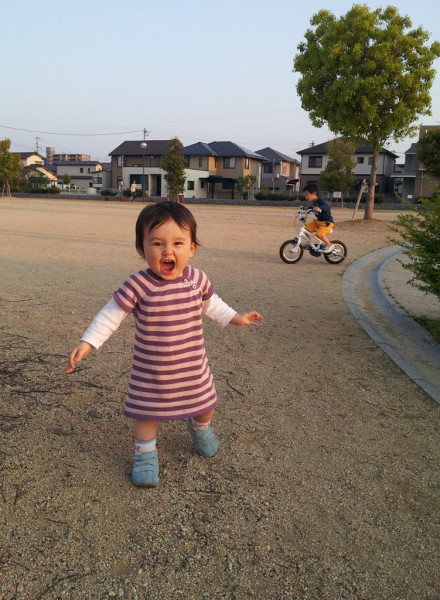 2 thoughts on “A New Topic on the Blog”