I’ve waited for that day (yesterday) with a mix of excitement and apprehension, as it was the day I was finally going to set foot on Naoshima. The island where one day, about twenty years ago, the Benesse Corporation decided to set up a Contemporary Art Museum, which made the place world famous in the art circles and a few others. It was also the first step to what eventually led to the creation of the Setouchi International Art Festival. 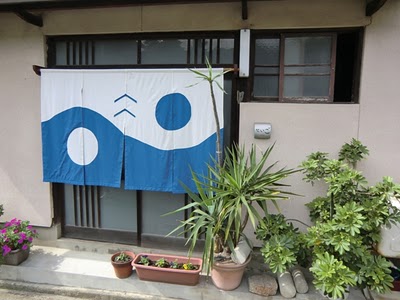 And? What did I think?

And, the island looks more or less like what I expected. Of course, nothing comparable to Ogijima. What we have there is an island that receives quite a number of visitors all year round, an island with an actual economy, an island small enough to have an unique atmosphere, but big enough so that there are a couple of towns, cars and even a small bus system.

The first thing I noticed was the type of people that were visiting the island. Compared to what I had observed elsewhere (Ogijima and Takamatsu), the crowd on Naoshima is quite different. More numerous, that’s a given, but also younger, and more international (it was the first time I ran into so many foreigners in Japan not in a big city), and most important, artsier. Japanese people dressed the way you’d expect from artists or art students were quite numerous. I’m even surprised there were that many students. Aren’t they supposed to be in school at this time of the year?

What about the island itself?

Well, I can say that it is more than pleasant. It was a little overcrowded because of the Festival, but it must be a great place to travel to or even to live the rest of the time. As I previously mentioned, there’s a real economy on the island, businesses, shops, those things that connects the island to the rest of the world, as opposed to places like Ogijima, which can seem to be their own world at times. There are also real beaches on the island and it is my understanding that those are rare in Japan. In other terms, an ideal place for people who like islands, the sea, culture and calm places (I pity people who don’t like those things, I really do).

Of course, art is ubiquitous on the island, but you had figured that out already, hadn’t you? By that, I mean that, of course, we have all of the museums and other exhibits, but it seems like many individual houses or businesses tend to be arty in one way or another. If more places on the planet were like this one, the world would be  much better place, really.

On the other hand, I have to admit, I was not really amazed by the works presented for the Festival. As you may already know, I’m not a huge huge fan of contemporary art, although I can really get into it, under certain circumstances, for example, when it escapes art museums and galleries. This is what I like about the Setouchi International Art Festival: the idea of using art to develop those islands, promote them, their culture and their people. And while I admit that most of the works on Naoshima try to do that, they seem to fail at stopping being pure works of art, in other terms, they could be located anywhere, it wouldn’t make them different. They don’t feel like they’re linked to the island, that way the art on Ogijima can be.

But enough chatting, I know you’re here for the pictures: 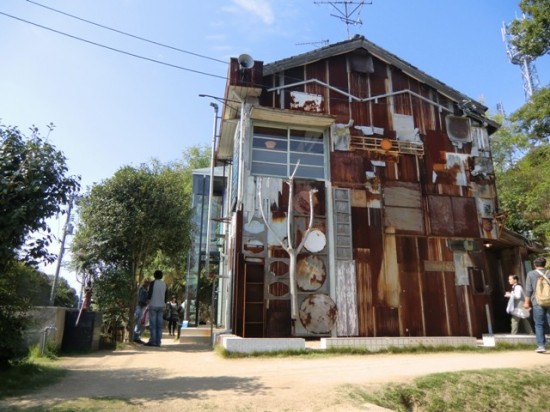 This was the perfect example of what I was just talking about. Sure, the artist takes an old abandoned building to create his art, but what he does from it, despite the fact that it’s very interesting, especially on the outside, doesn’t look any different from what one can find in many art galleries all around the world, especially when dealing with  the inside of the building. The link to the island being quite thin.

And what’s up with this whole “no photo” thing?

I mean, I understand when dealing with really old things, but those things are four months old, for god’s sake!? And this is not with circumvoluted descriptions that I’ll be able to report properly on them. 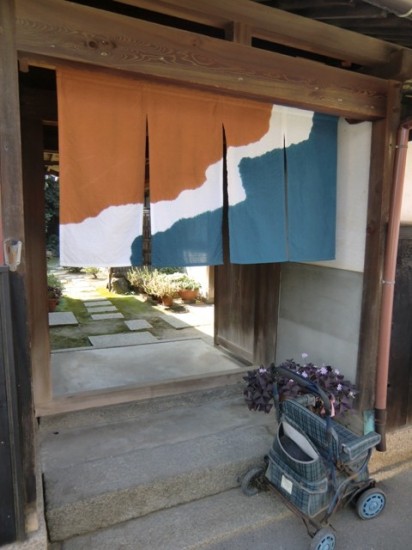 Apparently, on Naoshima, they’re holding the contest for most beautiful Noren or something like that.
Although, they all seem to be in the same style, probably made by the same person.
In any case, they’re all stunning. In the next several days, weeks, months, I’ll share more of them with you. 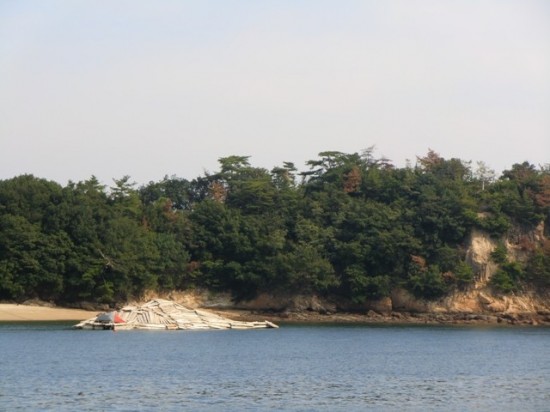 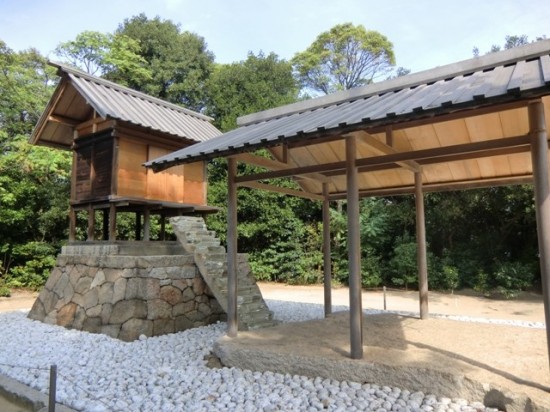 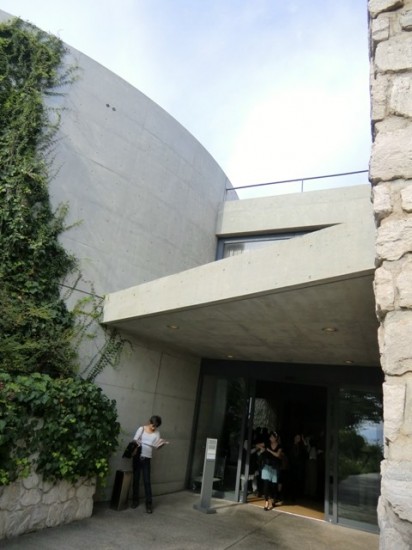 The entrance for the famous Benesse House Museum

Even though, I like Tadao Ando works, what’s inside the building doesn’t really do anything for me (just good old pieces of art that one could find in any other contemporary art museum in the world). 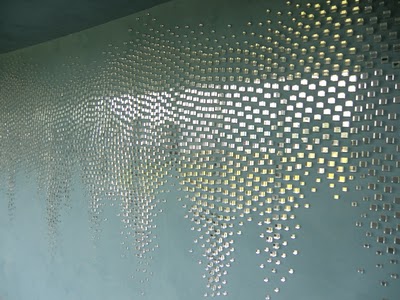 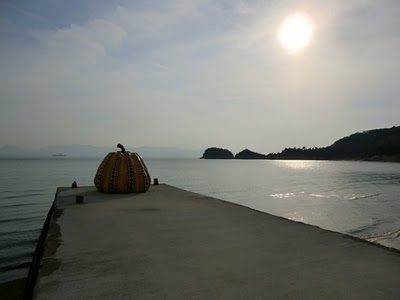 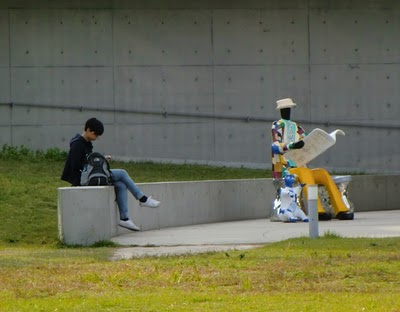 Delphine, my co-traveler, preparing her drawing of the day. 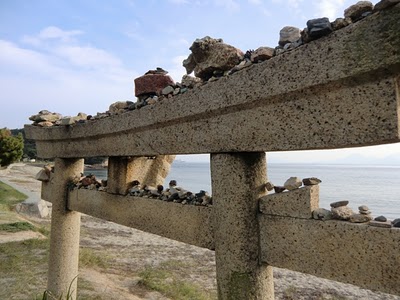 You may know that if you throw a stone on a Torii and if it stays there, they say that your wish we’ll be granted. Well, a bunch of people want to make sure they get their wish, that Torii was no more than 6 foot tall. 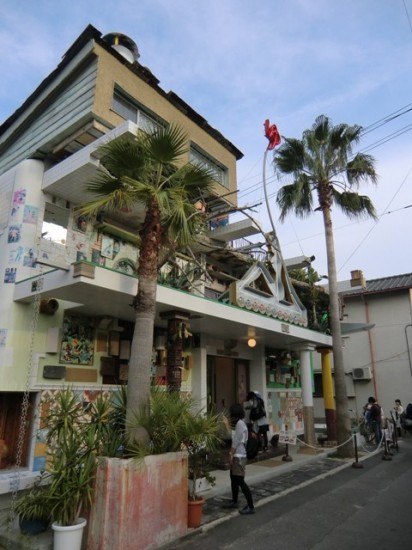 Earlier, I criticized Mr. Ohtake for not caring enough about the “island” dimension of his works. Now, I need to ask him to excuse me, because this is what he did there. He restored an old Japanese bath house into a piece of art that is also a fully functioning Onsen that islanders and visitors alike can use. 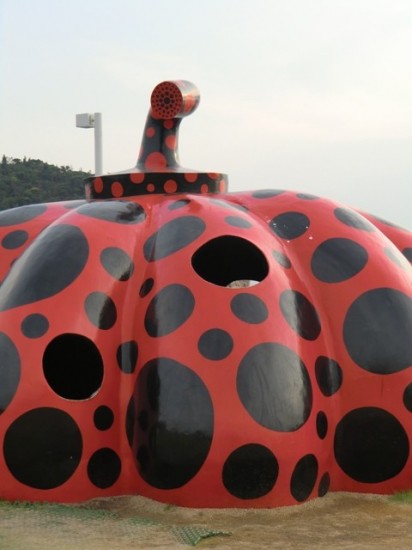 And we conclude this first post about Naoshima with Yayoi Kusama’s second pumpkin, the red one with holes in it…