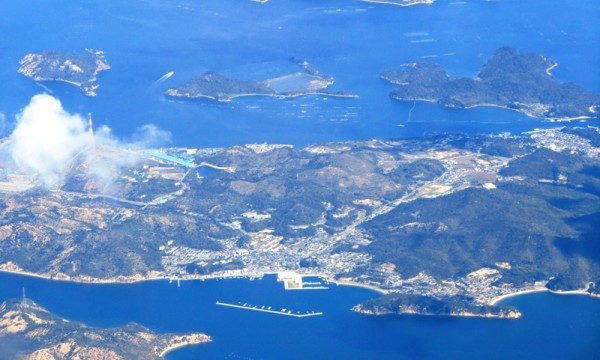 If you’re not too familiar with Naoshima, maybe it’s time for a small geography lesson. 🙂

First, the picture is oriented with the North on the left (and thus, South is on the right, East to the top, and West to the bottom).

Let’s start with the North, where you can guess behind the cloud the least known part of the island, which is its industrial side. When one thinks of Naoshima, one thinks art, however, most people forget (or simply ignore) that there is also a big part of the island devoted to industry with its big plant (I think it’s a copper refinery but I may need to double check).

At the bottom of the picture, this is the village and port of Miyanoura, where you’ll most likely arrive first when you travel to Naoshima. If you have good eyes, know where to look and look at the picture full size, you may see a few red pixels that are Yayoi Kusama’s Red Pumpkin.

On the other side of the island, on the “east coast”, on the right of the picture you can see the village of Honmura where the Art House Project can be found.

Unfortunately, we can’t see the south side of the island, where the Benesse Art Site is.

Right next to Honmura (at swimming distance really) is the island of Mukaijima, that houses about 20 people as well as Tadashi Kawamata’s workshop.

The island right to the North (left) of Mukaijima is Ieshima. It’s unpopulated but weren’t always, and the sort of pool you can see is actually an abandoned salt evaporation pond. I’d like to visit it one of those days, although to be able to do so, you need your own boat. This is where Christian Boltanski originally wanted to built his Archives du Coeur. I guess the fact that it wouldn’t be really accessible is what changed his mind.

Unfortunately, I don’t know anything about the two other islands in the North of Naoshima.