Last Day of the Setouchi Triennale 2013 on Ogijima

Monday was the last day of the Setouchi Triennale 2013. Of course, I went to spend the day on Ogijima.

Here are a few pictures and anecdotes from that day. 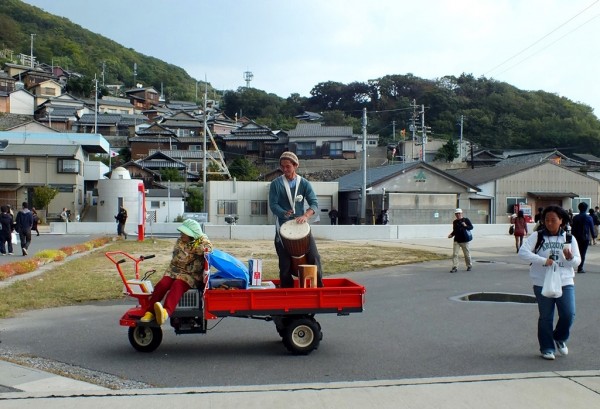 Almost every time I go to Ogijima – especially during the Setouchi Triennale – as soon as I step off the ferry – it feels like I arrived in another world. A world were everyone is nicer, more relaxed, where everyone is welcome. This was the case this Monday too, especially thanks to this very fun welcoming committee. 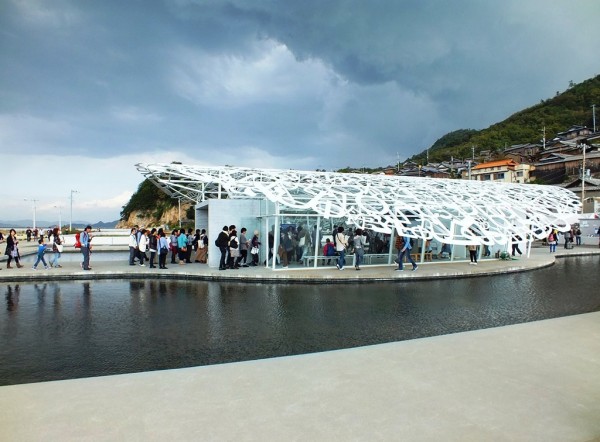 Of course, one big difference between days when the festival is on and days when it’s not – especially as it was the end of the festival – is that the island is much much more crowded than usual.

We also had a small unexpected surprise in the form of heavy rain suddenly coming out of nowhere for about half an hour or so. So we took refuge at Shima Table, and we weren’t the only ones: 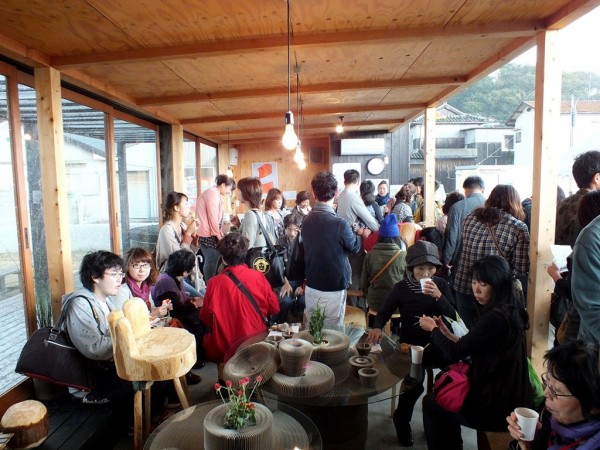 That allowed me to admire some pretty cool designed objects that were exhibited there. I don’t know the details but I assume it was made by the same people who made Shima Table (although I don’t really know): 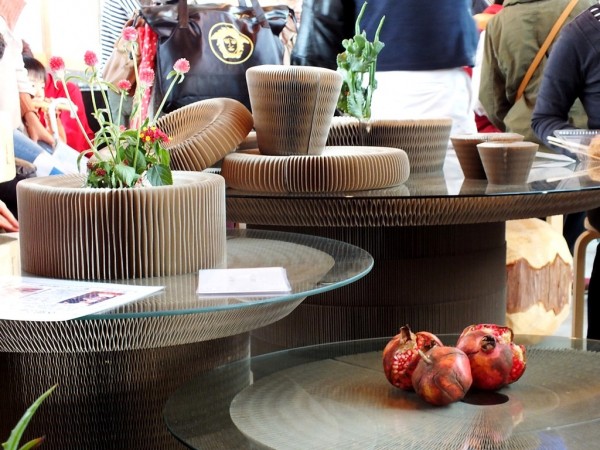 Our welcoming committee from earlier was there too and played a mini-concert for us. He also allowed Hana to try his xylophone while he played tambourine! 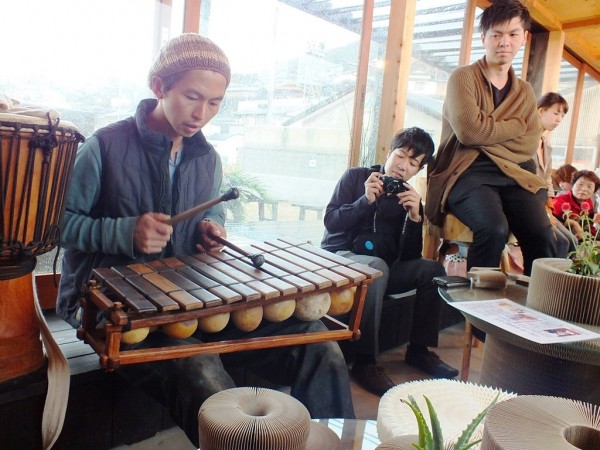 And as the market was just right next to Shima Table, I also ate some of the local specialties for lunch: 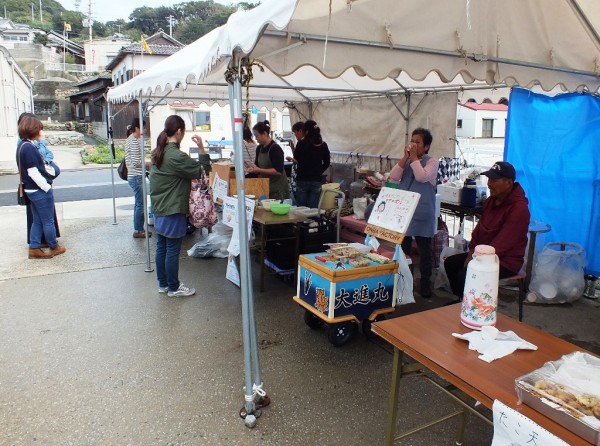 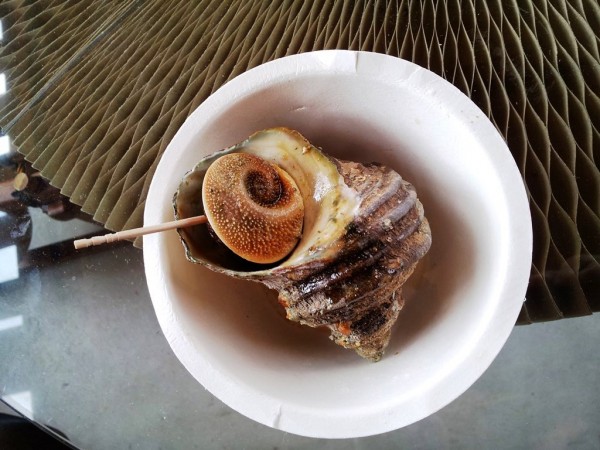 When the rain ceased, we went on for a stroll in the village and see for the last time some of the artworks that won’t be permanent (and enjoy again some that are too). Pictures will show up sooner or later in future posts. 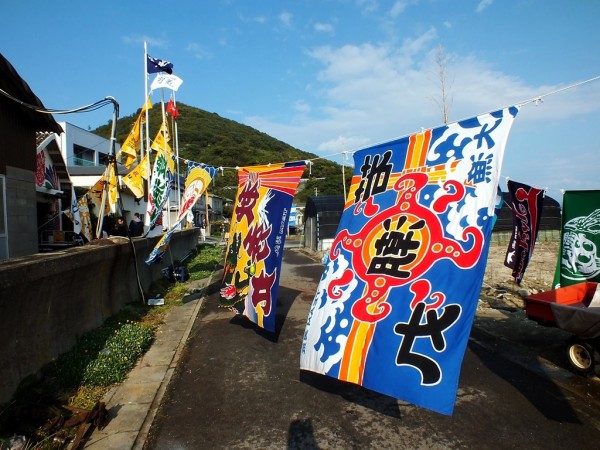 All of Team Ogi’s flags were out of for the occasion, that is in front of the workshop as you can see, but also every flag that they have made for the local population and that are now floating above most of the island’s houses.

But soon, the time for the last ferry approached (I can’t wait for the day when I won’t have to mind it). As you already know if you’re a regular reader of the blog or if you’ve taken that last ferry during the festival, one of the most pleasant “traditions” on Ogijima during the festival is that usually, the artists who are on the island that day come down to the port to wave goodbye to the last departing visitors. This time, the event had a very special atmosphere as it was the last time before long it would happen (and possibly the very last time to some artists).

On a sidenote, about the artists, when one thinks about such a large art festival, one can be tempted to think that the artists are pretty much unapproachable. Nothing is further from the truth. As not all of them are, most of them are very friendly and are glad to talk with you about their art or anything else. Most of them, especially the ones who are on site, do care about the community where they have placed their art and they are willing to meet the community and the visitors. Up to now, while not all of them have responded to my interview requests in the past few months, all of the artists that I have encountered on the islands were more than friendly, the only problem being usually the language barrier (and it’s high time to do something about that don’t you think?).

On Monday, these are Tsuyoshi Ozawa, Hiroyuki Matsukage, Makoto Aida, Parco Kinoshita et Sumihisa Arima (that is the entire Group 1965 minus Oscar Oiwa), Takashi Nishibori, Sayaka Ishizuka, Yoshifumi Oshima and Team Ogi who were present. I hope I didn’t forget anyone. (I also ran into Susumu Kinoshita at Onba Factory, but he was there as a visitor – his art is on Teshima).

One small anecdote: shortly before boarding the ferry, I was chatting with Takashi Nishibori and his friend whom I hadn’t seen since the last day of Bengal Island last summer, as we were talking about the amusing fact that Hana “speaks” Japanese (well, she doesn’t really speak yet) and I didn’t, a man who was in the group of people present at the moment suddenly asked me if I was David from www.setouchiexplorer.com! Even more interesting, I found out later that he was the father of one of the three families that are currently moving to Ogijima.

Yes, this is the current important news on Ogijima; three families are moving to the island, and as a very significant consequence, the school will reopen in April! From the distance, or if you’re definitely an urban person, you may not get the significance of the whole thing, but believe me, it is very important. It means, that it’s working, the revitalization is working! I’ll give you more details as I get them.

Another funny anecdote: a dozen minutes or so after being back in Takamatsu, as we were in a konbin at Sunport, I ran into Parco Kinoshita (the artists also returned to Takamatsu for the closing ceremony, they just took another boat that had been dispatched for them). We exchanged a few words and he asked 康代 to take a picture of Hana, him and me… I hope I can get a copy of this picture one day (unfortunately, I don’t have Mr. Kinoshita’s contact beyond his twitter handle – that could be enough). Also, I couldn’t see the film that Makoto Aida shot on the island this summer (it was shown on Sunday, I was on Shōdoshima). I briefly appear in it, when one of his “aborigines” gave me a welcoming gift as I landed on this island last August.

That’s all for that afternoon’s anecdotes and I’m finishing this post with the ferry’s departure and the farewell to the Setouchi Triennale 2013 on Ogijima: 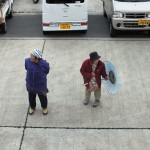 Ogijima’s “bachan” are the first ones ready. 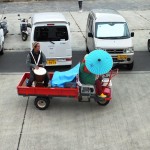 The welcoming committee will also be part of the send off committee. 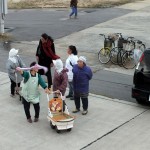 Takashi Nishibori arrives and chat with the local “bachan” 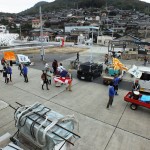 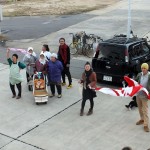 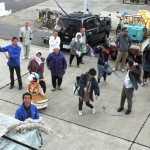 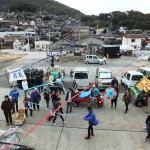 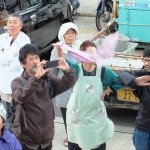 Makoto Aida takes pictures of the event too. 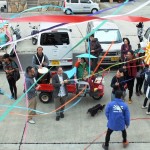 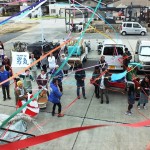 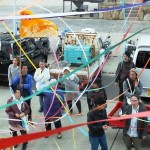 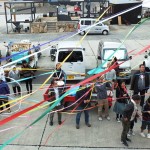 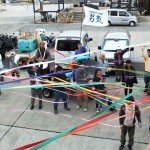 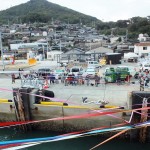 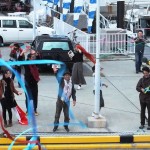 Big thanks to everyone for all those great moments. 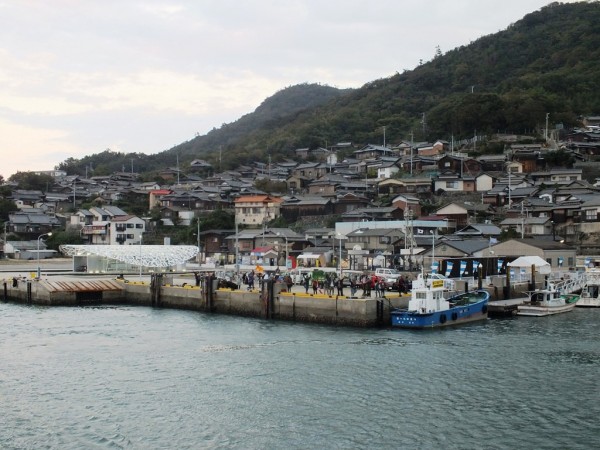 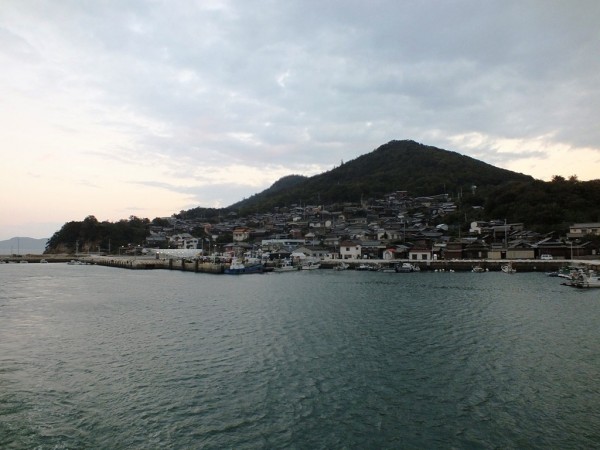 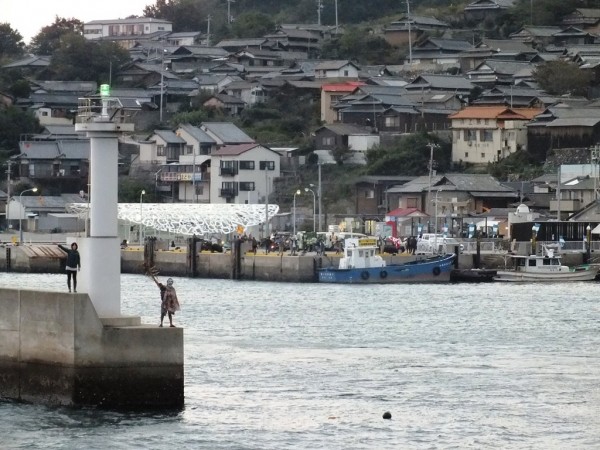 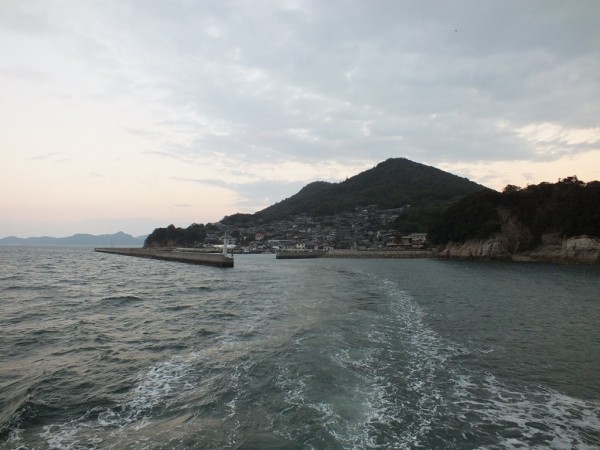 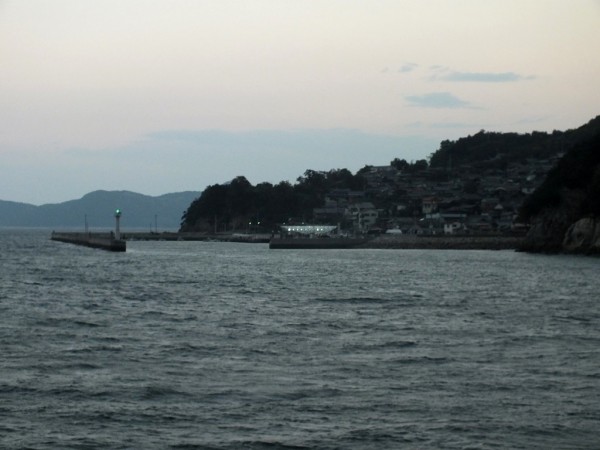 And just like that, the Setouchi Triennale 2013 ended on Ogijima…

(there was one final episode to tell… coming soon)