After visiting Okayama Castle, the next logical thing to do is usually to go visit the Kōrakuen, the garden, located on the other side of the Asahigawa. It originally was the Castle’s garden – or rather the Daimyō’s – but it is now Okayama’s garden.

It is considered as one of the Three Great Gardens of Japan, which is more of a honorific title than a ranking or something (just like the Three Views of Japan).

A few lines about its history (taken directly from the flyer that was given to me – although it was surprisingly in French, so the following paragraph is a translation from French of a text that was most likely originally translated from Japanese) :

In 1687, Tsunamasa Ikeda, Okayama’s Daimyō, asked to his vassal, Nagatada Tsuda to build him a garden. Construction lasted until 1700 and the garden managed to keep its original appearance until nowadays without much change at all. Actually, we have a lot of details about the garden’t history because a lot of blueprints for the garden survived until today as well as the Ikeda family’s archives. Kōrakuen was originally used by the Daimyō and his family only, as well as their guests; however, the people from the city could visit it too for certain special dates. The garden was given to the Okayama Prefecture in 1884 and has been public ever since. The flood of 1934 and the American bombings of the city in 1945 badly damaged the garden, but it was possible to restore it in its original shape thanks to the blueprint from the Edo Period. In 1952, the Kōrakuen was declared “Special Scenic Location.” Since that date, it is conserved and managed as a cultural and historical property destined for future generations.

(and then I realize that it is the text of wikipedia pretty much word for word – so we can safely guess where it comes from, the English version of the garden’s official leaflet)

Let’s talk a little bit about the name, Kōrakuen. Here too, my main source is the leaflet that is definitely full of information.
Usually, that type of garden is called “kō-en“, which pretty much means “back garden”, as it is a garden that is located in the back of the castle. However, because this garden was built according to a “Sen-yu-kō-raku” state of mind (that is the leader must take care and worry about others first and himself last) its named was changed to “kō-raku-en” in 1871.

The (artificial) springs of the stream that runs in the garden before finishing its course in the Asahigawa.

Of course there cannot be a Japanese garden without a few Koi in the ponds. 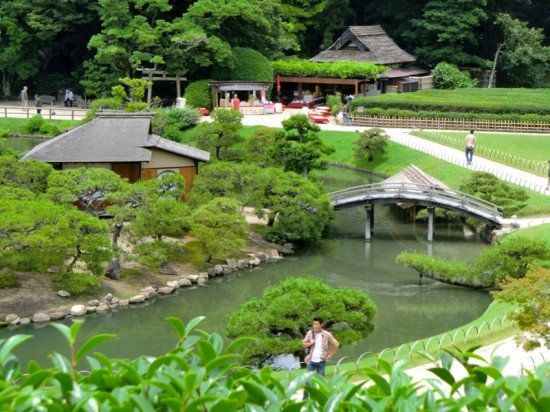 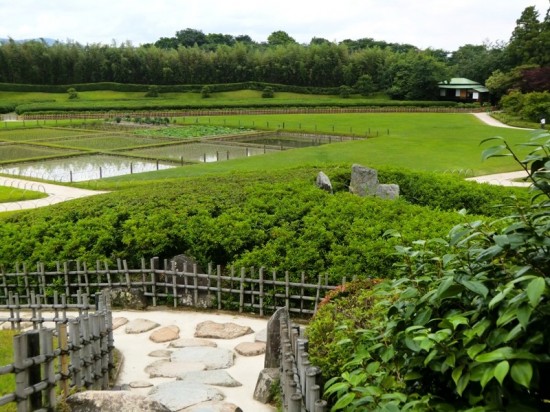 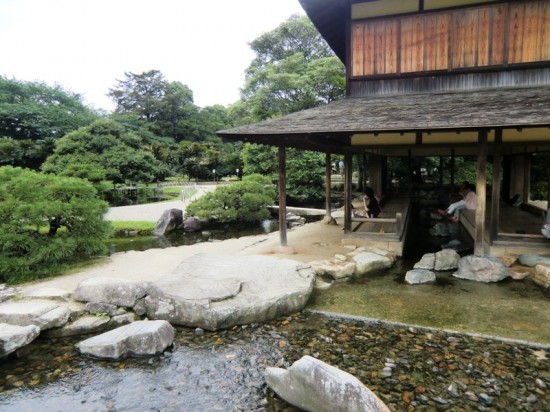 The Ryūten is a rare building in Japan. As you can see, the garden’s stream runs through the pavilion. It is the perfect place to rest, and even though it was not designed with that goal in mind, one can even freshen up ones feet there.

This tiny hill is the Yuishinzan, and it dominates the whole Kōrakuen. The view from the top is wonderful, and that despite the fact that it is only six meters high above the rest of the garden. 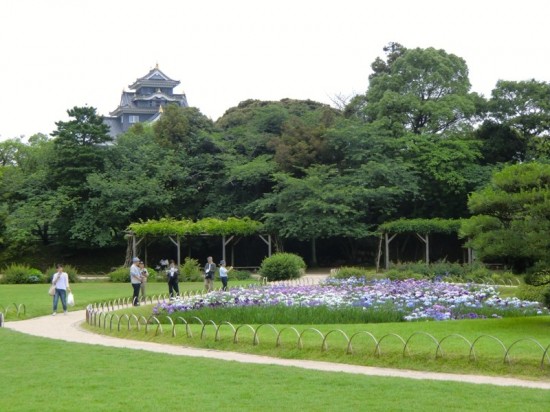 We’re slowly reaching the end of this virtual visit. Please note that I haven’t taken pictures of everything, there are many more things, including a Nō Theater, a few Japanese cranes (unfortunately kept in cages, although it makes sense) and a few more surprises for you when you go there. 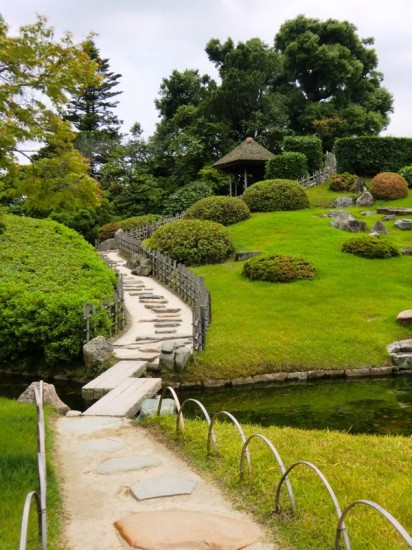 Let’s end this post with a tough question. I really loved the Kōrakuen, but did it replace the Ritsurin-koen as my favorite garden in Japan?

However, it is pretty hard to compare both (the same way it is pretty hard to compare the Ritsurin-koen with the many gardens of Kyōto). The Kōrakuen is splendid, but its atmosphere is very different from the Ritsurin’s. Where Kōrakuen has large open spaces, Ritsurin is more about small spaces (except for a few exceptions) that you discover one after the other at every new turn.

And in the end, why choose? Why don’t you go visit both the Ritsurin-koen and the Kōrakuen?