I meant to write this post months ago, but apparently I always postponed it. Not anymore!

I have already told you about the Red Pumpkin that one can find on Naoshima, but we all know that the more important one is the Yellow Pumpkin! 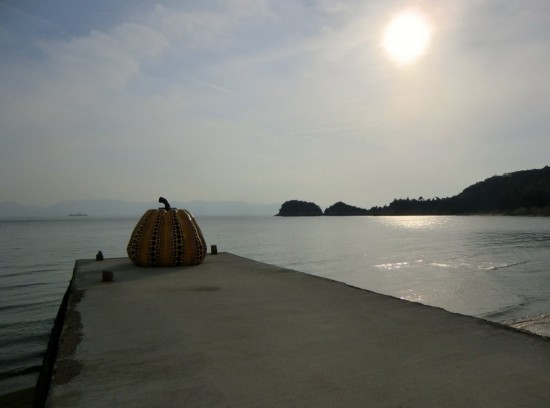 You most likely already know that it is the work of Yayoi Kusama. It has been on this pier on Naoshima’s South Beach since 1994 and since then, it has become the almost official symbol of the island as well of Benesse Art Site Naoshima. Even during the Setouchi International Art Festival 2010, even though Yellow Pumpkin was not officially one of the artworks of the Festival, it was the piece of art on the cover of the Festival’s guide/catalog.

Today, it is certainly the most famous Japanese contemporary artwork. I know I have the tendency to be quite critical of many famous things, but I really advise you to see this pumpkin with your own eyes if you haven’t done so already. If you’re a regular reader, you know what I think of the importance of art outside of museums, in the “real world”, and somehow this pumpkin is the perfect symbol of that thought. I can imagine it in an empty room surrounded by paintings. It would simply be a big plastic pumpkin with black dots on it (well, I’m not sure it’s made of plastic, but you get the idea). And the view from the beach would nice for sure, but not special the way it is now. It really is the association, the synergy of the two that makes this spot so unique and wonderful. 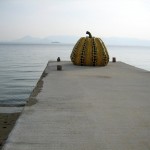 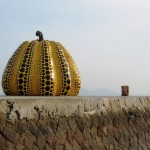 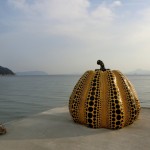 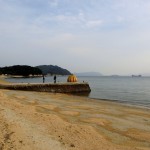 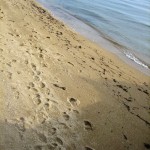 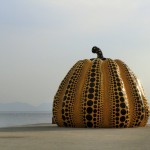 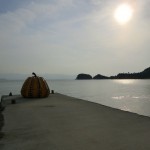 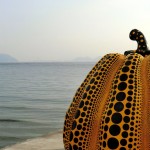 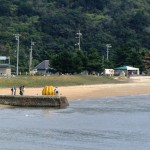 And with that being said, it is time for me to say “See you later!”

We are flying tomorrow to Takamatsu, well, if Air France lets us, as they’re on strike (as usual). However, it seems that our flight is not cancelled and in any case, we’re just flying from Bordeaux to Paris with them, the rest of the trip (Paris-Seoul-Takamatsu will be done with Asiana Airlines). Knock on wood.

I’ll resume the blog as soon as possible, but I will be more or less without an internet connection for a few weeks except for some trips to the local internet café.

However, there are good chances that I will get a smartphone pretty soon. I’m not that much into those gadgets (nope, I’ve never owned one, just a basic cell phone, one that makes phone calls, sends text messages and that’s it), but apparently one cannot really survive in Japan without one of those things. So I may be online on a smart phone sooner than expected. In any case, follow me on Twitter, Facebook and Google+ if you don’t do so already (if you follow me on Google+ do not hesitate to drop me a line so that I know in what circle to put you).

Don’t expect me to blog from a smartphone, but I may give you some updates or something.