Last June, we ventured a little bit in Okayama Prefecture for a nice day trip there. We started with Okayama city, and more precisely its castle.

And the very first thing that stroke me was that Okayama Castle (Okayama-jō 岡山城) is as black as its famous neighbor, Himeji-jō is white. 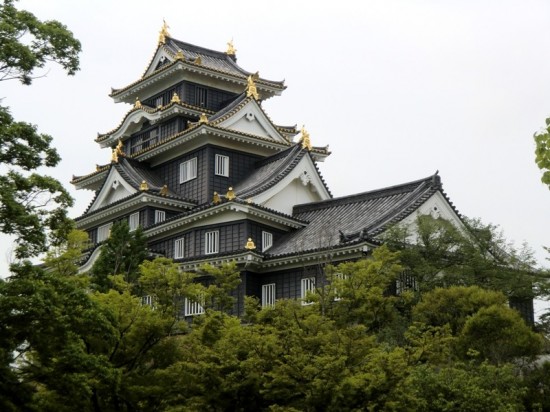 The castle was built between 1573 et 1597 by Naoie Ukita and his won Hideie. The latter had the misfortune to take the wrong side on the Sekigahara Battle. As a consequence he was first captured and later exiled by the Tokugawa clan and the Okayama Castle was given to Hideaki Kobayakawa, less than three years after it was built. However, Kobayakawa didn’t enjoy the castle and the fiefdom for very long as he died two years later with no heir. So, in 1602, the castle was given to the Ikeda clan who kept it until 1869 when Meiji abolished the feodal system.

The castle was lucky enough to endure very little damage during the first three centuries of its existence and it was a pretty good shape in the beginning of the 20th Century.

Unfortunately, luck abandoned it on June 29, 1945 when the American Air Force dumped a few tons of its infamous incendiary bombs on Okayama and the castle was almost entirely razed to the ground (only two turrets survived).

The castle that can be visited today is a replica (mostly made of concrete) that was built in 1966, and which houses a small museum among other things (amazing Samurai armors, many objects and documents from the Edo Period, and unfortunately, at usual, pictures are not allowed). 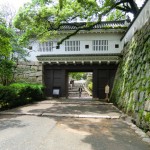 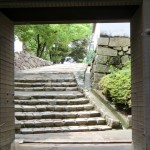 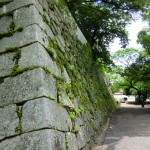 A detail that we often forget (well… I often forget it, I wouldn’t want to speak in your name) is that when we talk about Japanese castles, the Daimyō’s main tower is just one part of the castle, which used to have many other buildings within its walls. However, even if only the main tower has been rebuilt, I thought that a good job had been done at reminding us that the castle used to be much more than that, with signs and lines on the grounds (where other building walls used to be): 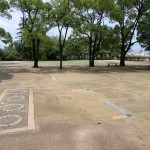 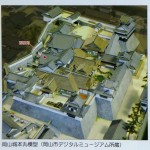 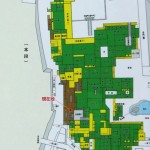 All in all, I don’t have much experience nor knowledge of Japanese castles yet (it will come), and even if the contemporary interior of rebuilt castles is something that can be quite unsettling (see my recent post about rebuilding castles in Japan on the topic), I think it’s always an interesting and enriching experience to visit them (yes, even the ones rebuilt with concrete), and I can’t stop being surprised by how similar Japanese and European feudalism were.

In any case, if you’re in the area (for example because you’re going through Okayama on your way to Shikoku 😉 ) I warmly advise you to visit Okayama Castle (especially because it’s not the only thing of interest in the neighborhood as you’ll see soon). 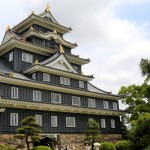 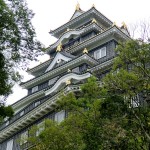 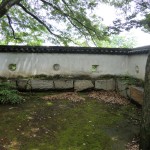 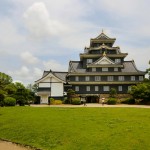 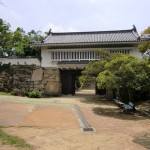 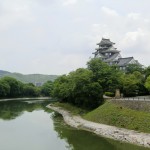 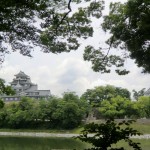 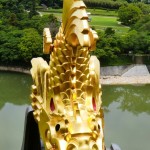