Barely more than a kilometer after leaving Ryozen-ji, pilgrims on the Shikoku Pilgrimage will encounter their first stop, Gokuraku-ji.

There’s some excitation arriving there. This time, it’s for real, the pilgrimage is underway, it’s too late to change one’s mind. This is the second temple, one has now become a real pilgrim, an ohenro-san, not just a mere traveler. The countdown has started, only 86 temples left.

Just like Ryozen-ji, Gokuraku-ji is said to have been founded by the monk Gyoki, and it is said that it’s Kobo-Daishi himself who has sculpted the statue of Amida Nyorai, the temple’s main sacred artifact. As usual with ancient history in Japan, facts and legends get easily mixed up and I can’t confirm nor deny that this is true. 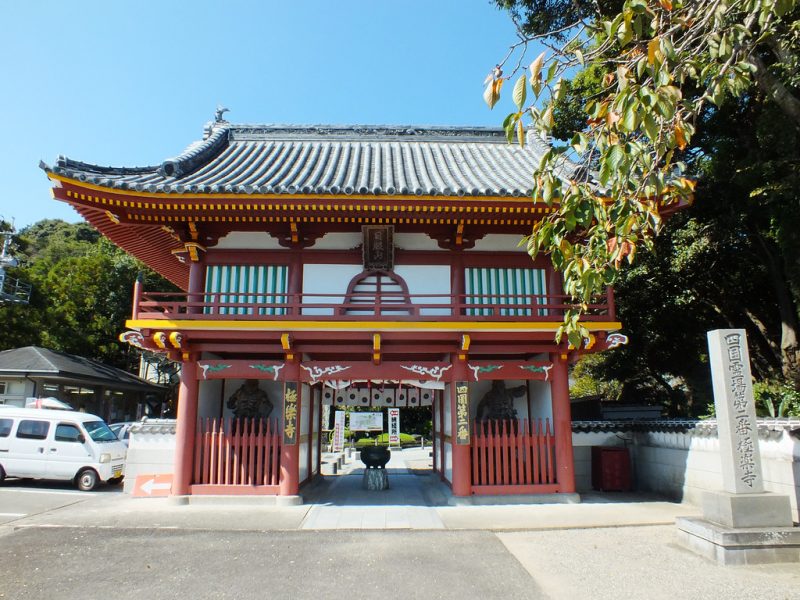 As usual, the two Nio are guarding the entrance of the temple. Beware if you have bad intentions.

The temple is more or less divided in two parts, one part at the foot of a small hill, where lies a beautiful garden. The second part being on the side of the hill.

Among the many legends associated with Gokuraku-ji, one is of a woman who couldn’t have children as she always had miscarriages. It is said that as she was walking the Henro pilgrimage in the reverse direction (don’t forget that it is a thing), she finally gave birth as she arrived at Gokuraku-ji. Since that day, it is also a place where pregnant women go to have a safe and healthy pregnancy. (and so, if the legend is true, she walked the pilgrimage as she was 7-8 months pregnant !)

Even if you don’t care about the Shikoku Pilgrimage, if you go through the city of Naruto, in the Tokushima Prefecture, I advise you to visit this temple, if only for its wonderful garden.