One of my favorite Japanese dish is Unagi (鰻) in other terms, Eel.

If you’ve been to Japan before, you certainly know what I’m talking about. If not, I can only advise you to give it a try. You don’t even need to go to Japan for that, as the first time I had Unagi was in the US actually.

However, in Japan, Unagi is served in Unagi-ya aka Unagi Restaurants.

The first time I went in one in Japan, it was there. What surprised and amused me the most that day was that despite the fact that Unagi was pretty much the only thing that was being served in the restaurant, there were a good dozen of different dishes. All of them serving Unagi, but at different prices, and as far as I could tell that was pretty much the only difference from one dish to the other.

Last Fall was only my second time in an Unagi-ya, but this time I understood what was going on! The differences from one dish to the other are subtle but real. What change are things like the number or the size of eel fillets, whether they’re served on top of rice or with rice on the side, what other side dishes come with them, etc.

One Japanese mystery down!

That time, this is what I ate: 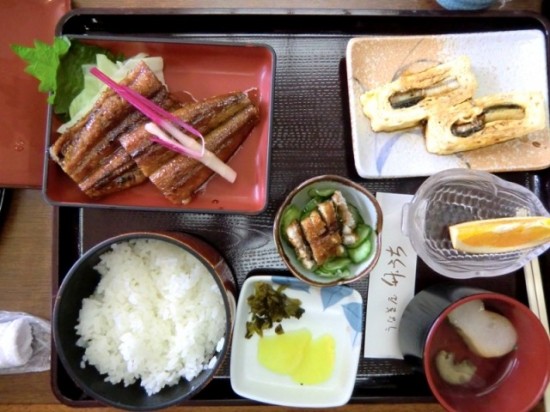 From left to right:

-Two Unagi fillets with a piece of ginger. It’s the Kabayaki, grilled eel with sweet Shōyu.
I’m tempted to add that this is the “usual” way to eat Unagi.
-Then we have omelette with more Unagi in the middle. It’s called Umaki.
-In the middle we have Uzaku, that is cucumber and Unagi salad, and it is delicious.
-I don’t think to explain the orange, the rice, the pickled vegetables and the soup…

I will end this brief post with a small quiz. Of course I’ll need to ask readers who already know Japan and the answer to wait at least a few days to give their answer, so that people who don’t know can give it a shot first. Let’s say three days. If in three days nobody has found, it’s free-for-all, anybody can answer. Sounds fair? 😉

Look at this picture:

You recognize the soup from the first picture.

The big thing on the top right is called Fu something made from wheat,
gluten basically.

However, what I care about right now is the other thing, at the bottom of the picture.

What do you think it is?