On August 18, the Bengal Island project was almost a month old. The place has now become very familiar and I’m starting to have my habits there. There are certain booths where I could spend hours, some others where I rarely stop. I can’t help but notice that it’s pretty much the same for the “residents”, depending on the location of their booth and on affinities, some bonds and friendships have been born. It’s a small community – almost a village – that lives in Takamatsu Sunport during this summer. However, we are approaching the last stretch, as I type these lines, Bengal Island has only 9 days left, then it’ll all be over. No, not all. The bonds that were born during those 41 days will last a long time, some memories will never fade. But before talking about the end of that unique moment, let’s enjoy some pictures from August 18: 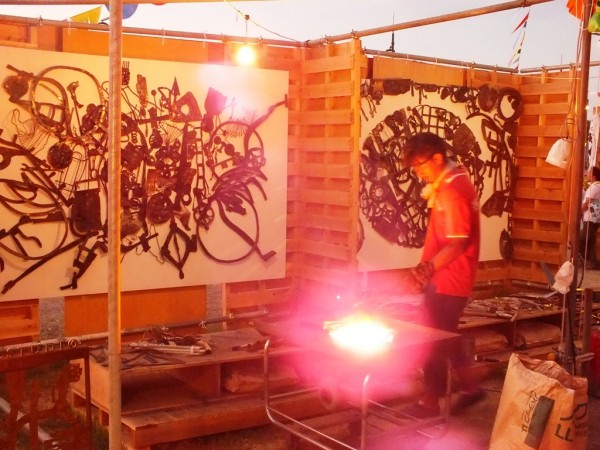 Atsushi Ozawa at work.
Notice the wall behind him and compare to the pictures in previous posts about Bengal Island. 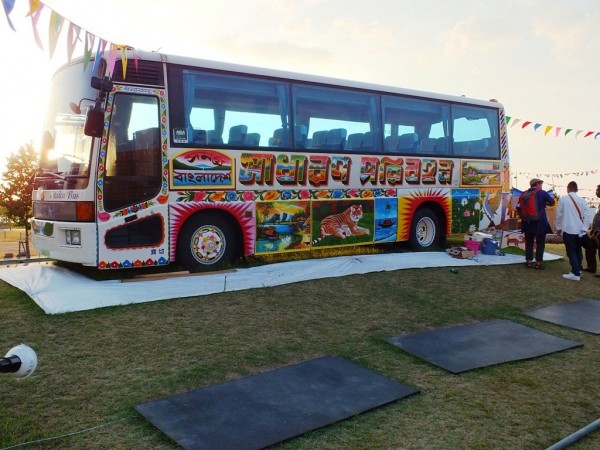 Debu Achargg is almost done with the bus. 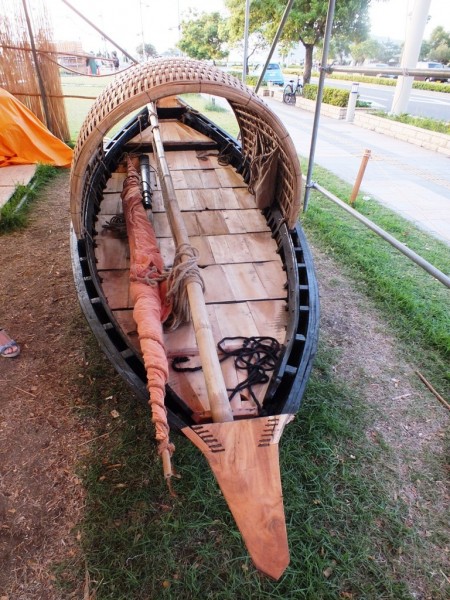 The dinghy is finished!
It was launched on that same day, in the morning (this will be the topic of a future post). 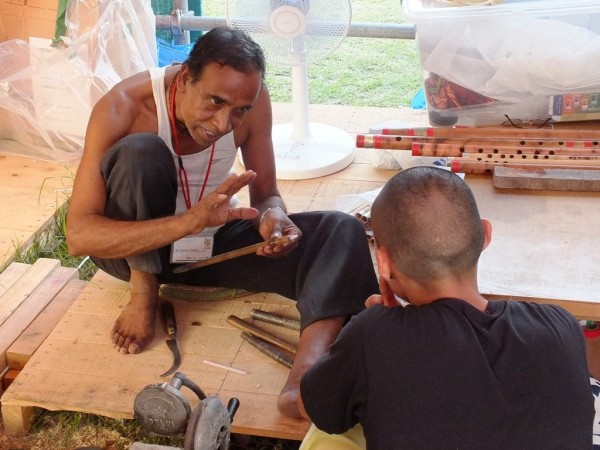 Kamol Sarker talks about his flutes to a visitor. 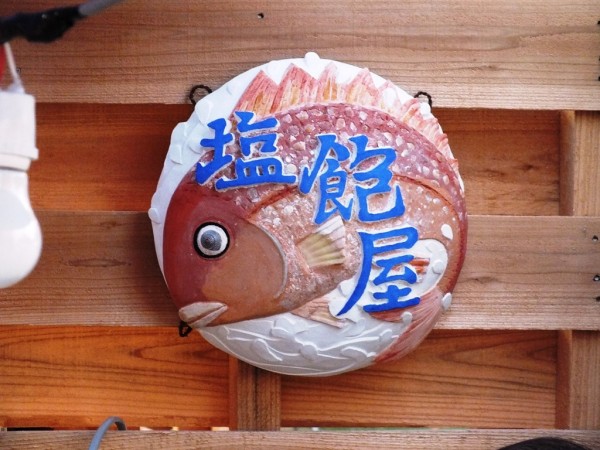 There are still a few booths at Bengal Island that I haven’t mentioned for various reasons (mostly the absence of good pictures). Among them, Plaster Relief Studio by Kazuko Murao. Until now, it only looked like a workshop and there wasn’t much to see and show you. Some plaster reliefs are now on display. Like many workshops and projects by Japanese artists at Bengal Island, there is a link with a Setouchi Triennale work by the same artist somewhere on an island. I couldn’t figure out what work this workshop linked to until I saw the next relief. The thing is that Kazuko Murao’s work is not available yet, as it’s going to be this coming october on Honjima. 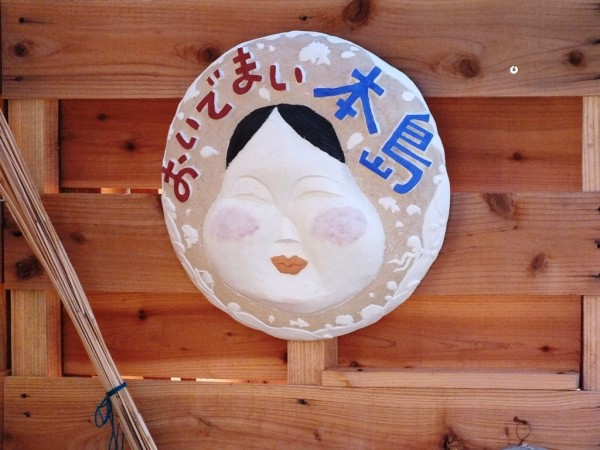 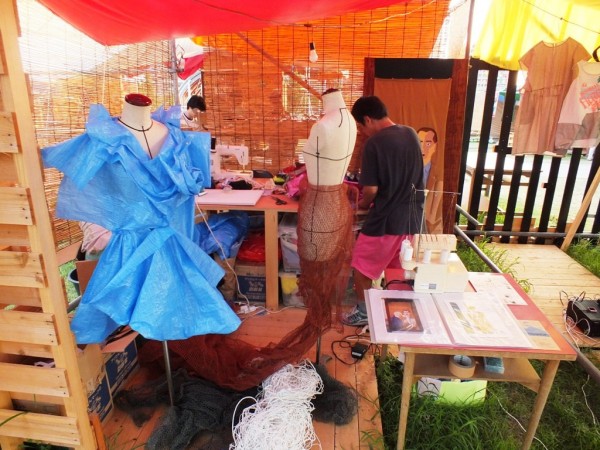 I haven’t told you much about 山Pottoshop either.Once again, not much to shoot. This project by Tetsuya Yamamoto deals with clothing design (here you can see a dress made of tarp, another one made of fishing nets) but I’m not sure I fully understand what this is about. I think it’s also linked to an event that will take place in Takamatsu in october. 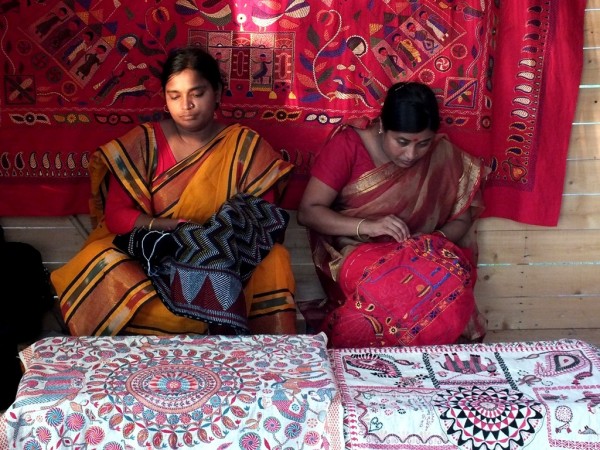 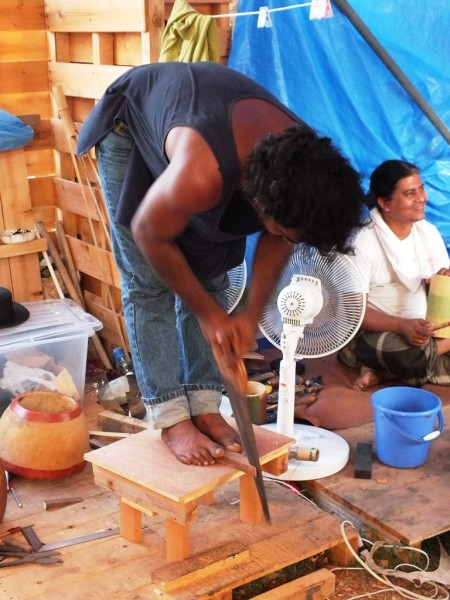 I always show you Shariful Islam playing music, but don’t get him wrong,
he does make music instruments too. 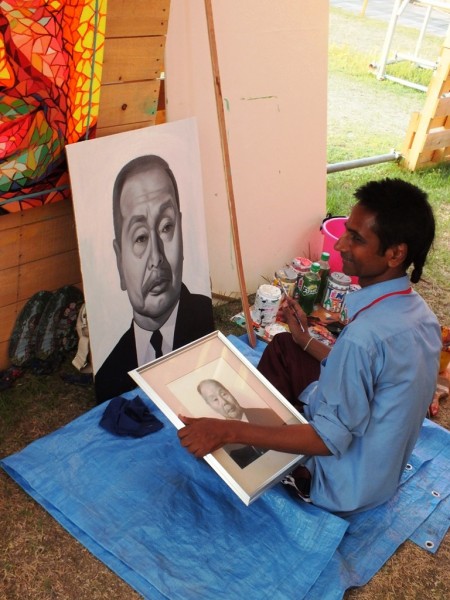 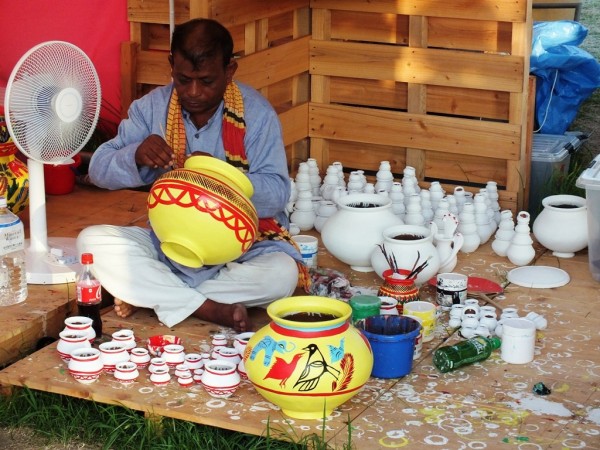 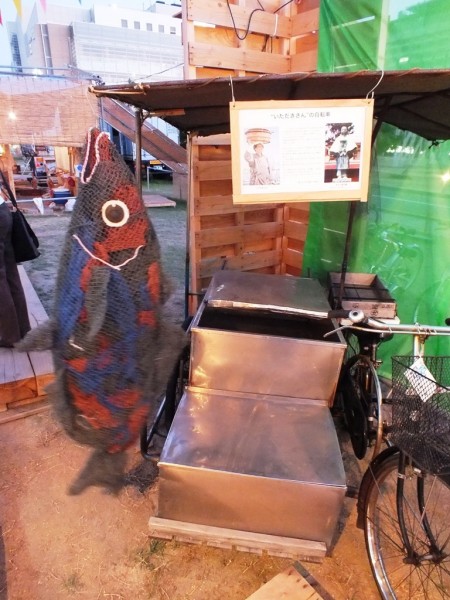 I was wondering why this itadakisan bicycle had been parked there for the whole month. It was part of Skin Project, and it now has a nice fish made of fishing nets with it. 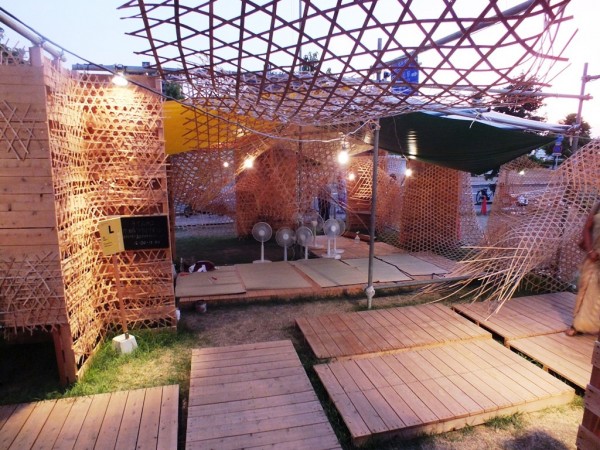 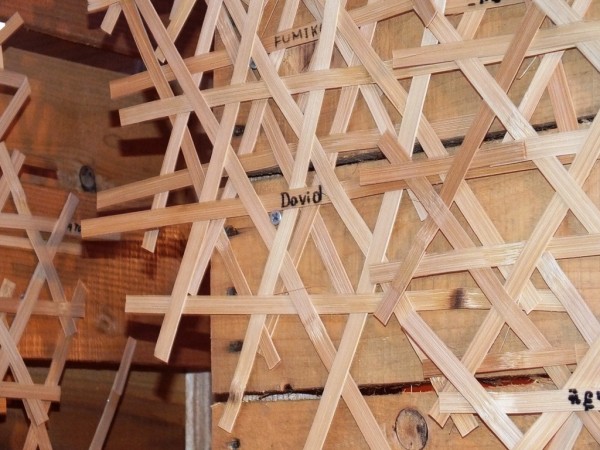 To give you an idea of the atmosphere that you can find at Bengal Island: as soon as we got to Weaving Weaving, one of the Thai students who work on the project (and here, I realize that I don’t know any of their names) comes to see us and shows us my “masterpiece” made the previous week. Not only he had installed it in a very visible spot, but he clearly remembered where he had put it among many dozens. I was touched, obviously. 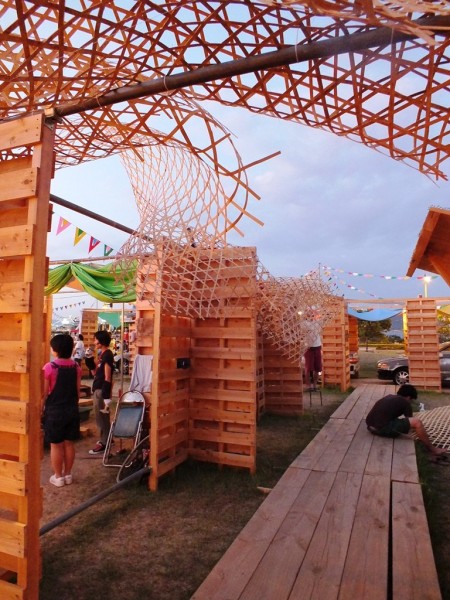 And we’re ending this seventh visit to Bengal Island with a video. The good news is that Takashi Nishibori accepted to tell us in length about Weaving Weaving, Corridor of Time and Ogijima! The bad news is that because of the concert that was taking place nearby and Atsushi Ozawa’s forge was right behind and not exactly a quiet place, the sound is very bad and it’s not always easy to hear and understand what Mr. Nishibori says. Sorry about that.

previousTraditional Japanese Boat Building at Bengal Island
nextSunset House: Language as the house of Being by James Jack