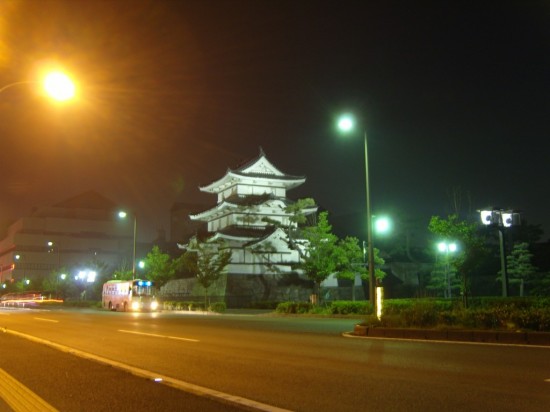 At least part of the Takamatsu castle. If I’m not wrong, it’s the Tsukimi Yagura (Moon Viewing Turret), well, it’s the one next to the road between the castle and the port.

Recently, I heard of two people who visited Takamatsu and didn’t go to Tamamo Park (the castle’s grounds) because they’ve heard that the castle is only ruins.

Thing is that while the castle’s main tower has been long gone (about 150 years), the park is definitely worth a visit. First, because the park itself, while relatively small is interesting, but in the middle of that park, there’s a very interesting building, the Hiunkaku, which dates from 1917, but was built in traditional style. It used as the Kagawa governor’s office, and today it is used for various cultural events. For example, last time I went, we learned about Wasanbon (Shikoku sugar).

Oh, and if you don’t plan on going to Takamatsu before a few years, know that the main tower is currently being rebuilt and should be open in one or two years.

4 thoughts on “Takamatsu Castle at Night”