Here is a piece that contemporary art snobs won’t like at all. I’m thinking the kind one can often run into in certain streets of Paris for instance (3rd and 6th arrondissements for those who know the city). I assume it’ll be pretty much the same with their New-Yorker or “Miami-an” counterparts.
First, the setting would be way too rural for them. Hard to do more rural indeed as this artwork is the first of a series located right in the heart of Shōdoshima, not only outdoors, but really in the middle of nowhere, that is the rice paddies in the valley between Hitoyama and Nakayama, two little villages lost in the very middle of the island!
Then, the art itself, Straw Art (わらアート) is not based on any dubious concept whatsoever as it’s simply – just as the name states – art made from straw. However, it’s not any kind of straw, as it is rice straw coming from the harvest of local paddies which was performed before the Setouchi International Art Festival kicked off. Also, it’s not a world renowned artist that did it, but students from Musashino Art University. Sure, it is one of the best art university of Japan, but it doesn’t remove the fact that they’re only students and they’re unknown. Not a place for name-dropping lovers. 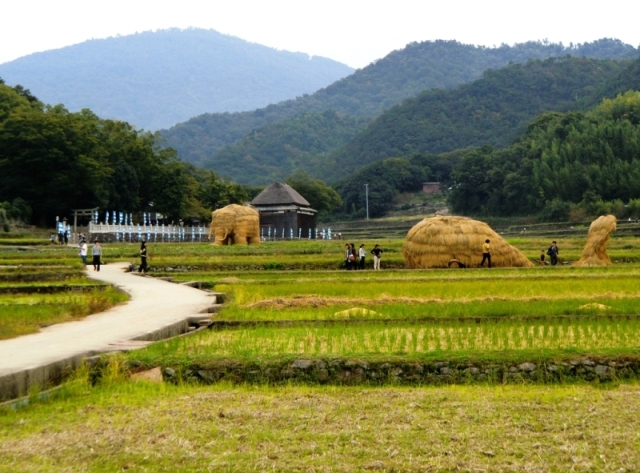 So, to summarize, we were in the middle of nowhere with an elephant, a whale and a hut, the three of them made of straw by anonymous students! In other words, the world of contemporary art as we know it was light-years away. Too bad for the snobs, but -and maybe because of those very reasons, Straw Art was one of the most pleasant artworks of all the Festival (If I ever was to do a top 10 of my favorite pieces, it would be part of it for sure). It is one of those artworks you wish were permanent installations, of course it was impossible, if only for climatic reasons because of its nature. Actually, the elephant didn’t survive until the end of the Festival, a few days before the end (and a week after I got to see it, it fell because of some wind gusts caused by a nearby typhoon.

I don’t have much to add about those, I’ll let you enjoy the pictures I took:

I’ll finish with a small technical note: as you may have noticed, one of the perks of moving to self hosted wordpress is that I can try new things. What do you guys think of the gallery and the map? Keep them? Ditch them? I’m not too sure about the gallery. I like how it looks, but I know that when I see this type of galleries on some blogs, unless I really care about the topic, I juts look at the thumbnails and rarely take the time to click on them to see the larger picture. What do you think?