A few days ago, I showed you some glimpses of new art being installed on Ogijima for the Setouchi Triennale 2022. Today, I went to Naoshima and I have a few more things to show you.

But first, in Takamatsu Port Terminal, where the Triennale’s headquarters, the main visitor center, and the souvenir shop are located, there was some activity. The shop is being prepared, but also some art was being made. 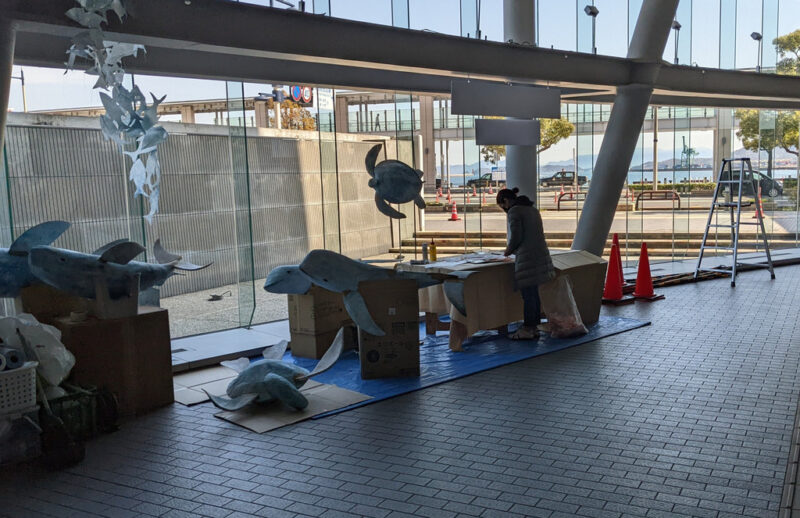 The artwork is called Paper Sea, and it is currently being made by Asaki Oda. I was running late to catch the ferry, so I just asked if I could take pictures and ran. I suddenly realized that Oda-san spoke in perfect English. Apparently, she’s based in the US. Now, I feel bad not stopping longer and chat (I would have missed my ferry). 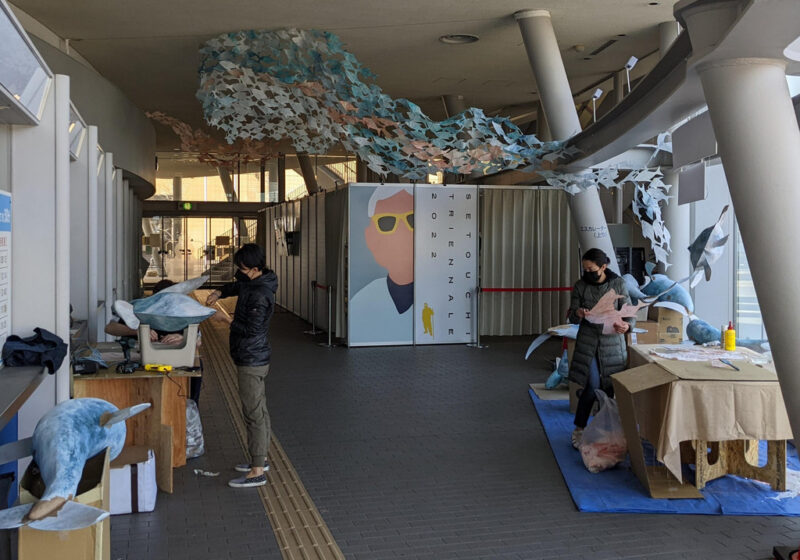 Asaki Oda is on the left.

So, yes, I hopped on the ferry and reached Naoshima an hour later.

There, Hiroshi Sambuichi is renovating/building a new building as a part of this Naoshima Plan project. It’s an ongoing project that started in 2013 and that aims at renovating and “updating” numerous traditional buildings on Naoshima. It already gave us Naoshima Hall and Water (as well as some private houses). This one should be called something along the lines of Dwelling. (Housing? Something like that. Its official English name hasn’t been made public yet. It’s 住 in Japanese. 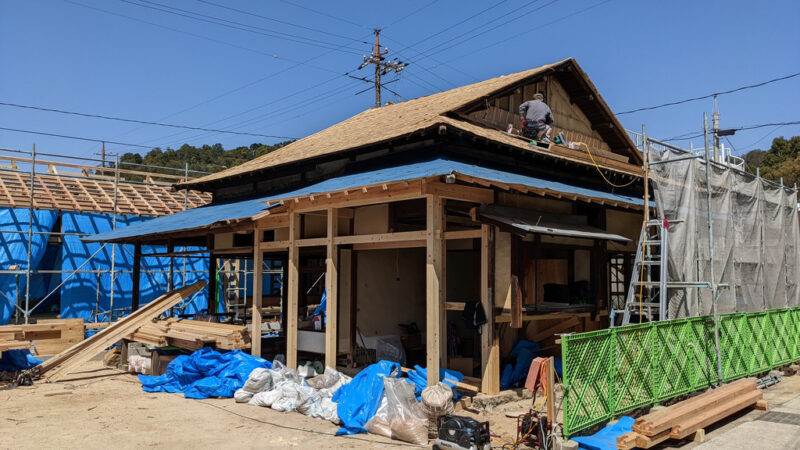 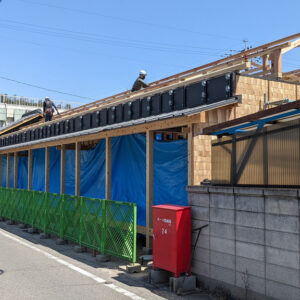 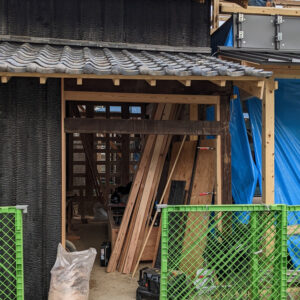 I was wondering if it could be ready in a week, and it may. They are working very fast. I saw a picture of the building last week, and a lot of progress has been made since. Also, if I understand properly, the house will be ready in the Spring, but in an unfinished state. Then, there will be more construction, and it will be complete only in the Fall. We’ll see what it’ll be like. 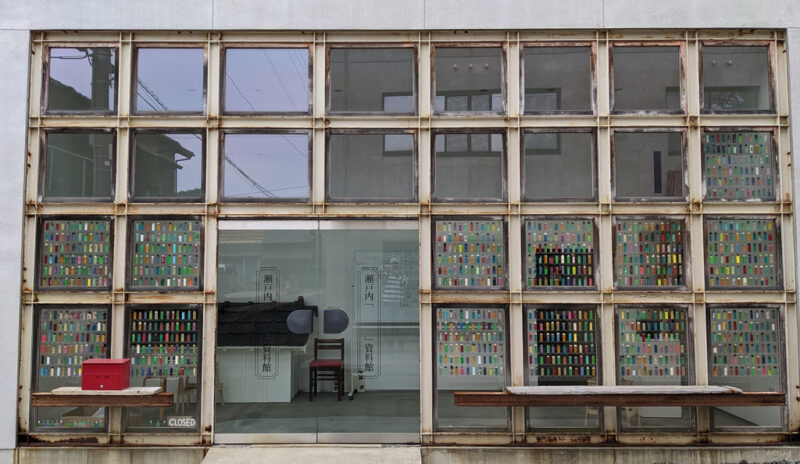 In Miyanoura Gallery 6, also called Setouchi ” ” Archive, Motoyuki Shitamichi is also preparing his new archiving project (I want to make up a new word for what it does, “artchiving.”) I’m not sure what it’s going to be about, but seeing what’s happening to the front windows of the place, I’m suspecting something. 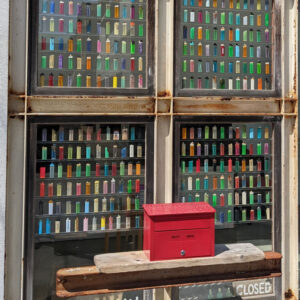 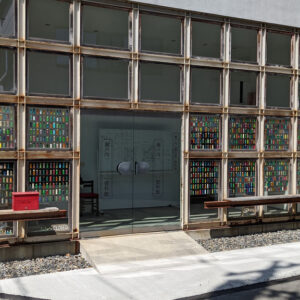 OK, I didn’t only see works that were under construction. Naoshima also has two new art places that opened a few weeks ago, one I mentioned a couple of times already.

I’ll show them to you in more detail soon, but I had to give you today, right? 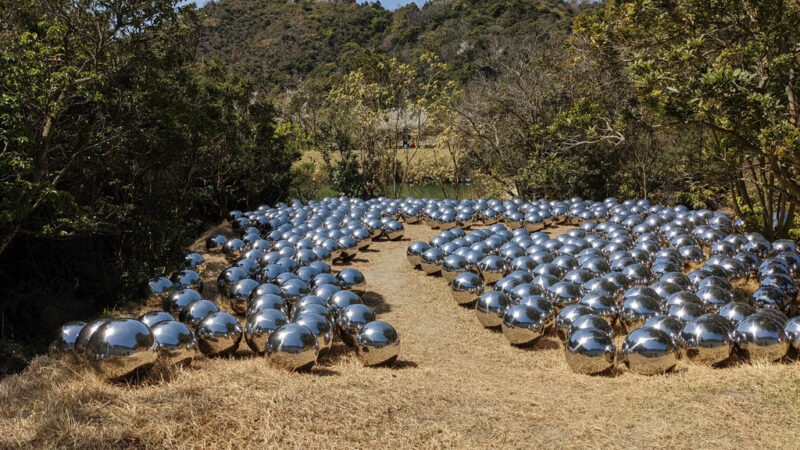 A new building by Tadao Ando, currently housing Narcissus Garden, an old artwork from Yayoi Kusama that has been around since 1966 (it made its debut at the Venice Biennale, in an interesting way: Kusama wasn’t invited, so she crashed the party with these metal ball, basically). 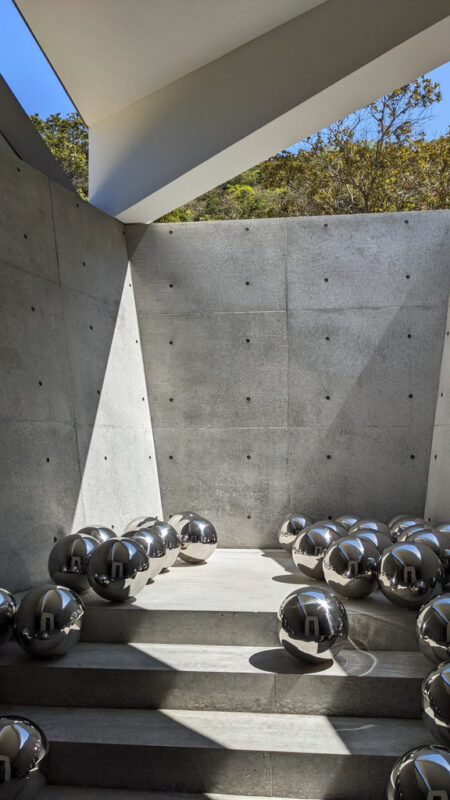 Also, not exactly new, but remodeled, and now open to everyone and not just the Benesse House Hotel guests, the Hiroshi Sugimoto Gallery: Time Corridors, housing different works by Hiroshi Sugimoto including the latest iteration of his Glass Tea House. 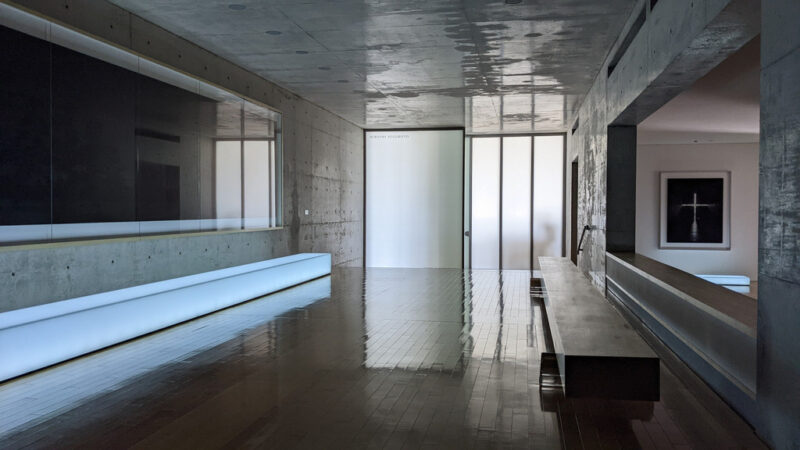 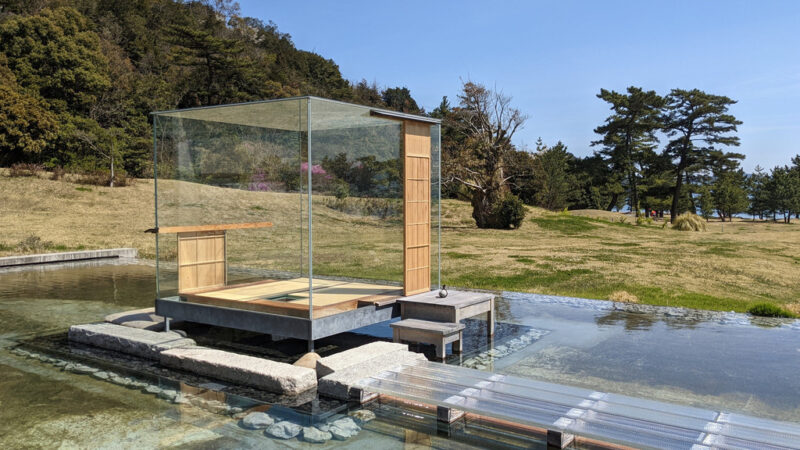 I’ll show you both places in more detail as soon as possible.

I also visited a few well-known places, especially the Art House Project today, but it was soon time to return home. 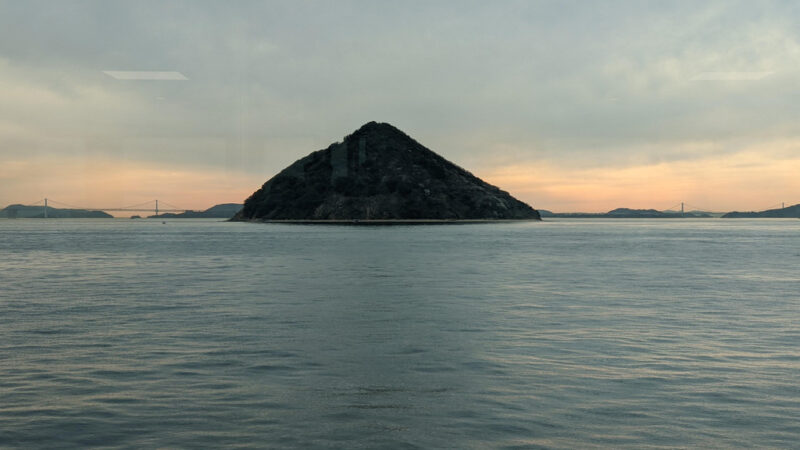 Damn, seeing the picture now, I regret not taking it from the top deck of the ferry. I would have been able to avoid the reflections from the window. Oh well, it was getting chilly.

One last thing. There has been some construction in Sunport Takamatsu too, I was wondering what it was going to be, and apparently, it’s an outdoor waiting area. Looks nice: 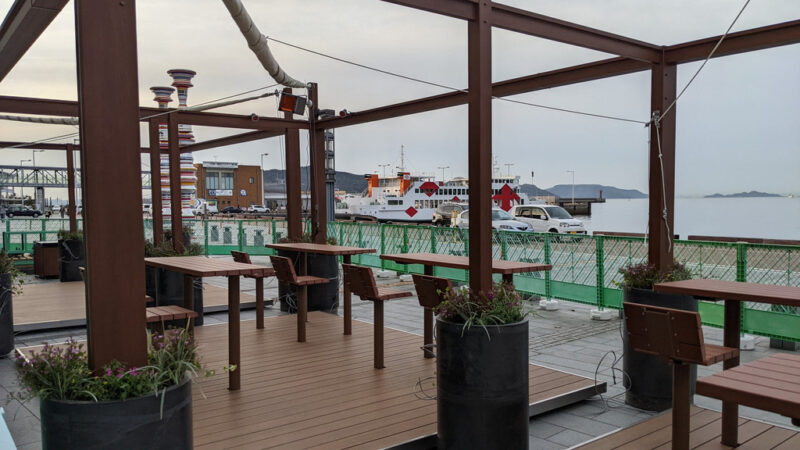 OK, that’s all for now. The rhythm of updates and new pieces of information is intensifying. I don’t know how much I’ll be able to keep up as the new semester is starting this Friday for me. We’ll see.