First of all, I want to wish everyone a very happy new year 2017.

The blog is returning to its regular “schedule” after a small break (actually I didn’t “abandon” for the past couple of weeks, I did some behind the scenes changes which, I hope, will make it faster and provide a better user experience for you, dear readers).

We’re back today with a retrospective about the Setouchi Triennale 2016 on Ibukijima.

I only spent an afternoon there. That’s the problem with the Western islands, they’re quite far from Takamatsu and not always easily accessible (fewer ferries than the eastern islands, as they don’t really get that many visitors outside of the Triennale, to which you need to add the fact that you need to reach the port from Takamatsu in the first place). Just like in 2013, those islands were part of the Triennale for one season only. While I see the rationale for doing this back in 2013 (as it was the first time they joined the Triennale, so they were kind of testing the islands), I’m not sure why they did it again this year; four new islands to visit in October was a lot, especially because they’re far and not easily accessible, and I still wanted to spend more time on the regular islands too. As a consequence, I couldn’t make it to Takamijima this year, which greatly saddens me. However, I did make it to Ibukijima, even if it took two attempts (tried to go on the opening day of the Fall session, but first we missed the ferry by a few minutes – thanks to my lovely daughter – and the end, the weather was so bad that we just called it quits). Luckily, this year, Ibukijima’s season was also Fall and not Summer like in 2013 (the heat was just too unbearable back then).

Ok, let’s start this visit, shall we?

We start with an old favorite, House of Toilet by Daigo Ishii.

Yes, it is a public toilet, but it’s awesome, although a bit too crowded that day to fully enjoy it (I mean, as a work of art). It really is an enjoyable and relaxing place when it’s quiet. Indoors and outdoors mix in a way that Japan loves, and every “cut” in the walls points in the direction of a famous place. I’ll show you more about it one of these days.

Our next stop is in the building right next door, where another artwork from 2013 is waiting for us. It’s Unsinkable Ship by Ryo Toyofuku and the Chiba Art School. I wrote about it back then, and I invite you to read the post if you want to know more.

I really like this work, although, like many other things in Japan, it was not designed for someone my height. 🙂

In the same building, there was a very peculiar work, as it was both an art installation and a video game! It was some sort of motor scooter simulator, where you had to try navigating through the streets of Ibukicho. Scooters are indeed the main mean of transportation for the island’s locals, and driving those through the narrow streets of the village, requires some skills indeed.

It’s called Legend of Ibuki Island Drift by Contact Gonzo. I didn’t get to try it, my daughter didn’t really allow me to at that moment, but it is my understanding that it will be a permanent work on the island. 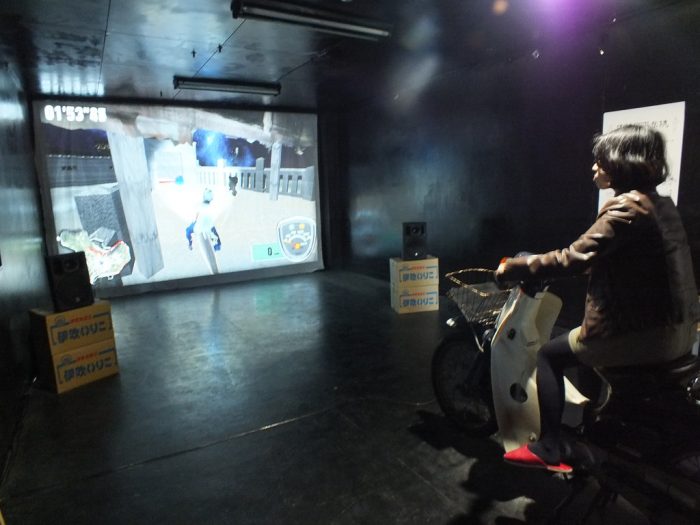 Next, we also walked around the village. A village that I find fascinating, maybe because it’s so big compared to the size of the island. To give you an idea, Ibukijima is roughly the size of Ogijima, but with a population of about 700 people (that’s roughly the population of Teshima – and Ogijima has about 200 residents). The main reason for such a large population is that Ibukijima has a thriving fishing industry, it’s the largest producer of sardines and anchovies in Japan. Also, I wonder whether the fact that the island is so isolated compared to the other Setouchi islands played a part in retaining its population more? Now, don’t get me wrong, Ibukijima greatly suffers from depopulation too, and abandoned houses are everywhere. I wonder how many people lived on the islands at its apex, but definitely more than a thousand. 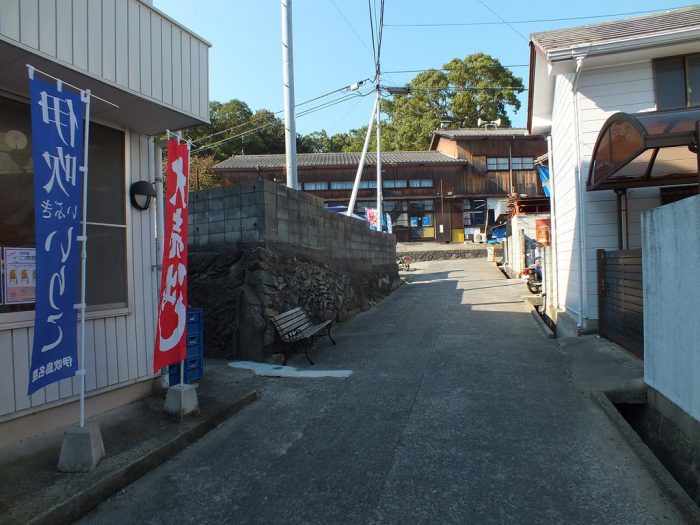 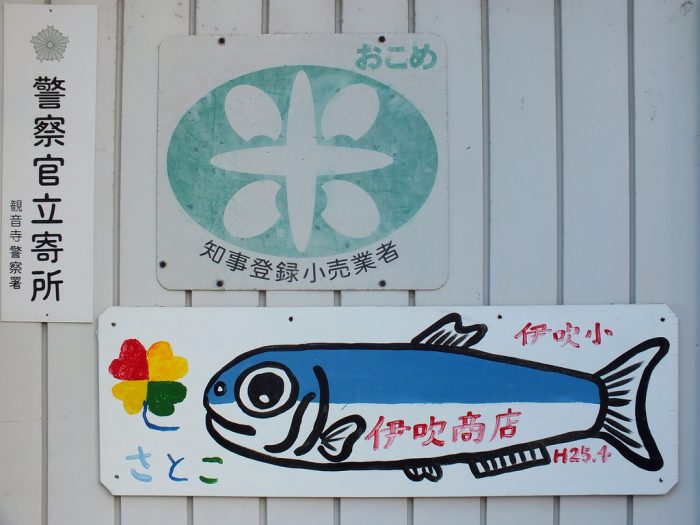 Many businesses, especially those related to the fishing industry have those signs at their entrance. 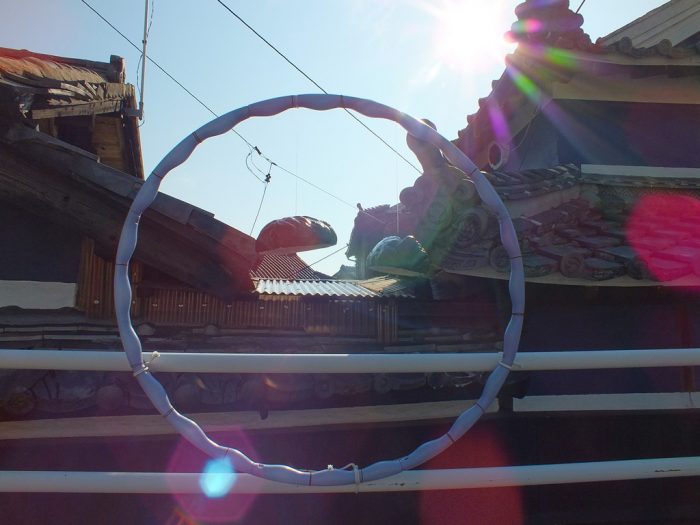 So, this was an artwork, small structures and tiny installations were spread all over the island like this. It was T-R-A-N-S-F-O-R-M-E-R by Kohei Kobayashi, but unfortunately, the work didn’t really resonate with me. 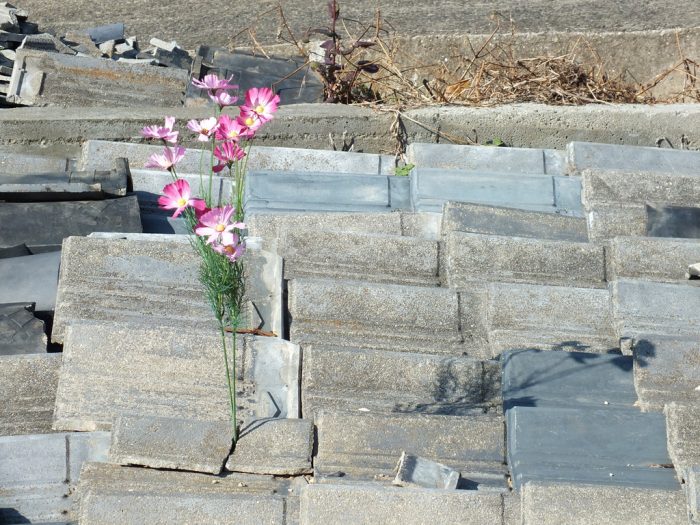 This too, was part of an artwork. Limit / In the silence of Ibuki, some drops of water stroke me the hour by Wilfredo Prieto. Basically, it consisted in flowers and tiles, and like the previous artwork, it could be found in many parts of the village. While I liked it, I kinda admit it was also easy to miss, because… well… the village is full of flowers and tiles…

Ibuki also has a small history museum full of old artifacts and also a few texts and videos about the rich history of the island. It also housed a video projection that was part of Kohei Kobayashi’s work.

Back in the streets of Ibukijima, which really are the most interesting thing on the island, I must admit that I wasn’t that impressed with the new artworks this year. 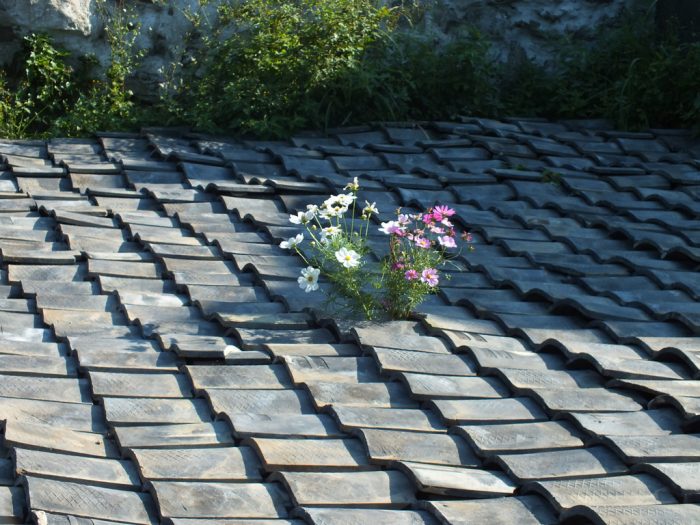 And back to the streets: 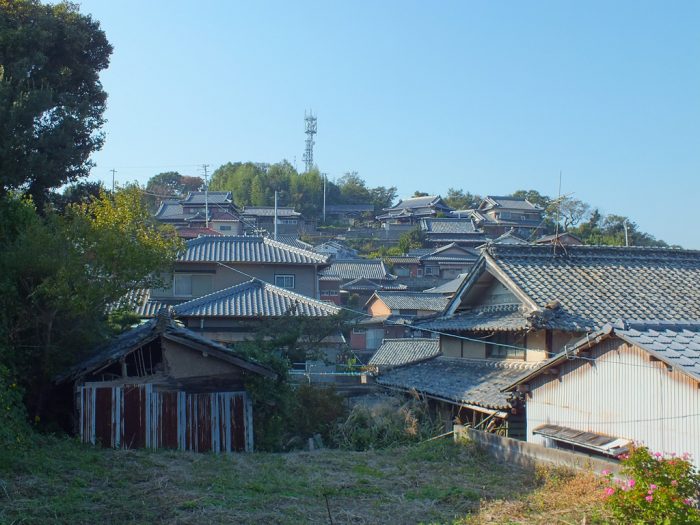 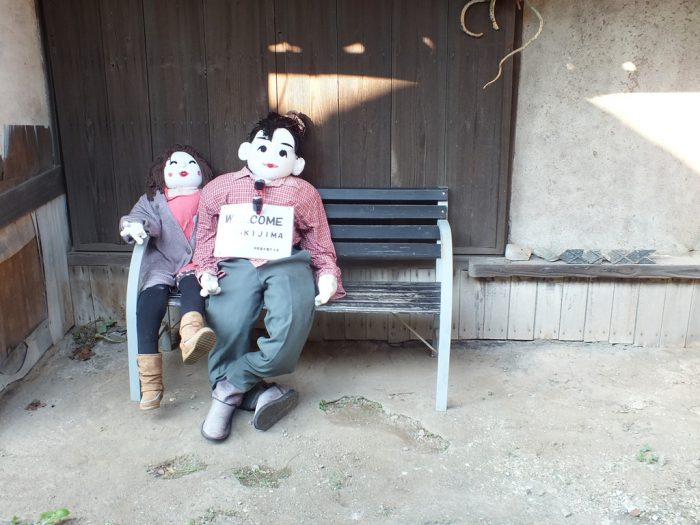 You may have heard of Nagoro, the small village in Tokushima Prefecture, that has gathered international media attention in recent years because of its life-size dolls, an art project by Tsukimi Ayano to make depopulation visible. Well, those dolls are really gaining in popularity as a couple can be found on Ibukijima too (as well as in front of a café in Takamatsu located on my way to work, probably other places too).

The next artwork was a bit odd, but also kinda fun. It was called Here, There, Everywhere: Project Another Country -Dap-Pay- by Alfredo and Isabel Aquilizan.

The main part was a big “satellite dish” made of bamboo, window frames and window screens. It looked pretty cool I must admit, like some sort of pre-industrial advanced technology. Another part of the installation were some “wooden flags/tags” with names of the island’s businesses and/or fishing boats on them. I assume that the direction they were pointing at was the location of the places and the boats. 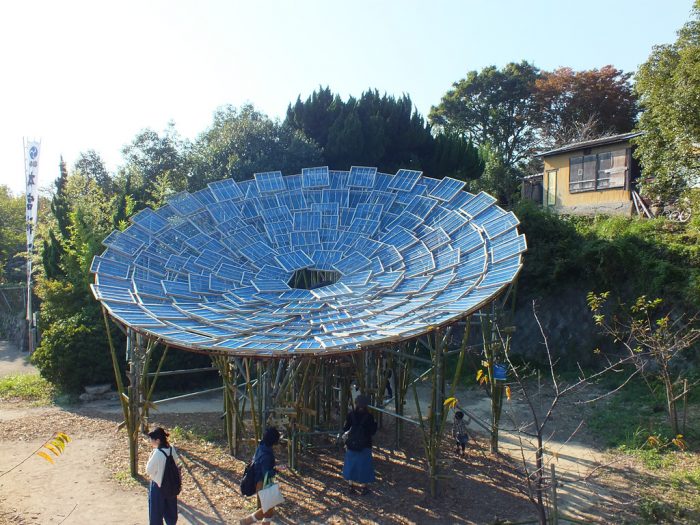 The view from the spot was pretty nice too : 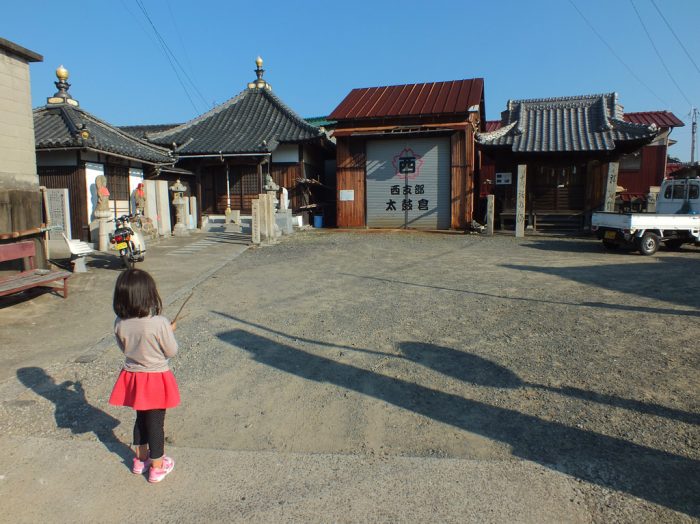 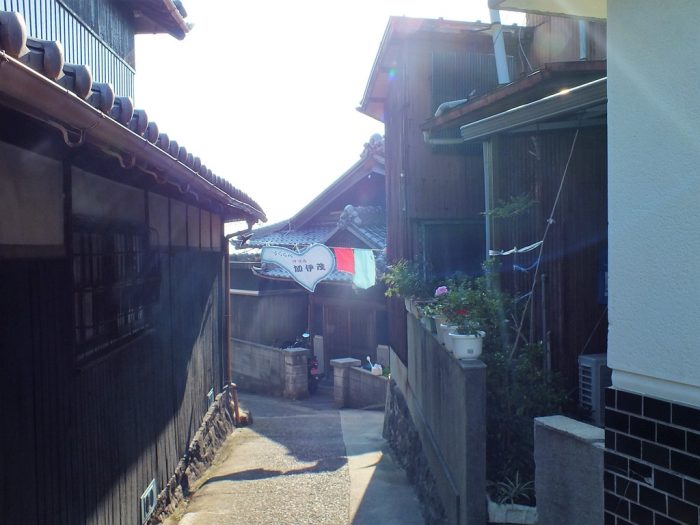 Our last stop on the island that day was a new rest area made for the Setouchi Triennale, but that is now a permanent feature of the island. It’s called Iriko Retreat (iriko meaning dried sardine, Ibukijima’s specialty) and was designed by Mikan in association with some students from Meiji University. It was a pretty nice and relaxing place, but it will need some regular maintenance to stay nice on the long run. Let’s hope the island residents embrace it like many other places were on other islands (I’m thinking of Umaki Camp on Shodoshima for example). 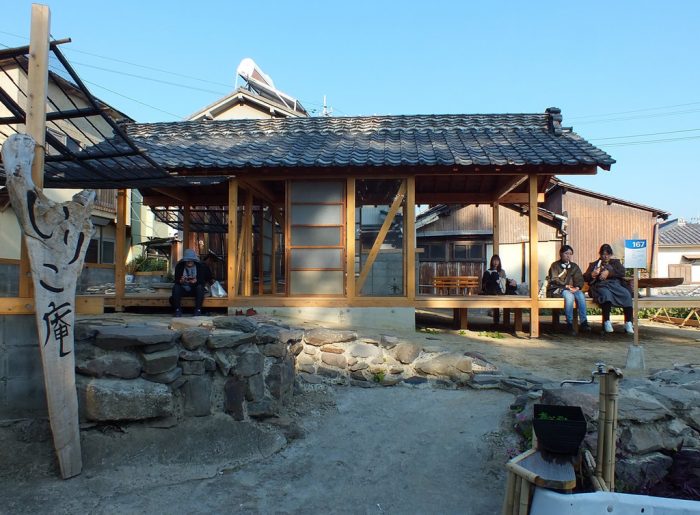 And that was our last stop of the day…

OK, I’m lying. There was one more thing to attend to before leaving the island, as the Seppuku Pistols were arriving at the port for a few performances on the island, and we couldn’t miss them before leaving. However, they deserve an entire post, don’t they? So, you’ll have to wait a little longer for them.

After seeing their first performance in the port (after that, they walked to the village, but unfortunately, if we had followed them, that would have meant having to take the last ferry – that was too late for the kids, especially my one year old – yes, traveling with kids always demand an extra layer of planning).

As we were leaving the island, the Koebi-tai volunteers and/or island residents waved goodbye in the most wonderful way:

Yes, it was a good day on Ibukijima. I want to be able to spend more time on this island, let’s hope my next trip there will be before 2019. 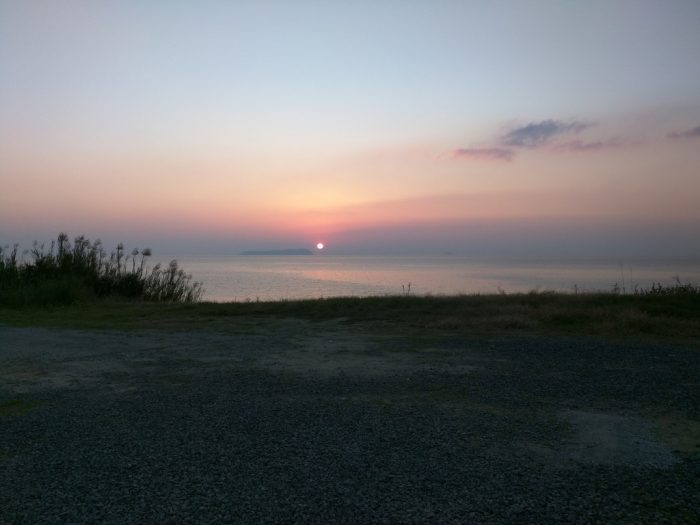