One thing that perplexed me the first time I went to Ogijima was the fact that the main if not only thing that was promoted in the area as an incentive to visit the island was its daffodil fields that bloom around this time of the year (that was before the Setouchi International Art Festival, though).

It is clear for me that for any Westerner (and possibly any non-Japanese person) this is not exactly an efficient way to attract people on an unknown and somewhat isolated island. But that’s the thing, this promotion was not addressed to foreigners. And do you know what foreigners all have in common in Japan? They’re not Japanese!

So the question I often asked myself; “who would want to go to an island just to go see daffodils?” has a very simple answer: Japanese people!

And because we’re dealing with Japanese people here, don’t go imagine that families or couples or friends go to Ogijima to go see daffodils as a week-end outing during the end of Winter… Well, some do… But the main way people from Takamatsu and around go to Ogijima to see those daffodils are as a group tour!

Yes, you read me right, a group tour to go see flowers on an island that’s a simple ferry ride away from home…

And this is what happened last week-end (and possibly other week-ends these days? not sure), group tours to go see Ogijima’s daffodils were organized. They all gathered early in the morning at the Sunport, all boarded Meon 1 and 2 (yes, both ferries were used for the occasion) all visited the daffodil fields and Ogichō together and then all had lunch at Ogichō’s port together before all leaving the island together in the early afternoon.

How many people I’m talking about here? Oh, about 300-400 people (as a reminder Ogijima’s population is about 200 people).

This is what we did too!

Er… Before I go any further I want to clear up any possible misunderstanding here. We didn’t go on the group tour. First, I’d rather be caught dead than going anywhere on a group tour. Second, I think this is possibly the best way to make Ogijima unpleasant.

No, we just decided to go that day, just by curiosity, to see how Ogijima is like with a few more people than usual. We actually took the 1PM ferry to the island, and just before arriving there, we saw most of the 300-400 people leaving the island on the other boat. So, while the island had more people than usual, we didn’t have to suffer that huge group at any time.

And when I tell you that this daffodil thing is serious business, here is the proof; they even have special flags over the island for it:

On the way to the lighthouse, we encountered a bad surprise that was not exactly one as I knew that had happened. Last summer, one of the typhoons that have struck Japan created a small landslide on Ogijima and the road to the lighthouse was badly damaged. The surprise was that it hasn’t been repaired yet: 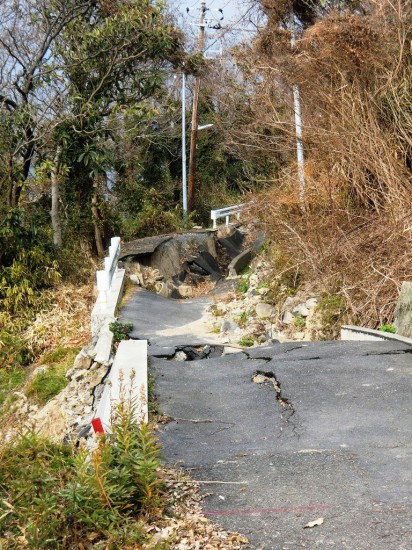 Actually I wonder how they’re going to be able to fix it, there’s only one road (this one) and it’s so narrow that no truck or construction engine can go on it. I even wonder how they were able to built it in the first place. Although Japan being Japan, I’m sure there are existing small trucks and small construction engines especially designed for this type of situation.

If you wonder how one can access the lighthouse now, the answer is actually simple, a path was made for about 100 meters in the abandoned field alongside the road.

When we arrived at the lighthouse we had another surprise. A good one this time: 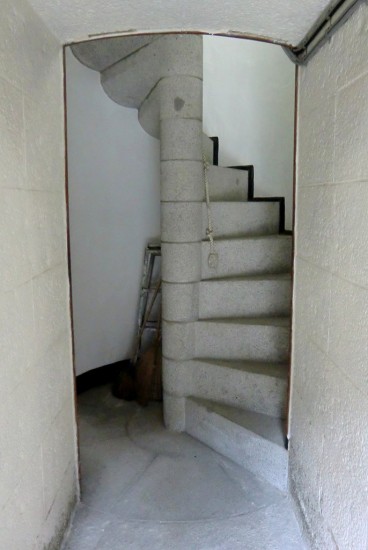 The lighthouse was open to the public. A thing that happens only about every six years, I’ve heard. 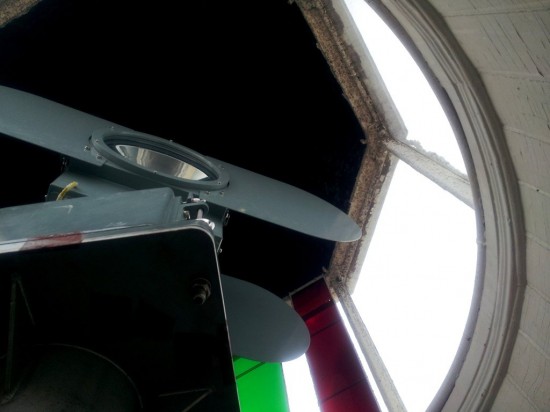 And as it’s a small lighthouse, going to the top is a one man at a time affair and even this way, not an easy task. Above is the only way I could take a picture of the lamp (through the access hatch). The top is so small that if I had been a few centimeters higher or a few pounds heavier, I don’t think I could have entered it. 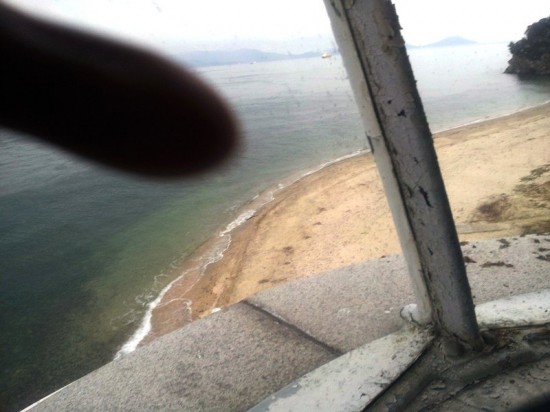 And as you can see my attempt to take a picture of the Seto Inland Sea seen from Ogijima’s Lighthouse is not exactly a success. The dark thing on the left is most likely my finger that ended up in the frame as I took the picture while trying not to bang my head anywhere nor lose my balance and fall through the hatch or at least drop my camera. Yes, it was a much harder thing to do than this poor result implies.

Right after exiting the lighthouse, we ran into Mr. Tanigawa at the exact same spot where I had filmed him more than a year ago. He remembered us, and with whom we had a little chat (and he was once again full of good advice about the daffodils for us and the many other visitors). 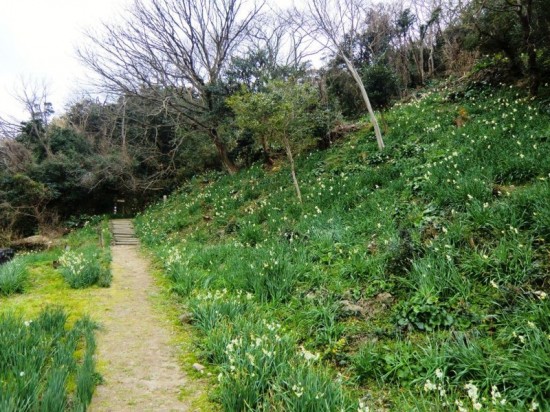 The beginning of the path that leads to the heart of the island. The main daffodils fields are about one kilometer away, but it is one kilometer of real hiking, not just strolling. Not really exactly advised for pregnant women. So we didn’t see that many daffodils, but those were more an excuse for a small trip to Ogijima than anything else. 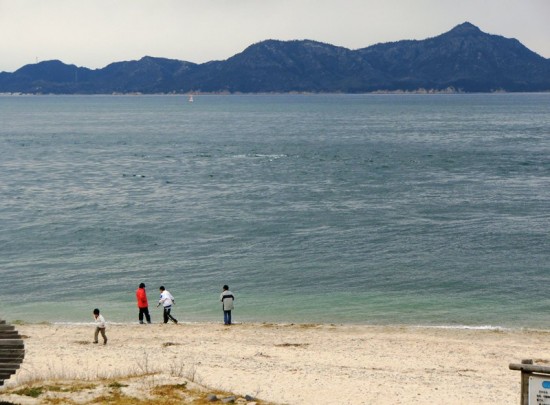 What’s so special about kids playing on the beach? Well, on Ogijima, it is very special when you know that the population must be above 60 years old average, and that there are just a handful of kids remaining. Remember that the school had to close last year, but the last three kids who were students there went to Junior High in Takamatsu (and if I’m not wrong, the kid with the red coat is one of them). 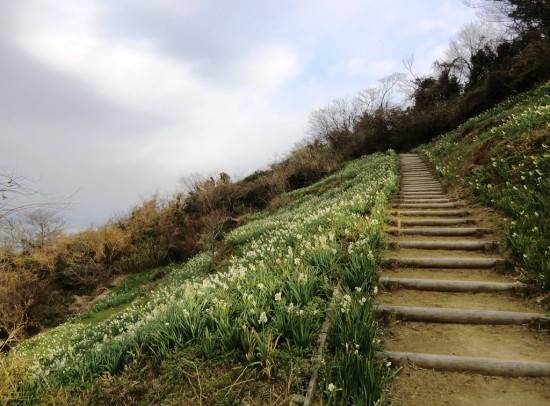 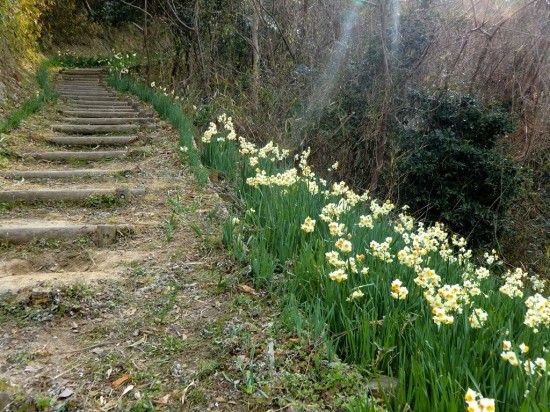 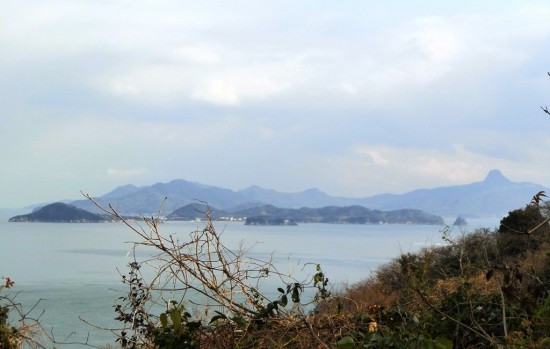 An unusual view of Ōshima from Ogijima’s “east coast path” that leads to Toyotama-hime shrine from the lighthouse and that can be a real jungle at times. It had been cleared up as many visitors were expected, so I walked a (very small) part of it, not much as I didn’t want to leave 康代 alone. 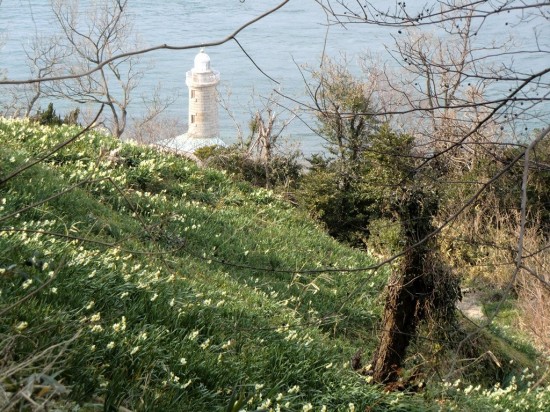 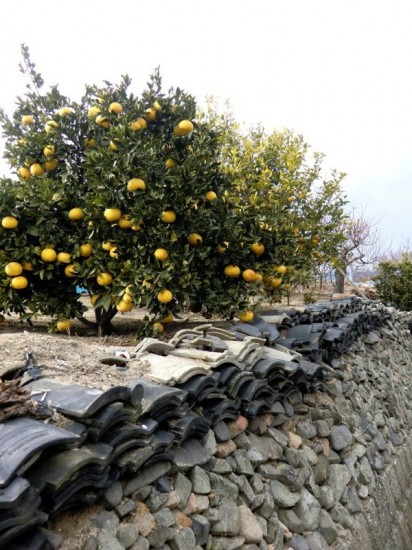 I’m not exactly sure what tree we have here. Its fruits vaguely looked like grapefruit, so I guess they’re a Japanese kind of citrus I’m not too familiar with. 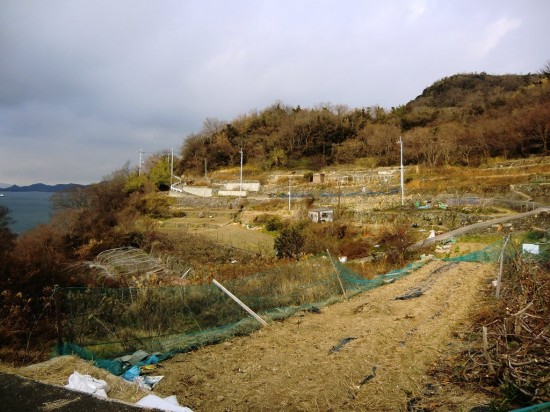 On my very first visit to the island, I had taken a picture from the same spot, and I have taken a few more since (you may find them on this blog). I find it interesting to see how it changes with seasons. Which leads me to another reflection. I have already told you how when Ogijima was more populated, it also had many more fields than it has now (for obvious reasons). Nowadays these fields have been invaded by nature and you can’t really tell those shrubs and bushes were once fields. Except in Winter, with most of the leaves gone from most of the plants, walking to the lighthouse, you could guess the former fields everywhere, some abandoned paths and terraces suddenly appearing where they’re invisible the rest of the year. 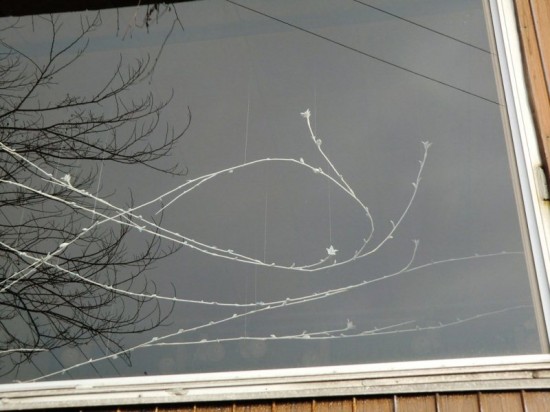 Sea Vine is closed for another month or so, but I’m still offering a glimpse (actually it is the first time I notice that one can see a bit of it from the outside). 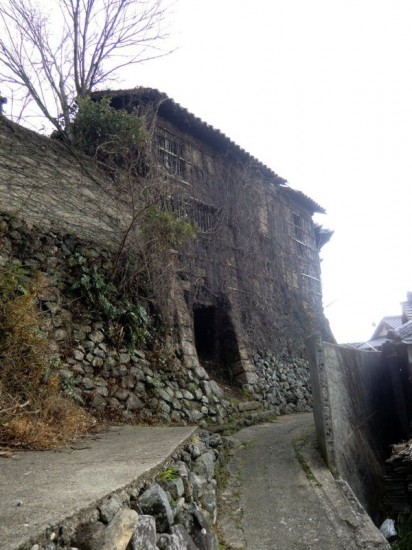 This one has become one of my favorite abandoned house on Ogijima. However, it is in a such bad shape that if I were to buy it, I’ll have to raze it and rebuild it from scratch I’m afraid. (yes, now I “shop” for abandoned house when I go to Ogijima, although I won’t be able to afford one – or rather rebuilding it – before a long time, and they’re not all for sale anyway). 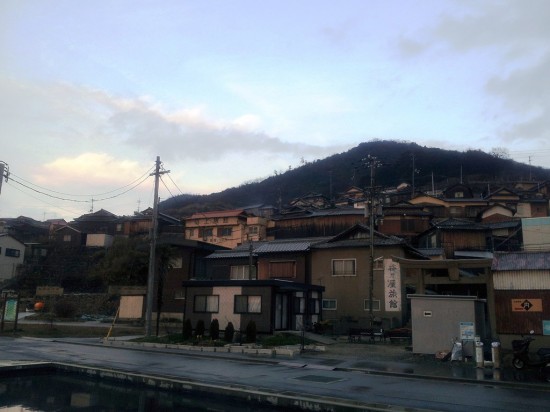 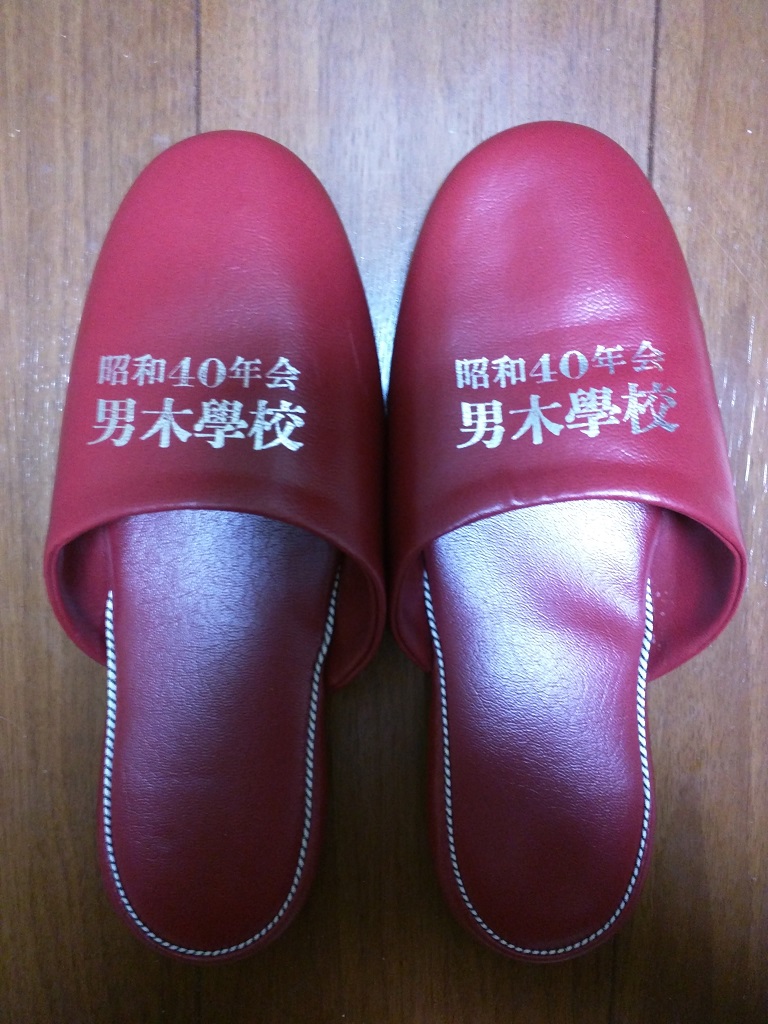 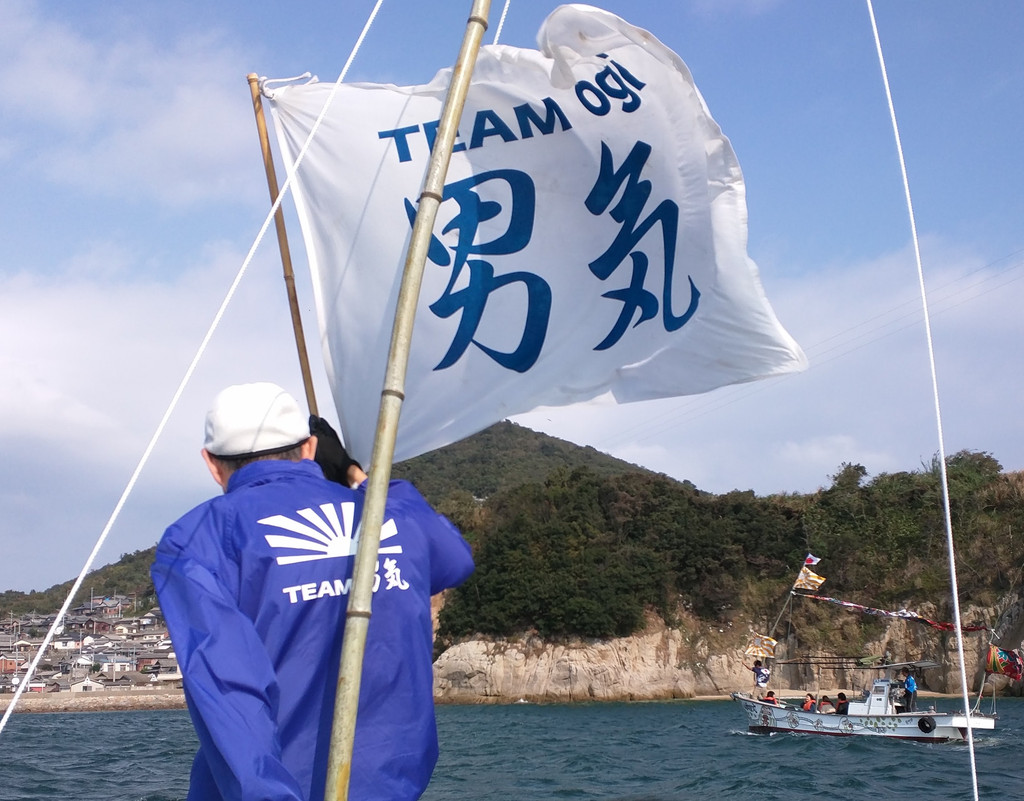 Sunday was the last day of the Setouchi Triennale 2016, and of course, like a lot of days this year, it started […] 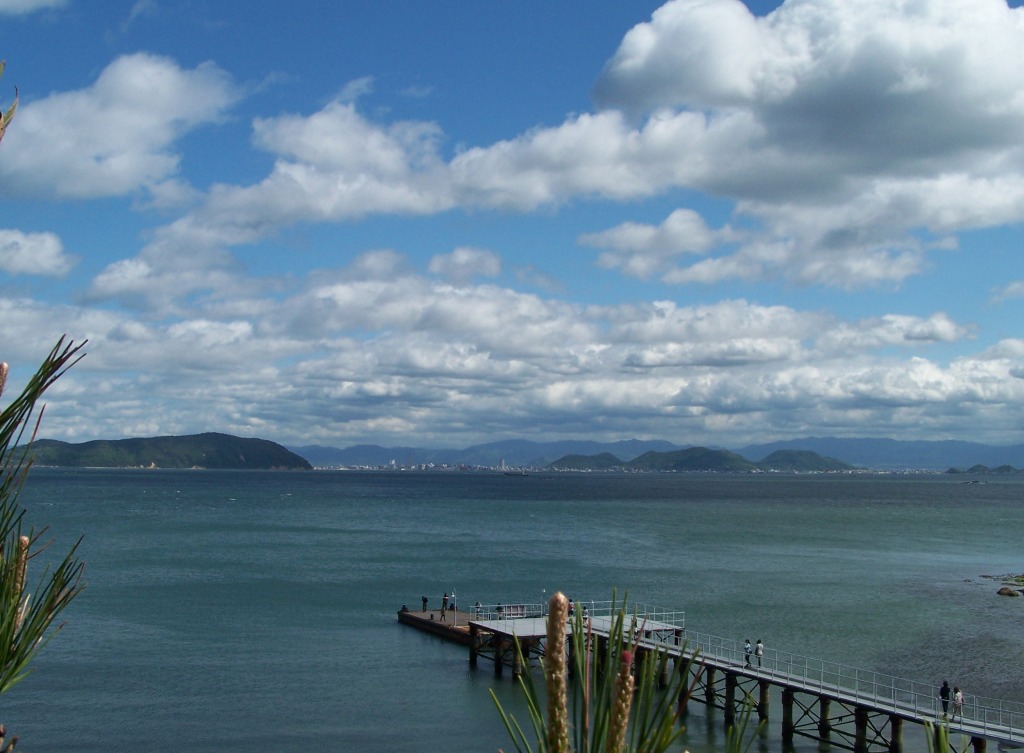 Nowadays, Naoshima is more and more famous, with reason, for its great museums and art. However, when you visit the island, […] 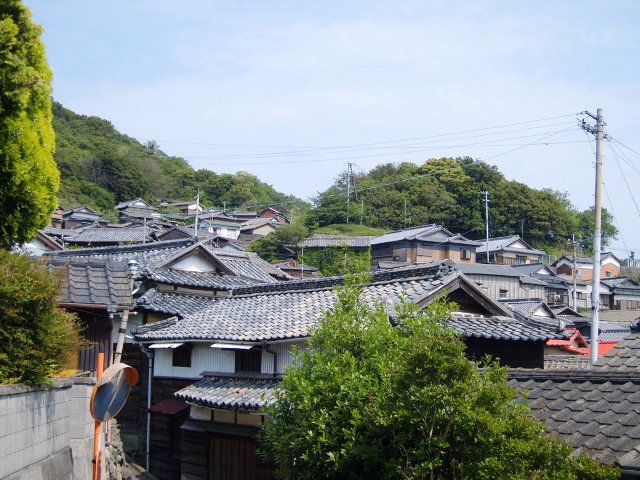 Just some roofs in Ogichō.