Not a lot a to say about Haruki Takahashi‘s Sea Vine except that it is the first “artwork in a house and on an island” that I saw on Ogijima. I know, it may sound weird to see that as a detail worth mentioning, but the Setouchi International Art Festival‘s staple was really “artworks in abandoned houses on islands” even though not all pieces of art were like that. 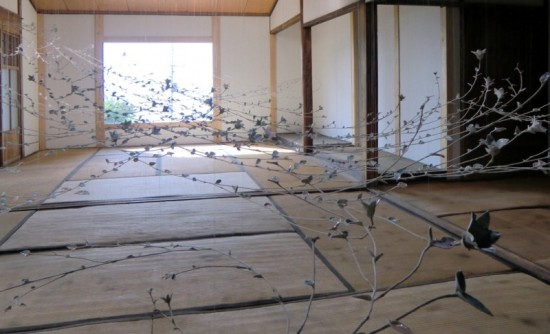 Before starting to visit the Festival, while reading that a lot of the art was going to be into abandoned houses, I wondered what the result would be like. I recognize that – most of the times – it was a very interesting and pleasing idea and Sea Vine is a good example of that. From the streets, nothing transpired that there was art in that building (if you don’t count the blue and white Art Setouchi sign in front of the door of course) and the line to enter. As the house was rather small, only 6-7 people could enter at a time, but when we finally did it, it was as if an entire new world opened in front of us. 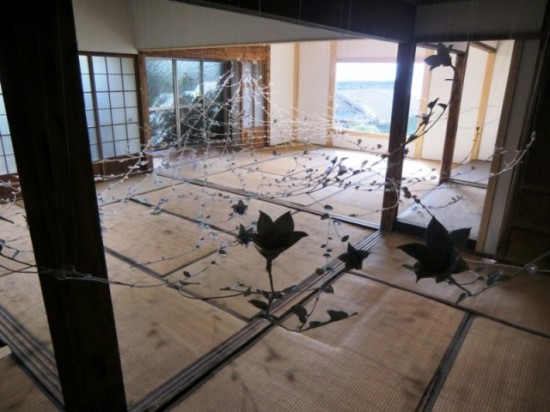 A small anecdote: it was also the first time in my life I had to take my shoes off to view a piece of art. A bit strange at the beginning, but I think this is really during that week that I fully got used to repeatedly taking my shoes off and on as it’s common practice in Japan. We had to constantly do it in order to be able to view many of the artworks. Yet, it stayed a bit odd. When one takes their shoes off at somebody’s house it makes total sense to me (after all, I do it at my house too), in a restaurant it’s a little bit more strange, but in such public buildings, it took me off-guard several times. However, I think that that contributed to giving a particular atmosphere to these places, and it reminded us that they used to be homes where people lived before.

Back to the artwork itself. The guide mentioned that the vines were like a wave coming from the sea through the window and uniting the viewer to the sea. Well, I’m not sure if the desired effect really worked, but in any case I really like this piece, just because it’s simply beautiful (sadly the pictures don’t show well enough the details of the ceramic flowers, all painted with sea motifs).

Note that Sea Vine still exists and you can visit it every day this week (because it’s Golden Week) and every week-end the rest of the time.

For more details about the artworks that are still around, you can check the list and schedules of Art Setouchi here.

Ok, people, now I’d like your opinion about something. While I really enjoy telling you about all of this art on the Setouchi islands, I understand that not everybody really cares about them, especially the art that is not around anymore. I will still keep on talking about it, for several reasons:

My original plan was as follows: to cover the Festival in its almost entirety and then to shift the focus of this blog to my first two trips to Japan that I have yet to tell you. By the time I’m finished telling you all of that, I will have returned to Japan or (let’s be incredibly optimistic) may even moved there, which will bring new material for sure.

Now, I’m thinking about not waiting to be finished with the Festival to start telling you about my previous trips. First I was reluctant to do so because it would be “messy”, but actually “who cares?” Well, you people care, so what do you think?

Should I finish this Art Setouchi coverage, and then shift to the old trips? Or should I mix both, you won’t mind?

Tell me what you think.