So here we are. My very first New Year in Japan is just around the corner.

I’m going to tell you a little bit about it, as you’ll see it’s pretty different from what’s happening in the Western World.

I don’t know about you but for me, New Year’s Eve, both in France and in the US, always was synonym with a big party, possibly the biggest party of the year. And as a consequence, New Year’s Day was often spent at home, or even in bed, most of the time with a big hangover. Ok, to be totally honest, I have had such a big party in a few years, the last four or five New Year’s Eve were spent with the family. I guess age plays a part here, being married to a Japanese woman too.

In Japan, while New Year’s Day is as important as in the West, possibly even more important (we get not one, but three non-working holidays here and most people even get a few extra vacation days), New Year’s Eve is actually quite low key. It’s almost a normal day actually.

If I understand correctly, tonight, after a dinner composed of noodles (mostly Soba and Udon) the Japanese population will be divided in two parts:

What about us?
We’re not sure yet. We will most likely go check the local shrine to see if there is something going on (it’s a small one, so there may not be anything). Else, it will be a normal evening for us, I may even blog a little, who knows?
On the other hand, lots of things are planned for the next two or three days. More about that soon. 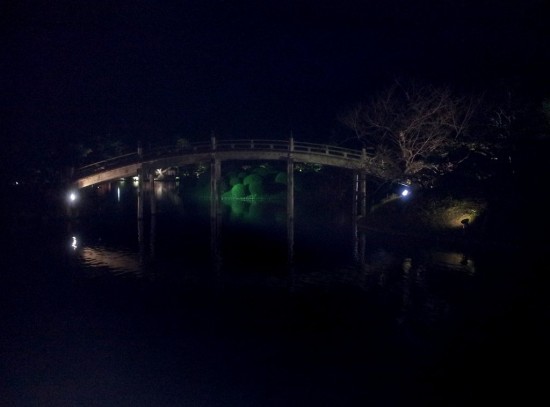 This picture is a teaser for a future post. Yes this is the Ritsurin Garden at night.