But just a few lines, as you will see, my visit turned out a little differently than expected.

Motoyama-ji is located in Mitoyo, right next to Kan’onji (both cities border each other) and I had meant to visit this temple for quite a long time, basically every time I went to Kan’onji and saw it’s pagoda not too far from the road. For some reason, it never happened before last month and ironically, I barely “visited” it.

First, there was some construction work, which made the place a little unsightly, but also the temple doesn’t have much to offer except for the pagoda. Whoops… I’m being informed than the Kondo (the main hall) dates from the year 1300 and is considered a National Treasure. Shame on me for not paying attention to it more. I guess that’s a good reason to return.

So, here is the only picture I took of the temple (with a few more borrowed from my mother – my parents were visiting from France): 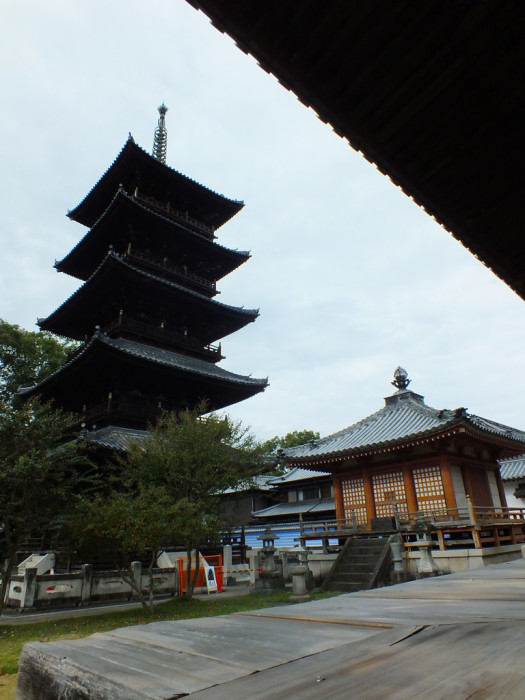 So, at this point, you must be wondering why this unusual lack of focus from my part. It’s simple, as my parents were visiting and my daughter was playing, I spent most of my time in Motoyama-ji talking with Markus.

Markus is a very friendly guy from Germany. I first ran into at Kan’on-ji / Jinne-in (temples 68 and 69, they happen to share the same ground), but we didn’t speak then, just said hello. I met him again in Motoyama-ji an hour or so later. In the meantime, we went for lunch, he walked from one temple to the other.

Oh yeah, should I mention that he was walking the Henro Pilgrimage, the traditional way? Entirely on foot (only taking the train to do some tourism escapades, always returning to where he took the train to resume his walk), starting at the first temple, finishing there too after completing his visit of the 87 other ones. And after that, heading to Koya-san to complete the whole thing.

And so, we just talked for quite a while about a bunch of things: the Shikoku Pilgrimage itself, the things to do and see on Shikoku, my life, his life, and more…

The kind of wonderful encounters you make from time to time and that reminds you that human interactions matter more than most things, even 700 years old buildings.

You may think that the background of this picture doesn’t look like a temple much, and you’re perfectly right. The thing is that I ran into Markus again, a few days later, in the Ritsurin Garden, that he was quickly visiting before a long day including at least Yashima-ji and Yakuri-ji (that’s two very steep climbs, even though he saw much worse).

I didn’t see him again and as I type these lines, I must have returned to Germany by now. I don’t think I’ll run into him again (although, who knows, crazier things have happened), but I’m sure his month and a half spent on the roads and paths of Shikoku will stay with him forever.

And Motoyama-ji? Oh, I’ll have plenty of occasions to go back…