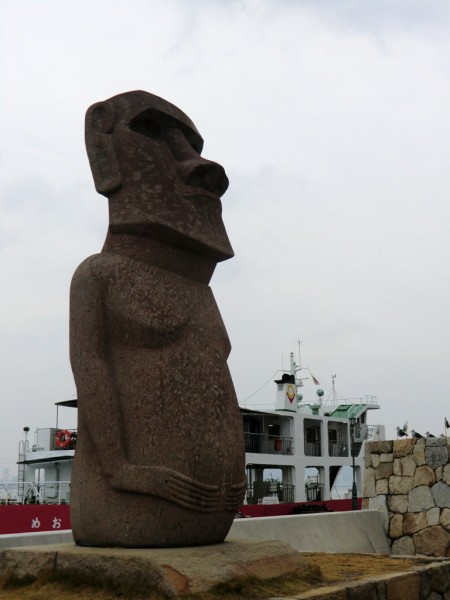 You may be surprised to learn that there is a Moai (that’s an Easter Island Statue) on Megijima. I know I was the first time I saw it.

I guess it requires a small explanation, doesn’t it?

Unfortunately, it is not a real one. I don’t think any Moai has ever left Easter Island, although I could be wrong.

It was built by artist Kazuhiro Yamada to resemble areal one as closely as possible (in size, weight, materials used, etc), because it was built for a specific purpose. It was a command by Tadano, a crane company based in Kagawa, that undertook a Moai restoration project on Easter Island. This statue was used to test the crane that was going to be sent to Easter Island along with some tools especially designed for the endeavor  So it basically was a guinea pig statue. After all the testing was done, the crane was sent to Easter Island where it took part in the restoration project. The statue was donated to the city of Takamatsu that decided to install it in the port of Megichō. I’m not sure why there, but it’s been standing there ever since (that was in 1996) and you too can see it if you go to Megijima.