Last week-end I moved, and left Matsunawa, the neighborhood that I called home for the past five and a half years. Worry not, I didn’t leave Takamatsu and I don’t see that happening in the foreseeable future. I just changed neighborhoods and left my apartment that had become way too small recently (since Kaito had started walking basically) to a much larger house.

This move has been full of mixed feelings. I’m not sad to live the place, it really had become too small. However, at the same time, this apartment was my very first home in Japan, the place where my kids walked their first steps and all those sorts of things. I also realized that this is the place where I lived the longest after leaving the parental house a few decades ago.

And there’s also the neighborhood (called Matsunawa in case you didn’t read neither the title of the post nor its first line). I have grown fond of this neighborhood. At first sight it lacks some sort of soul, most houses in the area are less than 20 years old, but while they’re slowly disappearing, the neighborhood is still full of rice fields. Yes, it’s the city, but it’s still the countryside a little bit. And I always loved that about it. I’m already missing not hearing the frogs at night. While residential, my new neighborhood is quite urban and there is no rice field in sight.

Will there be crickets in September? No idea. I’m not sure I’ve ever told you about Japanese crickets, but they really are one of my favorite things about living in Japan. In September, when nights aren’t so hot anymore that air conditioning is not needed and one can open the windows at night, crickets singing is one of the sweetest and most soothing sounds I know (even more than their European counterparts.

Kumano-jinja, the small local shrine will also be missed. I didn’t used to go that often, but I really liked it and I really liked the thought of it being just a couple of streets away. For some reason, no real shrine in my new neighborhood (I spotted a torii, but without a shrine, or maybe there’s a very tiny one hidden behind. 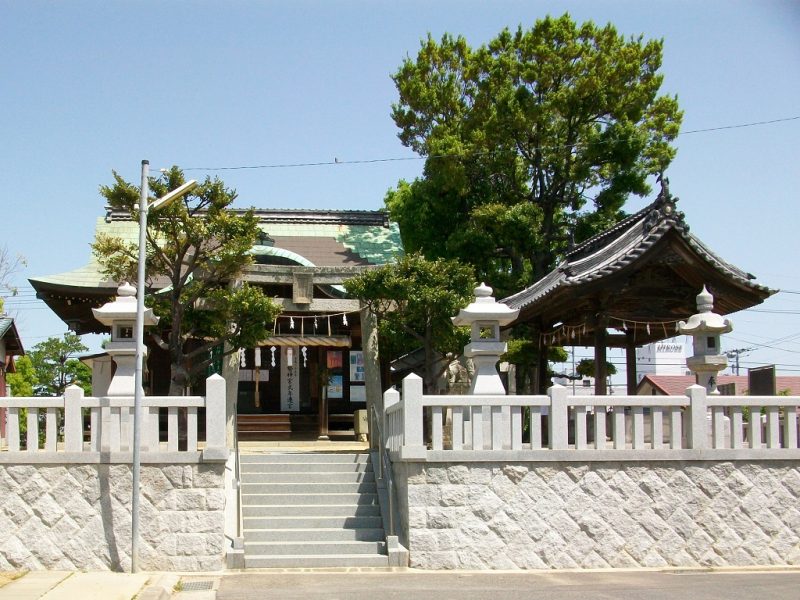 I will not pass in front of Ritsurin Garden every day on my way to work anymore. I always enjoyed seeing it (or at least its entrance) every morning.

Now, don’t get me wrong, my new neighborhood has many things to be excited about. Instead of the Ritsurin Garden, I now see the Seto Inland Sea and my beloved islands every day to and back from work. I just need to walk a hundred meters or so to see killer sunsets (expect pictures). I’m also much closer to both downtown and work. I can ride my bike for a few minutes or even walk there (well, maybe when it’s not as hot). I never enjoyed driving in the city and I will do much less of it now, which is a good thing in so many ways: I’ll be polluting less, saving money on gas and exercise more.

So, that’s pretty much it. This post was to bid farewell to Matsunawa and keep you updated with the latest developments in my life. I may not be as present around here as usual. Even if the move is complete, I’ll be quite busy for the coming week and right after, I’m heading to France for almost a month! I haven’t been in my home country for three and a half years, so you can imagine the mix of excitement and apprehension. Still, I don’t imagine myself not posting at all while I’ll be in France. I’ll have to occupy myself at night when everyone is asleep and I’ve grown tired of watching French TV again (that should be roughly 72 hours after getting off the plane).

2 thoughts on “Farewell to Matsunawa”