Ok, let’s jump with both feet into the topic of the day: 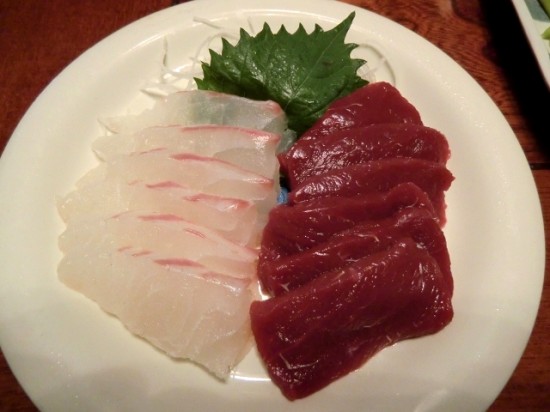 On the left hand side, sea bream. Delicious.

On the right hand side… Whale…

That’s it, I said it… I ate whale meat last October in Japan.

For the more open-minded among you who are currently asking “So? How is it like?” My answer is that I really enjoyed it. It’s a fat meat (as it was expected) and as such, it somewhat melts in your mouth, and all in all it is quite delicious, despite the fact that it’s raw.

For the other ones among you, the ones that are ready to burn me at the stake, I’ll answer you that I don’t approve of whale hunting and whale eating either and I wish Japan stopped doing so.

However, I don’t think that refusing to eat what was being offered to me would have furthered the cause one bit, and I don’t think it would have had any effect other than offending my host. Especially because she bought this for me as she knows I love trying new foods (and no it’s not a habit of hers to eat whale meat, she may have not done it in about 10 years or even more).

I also could underline the hypocrisy of being shocked by the fact that some people eat whales and not caring at all for other animals that are as threatened, much more than whales, but that are not as “cute.” I’m especially thinking bout sharks, who are simply dying these days although they’ve existed since before the dinosaurs and thus survived at least two mass extinctions, or about tuna who will also be wiped out of the face of the planet soon, but nobody seem to care because they’re so good and nobody in the Western world will face the fact that the current sushi craze is in large part responsible for that situation (if at least they were real sushi and not that Chinese crap that pretends to be Japanese because Westerners won’t know the difference, nor care).

So yeah, I ate whale meat, I’m not proud of it, but I’m not ashamed either and if I have to do it again, I will without thinking twice about it.

(don’t worry, the next post will be more consensual)