Last weekend was Bengal Island‘s next to last weekend. Now, I’m really a “regular” of the place, I know pretty much everyone there, if only by sight, and I don’t go there with the purpose of finding new things anymore, but rather to just have a good time in this quite special place (that and see how various projects are evolving). However, if the atmosphere is now very familiar and even friendlier than during the first days, there is something in the air. We can sense that the end is coming. A few booths are already empty, the people who occupied them having left for one reason or the other (some artists and craftspeople could only stay a month and not the 41 days that the summer session of the Setouchi Triennale lasts). The atmosphere is a bit quieter, less effervescent than it was a few weeks ago, even though the fact that it had rained a lot played a part – not too many visitors during those two days, especially compared to some other Sundays). As a consequence, the atmosphere was much more intimate. Yet, one can feel that the end is coming, even if nobody talks about it, even if nobody wants to think about it, it’s in everyone’s mind right now. 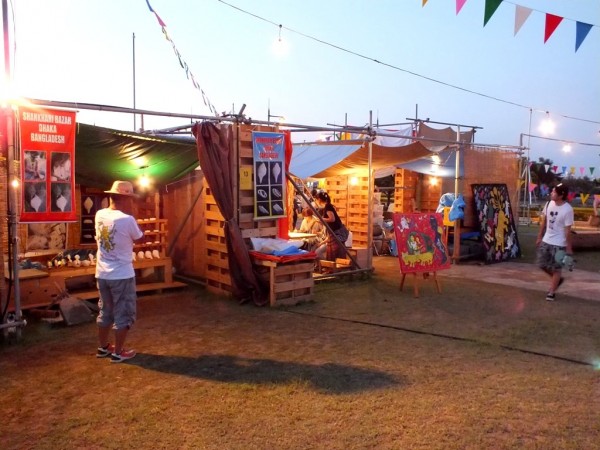 The booth where the jute work used to be. It is now used to exhibit some of the various Bangladeshi craftsmen and craftswomen : 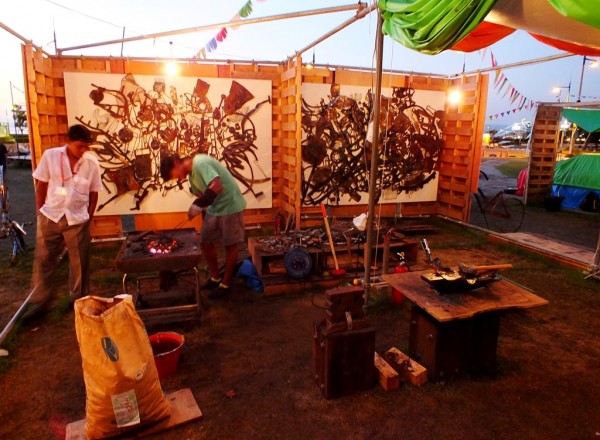 Atsushi Ozawa, always hard at work in his Oza Metal Studio. Honestly, I don’t know how he survived the month spending it in that heat, in the sun and working in a forge… 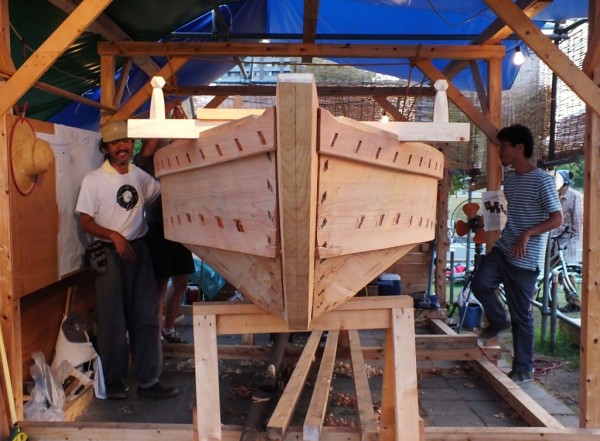 The boat built by Douglas Brooks, Koji Matano and Takumi Suzuki will be finished soon!

As I type these lines, the boat was actually launched this morning, I couldn’t attend because of this thing called work, I didn’t get any feedback yet, but I should soon, stayed tuned, especially on my various social media accounts (links to them are in the upper right corner of the sidebar or right at the end of the post, follow me, if you don’t already do so). 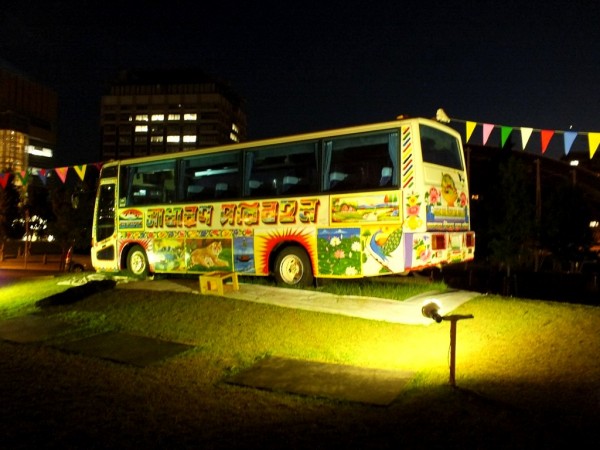 I recently realized that I always show you the same side of the bus, so here is the other one: 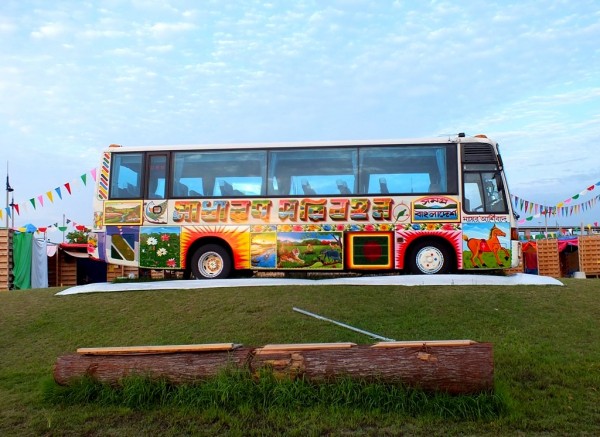 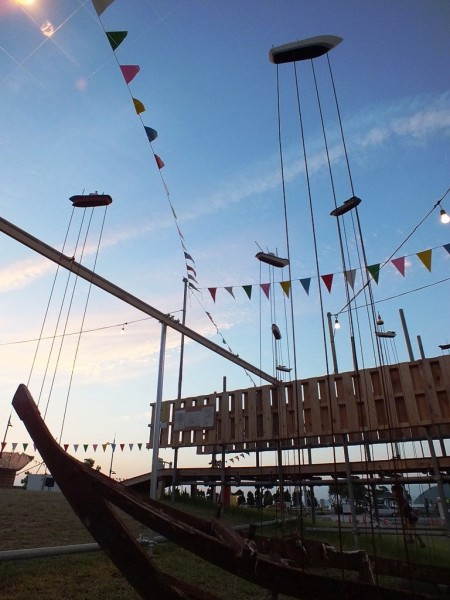 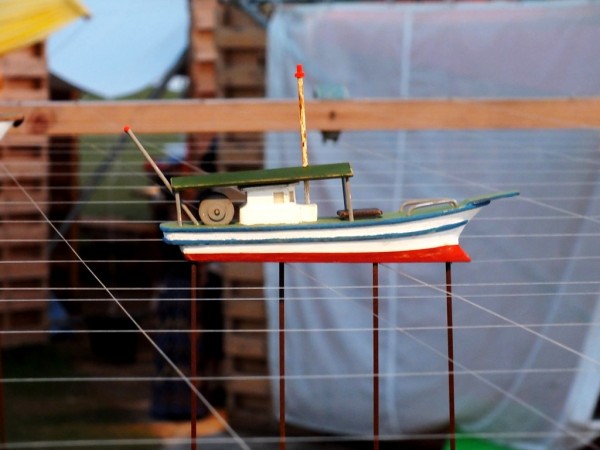 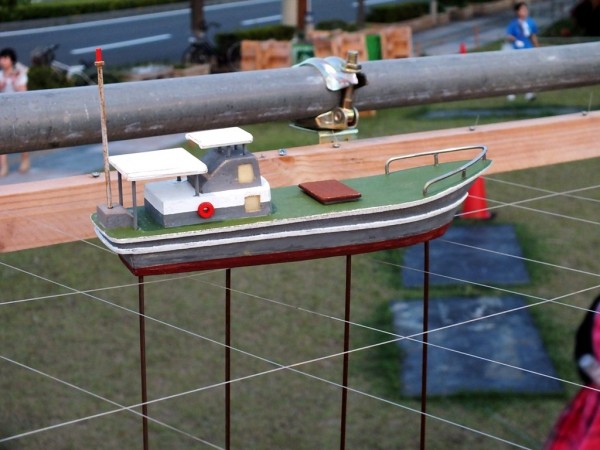 A few weeks ago, I was afraid that Four Mirrors would never be finished on time, but as I also suspected reinforcements came in numbers (summer vacation being almost over and all that): 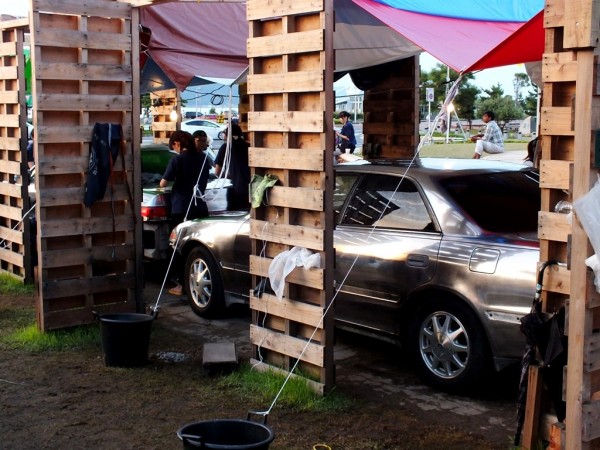 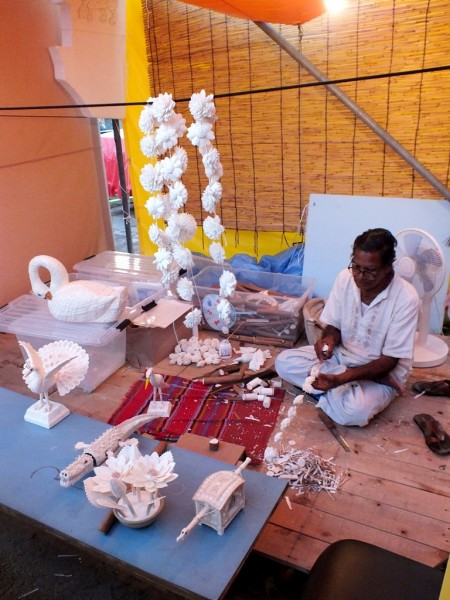 Nazir Hossain is probably one of the friendliest persons at Bengal Island. He always smiles, he’s always welcoming and always ready to have fun and make new friends, as much with visitors as with other artists. Strangely, even though we say hi to each other every time we see each other, we never talked. I’ll try to change that tomorrow. 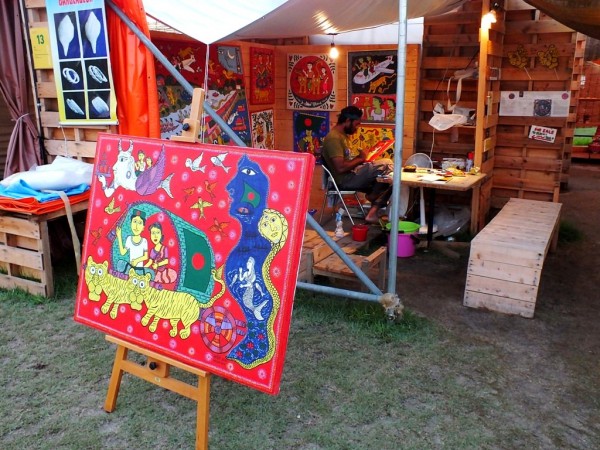 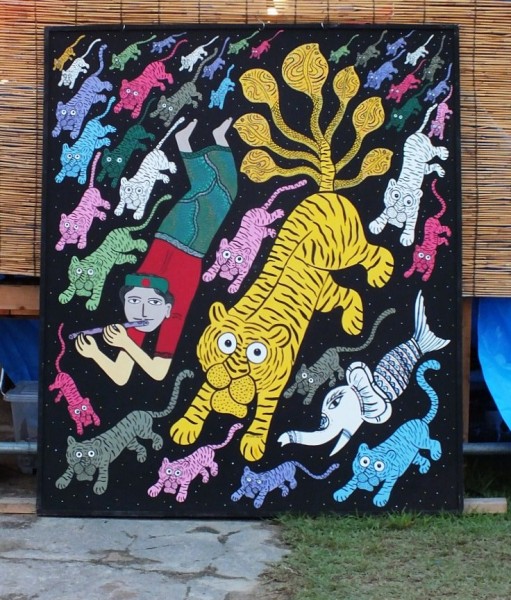 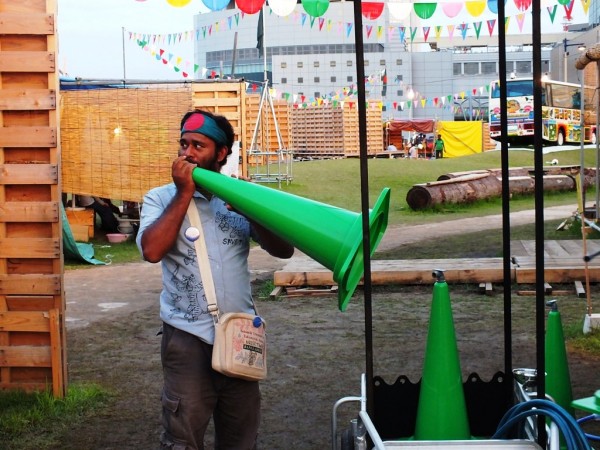 We ran into him later at the Junk Work booth, where he was testing some of their peculiar music instruments. 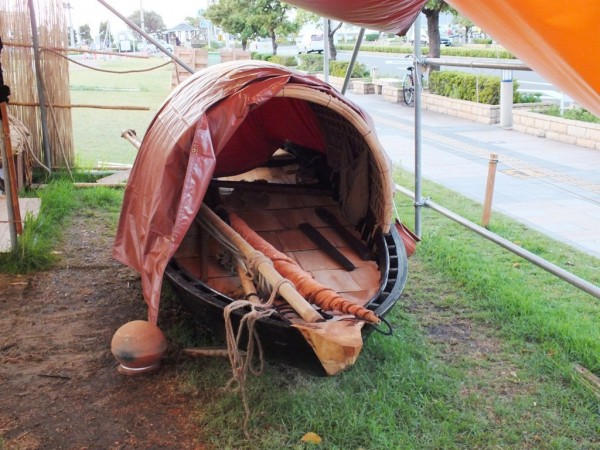 A few hours after its launch, the Bangladeshi dinghy was back at Bengal Island, where it’ll be exhibited until the end (then it’ll find a more permanent place somewhere else, I’m not sure where yet, I’ll investigate). 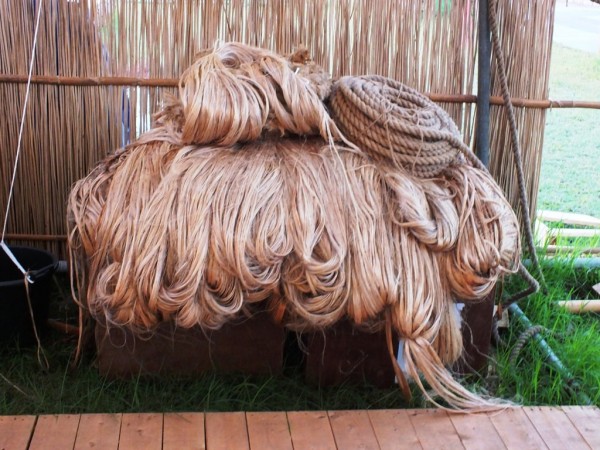 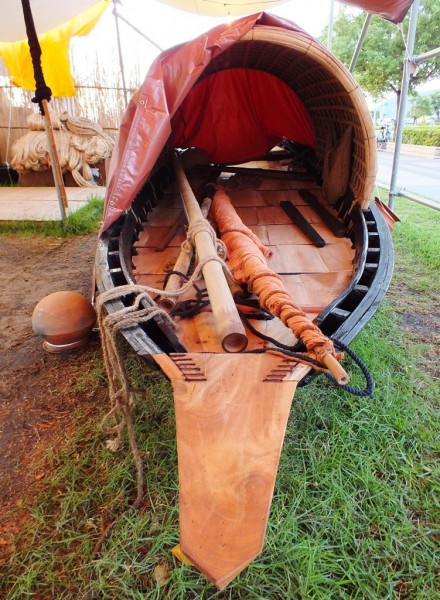 If no one was there, it’s because Vojon and Muhammad Abdul were most likely packing, and Wasama was all over Bengal Island saying goodbye to all the friends he made there, as they left Takamatsu that same night, and Japan the following days. (Wasama, if you read this, I hope you all made it back home safe, and don’t hesitate to say hi in the comment section). 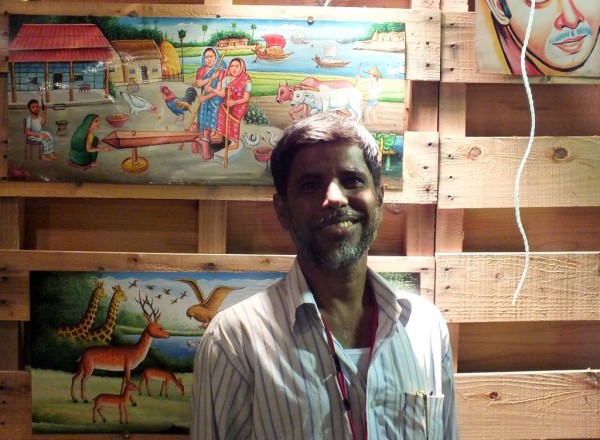 Rafik Islam paints the paintings behind him as well as the rickshaws that are all around Bengal Island. 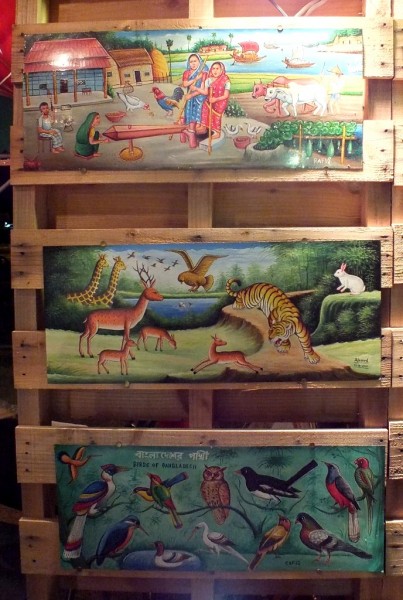 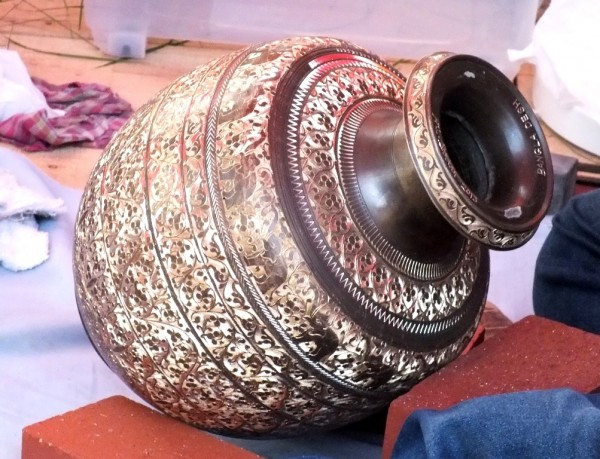 On the 26th, I also attended a concert (there are some everyday, but for some reason this is the only one that I shot) of traditional Bangladeshi music called Baul. I’m not sure if the band has a name, but the singer is Shamir Hossain and if I understood correctly, he’s somewhat famous among traditional music performers. His musicians are Ekram Hossain playing khomok and tabla hand drums), Muhammad Nazrul Islam playing traditional dhol drum), Ratan Kumar Roy playing four-stringed dotara) and Muhammad Hassan Ali playing bamboo flute. 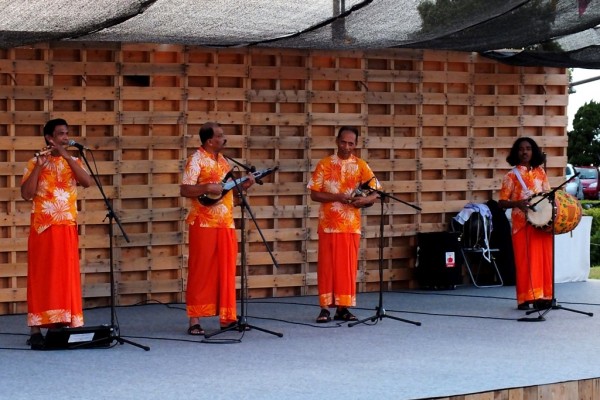 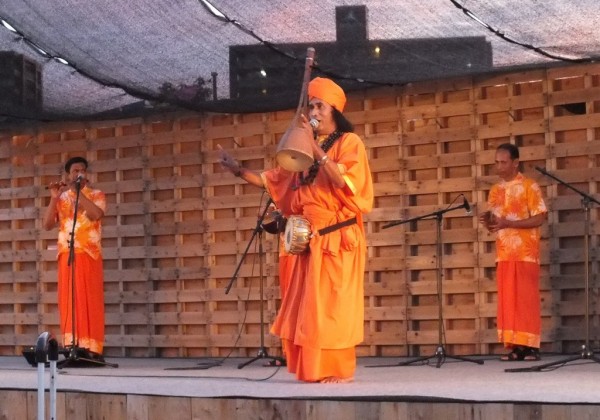 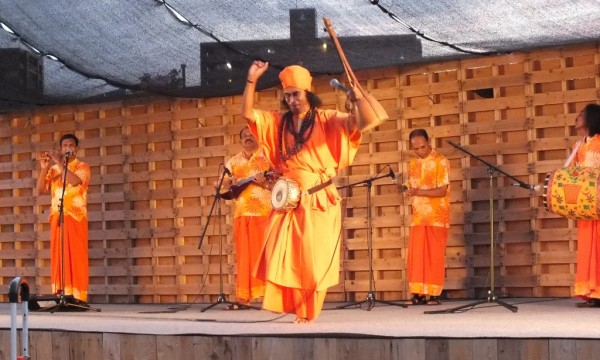 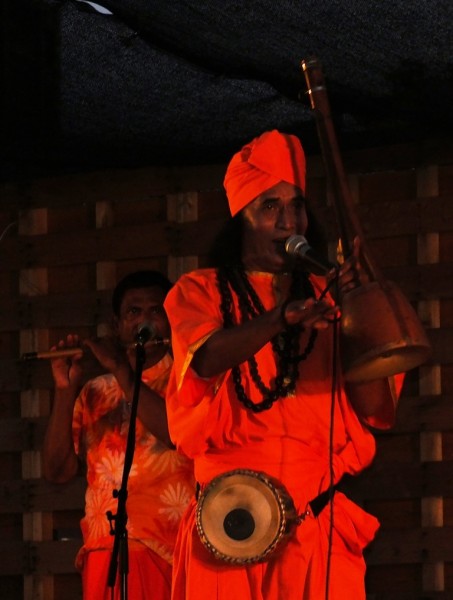 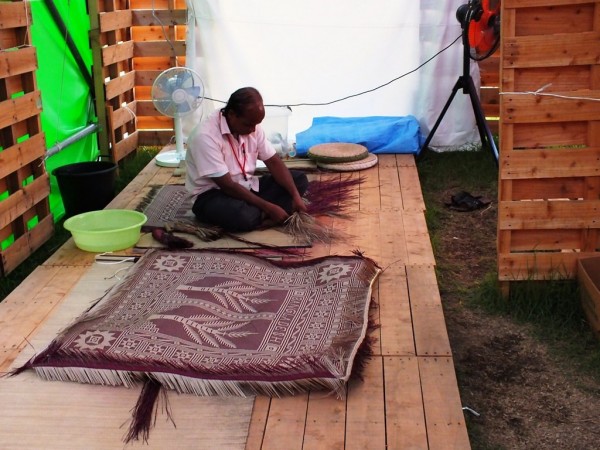 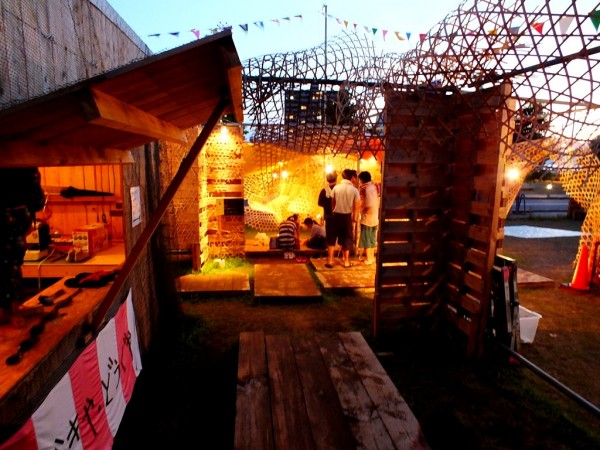 That’s all for today. Tomorrow, September 1st, will be Bengal Island‘s last day. Of course, I’ll be there (returning from Ogijima most likely). I don’t know what will happen yet, but I suspect that it will be charged with emotions.