Last June, on the 14th to be exact, I went to Zentsu-ji for the third time (but visited it only for the second time, remember, the first time around we didn’t stop more than a few minutes).

This time we went for a very particular reason, as it was Kōbō-Daishi’s birthday. More details about this event very soon (most likely the next post). Meanwhile, I’ll share with you a few more views and comments about the temple.

In case you forgot, Zentsu-ji is Temple number 75 of the Shikoku Pilgrimage, however it is one of the most important temple of that pilgrimage if not the most important one. It is definitely the largest one. It is also a major place for Shingon Buddhism as it is Kūkai‘s birthplace. Kūkai who is also known as Kōbō-Daishi and who is the founder of both Shingon Buddhism and the Shikoku Pilgrimage.

Oh, by the way, the real name of the temple is Byōbuura Gogakusan Tanjō-in Zentsū-ji, so you’ll easily understand why it’s usually just called Zentsu-ji.

So today, it’ll mostly be more pictures, I’ll try to avoid repeating the same things again from my first detailed visit and post about Zentsu-ji.

Just keep in mind that the temple is divided in two parts, separated by a small stream, a few houses and a street. The eastern part, the Garan, is quite similar to many Buddhist temples. The western part is the Tanjōin. This is where Kūkai was born and this part has some very original and fascinating elements to it.

Here are some of the things that you can find in the Garan:

Also, in this part of the temple, you won’t find one, but two sacred trees:

During this visit, I didn’t take any picture of the main building, the Kondō, but truth is that the most interesting elements (a big bronze Buddha, hundreds of little statues of monks and a Gokosho). If you want more details, I can refer you to muy previous post about Zentsu-ji.

One of my favorite things in the Garan is that its perimeter is surrounded by dozens of statues, each one of them being unique and fascinating. Here are a few of them:

In the Tanjō-in, the western part of Zentsu-ji, you can see the following things (among many others):

As I already told you several times, it is forbidden to take pictures inside most Buddhist temples in Japan. However, I couldn’t resist anymore, I cheated! These are pictures of the Mieidō‘s main room, but I actually took them from the outside, through a window. They’re not good pictures, but with all the “risks” that I took for them, I cannot not share them with you:

Let’s end our visit today with a few very interesting statues. These are 12 Buddhist gods, each one of them corresponding to one of the 12 Chinese zodiac signs. I can’t really tell you anything else about them. 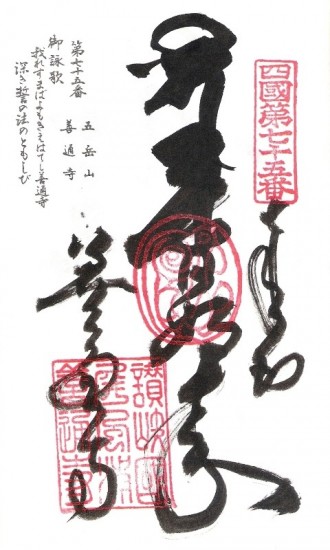 2 thoughts on “Back to Zentsu-ji”