I already briefly mentioned Zentsūji before, but now is time to tell you a bit more about it.

Zentsūji is a Buddhist temple located in the town of the same name in the Kagawa Prefecture. It has several particularities, one of them being that it is the first Buddhist temple I have ever seen. It is also one of the 88 temples from the Shikoku Pilgrimage, and even though it is number 75 on the list, it is one of the most important ones, if not the most important one.
The reason for this importance is simple, it is said to be the birthplace of Kūkai (also known as Kōbō-Daishi) in 774.

Kūkai is the founder of the Shingon branch of Buddhism, of the Shikoku Pilgrimage and the inventor of the Kana.

The temple is said to have been founded by Kōbō-Daishi himself in 807.
It is today one of the most important temples of Shingon Buddhism along with Tōji in Kyōto and Kōyasan in Wakayama.

And while it is not as big and as impressive as some of the more famous Buddhist temples in Japan, it is still very memorable. The fact that its size is more “human” is actually a factor playing in its favor.

Unfortunately, just like many other Buddhist temples, pictures are forbidden inside the buildings, especially those buildings that house some artifacts that are more than a thousand years old.

However, I’ll include scans found on a flyer that was given to me in the temple along for the pictures I  took of the outside of the buildings: 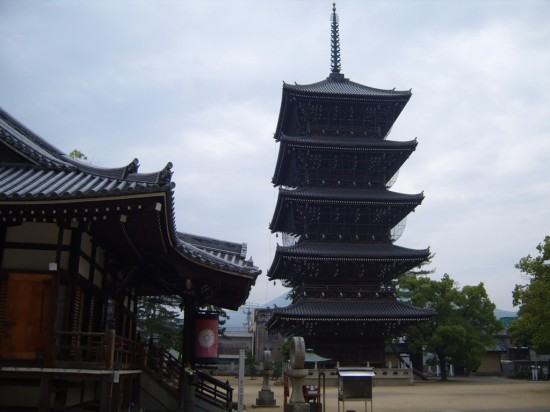 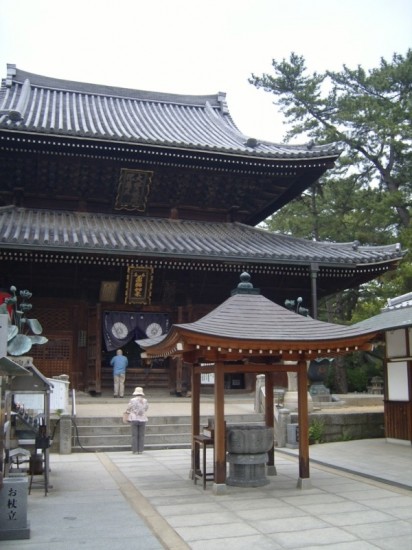 Inside, one can find three notable things: 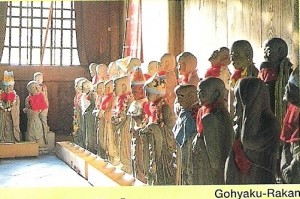 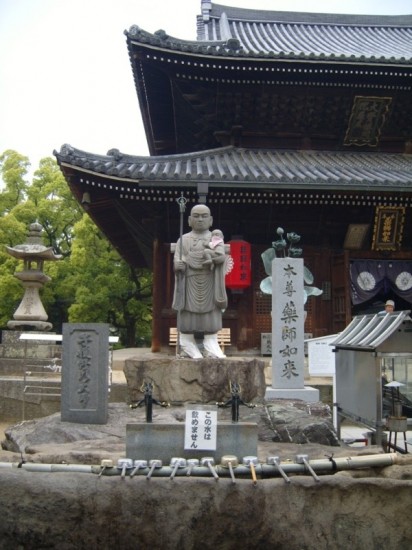 Kūkai in front of the Kondō. 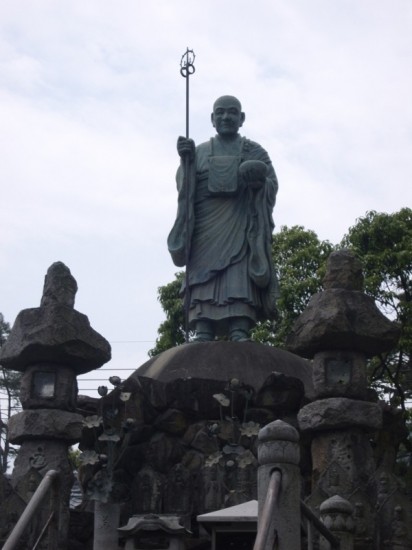 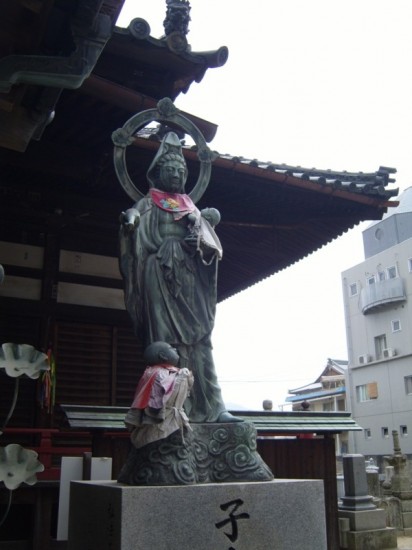 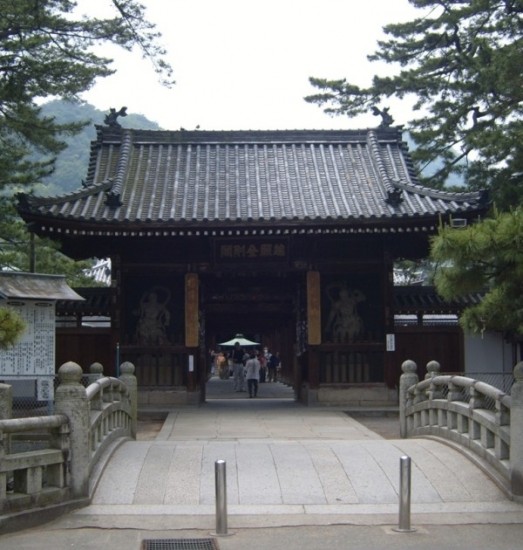 The Nakamon - supposedly the temple's main gate, however this one separates both parts of the same temple. 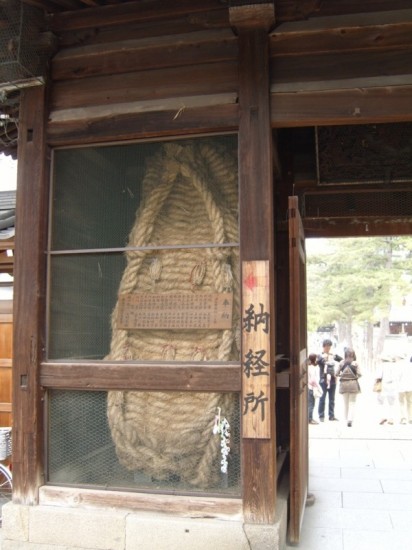 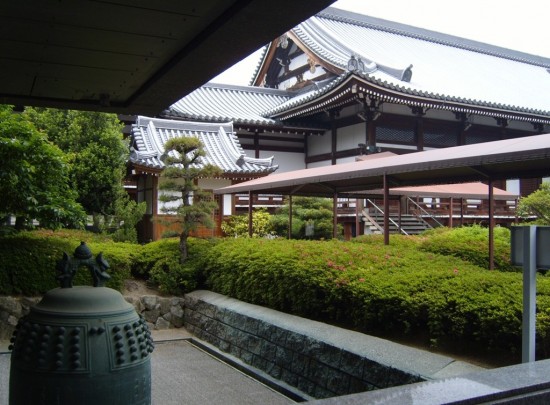 For some reason – don’t know which one though – I didn’t take any picture of the Mieidō, the other main building in the temple, the one built – according to the legend – on the exact same spot where Kūkai was born. The picture above was taken between that building and the Hōmotsukan, a small museum where Kōbō-Daishi’s relics can be seen: 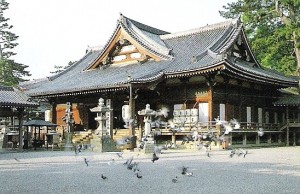 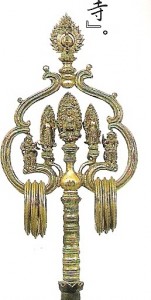 Now, let me tell you about one of the things that can be found in the Mieidō, or should I say under the Mieidō, in other words, the Kaidan-Meguri.
It is an underground corridor (both its entrance and its exit are located in the Mieidō) that one walks in complete darkness. To find your way, you simply walk, always touching the wall on your left-hand side. You’re are totally blind when you do that. Along the way, your hand will touch 37 Buddhas painted on the wall, you won’t see any of them as you’ll be totally blind at that moment. Halfway through, you will arrive in a dimly lit small room.
This room is said to be Kōbō-Daishi’s exact birth spot, two mandalas are painted on the wall facing you, and it is one of the most sacred spots in Shingon Buddhism.
I will have a hard time explaining the various significances of the place, and yet, it was a very intense, unique and amazing experience to live. 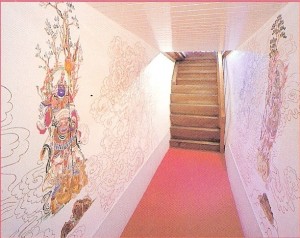 Kaidan-Meguri's exit (lit for the occasion) 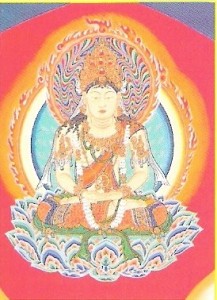 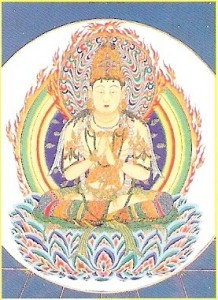 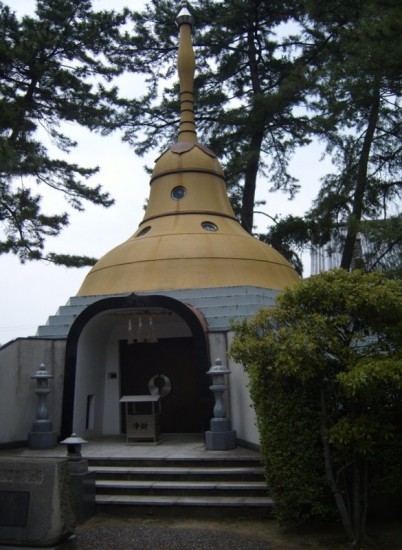 If I understood correctly, this building is dedicated to the memory of the Japanese soldiers who died in Myanmar. 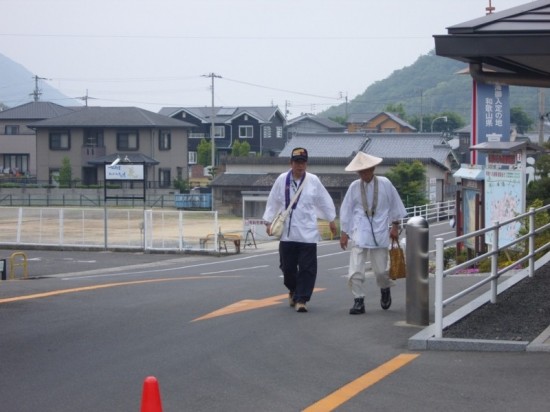 Two Henrosan, although judging by their clothes and their equipment (or lack of thereof) I suspect that they don't walk the pilgrimage (but drive it most likely)

(this was from my first – real – visit to Zentsūji in May 2010, I will very soon tell you about the visit I did last June which was also very special)