Walking in Circles by Todd Wassel 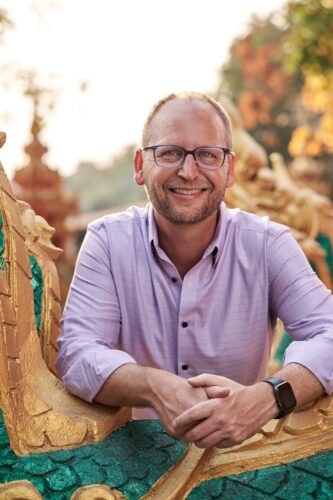 Walking in Circles: Finding Happiness in Lost Japan is a book about the Shikoku Pilgrimage. Or rather, it’s a book about a young man in his late twenties walking the pilgrimage for the second time in his life. It was published last year and was written by Todd Wassel. This man here, on the right:

Full disclosure: while we never physically met (that’s the magic of the internet) Todd is an old friend. We’ve known each other for more than 10 years, and in all honesty, and even if he’ll deny it, I’m not sure this blog would exist in its current form if not for him.

With that being said, my review of his book right here and right now is not something he asked me to do. And if I didn’t genuinely love the book (spoiler alert: I loved the book), I wouldn’t write about it.

So now that this is out of the way, let me tell you a little what this is all about.

As I mentioned, it’s the true story of a young man walking the Shikoku Pilgrimage. This young man is Todd himself and long story short, he walked the Pilgrimage not once, but twice. Once in his early twenties, when he was a clueless young adult fresh out of his native country (the US), discovering life and Japan. Then, he walked it a second time, nearly a decade later (and a little more than a decade ago), older, more mature, but also in search of the meaning of life, or at least of himself.

He definitely found the latter, and probably the former too. In any case, it definitely helped him grow into the man that he has become. Would he have the life and career that he’s having today without the Pilgrimage? It’s not for me to answer, but I suspect that things would be different. What does he do by the way? Well, we can describe his career as being an international conflict resolution and aid worker as well as an overall do-gooder (I wouldn’t be surprised if he also was a superhero in disguise). 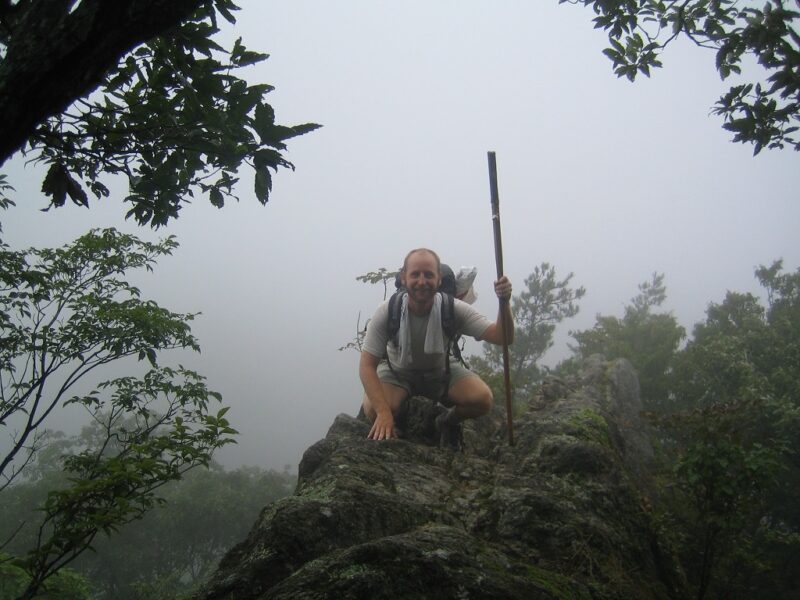 Portrait of the author as a young man walking the pilgrimage.

The book is non-fiction, and yet, it reads like fiction. It’s not a guide to the pilgrimage, this is not a “how to walk the whole thing and win it all” recipe. It is first and foremost the story of a young man in search of himself. While it’s not fully a Bildungsroman, it’s never too far from being one.

I think the fact that he walked the pilgrimage twice and that he wrote about this second walk is what helps to give the book this very unique tone and approach to the Shikoku Henro.

See, when I read Westerners writing about the Shikoku Pilgrimage –  more often than not – I find the tale a bit too rich with exoticism, forced mysticism, and whatnot. In other words, they’re often full of too much orientalism. I can’t fully blame them, Japan often does that to people who discover it for the first time. Or, at the other end of the spectrum, the story can be pretty much all about the physical performance of that walk and not much else. Some people do undertake the pilgrimage solely as a physical challenge. Good for them, they impress me, but it’s not really my thing.

You’ll find neither in Walking in Circles.

Oh, don’t get me wrong, it is the tale of a man looking for himself and walking an ancient pilgrimage in the process, so there is a layer of spirituality. A very personal one, I don’t think Todd was anymore Buddhist after the pilgrimage than he was before (he wasn’t).

There are plenty of descriptions of the Shikoku landscape, but they’re never the object of the writing, just the background.

As far as the physical challenge dimension of the pilgrimage, it is detailed in all its pain, exhaustion, and a bit more pain. But once again, it’s just a recurring motif, not the point of the story.

I think that it is thanks to his previous experience, his intimate knowledge of Japan, and also his own personality, that Todd manages to avoid all the clichés and beaten tracks of the “travel tale” genre beautifully.

The first thing I really liked about the book was the humorous and lighthearted tone. For most of the book, Todd can tell his story with enough distance and self-awareness that he never loses his sense of humor about it. And when things get serious a few times, their impact on the reader is all the stronger as a consequence.

In my opinion, the main focus of the book is not so much the physical space that Shikoku is, but the human one. And this is what makes me love this book, I think.

One quote I really like is that the pilgrimage is “much more than just a collection of roads and paths.” The rest of the paragraph goes on to explain how it’s a combination of the sacred and the profane, and also that both are sometimes hard to distinguish from each other on Shikoku. And this blurring of the lines between the two is always the most striking in the many encounters that Todd has along the way.

Every time he describes a new person, especially a local, it feels like I know this person, that I’ve met them before, somewhere on the island. I don’t only mean that the author can breathe life into his characters to perfection, but that he really grasps what the people walking that trail, and around them, the people of Shikoku, are like – what they’re all about, be it a passion for beer or one for helping strangers because this is what they do, all over the island.

Some readers not familiar with Shikoku will think that the descriptions of some of the people met along the road are most likely a bit exaggerated. I can tell you, they’re not. This is who Shikoku’s people are.

Shikoku is a unique place, different from the rest of Japan because it’s been shaped by this pilgrimage for 1300 years. A small island, with some of the most remote areas in the country. If you don’t know better, you’d imagine that it’s not the most welcoming place for strangers, especially in the countryside.

Actually, it’s the total opposite. This island has been welcoming strangers for 1300 years. Strangers who used to come risking their lives in order to walk around their island (OK, you won’t risk your life much nowadays, but you’ll still risk your health if you’re not careful or if you’re unlucky). Welcoming strangers is the raison d’être of a lot of people on this island. It’s in big parts why I fell in love with this place when I first came here 12 years ago. And Todd translates this mentality to perfection.

Shikoku is about its people, more than its mountains and its temples.

And I think that on top of the fascinating story of this young man trying to walk a grueling 1200 km-long path in a month, this is why I love this book. It understands Shikoku. 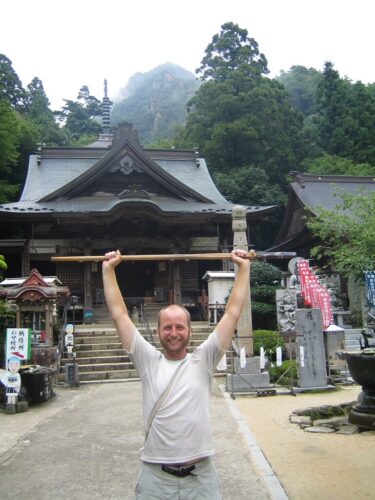 Maybe readers who don’t live in Japan will want and expect more “Japaneseness” in the book, but don’t get mistaken, what you’ll get instead is pure “Shikokuness.” People, are the soul of Shikoku, in all its beauty and also sometimes its not so beautiful sides.

Not everything is perfect on the island. Not everyone is kind-hearted. Not every encounter is a positive one. But even the negative encounters have a colorful dimension, somehow. And the negative ones underline even more the beauty of all the kind-hearted people who helped Todd on his way.

As a local, while reading the book, I sometimes wondered how people not too familiar with the island would apprehend it. But the more I read, the more I realized that this book is really for all of us. The locals and the outsiders.

It also made me realize that the Henro pilgrims are the perfect junction between these two groups. They’re both locals and outsiders, and at the same time, they’re neither.

This book is also very instructive in that aspect. As I said, it’s definitely not a “how to walk the pilgrimage” guidebook. It’s more a “what’s happening to these people wearing white and a conic hat before and after you’ve crossed their path on the road.”

OK, I could go on for a few more pages (while I’m a bit rusty, remember that my academic background is all about dissecting books, for hours and hours and hours), but I’ll stop here. If you’re still reading at this point, I’m sure I’ve convinced you, so let’s stop here, just go to your favorite online bookstore, and buy Walking in Circles.

You’ll thank me later, but you really should thank Todd. 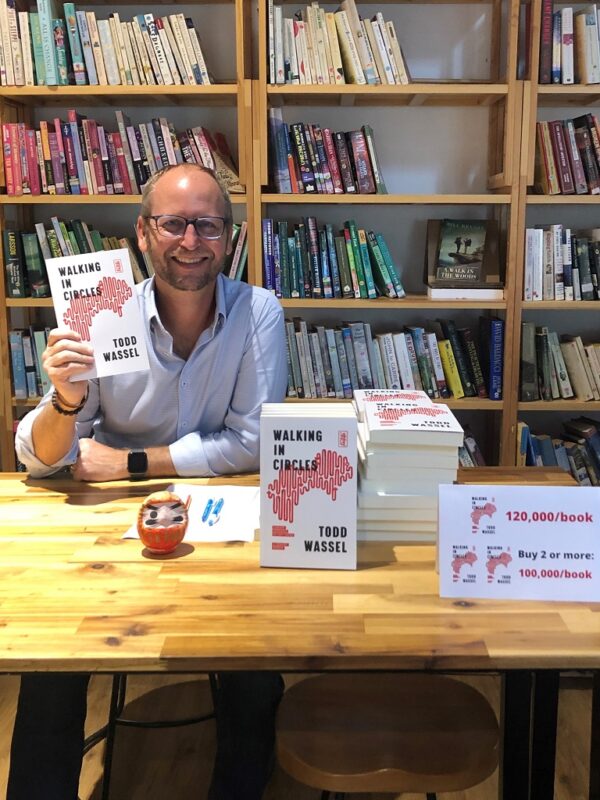 Pictures courtesy of Todd Wassel, do not reproduce, copy or do anything else with them without his prior approval.