… and cultural differences sometimes show up where you expect them the least.

On political posters for example.

First, while the campaign for the elections has started, know that posters of local politicians are to be seen in the most random spots all year long, not just during election time (the picture below was actually taken back in September).

Next, I previously lived in two countries where – while political campaigns are very different from each other – posters follow the same visual codes for the most part (the candidate looks serious, hopeful, looking towards the future and whatnot).

And then, there is Japan, where one can stumble upon such posters: 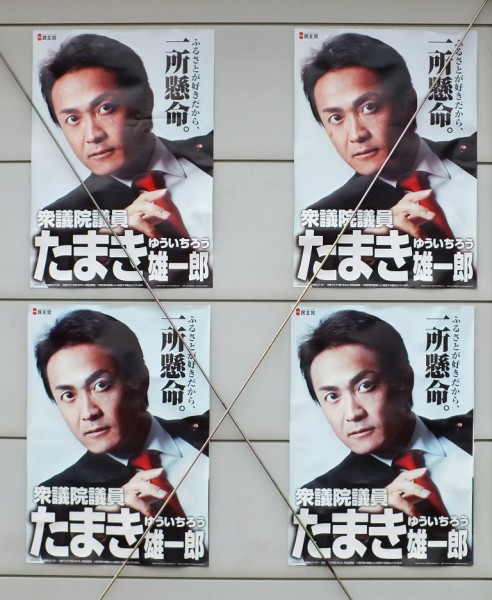 On some other posters, that I hope to show you later (when I have the time to take a picture of them), I see what the candidate is trying to convey. Here I’m not too sure.

Apart from that, the guy is Yuichiro Tamaki, he’s a member of the Diet for Kagawa Prefecture and he belongs to the DPJ (Minshutō). I don’t really know anything about him, Japanese politics is still something I don’t understand that much, although what I think I have understood about it is that it’s pretty hopeless in many ways (like changing Prime Ministers every year, having a party being in power for 50 years, and soon to be returning to power because the party that finally managed to take over has been incompetent and weak)…