I have some good news and some bad news.

Let’s start with the good news.

The Setouchi Triennale 2016 Official Guidebook is finally available in English! 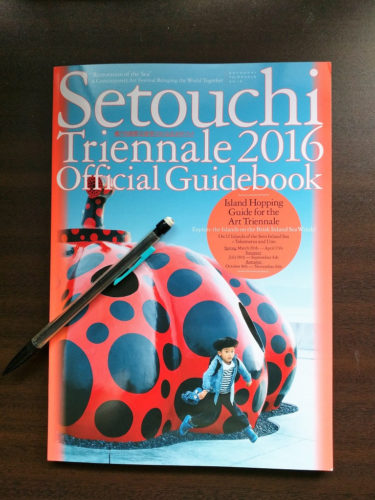 Let’s start with the good things.

It covers all of the islands and all of the artworks. It includes a bunch of practical information that will turn out to be very useful for most visitors of the Setouchi Triennale, especially first timers: ferry and bus schedules, bus routes, artwork locations and so on.

The odd thing. The size of the book is a bit unusual. It’s much larger than its Japanese counterpart. So if it’s easier to hold in your hands and read at home, it’s much less convenient and practical when you need to take it in and out of a bag, flip through and its pages and more while you’re on site.

The thing that’s very annoying but unfortunately quite common in Japan, I’m afraid. It’s incomplete! The original version has much more content. We go from 300 pages in Japanese to 185 in English for an almost identical layout. Also, don’t forget that because of kanji, generally speaking, Japanese books are usually thinner than the same book in another language. Not this time.

A bunch of very interesting things have disappeared from the English version; artist interviews, a few pictures, various tidbits about various topics (some are still there, not all), and more important – as we’re talking about a guidebook here – most of the places to eat and drink all over the islands are gone.

It is pretty unnerving, and it’s consistent with the impression that many translated things give me in Japan. The impression that the translated product doesn’t really exist to help foreigners (and definitely not to give them the same information as what is given to Japanese speakers), but rather for Japanese people to show themselves and each other how international they are. We always hear about “Cool Japan” whatever that means, but there is also a “Cool English” in the country.

“Let’s put some English here, it’s going to show (who? other Japanese people) how open to the rest of the world we are!”

OK, maybe I’m being a bit harsh here, but I believe that there is some truth to that.

Now, don’t get me wrong, not everyone is like that, and some people really want to make things properly, and actually be useful to foreigners, but they’re usually the ones who seriously lack the (financial or administrative) means to do it.

The book is a strange result of both.

If I understood right, the publisher didn’t want to hire the local translators who usually translate things related to the Setouchi Triennale, and the translators they used were probably outsourced from who knows where, but fact is that had no clue about the Triennale, probably had never heard of it before and translated as they could with a lot of guess work (a few months ago, one of them contacted me asking me to explain Takeshi Kawashima and Dream Friends Gallery). On top of that, some texts were just very badly written. Fortunately, some local translators could to get a glimpse on the unfinished product and tried to fix as much as possible in the little amount of time they had.

So the texts are very uneven, some are fine, some not so much… I even spotted typos.

I understand that the publisher (who I assume usually only published books in Japanese) won’t make a fortune from this guidebook, but maybe, just maybe they should have tried a little harder.

Oh well, let’s not be picky. In the end, there is an official guidebook in English and it is pretty useful for visitors. And that in itself is quite an achievement (there were no such things in 2010 and 2013).

I almost forgot. You can buy it on the Japanese amazon, as well as in the Setouchi Triennale shops around here. I don’t know if it’s going to be able in regular bookstores. If you see it, tell me.