If we left the Niihama Taiko Matsuri early, it’s because, not too far from there, about 10 miles away, there was an another Matsuri of importance going on: the Saijō Matsuri.

Just like its neighbor, it takes place every year, around October 15 and 16. This Matsuri is not related to one shrine, but to four of them in town (Kamo-jinja, Iwaoka-jinja, Isono-jinja and Iizumi-jinja).

The Matsuri usually starts at Isono-Jinja where the city 80 Danjiri gather, on October 15 starting at 1AM, and all night long until about 6AM. At sunrise, they divide n four groups, and each group goes to its respective shrine. On the next day, the 80 Danjiri parade all over town before gathering again by the end of the afternoon on the Kamogawa banks for the big finale. (note that the Kamogawa in Saijō is not the “Duck River” like it is called in some other places; it means something like the “Thickened River”, a more than approximate translation of 加茂川, if a Japanese speaker reads this and wants to correct me, please feel free…) 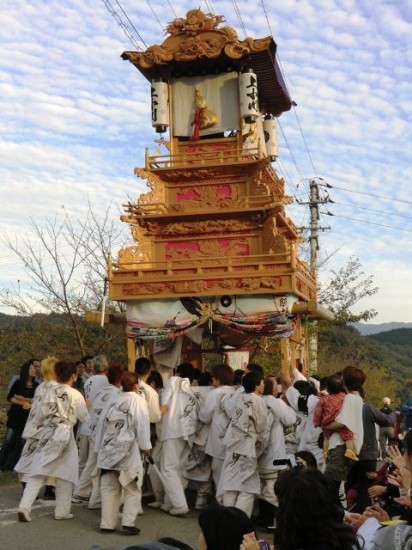 But, what’s a Danjiri exactly?

Well, you have the first part of the answer in the previous picture. I have already told you about Taikodai, and a Danjiri is not that different in the concept: it’s also a sacred float that belongs to a neighborhood organization that keeps it, takes care of it all year round and has the exclusive privilege to carry it for the Matsuri. They’re about 5 meters high (15 feet) and they weigh about 700 kg (1500 lb). About twenty men are needed to carry them.

We arrived in Saijō in the afternoon of October 15, a few hours before the grand finale, and we did see all the Danjiri arrive on the banks of the Kamogawa.

Once again, a small video tells more than a long description (pay attention to the change in the general atmosphere throughout the video, it only lasts 5 minutes but was shot over 3 hours):

As usual, it’s out of the question to let you go without a series of pictures:

As you can see on the previous pictures (of the attendance) one of the things I really like with Matsuri is that on top of the spectacular and exotic (yeah, I dare use that hateful word) aspects, they are events that everyone takes part in, that everyone enjoys and feels involved with at least as a spectator. In France (and in the Western world as a whole?), too often, there are events, festivals, parties that are for the younger ones in the population. Some others are for elderly people. Some more for families. But rare are those that are for everybody regardless of age, social class, education. In France, I don’t know of any public event that everybody expects with impatience all year long, a public even where you’ll see teenagers having as much fun as retired people do. Matsuri are exactly that.