This post will mostly talk about Battle Royale. You may find it interesting, or completely boring. I hope it will be the former.

If you don’t know it yet – which would be a shame – Battle Royale is a “multi media” story that takes place in an alternate world where Japan has become a totalitarian and imperialist republic and where junior high school students are selected to fight to the death on a small remote island. By “multi media” I don’t mean digital (as both words have become synonymous), I mean that the work has been existing under different formats almost since its beginnings. It first was a novel written by Koshun Takami and published in 1999, but as success quickly came, it was adapted both as a movie and as a manga as early as the following year. Takami wrote both adaptations. And if the premise makes of you think of Hunger Games, it’s basically because the latter plagiarized the former (yes, I know the author denies it, whatever).

Nowadays, especially in the West, it’s the movie that mostly famous, and like most people in Europe and the US, I first discovered Battle Royale through it (it remains to this day one of my favorite movies).

However, today, I will mostly talk about the novel and a manga… but not the manga that is the adaptation of the novel – rather, a manga that is a spin-off from the novel. Let me explain as it may be confusing if you’re not familiar with the publishing and release history of the various iterations of the work.

It’s a best seller and the following year, it is adapted both as a movie and as a manga.

And while we’re at it, I warmly advise you to both read the novel and watch the movie if you haven’t already done so (I wouldn’t write a full post, and probably another one sooner or later, otherwise). Concerning the movie, may I particularly advise the director’s cut as it gives somewhat more depth to some characters?
I do have more reservations about the manga. Actually, I started it years ago and never finished it. See, people who usually don’t know Battle Royale imagine it to be a work that’s all about gratuitous ultra-violence and they think that’s pretty much all there is to it, that is a work that it is of no interest for anyone older than 16 (and at the same time that is definitely not for anyone younger than 16). Nothing is further from the truth. Both the movie and the novel have a depth to them that you don’t expect at first. Those works and stories are powerful because the violence (and there is lots of it, don’t get me wrong) is depicted right next to more or less realistic portraits of those teenagers who are at the same time the perpetrators and the victims of this violence. This violence is never gratuitous and never glorified, quite the contrary indeed.
The manga – on the other hand – feels quite the contrary. While it may be fun to read for some, I found it somewhat shallow, the subtlety and complexity of some of the characters disappears, the violence and sex – yes, there is some sex too, not in the movie, nor the novel if I remember correctly – often feel very gratuitous. In other words, a typical seinen manga, that is, not my cup of tea.
So, as you see, while the novel, movie and manga were written by the same person and tell pretty much the same story, there are a bunch of variations from medium to medium. Variations in tone, but also in plot points as well as in character depictions.

Following the success of the first movie, of course, there was a sequel. You won’t miss anything if you don’t watch it. There’s also a manga adaptation of that sequel. I haven’t even bothered reading a single page from it. Note that Koshun Takami didn’t write either of them. This may explain a lot.

Finally, in 2014, a new manga was published. It’s called Angels’ Border. It’s quite short (it feels more like a traditional graphic novel rather than a manga). It tells two different stories that unfold in parallel to the main one and that focus on the girls from the lighthouse, two of them in particular. Also, an important point is that those two stories are spin-offs from the original novel, not from the movie nor the original manga. The first story mostly takes place at the lighthouse during the main Battle Royale events. The second one is mostly a flashback from before the kids are sent to the island, and it takes place in Takamatsu.
And if you’re still reading, you may start to understand where I’m going with all of that.

In the film, there is no indication whatsoever about the location of the island (and it was mostly shot in the countryside of the Kanto area – near Tokyo – as well as on one of those islands that are technically part of Tokyo but that really are located quite far from it, in the Pacific Ocean). However, in the novel, the location is very clearly established from the beginning; it’s on one of the islands in the Seto Inland Sea, and more precisely in the Kagawa Prefecture!

Actually, know that at the time he wrote the novel, Koshun Takami lived in Kagawa, and it is my understanding that he still lives in the prefecture. And yes, I do hope to get a hold of him one of those days. And who knows, interview him for the blog?

There’s even a map at the beginning of the book: 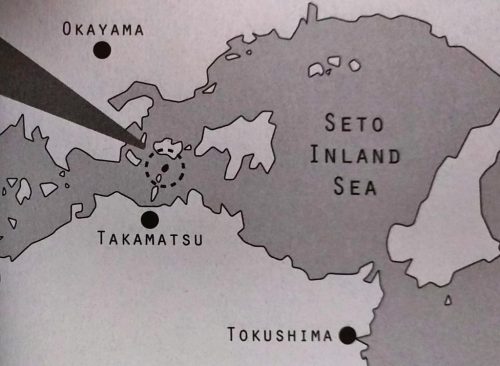 The island is imaginary, there’s just water where the black spot is located in the real world. If your geographical knowledge of the Setouchi area needs some brush up, know that the bigger island to the north is Teshima and the island roughly of the same size to the south is Ogijima. Also know that the Battle Royale island is called Okishima and if you know some basic Japanese, you will know that both Ogijima and Okishima are written using the same hiragana (sure, they’re usually written using kanji, but bear with me), that is おぎじま and おきしま, respectively.

And upon reading the book, it makes no doubt that the Battle Royale island is strongly inspired by Ogijima. And if you’re a long time reader of the blog, you may already know that this is the reason of my very first visit to the island almost 9 years ago.

Actually, as I started reading the novel again, I’ll try to find some good quotes that match places on the island.

As I previously mentioned, the 2014 manga, Angels’ Border takes place in the same universe as the novel, that means that the island described is exactly the same. That means that the manga too takes place on a island strongly inspired from Ogijima, to the extent that the artist, Mioko Ohinishi actually went to the island to draw some of her backgrounds. And as this manga is very good, I also warmly advise you to read it (however not before reading the novel or at least watching the movie).

And because you may not have the opportunity to read the manga while on Ogijima, I (almost) did it for you. I scanned drawings of locations from the manga and looked for the matching place (when it exists) in real life.

Expect me to do the same for the second story, the one that takes place in Takamatsu, as soon as it gets warmer, we’re going through a pretty cold winter at the moment, not one that makes me want to wander the streets of the city. However, once it is warmer, it’ll be an interesting hunt for me, as I have never been to all but one of the places shown in that story that takes place in a neighborhood that I’m not really familiar with, actually finding some of the locations may prove a challenge, we’ll see.

In the meantime, here is what I’ve found. 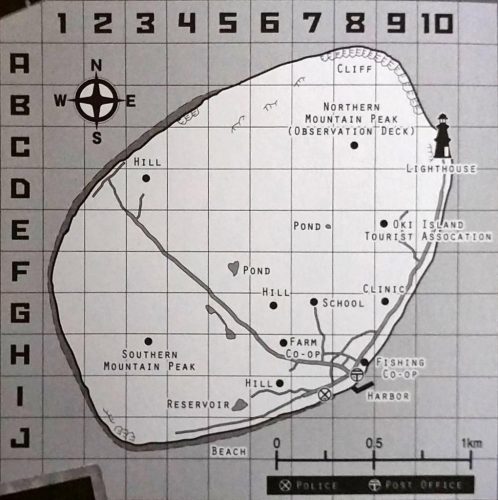 First, even if the fictitious island is strongly inspired from Ogijima, the layouts of both islands are actually quite different from each other. If you’re not familiar with Ogijima’s general geography, may I advise you to check it out on Google Maps?

The islands’ topographies are also different: 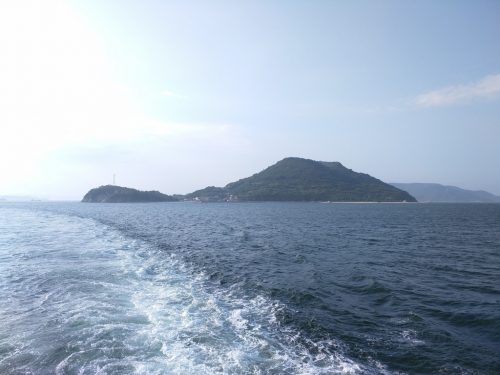 However, digging through old pictures of the island, I found this one I took during my very first trip there, and it’s taken from an unusual angle, and it’s quite similar to the drawing: 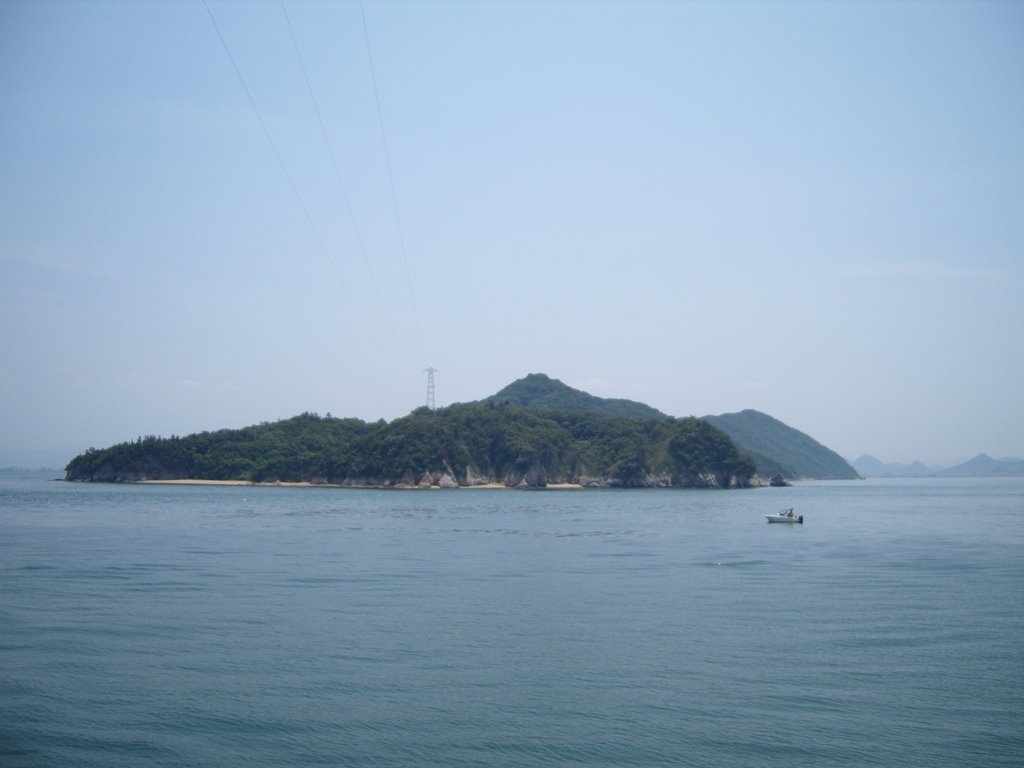 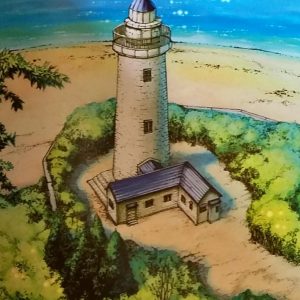 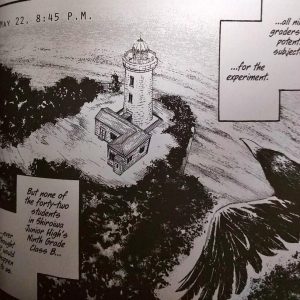 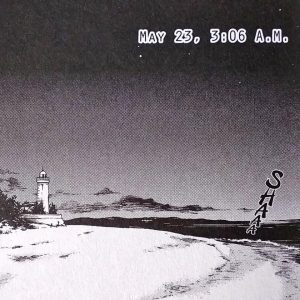 The first story from Angels’ Border almost entirely takes place inside and near the lighthouse, which is an important landmark, both in Battle Royale and on Ogijima. 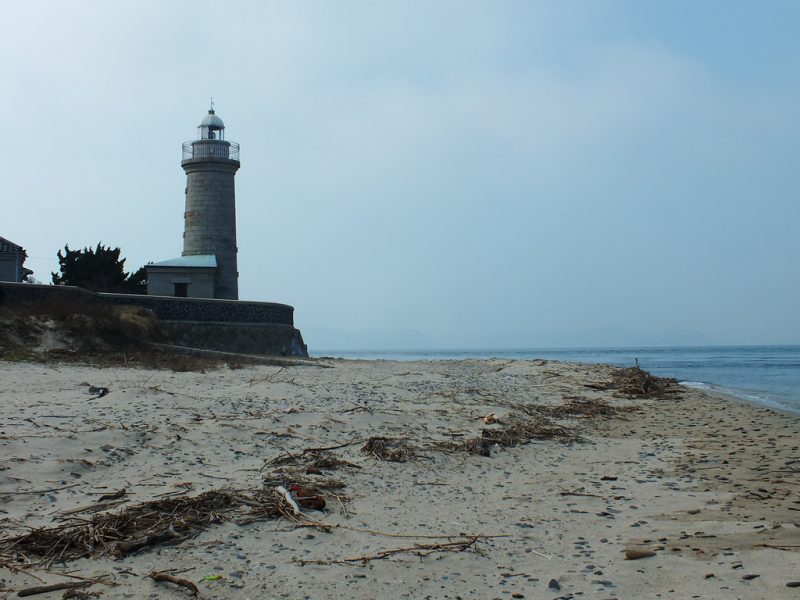 I was a bit too close to match perfectly the previous drawing. Oh well… 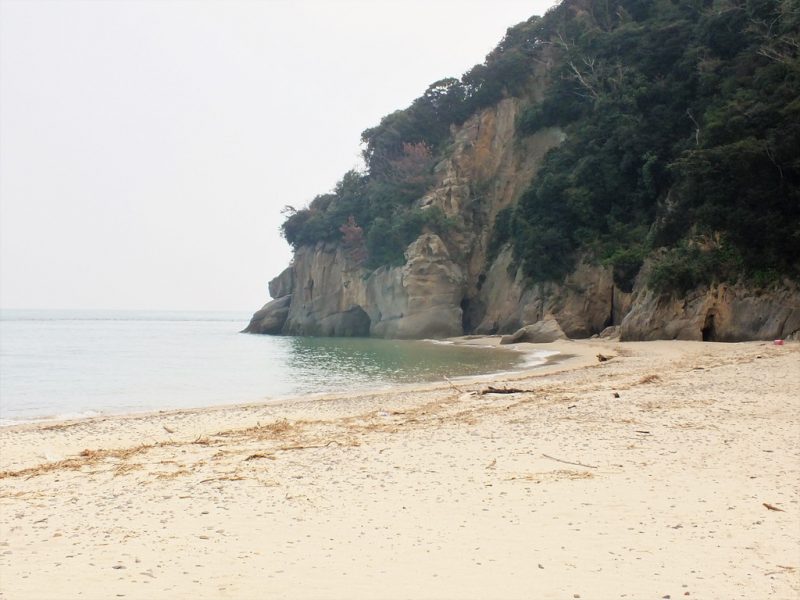 This is what you can see behind you, at the end of the beach. This will remind you of some other locations in both the novel and the movie. 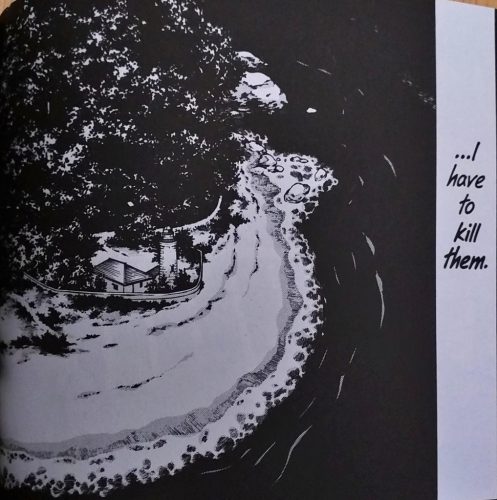 I don’t have a drone to be able to take pictures from a similar angle,
but once again, Google Maps can help. 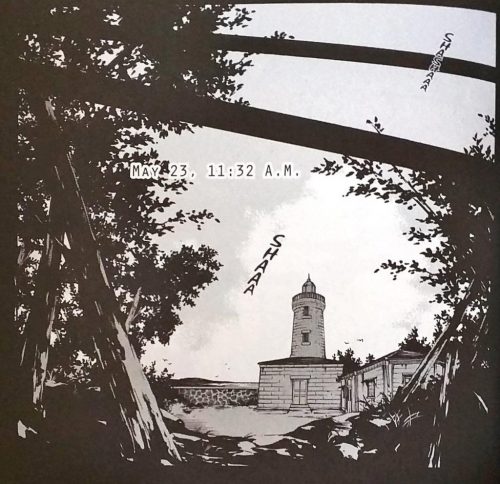 In both cases, when one is on the lighthouse’s grounds, one kinda feels in a small unique and enclosed space, cut from the rest of the world. 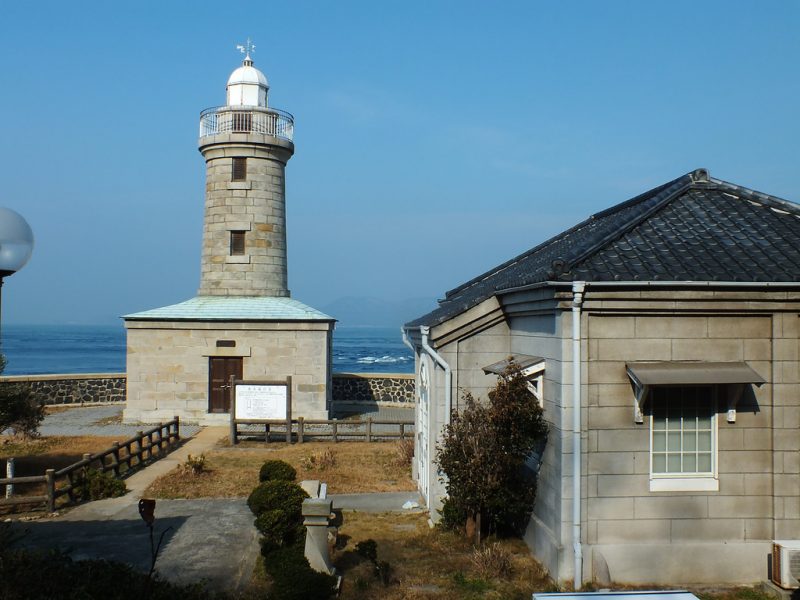 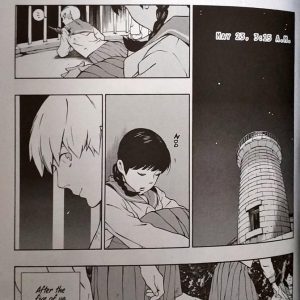 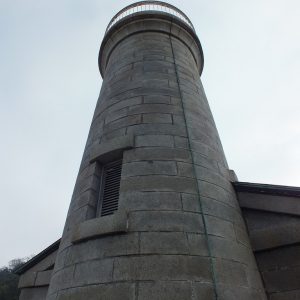 This first story doesn’t only take place in the lighthouse, there are a few scenes (not enough for my taste, as you can imagine) in other parts of the island. 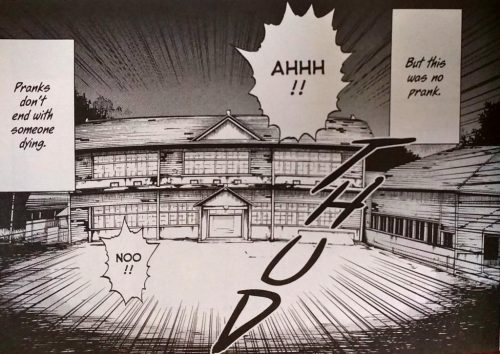 I didn’t take a picture of the actual school for a few reasons. First, it’s not allowed, in order to respect the privacy of the kids (by the way, some of the island’s visitors, especially the “cat tourists” seem to be struggling with the concept of privacy, please don’t be like them when you go to the island, don’t forget that it’s a real place with real people, leading real lives – it’s not your playground – because of them, “do not enter” signs have become common here and there on the island, and that’s a shame, because it should be self-evident that you do not enter private properties and places like schools). The second reason is that the school was recently rebuilt and looks nothing like this. However, the previous school building didn’t look like this drawing either. The artist used another building, somewhere else, not on the island, for this drawing.

Finally, only one drawing of a street from the village, but I recognized it instantly: 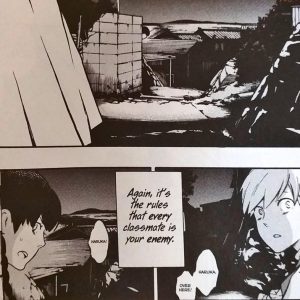 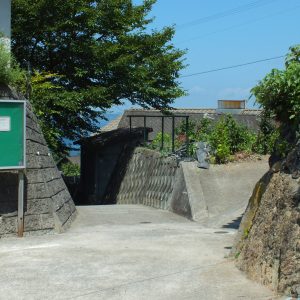 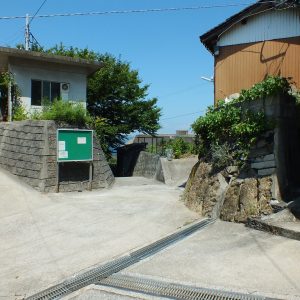 Now, testing your knowledge of the island, can you tell where this is? 😉

And that’s all for today.

Because I leave you, a small reminder if you want to know more about Battle Royale. The three works I warmly advise you are:

See you sooner or later with Takamatsu in a manga.