Back on Shōdoshima, there was this artwork called Lightening Shōdoshima (小豆島を輝かせる) that was composed of several projects and pieces spread over the villages of Hitoyama and Nakayama. Those projects were lead by Sense Art Studio, an artist group coming from Hong Kong. Here are their page (that has a great short video about the preparation of the festival) and their blog about the Festival (which isn’t being updated anymore and sadly).

What I didn’t realize until it was too late (read: I had left the island) is that it was a collection of many projects, I only saw the ones located in the old Hitoyama school and none of the ones in Nakayama. So these are the only ones I’m going to talk about here.

The first thing that needs to be said about Sense Art Studio is that their “mission” is to “gather people through art.” As such, their works asked for the locals and/or the visitors involvement and participation. An approach I’m a big fan of as you already know if you’ve read this blog before and know me at least a little. For example, in addition of the “physical” projects, they also organized a series of cultural meetings and events in and around the traditional Kabuki theater in Nakayama, during the whole duration of the Festival.

The first work I saw was part of 105 Days Red: A Lamp Shade Project.

About 40 red lamps, typical of Hong Kong were brought to island. Most of them were given to the people in the villages who were free to install them where they liked in their house, but in such a way that at night, both villages be sprinkled with red dots.

Nine of them had also been set up in the entrance hall of Hitoyama’s school that is now closed and that housed a few artworks (including Soil Library Project) : 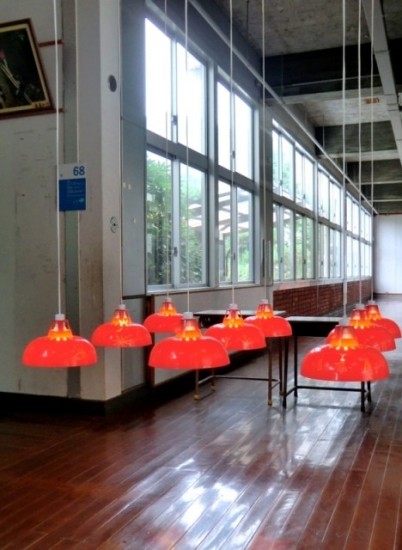 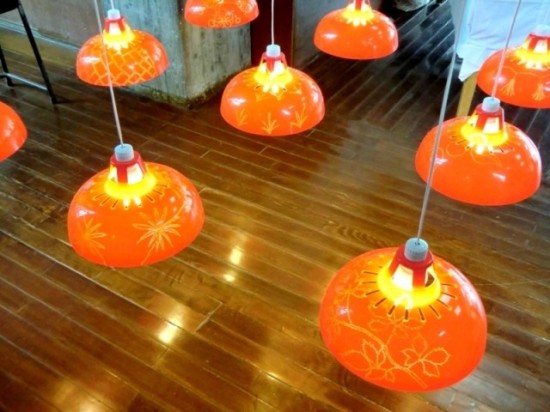 Not much more to say about it except that it looked cool.

Small amusing anecdote: you certainly already know that Japanese people are among the nicest and the most helpful in the world. To the point that they can sometimes be a little too helpful for my Westerner point of view and education. What do I mean? Oh, not much, except that where the lamps were installed there were a few volunteers working for the Setouchi International Art festival, just like in any indoor artwork or project. And while I was thinking about what angle I should shoot those lamps, one of the volunteers came to us and started showing me -quite assertively- what the best way to shoot the lamps was.
Of course, no need to mention that the angle that she was suggesting was not of my liking, very cliché and not taking into account the perspectives that interested me with this piece. However, that’s the good thing with digital cameras, we don’t have to worry about wasted pictures, so I took the picture she wanted me to take so that she leaves me alone and can take the ones I wanted to. I deleted hers later. I kinda regret it now, I should have kept it so that I can show it to you. Although, I’m sure if you look around on the internet you may find it in several copies, as I doubt I’m the only was who was “advised” by her. 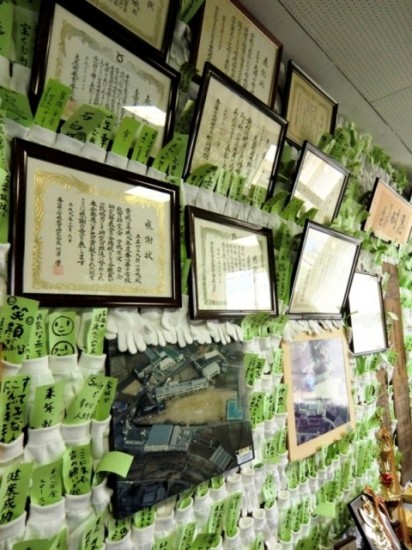 The other project, located a room away from the lamps was Walking Hand in Hand with History by Tsang Tak Ping. It was a “participative installation” (my words) that had been set up in the old office of the school’s director (I was surprised to see that old diplomas and other documents and pictures were still hanging on the walls, maybe they were put back for the Festival, I don’t know) and reminded me of Ema, minus the religious side as the whole thing was about taking a strip of paper and write (or should I say “paint, calligraphy style”?) your wish for the future on it. 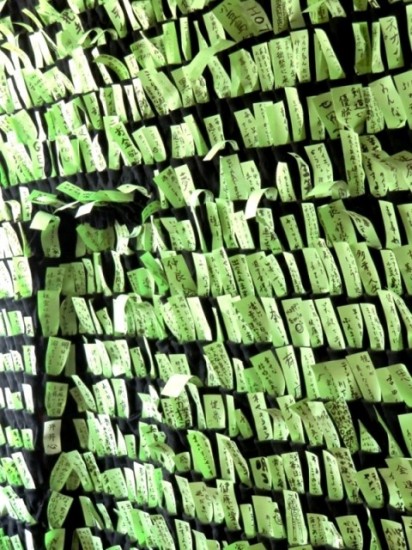 Once that was done, the slip of paper was inserted into one of the black wool gloves attached to the wall and -originally- one would get a white glove in exchange. Maybe a metaphor of the “hand in hand” dimension of the work. I say “originally” because as you know the Festival was much more successful than originally planned and they had run out of white gloves to give out when we visited. Actually, the few remaining ones were also used as receptacles for the green paper slips. Oh well… 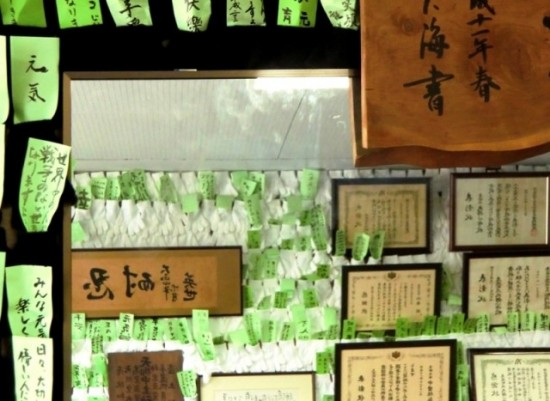 Oh, and by the way, if I know all of these things, it must be noted that it’s because one member of the staff in the room was from Hong Kong and she was the one explaining things to people (she also could speak Japanese). When she saw me I think that she was as happy as me to be able to use English even for a few minutes. I think 康代 too was happy to having to be a translator for a few minutes. And I too was happy to be able to understand things right away for once. See, this project made everybody happy. 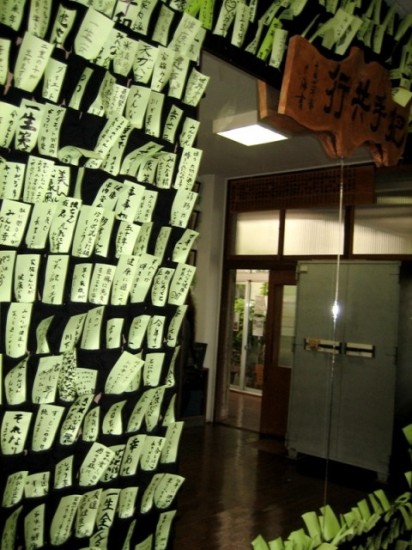 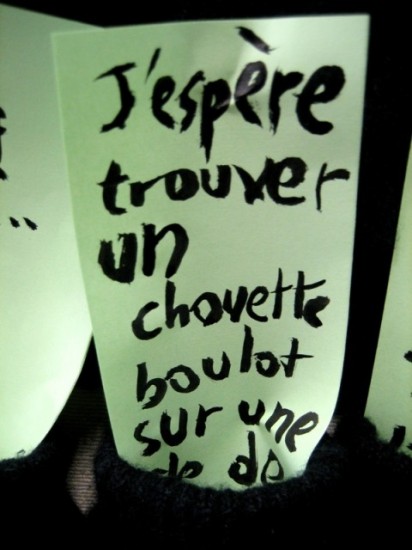 My modest contribution to the project. Before there is a misunderstanding between us, I must underline that my handwriting is not usually that bad (barely), it’s just much harder to write roman letters than Kanji and Kana with calligraphy ink and brush.

What does it say, you’re asking? Mmm… Maybe it’s time to brush up your French. Ok, I give in, it says: “I hope to find a cool job on one of the Seto islands” Corny? Maybe, but who knows, maybe one Kami will hear me. 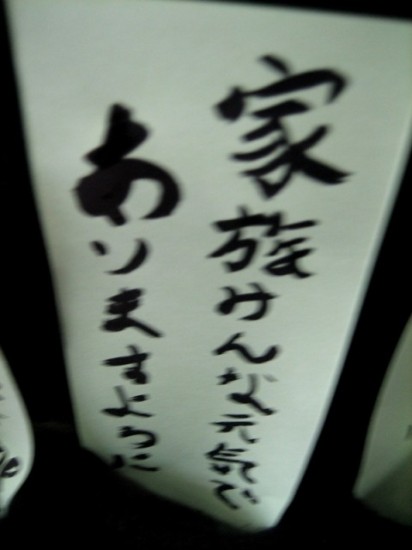 康代’s wish. She wishes that everybody in her family stays healthy. Yes, she’s a realistic down-to-earth woman, not pursuing unrealistic dreams like her husband.