How to go to Ritsurin Garden?

I don’t usually write “travel advice” posts, quite regularly when I see posts of people visiting Takamatsu and going to Ritsurin Garden, I think a few pieces of advice could come in handy. I heard it’s very beautiful at this time of the year.

I had never really thought about it before – maybe because the first time I visited Ritsurin Garden, I went by bicycle and guided by a local (康代) – but apparently, it’s not that easy to find it when you don’t know the city at all, and I have the feeling that some tourist guide books out there are a bit misleading.

Small side note: not the time and place for a rant, but by the way, stop using tourist guide books as if they’re the ultimate reference about the place you’re going to (especially if that place is not that famous – non-famous but fascinating places won’t be listed at all), most of them are written by people who spent barely more time than you in the place and who don’t know the city anymore than you do, they were just being paid to vacation there and write a few lines about it, while you have to pay to do it. Rant off.

So basically, I have the feeling that most people trying to go to Ritsurin Garden try to access it by train and get off at the JR Station called Ritsurin. I can’t blame them, it seems to make sense, right? Except that from there they’ll have the hardest time to find the garden, some of them will even get lost, and in any case, they’ll have to walk at least one kilometer if not more before finding Ritsurin Garden. Sure, it’s not that much, but with a station bearing such a name, most people expect it to be right in front of the garden. 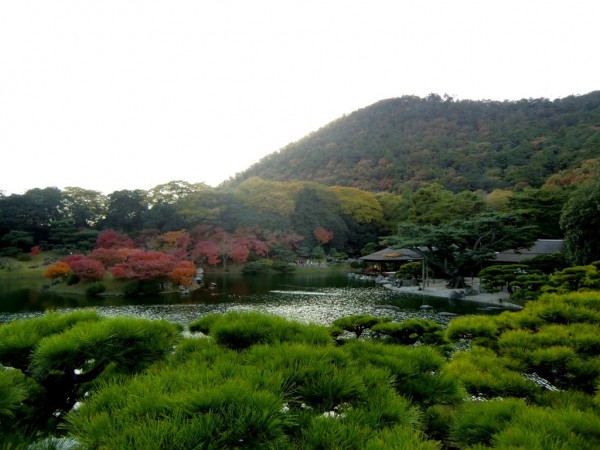 This picture is one year old give or take a few days, so Ritsurin Garden should look like this right now.

Honestly, I have no idea why this station is called Ritsurin, but what is sure, it’s that it’s definitely not the most practical way to go to Ritsurin Garden.

So what is the most practical way?

First, I’m not exactly sure the JR line is the best way at all, but I’ll understand if you want to take it because you have a JR Pass and you don’t want to waste money when you don’t have to.

If this is the case, you need to get off at the previous station (providing you’re coming from Takamatsu Station). It is called Ritsurinkoenkitaguchi (which means “Ritsurin North Gate”) and it is located less than 300 meters from the Ritsurin’s north gate. Sure, it’s not the main entrance, but it’s the easiest way. If you really want to enter through the main gate, it’s not that hard either, you’ll just have to walk along the garden’s limit for a few more hundred meters.

However, the best way to go to Ritsurin Garden by train is to not use JR but Kotoden – the local train company. It has a station called Ritsurinkoen (“Ritsurin Garden”) and from there you just need to walk straight ahead for a few hundred meters to reach the main gate of the garden (except if you go the wrong way, but I trust your sense of direction – hint: Ritsurin Garden is at the foot of the big hill in front of you). Kotoden has several stations downtown, including one right next to Takamatsu Castle (very close to JR Takamatsu Station). You just need to take the yellow line (not the green one, nor the red). 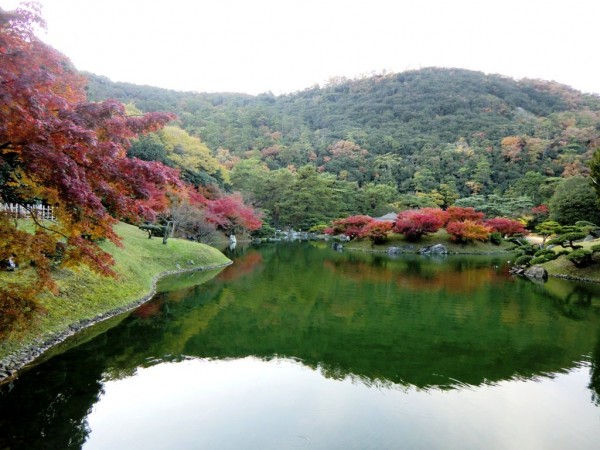 You wouldn’t want to miss this, right?

But with that being said, accessing Ritsurin Garden by train simply may not be the best way to do it. As the garden’s main entrance is located on Chūō-dori which happens to be Takamatsu downtown’s main street, many buses pass by there and there are a few bus stop in front of the park. Unfortunately I don’t know what line does exactly, but providing you’ll want to access Ritsurin from Takamatsu Station, many bus lines have their terminus there, so from there, you can easily find one that will (I know that ショッピング・レインボー循環バス – 西 does, because I take it at times, but there are others).

Finally, you can also ride a bicycle there (there are 100 Yen a day bike rentals in several spots in town) which remain probably the most pleasant way to move around town.

I hope you’ll find all of this information helpful and that thanks to it, you’ll spend more time visiting Ritsurin Garden than looking for it.

2 thoughts on “How to go to Ritsurin Garden?”