About a month ago (on February 11th) as it was a holiday, we went for a small day trip to Kurashiki in the Okayama Prefecture (by the way, it was and still is the only time I spent on Honshū since I’ve moved to Japan). We especially visited the neighborhood known as Bikan, which is a merchant neighborhood from the Edo Period.

Back then, Kurashiki was known as Tenryo and was directly controlled the Shogunate. It was a merchant town from where many local goods were “exported” (to Edo, I assume). At the time, the neighborhood was pretty much on the coast (today it’s about 10 kms inland) and many warehouses had been built along the Kurashiki river banks to load boats that would then depart at sea.

Those warehouses, pretty much all built in the same architectural style, still stand today and have been converted into museums, stores and numerous restaurants. 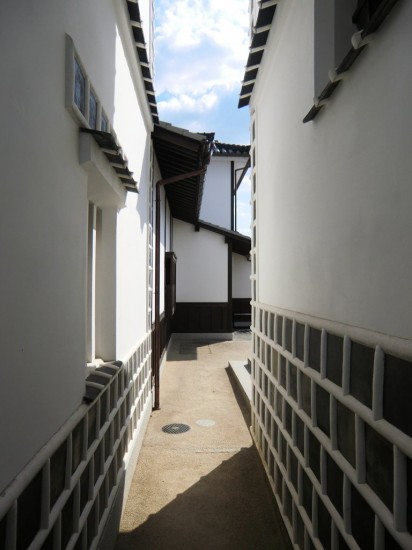 Bikan is full of small streets like this one... 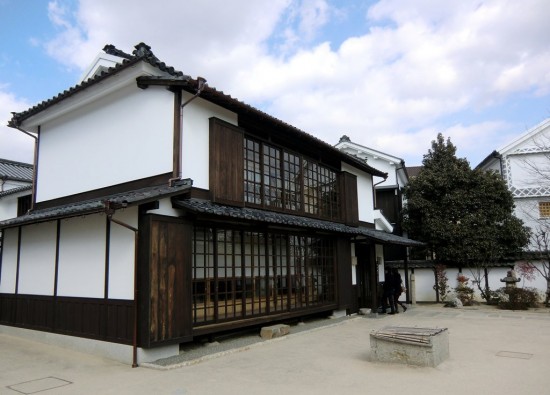 ... as well as houses and buildings like that one. 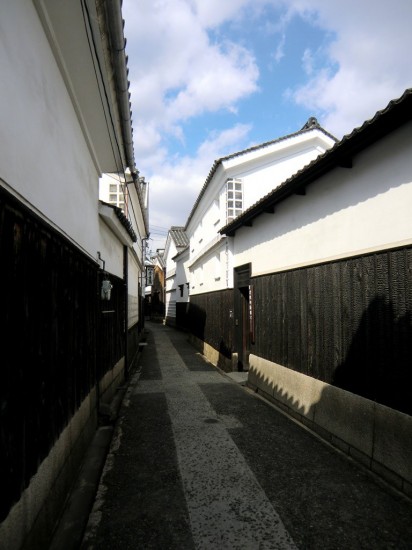 Walls made of burned wood. 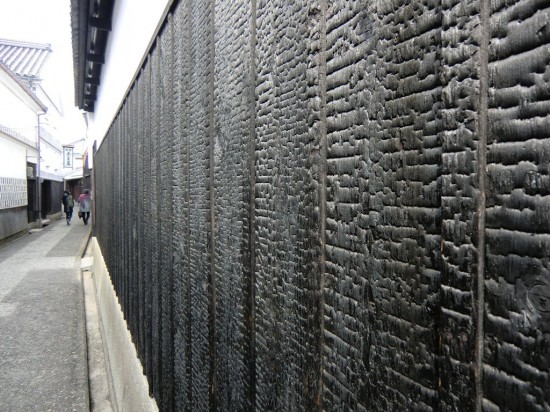 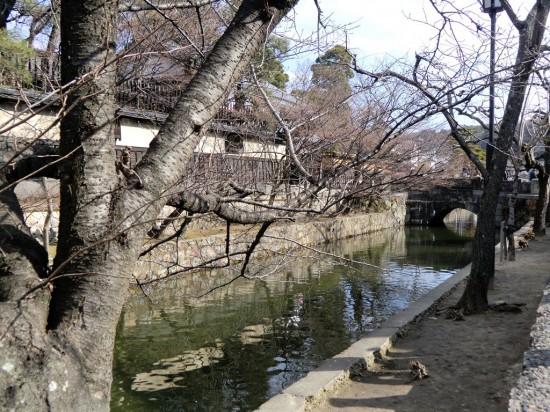 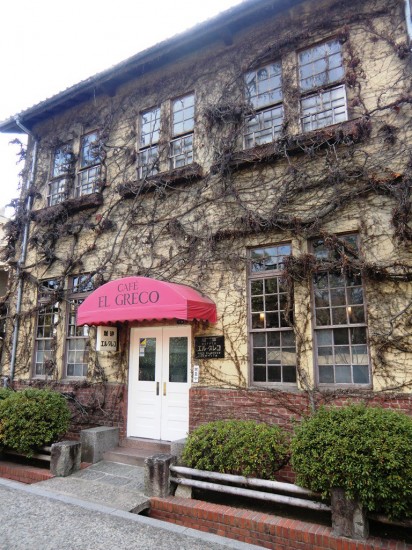 In Bikan, one can also find the Ohara Museum which was the first museum of western art to open in Japan in 1930. In the very beginning, one could only find French artists, but quickly many other European artists had their works exhibited in the museum and some cafés and boutiques seized to opportunity to adopt an “European” look (or at least names). Today, the museum also houses Japanese artworks by the way. 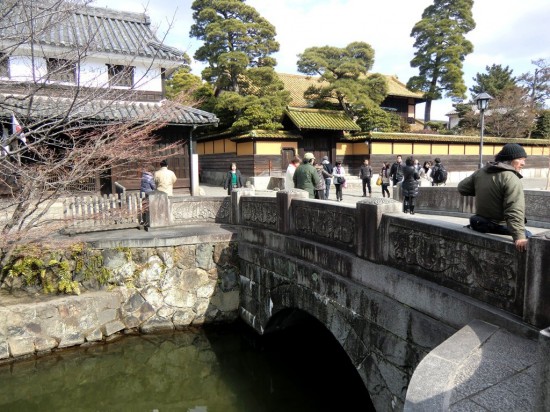 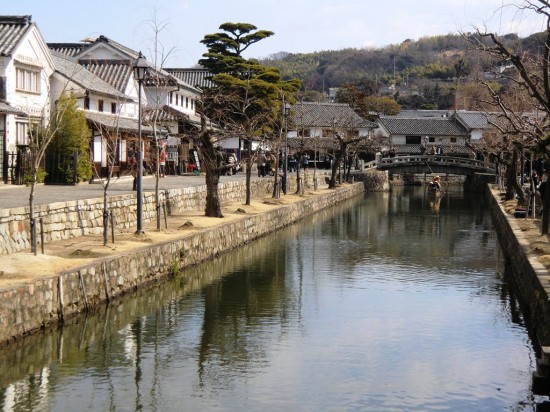 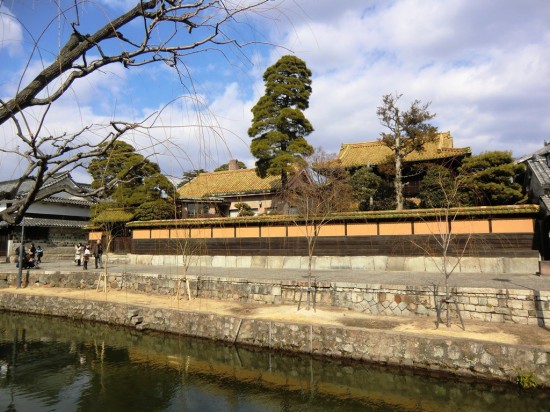 This building has a different architectural style from the other buildings in the neighborhoods. It is called Yorinso and belonged to the Ohara family (which as you can imagine was one of the most powerful or at least richest in the area). Its cooked tiles have a unique green coloration which gave its nickname “green palace” to the building. 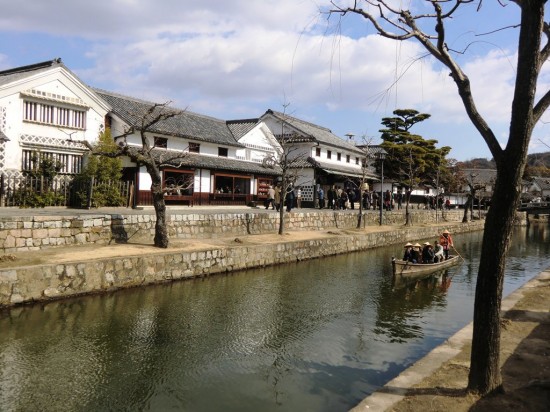 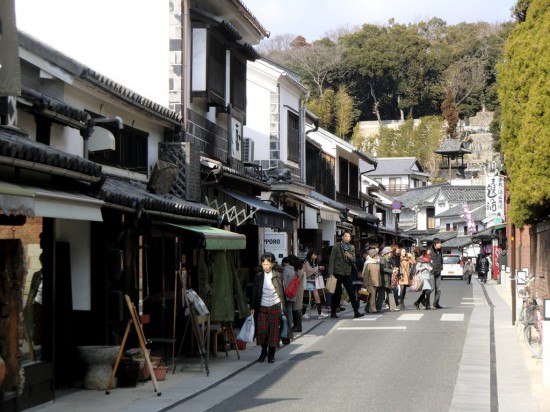 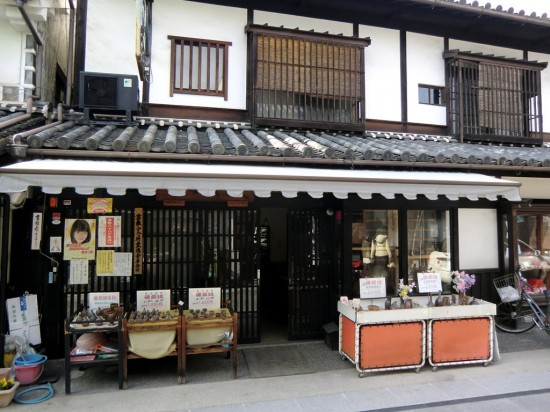 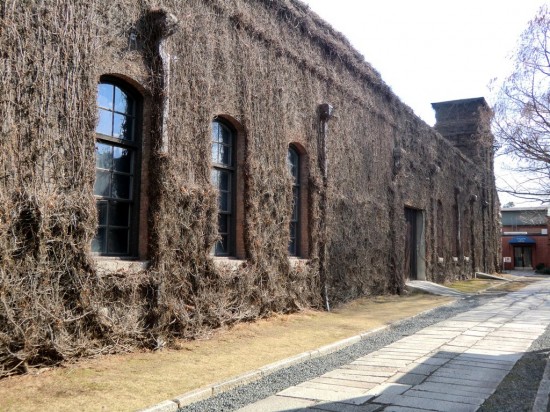 Another notable place in Bikan is called Ivy Square (for obvious reasons). It used to be a spinning mill (it is more recent than the rest of the neighborhood, about 1890) and is now a hotel, with restaurants, cultural spaces, etc. 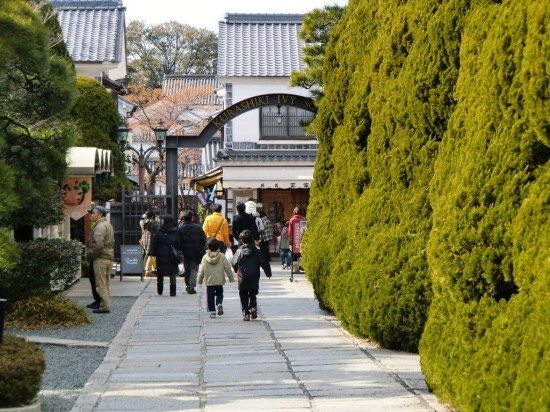 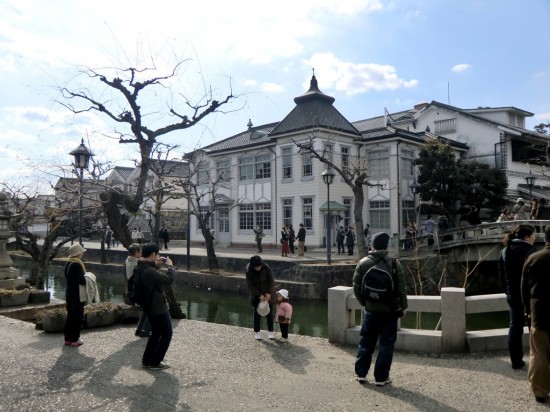 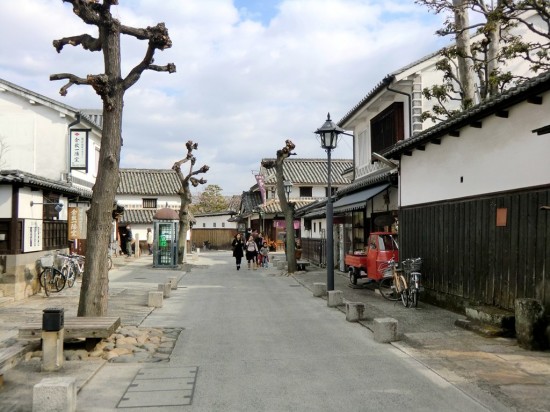 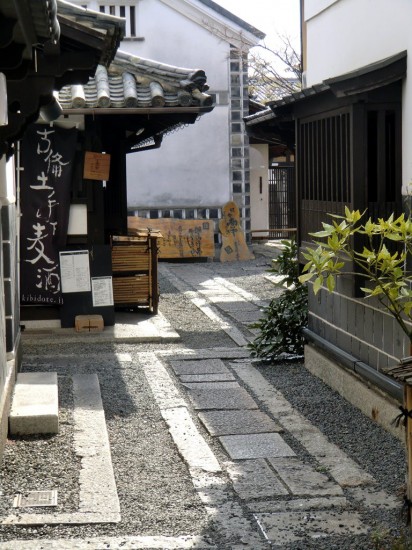 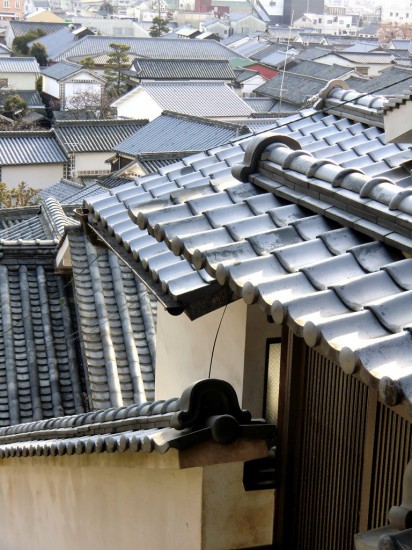 And as often when visiting a historical place, at least one temple is included in the visit, this time it’s called Achi-Jinja. 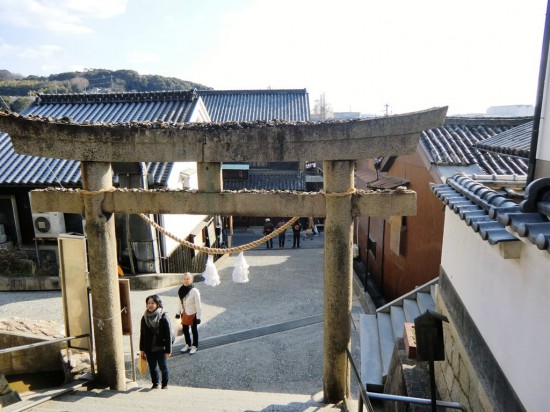 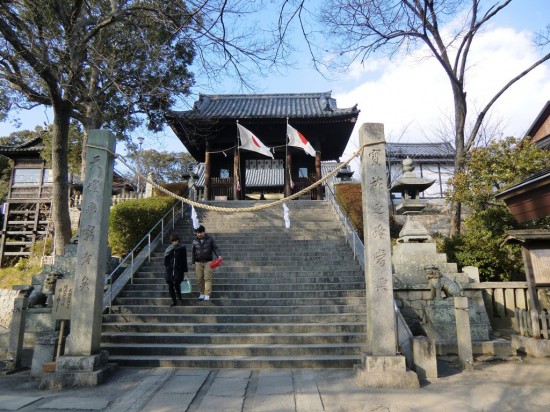 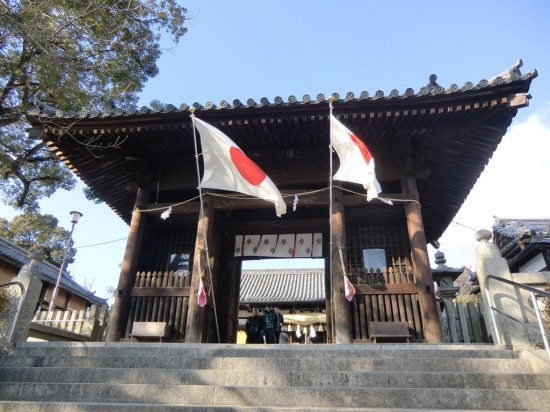 The presence of national flags on a temple surprised me at first, but it’s often the case on National Holidays, and it’s true that – in theory – Japan is not a secular country, although it is in practice much more secular than many countries that call themselves secular (but no politics on this blog). 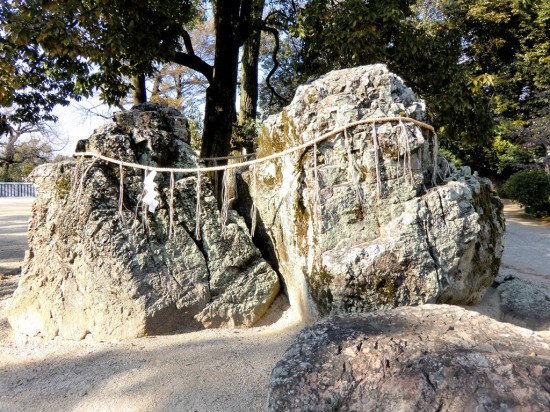 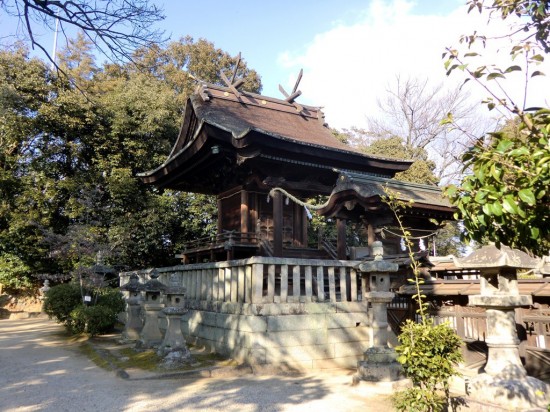 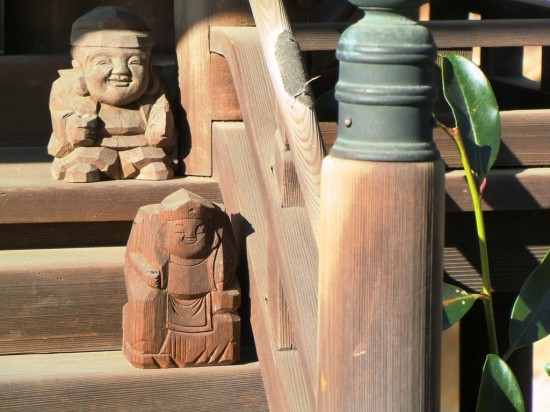 To conclude, while it’s true that Bikan is a beautiful neighborhood, I must admit that I was not completely amazed by it. I’m not sure if it’s because it was Winter (and the banks of the Kurashiki river looked a bit depressing with all of those leafless trees) or if it’s because it was a holiday and there were a bit too many tourists for my taste (this is something I will have to get used to in Japan, as me too will be able to travel on holidays only for a while). I need to return there on a week day and during another season to have a different – and better – look at it.

In the meantime, I really advise you to go visit this place if you get the chance.

10 thoughts on “Bikan in Kurashiki”