I don’t think I need to underline that they’re not exactly benevolent creatures, although it is some sort of protective symbol in Uwajima in the Ehime Prefecture. On the other hand, Uwajima is famous for bullfighting so there may be a connection. 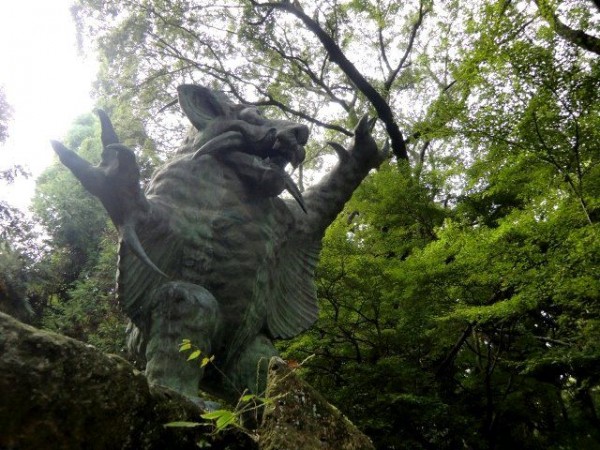 Let’s talk about the Ushi-Oni pictured above. This statue can be found at the entrance of Negoro-ji in Takamatsu, the 82nd temple of the Shikoku Pilgrimage. A temple I more than advise you to visit by the way.

The legend says that this monster used to terrorize the area about 400 years ago before being killed by an archer whose name was Yamada Kurando Takakiyo (a strange name – being in three parts and all – if you’re asking me, but I’ve had trouble finding information about him in languages I could understand). It is said that he has given the horns of the animal, as well as a drawing of it to the temple.

Writing this post, I found a blog that has an interesting theory of what really happened (I was personally intrigued by how such a legend can be only 400 years old). Basically, its author thinks it would have been an orang-outan. I have to say that I don’t find the idea to be far-fetched at all. After all, it is not unrealistic that such an animal could have ended up on Shikoku. And if that was the case, I can easily see how it could have “terrorized” the area and be mistaken for a mythical monster. What about the horns in the temple? Apparently, they are fossils.

In any case, don’t miss this Ushi-Oni statue when you go to Negoro-ji.