The summer session of the Setouchi Triennale 2016 is underway. And just like three years ago, there is a major event all summer long at the Takamatsu Sunport.

In 2013, it was Bengal Island, where during 44 days, artists and craftspeople from Bangladesh, along with various other artists from the Triennale showcased their arts, skills and culture. It really was one of the high point of the Triennale 2013.

All in all, it feels very different from Bengal Island. On the one hand, it wouldn’t be a good idea to always do the same thing. On the other hand, one of the things that I loved and that made me return to Bengal Island over and over again, were the large scale and/or long term projects that were taking place there and then; boat building, rickshaw paintings, installations that were created on site during the whole month and more.

This is not happening this year.

I’m planning to return quite regularly anyway, but in the meantime, here is my first glimpse of Thai Factory Market, where I went briefly on opening day after returning from Shodoshima. 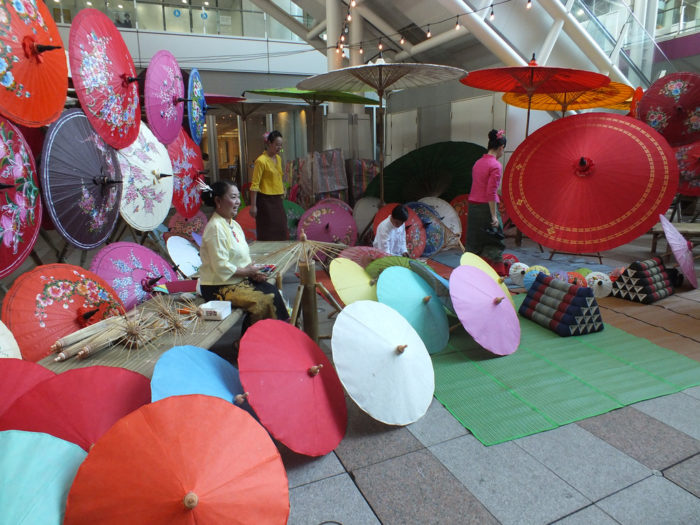 First big differences from Bengal Island (yes, it’ll be hard not to compare with Bengal Island for this first visit): location and scale.

While Bengal Island was mostly outdoors, on the Sunport Art Plaza (partly occupied this summer by Beyond the Border – the Ocean), Thai Factory Market is located almost indoors, in the open but covered space at the foot of Symbol Tower. While it doesn’t look as nice, the choice for this location is perfectly understandable; three years ago, everyone really suffered from the heat, not mentioning the occasional rain. This year, craftspeople and visitors alike are protected from both the sun and the rain, and it will certainly be much more agreeable for everyone. However, scale-wise, maybe because the location is smaller, the scale is too, and while Bengal Island really felt like a small village at times, Thai Factory Market, indeed, only feels like a small market.

In any case, lots of traditional Thai crafts are showcased, here is a small glimpse, waiting for more coming soon: 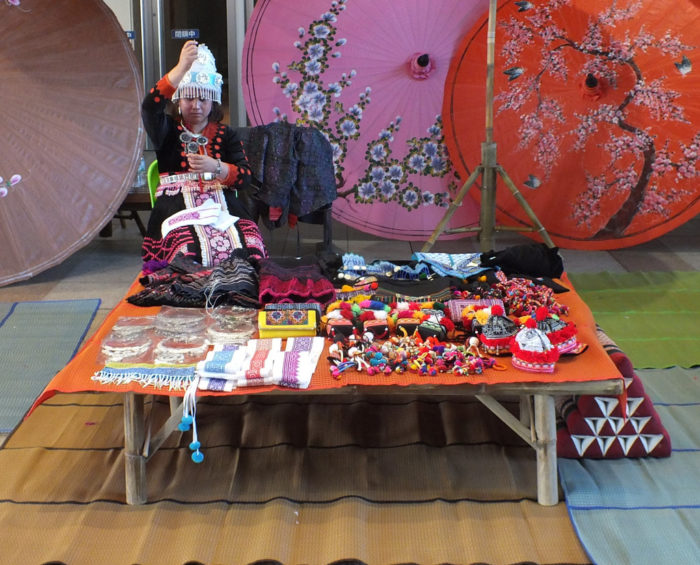 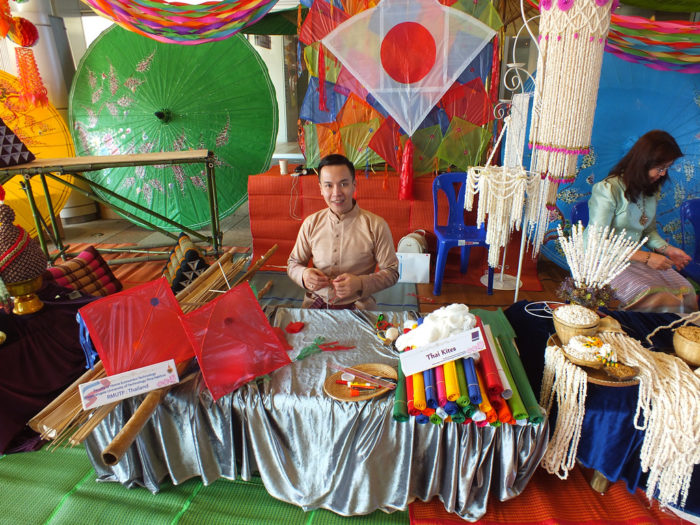 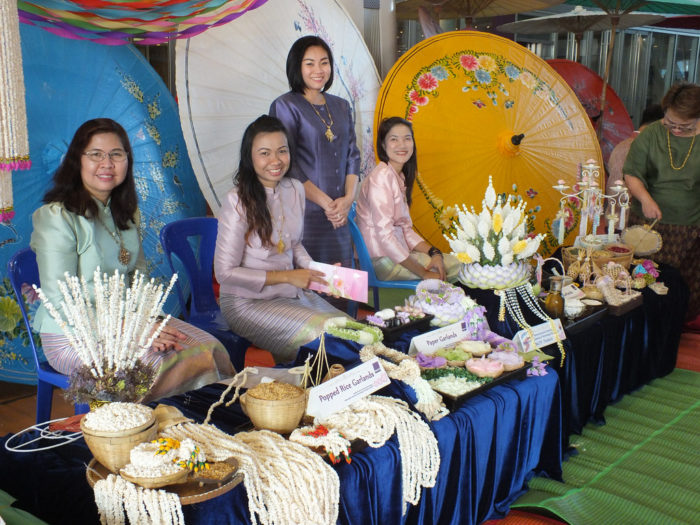 Fun fact: I was told that Thai people were world champions at smiling, and well… Let’s say that I was trying to take pictures of the people as they were working, but as soon as they caught a glimpse of my camera, they paused and… posed…

I guess that as days go by, they’ll get used to the attention more (it was opening day, remember?) and will stop pausing and posing for every person with a camera. There were also a few other factors: Hana was there and everyone found her so cute. The fact that I was a Westerner may have played a role too, as we also exchanged a few polite words. Their need to be able to communicate may be strong. Never underestimate the communicative isolation one feels when coming to Japan for the first time. Actually, it seems that most Thai people there can speak English, which will make things easier on the long run.  We’ll see… 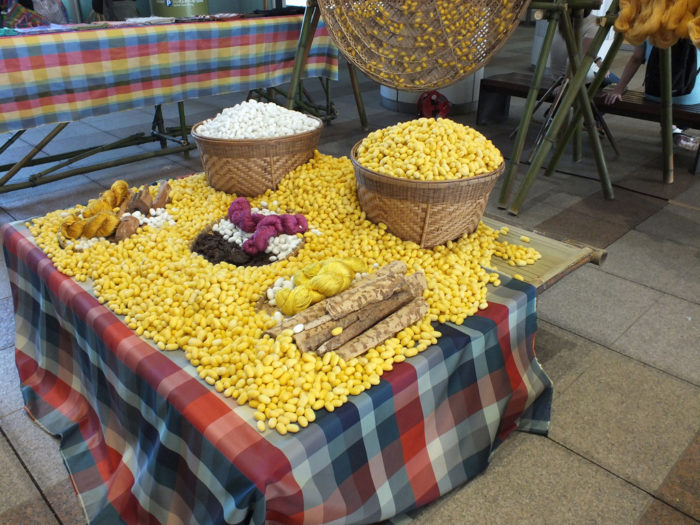 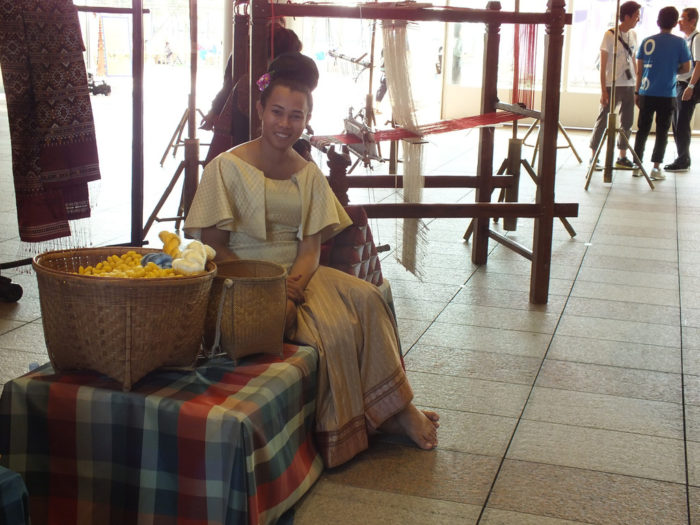 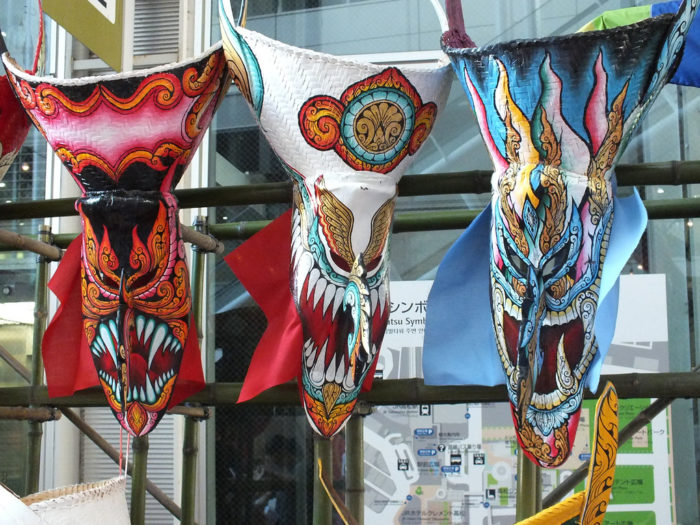 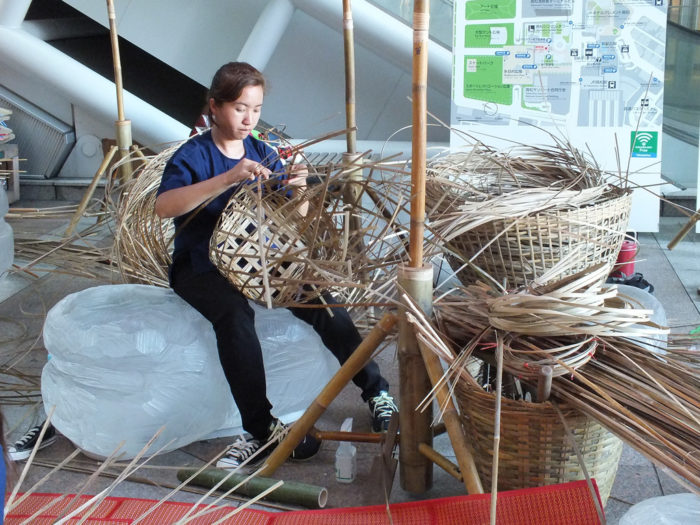 I had to be sneaky if I wanted to take pictures of people at work. 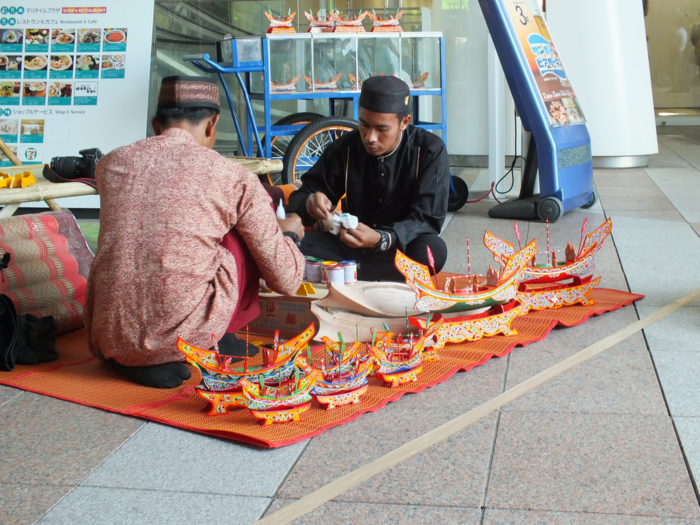 This man caught my camera one second too late; he started posing,
but I had already taken the picture I wanted. 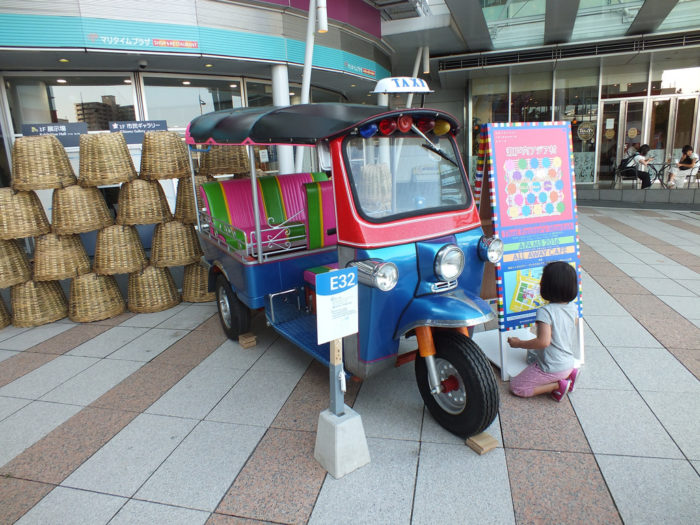 So, that’s all for this introduction of Thai Factory Market, more coming soon…

Oh, a small quiz. Someone you may already know if you’re a long time reader of the blog and/or a veteran of the Setouchi Triennale is present there. Can you guess who this is? Answer very soon, most likely in my next post on the topic. 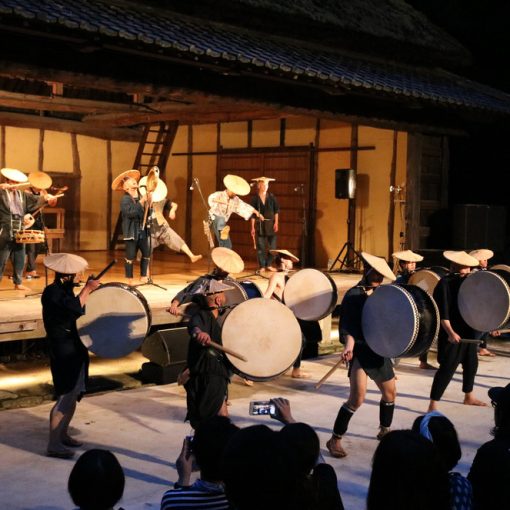 Now that the Setouchi Triennale 2019 is over, I paradoxically have more time to tell you about it and to show you […]

The road to Takamatsu from Kansai International Airport went through Osaka’s suburbs (mostly some ugly industrial and port areas), then Kobe. […] 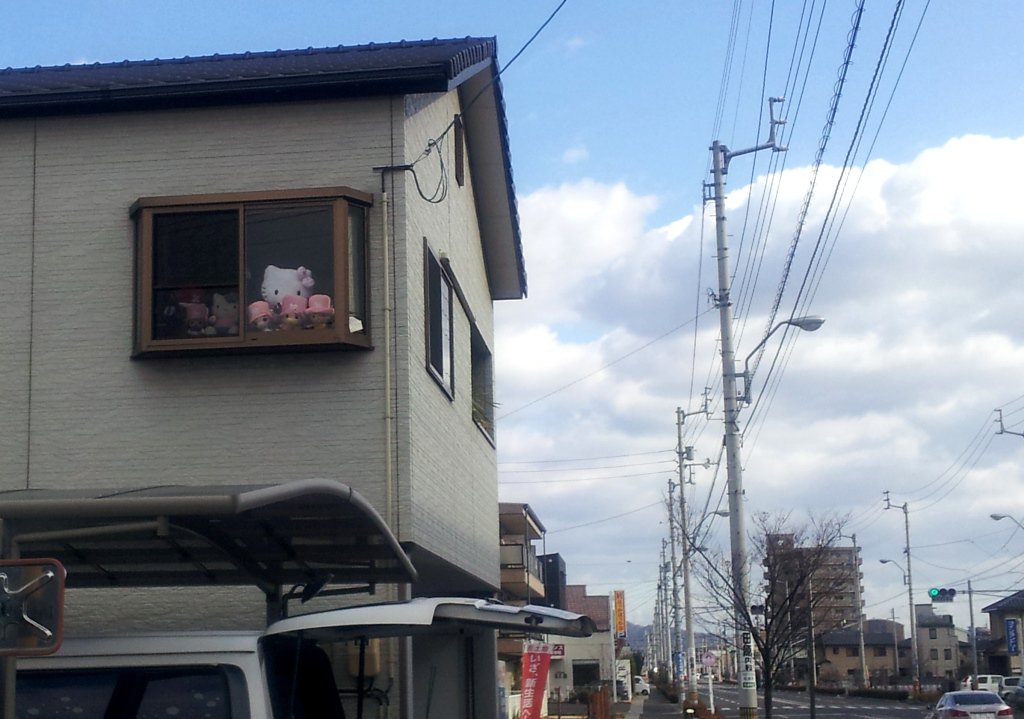 Here is what you may encounter when you go for a walk in my neighborhood: 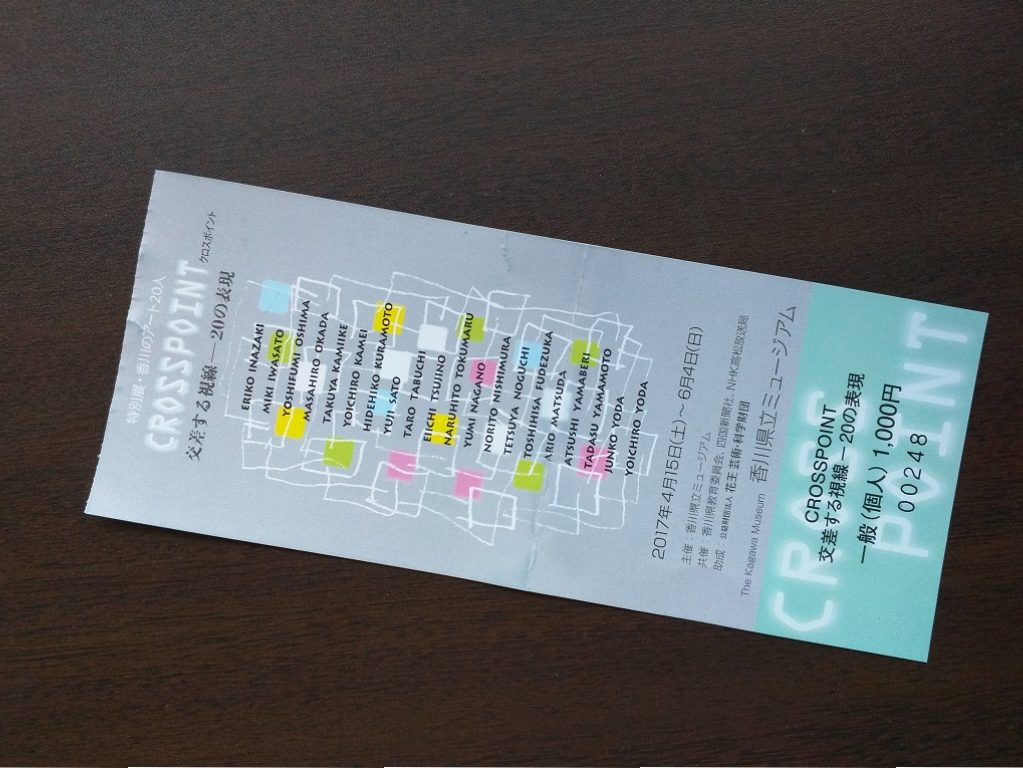 Crosspoint is an art exhibit that is currently taking place at the Kagawa Museum in Takamatsu. It started last week-end and […]

2 thoughts on “Thai Factory Market at the Setouchi Triennale 2016”