Last week, Douglas Brooks, who is currently in Kagawa, was invited to Shodoshima for something very special and fascinating. He invited my friend Cathy and I to tag along.

So we took the ferry to Kusakabe on this cold morning of late January, and from there headed to the village of Yasuda, to a soy sauce brewery named Yamaroku Shoyu.

Shodoshima, especially this part of the island, is renowned for its shoyu (soy sauce) breweries, as it has been a major producer of soy sauce for more than 400 years. With industrialization, soy sauce production became modernized in Japan, and one of the main changes was to shift from wooden barrel to stainless steel. Nowadays, less than 1% of soy sauce breweries in Japan still use wooden barrels (kioke – 木桶). Among them, a lot of Shodoshima soy sauce breweries (about 20 of them) still do. The rationale for keeping on using wooden barrels on top of perpetuating a centuries-old tradition is simply that the quality of soy sauce produced in such barrels is much better than the one produced in steel barrels. The reason is simple; in wooden barrels, enzymes and yeasts that are necessary to fermentation can thrive. Colonies of the microorganisms live in the wood for as long as the barrel exists, and they don’t need to be replaced for every production cycle like it’s the case with steel barrels. If you know a bit about fermentation (of beer, wine, sake, mirin, miso, or anything else really) you know what I mean. Fermentation is a chemical process that is alive, literally. The better the environment for the fermenting agents, dare I say “their ecosystem”, the better the finished product.

There is one major problem though. As the demand for wooden barrels has plummeted during the 20th Century, the production has plummeted with it, to the point that today, there is only one kioke master left in Japan, Takeshi Ueshiba of Fujii Kioke Factory in Sakai, Osaka. 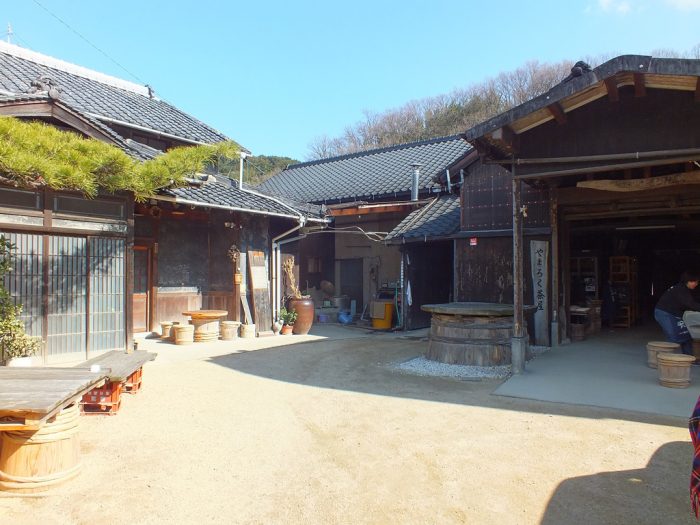 Enter Yasuo Yamamoto, 5th generation owner of Yamaroku Shoyu, who is not only set on keeping using wooden barrels but also who refuses to let the invaluable knowledge and skills of kioke making disappear. In 2012, with two carpenters, they decided to learn how to make kioke from Mr. Ueshiba. One year later, they made their own wooden barrel for the first time, and the following winter, in January 2014, they started a workshop to teach other people how to make kioke, so that the knowledge and the skills can, not only stay alive, but spread again.

So, since then, every January, a couple of dozens of young people from all over Japan come to spend a week on Shodoshima to learn how to make kioke.

And this is the reason why we ended up there on that cold morning of January 2017.

As I obviously don’t know much about the whole process, I’ll let you enjoy the pictures, with just a few comments here and there:

When we arrived, they had just finished the first barrel of the week, and they all were signing it: 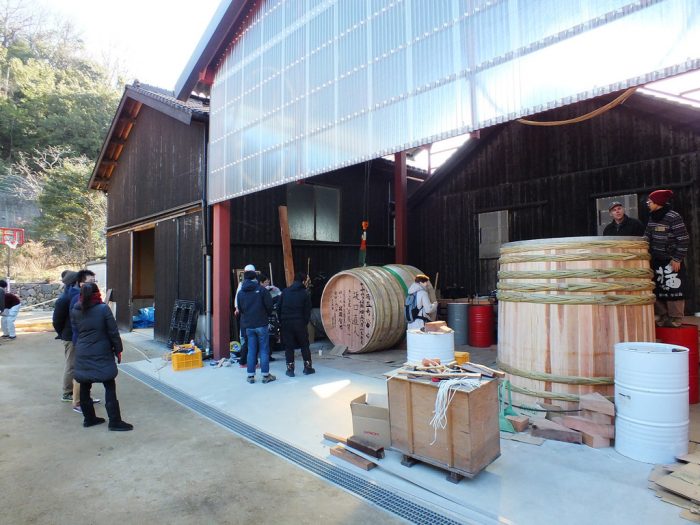 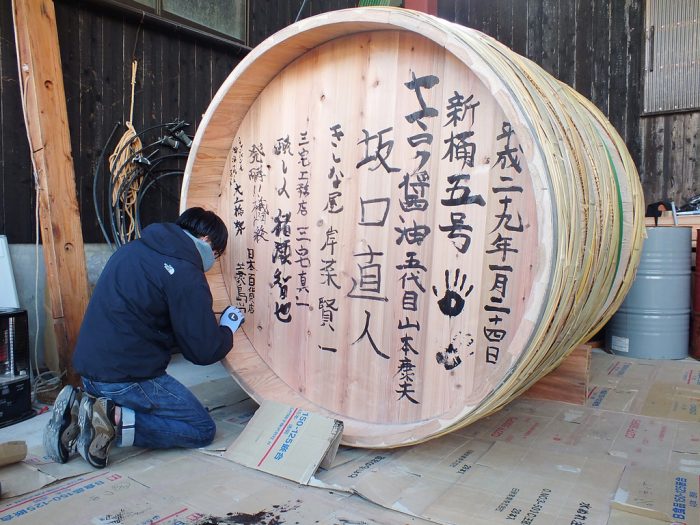 I was expecting only a handful of people, as you can see, this was not the case. The place was full of activity. There were all the students, a few locals, a local news TV crew, and even a couple of British filmmakers who were shooting a documentary about barrel making (not just soy sauce barrels) all over Japan. I wish I had their information, but I didn’t notice when they left and couldn’t ask them. If by any chance, you’re reading this, please, signal yourselves in the comments. 🙂

The hoops holding the barrels together are made of braided (local) bamboo. While the barrels themselves can last more than a century, those need to be replaced every decade or so. 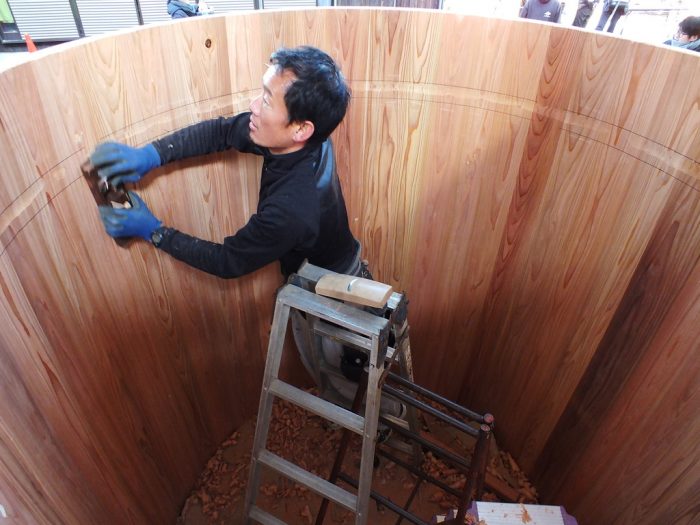 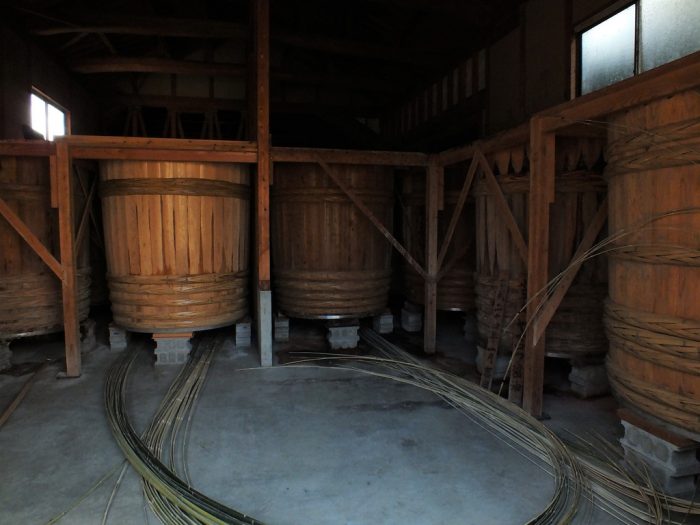 The barrels that were made the previous years. Of course, they are being used: 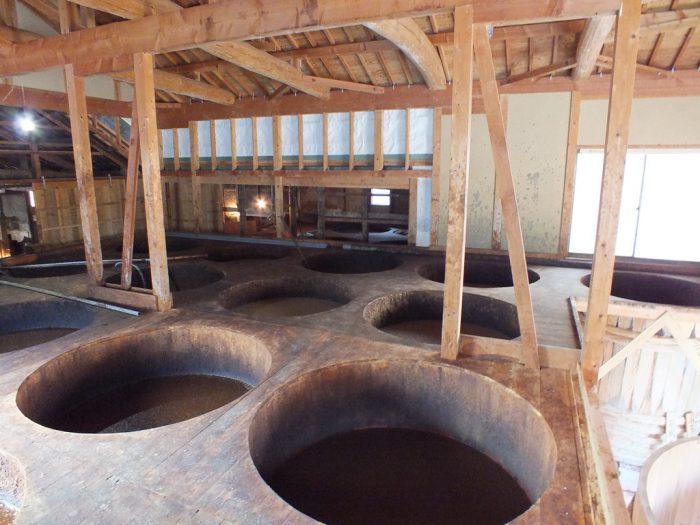 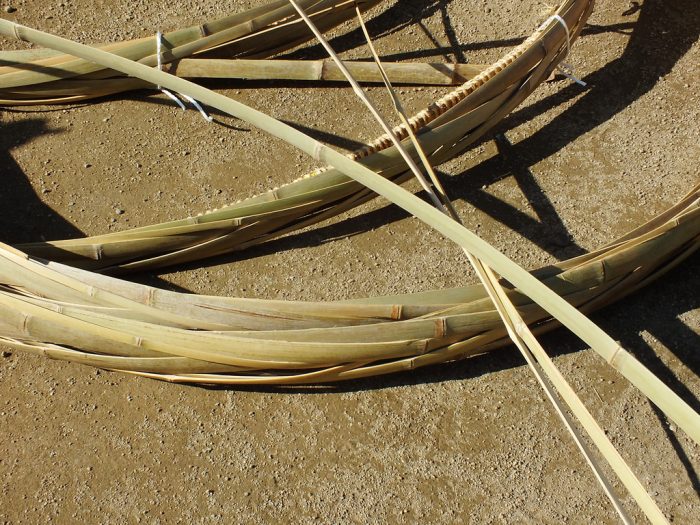 The pins needed to assemble the cedar planks into a barrel are made by hand:

Inside the bamboo hoop, there is some sort of “skeleton”, and this is how it’s made: 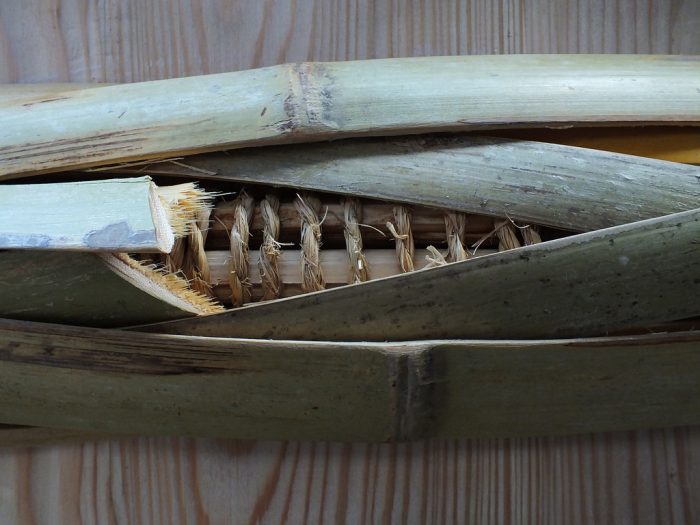 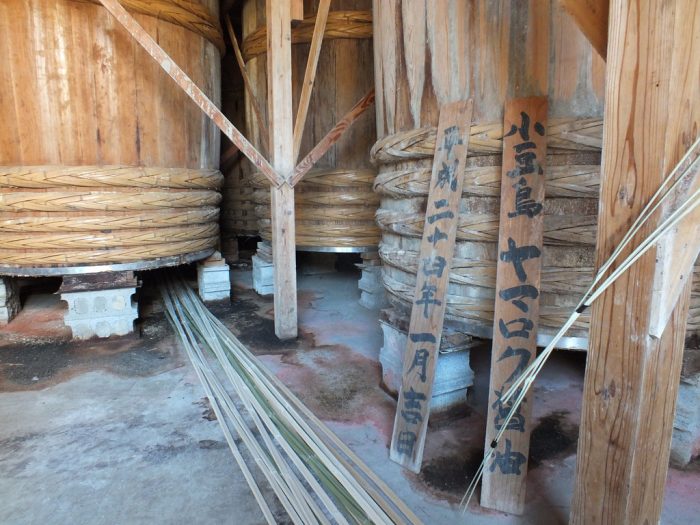 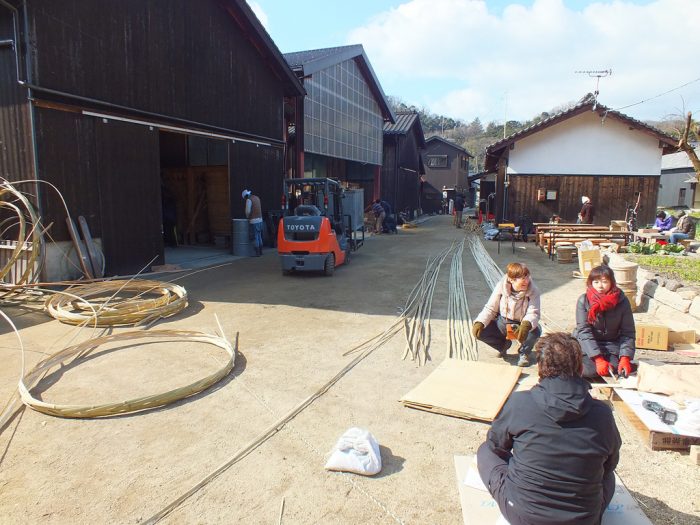 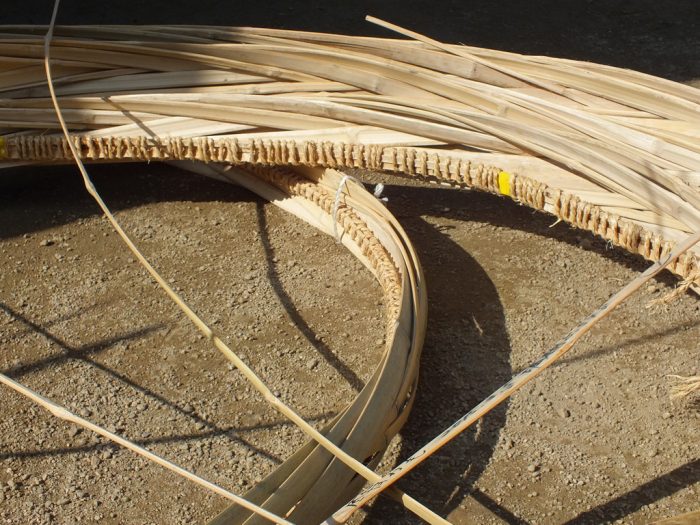 Next step, the newly finished barrel is filled with water to make sure it doesn’t leak: 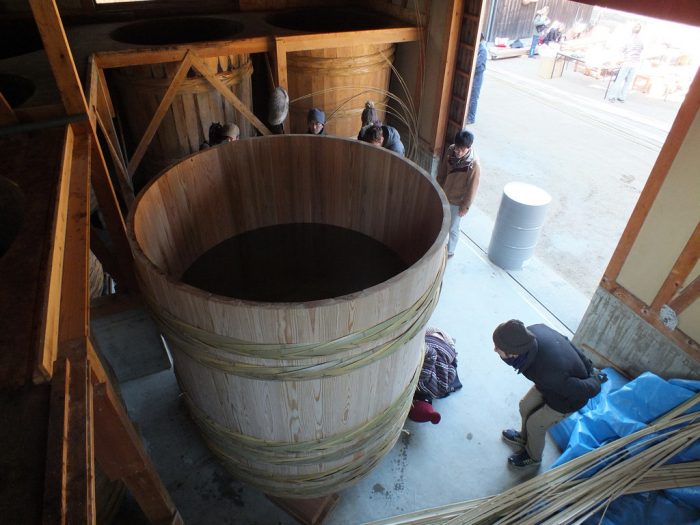 I got concerned when I actually saw some water on the floor under the barrel, but I was explained that this was not an issue. As the wood was going to soak up the water, it would actually become airtight (and water tight, obviously). A real leak was a different matter and looked different.

Meanwhile, the next kioke is slowing being put together:

Interesting to see that the sides of the planks are also signed by the crew. It reminded me somehow of James Jack’s Sunset House (also on Shodoshima) that also hides a lot of “secrets” in its walls, and more, as well as some shamanic rituals I had learned about a while ago (nothing to do with Japan, but I wonder if the source for those signing is not related to some ancient shinto traditions – I didn’t get to ask).

Also, notice the bamboo pins to attach the planks together. 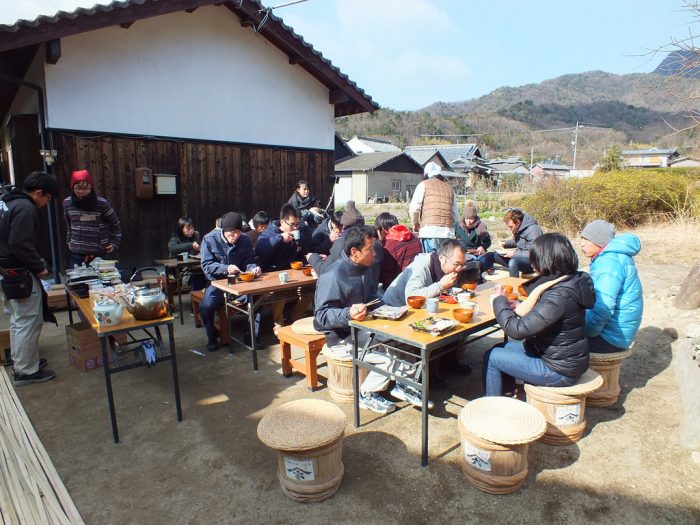 Lunch break.
While the bento were not homemade, the soup was, and it was delicious.
And thank you Yamamoto-san for feeding us, by the way. 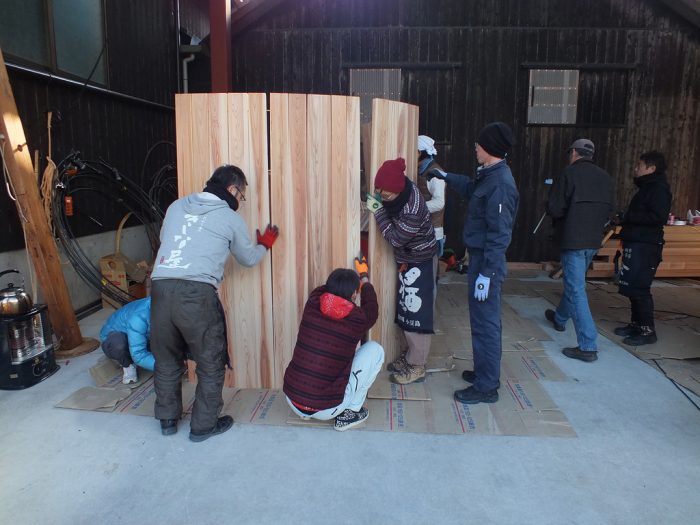 Back to the barrel. Notice how it’s held by metal hoops at first. It’s to make sure it’s perfectly set and shaped before adding the bamboo hoops. 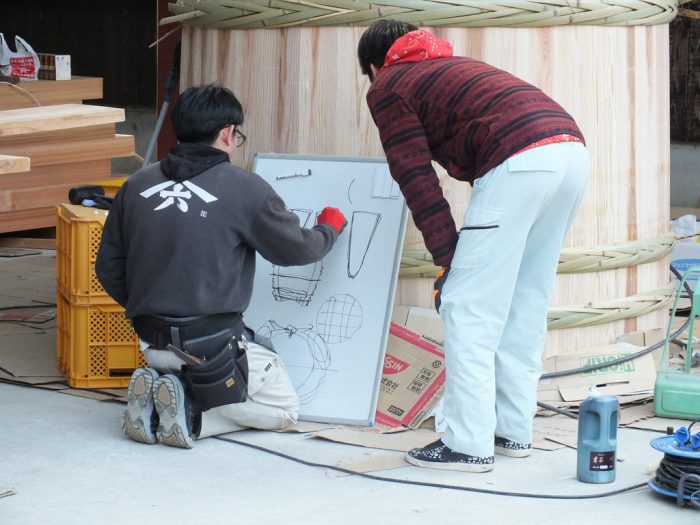 Yamamoto-san explaining a few things to a student.
(don’t worry, you’ll see more of him in a future post)

The other teacher was a carpenter from Tokushima, unfortunately, I didn’t get his name. Next, he is making a bamboo hoop under the attentive eye of a few students and of Douglas who compared it to the techniques he already knew from making Taraibune.

As we had to be back to Takamatsu a bit early that day, this is where we left our kioke makers, who still had a few days and a few barrels to go before being finished. I may pay them a visit next year too, we’ll see.

Let’s finish with a small video of some bits and pieces I shot on that day, and we’ll be back to Yamaroku very soon, as Mr. Yamamoto showed us around a little bit.