The Road to Takamatsu

The road to Takamatsu from Kansai International Airport went through Osaka’s suburbs (mostly some ugly industrial and port areas), then Kobe.

Seen from the highway, Kobe seemed a quite strange city to me. Its layout was surprising to say the least, as luxury and cheap apartment buildings, factories, office buildings, shopping malls and whatnot could be found next to each other with no specific logic whatsoever, as if those different buildings had been randomly put here and there.
I thought that the reason might have been that after the 1995 earthquake the city had been rebuilt as fast as possible so not much city planning and landscaping was involved in the rebuilding process. I also thought that it might not have anything to do with the earthquake. As you certainly know, a big mistake one makes when abroad is that when facing an unknown or strange thing, one tends to look for and find explanations that are always related to the few things known about the place in questions. For example, in Kobe, if something was mysterious, it must have been because of the earthquake, as it was the only thing I knew about Kobe (that and the fact that Haruki Murakami is from there). I try to avoid that pitfall as much as possible, but I’m not perfect.
(Indeed, I understood later that this apparently anarchic way of building cities had nothing to do with the earthquake and everything to do with the way cities are built in Japan)

We soon left Kobe and crossed the Akashi Kaikyō Bridge, and at the time I had no idea that this bridge was special. I must have been tired, I crossed it several times since, and it is very impressive, I’m not sure why I didn’t really pay attention to it at first. I guess I was more focused on whatever was “Japanese” to me, a bridge as big as it was is just a bridge.

On the other side was Awajishima, meaning – if I’m correct – the “island on the way to Awa.” Awa was the old name of Tokushima prefecture, from the time when Japan was divided in provinces. In other terms, Awajishima is the island on the road to Shikoku.
This island was my first glimpse of rural Japan, and all of its coastal villages were among the cutest villages I have ever seen. I don’t know if it was because it was the first time I saw traditional Japanese villages and houses, so calm and soothing in appearance, or if it was because I was exhausted (I don’t even know how long I had been up at this point), but I could see myself moving to one of those villages on the spot. Right after that thought was born in my mind, the following one was obviously to wonder whether I would have to become a fisherman if I actually moved to one of those villages.

It was also on Awajishima that I walked my first step in Japan (outside of the airport, I always consider airports as spaces in between countries, so they don’t really count). Nothing glamorous, the bus just made a five minutes restroom stop. I also entered my first Konbini. I must admit that after everything I had heard about them, I was underwhelmed, they were more or less the same thing as American convenience stores. I was expecting something more “exotic” for such an important Japanese cultural item. 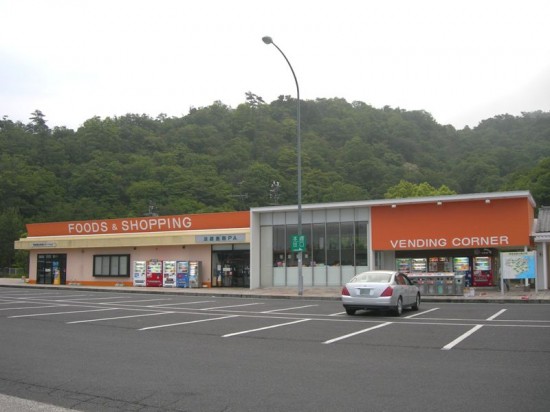 Konbini on the Kobe-Awaji-Naruto Expressway. If it's not the one I went to, it looks a lot like it (source:wikimedia)

After two hours on the bus, after crossing another giant bridge (more on that one later), we finally arrived to Shikoku. During that last hour of the trip, despite the fact that I was getting more and more sleepy, I couldn’t move my eyes away from the window. I had to see everything in the smallest details, as if I was not going to spend the next 10 days there. To my defense, it had been many years since the last time I went somewhere new.

My first thoughts about Shikoku were the following ones:

That last point reminded me of what every Japanese person must have said at least once in their life, possibly more, the fact that Japan is a small country with not much space. I always found that statement to be quite odd. After all, Japan is roughly as big as Germany, and although there are more Japanese people than German people, the difference is not so important that there’s a huge discrepancy in density of population. Wikipedia tells me 229/km2 – 593/sq mi for Germany and 337.1/km2 – 873.1/sq mi, a difference for sure, but not a huge one, England is actually more densely populated than Japan: 395/km2 – 1,023/sq mi.

It is looking at Shikoku’s countryside that I finally understood why Japanese people are convinced otherwise. If built and agrarian areas are competing for space so badly, it is because except for a few exceptions, hills and mountains are not populated nor built at all. They are almost entirely covered with forests. So, we’re left with a country where some parts (hills and mountains) are almost completely untouched by humans, and some other parts (plains) where every single square meter is used for something, where nature is completely gone except in the form of fields (if you consider fields as nature). So sure, in plains, a certain lack of space will be felt at times. However, outside big cities, it is a very relative thing. Takamatsu’s area is much larger than the area of any French city with a similar population (about half a million people). The difference is that you won’t find farmlands in the middle of the city in France.

Finally, we arrived at Takamatsu, right when the sun set, after having passed through dozens of cute villages that were so typically Japanese. My friend Miles, who’s American, but who has lived in Britain for a while now, always amuses me when he comes to visit me in France as he finds everything to be “so French.” And yes, several times during this trip I thought of him, because there was no other way to qualify so many things I encountered except as “so Japanese.”

Yet, if those villages seemed “so Japanese”, my first impression of Takamatsu is that it looked relatively “normal” to me. Certain parts of the city that the bus drove through (especially commercial areas and office buildings) even looked somewhat American to me, not Japanese at all, except for the fact that Roman letters were now almost nowhere to be seen.
(Note: Later, I learned that about 80% of Takamatsu was razed in 1945 by American bombings, on July 4th of all dates, so it may have also been rebuilt by those same Americans during the following years, hence the American feel to some parts of town)

There were English words here and there. According to 康代, it is so foreigners don’t get too confused, especially when they drive. However, most of the times, things that were translated into English were the ones that were pretty obvious to understand; for example, on the highway, the exits were signaled by a big useless “Exit” sign. Useless, because it was very obvious those were exits to anyone that has ever driven on a highway. On the other hand, more obscure things will stay obscure to you if you can’t read Kanji. More on that phenomenon in a later post.

I also noticed a few French signs, not road signs, but commercial signs, or should I say “French looking signs” as those were my first introduction to Franponais (the French equivalent to Engrish/Japglish if you want). I noticed a Café La Seine near the highway, as well as a Palourde Rouge near the train station. That latter sign made me laugh because of the sexual double-entendre it expressed and that certainly nobody got, neither the people in the streets walking daily in front of the building, nor its customers, maybe not even the owner of the business with that name.
For those of you who don’t speak French, it means “red clam”. Imagine what you want.
A few days later, as we walked by the building again and as I laughed again, I asked 康代 what this business actually was. She told me it was a soapland or some other sort of brothel. The joke was on me actually. The owner must have known all too well about the sexual innuendo that he was throwing in the streets for everyone to see. Well played.

We got off the bus in front of the train station.

We spent our first night in a hotel near the Sunport. After my first dinner in Takamatsu (I had Sanuki Udon, what else?) we had a nice walk on the pier, until the famous Red Lighthouse. Yes, my first view of the Seto Inland Sea was several shades of dark with lights here and there; boats and villages on the nearby islands (not totally true, I did see the sea during daytime on and around Awajishima). Talking about islands, in the darkness, I also could distinguish two big dark shapes in the water, one of them that would become quite important to me in the future (hint: it gave its name to this blog). 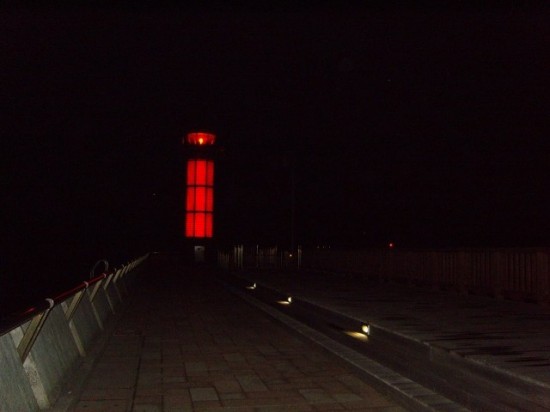 2 thoughts on “The Road to Takamatsu”