For this first post about my recent trip to Kyoto I’m going to tell you about one of the most famous neighborhoods in the city: Gion. Famous because, on top of being one of the traditional neighborhoods, it also is Kyoto’s main Hanamachi, if not Japan’s.

What is a Hanamachi, you may be asking? You could translate it by “flower town” except that the flowers are not (only) real flowers but geishas! Indeed, the neighborhood is the home of many ochaya – literally “tea house” – that are just that or rather traditional restaurants, where geishas work. Gion is not the only Hanamachi in Kyoto (more on that another day) but it’s the biggest, and the one where you have the most chances of seeing geishas.

Now, a few details about them.

First, there are a bunch of fantasies running around when one mentions the word “geisha.” Let’s tear them down right away. No, geishas are not some sort of luxury escort girls, even less prostitutes. It seems that this myth comes from a few things: some remains of 19th century orientalism, as well as the fact that at some point in the past (Meiji? after WW2?) some prostitutes used to dress up as geishas, and finally the fact that some westerners simply can’t distinguish a geisha from a woman wearing a kimono, plays a part in that confusion too.

A geisha is definitely not just a woman wearing a kimono. Actually, in Kyoto, the percentage of women wearing kimonos is much higher than in the rest of Japan, partly because Kyoto is a city that prides itself in its long history and tradition, and partly because many tourists like to wear kimonos when they visit Kyoto, even though they almost never wear one at home.

Also, in some neighborhoods – I especially think about Higashiyama here – you often see “geishas” just strolling around and posing for tourists with big smiles. Except that they are not geishas at all, they also are tourists who dress up as geishas for a few hours because it’s fun. A few companies propose that service in that part of town (here is the link to one of them to get an idea of what I mean). Keep in mind that geishas just don’t hang out in the streets and pose for people for no reason. When they’re out in the streets in “uniform”, they’re busy working.

Well, a geisha is first and foremost an artist. It’s a job, but it’s also a way of life. She must excel in several traditional arts (it’s actually the rough meaning of the word “geisha”): singing and dancing first come to mind, but playing one or several traditional music instruments, ikebana, theatre, and more are some of the arts a geisha should know too.

Finally, because we’re talking about Kyoto and Gion; an important lexical detail: the term “geisha” is a generic term applicable to all of Japan, but in Kyoto, one usually talks about Geiko, as well as Maiko (they are the apprentices).

Ok, now that you know (almost) everything, let’s start our visit.

First, may I advise you to follow the rest of this post with a map of Kyoto, it’ll be helpful. So, Gion is in the eastern part of town, between the Yasaka-jinja (the shrine to which Gion is affiliated) and the Kamo-gawa. I would divide Gion in three parts (note that the division is mine and is in no way official):

Our tour starts with Shirakawa canal and a nice surprise: 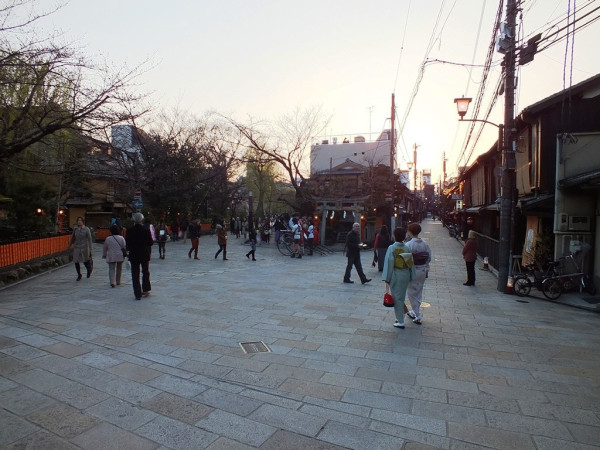 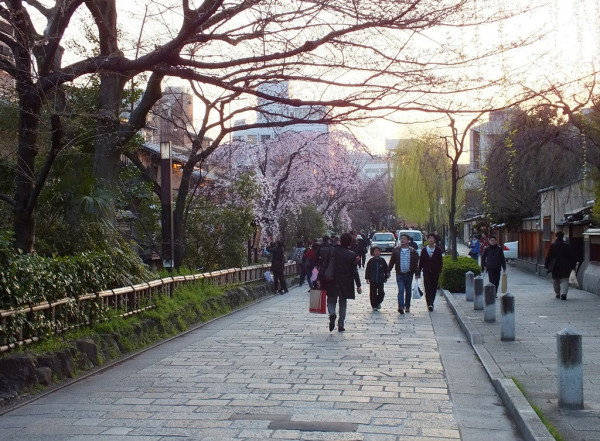 I mentioned it to you in the previous post as well as in my various posts and pictures on social media while I was there, but we were a bit early for cherry blossoms, almost all of them were only buds at the time. Except by the Shirakawa canal; a few cherry trees (no more than three or four) were in bloom and gave us an idea of how beautiful the spot must be right now as I’m typing these lines.

So here are my first cherry blossom pictures for 2014: 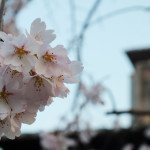 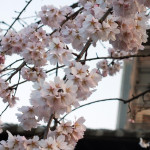 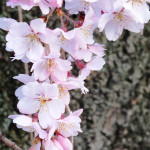 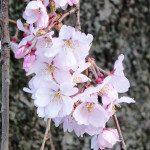 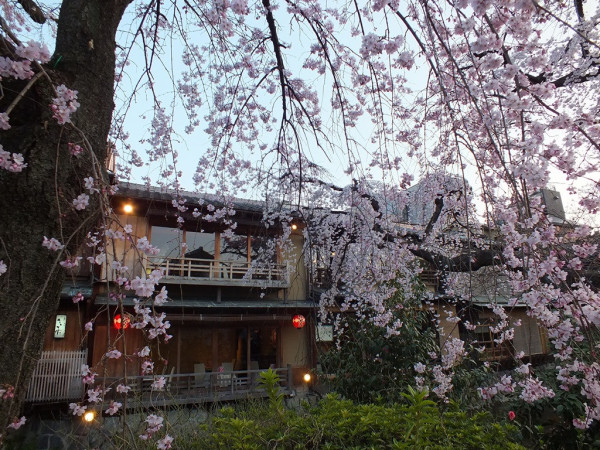 It really was a nice and pleasant spot. Don’t overlook it when you’re in Kyoto.

After a few minutes there, we headed towards the central part of Gion, the least beautiful one, the ones where tourists don’t go to. Well, that’s too bad for them, as this is what I saw as soon as I got there: 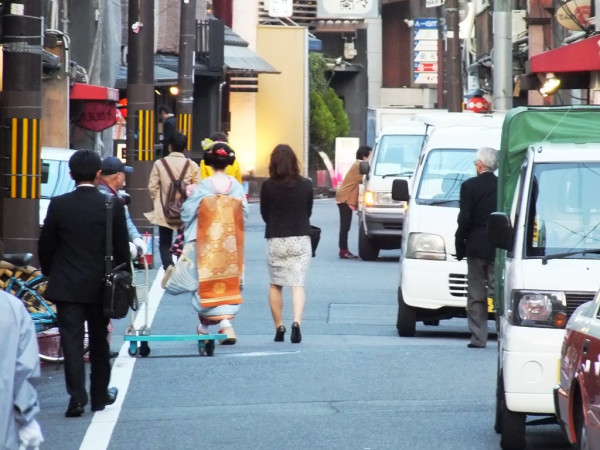 It was a bit strange to see a maiko walking with a woman wearing “normal” clothes. Not sure who she was (obviously not her “okasan” but maybe her real mother). I assume (but that’s really just an assumption from my part) that they were not heading to an ochaya but to Yasaka Hall, where the Maiko was going to play and her friend/family member was going to watch. On their way, they ran into a geiko, exchanged a few words and soon disappeared at the corner of the street.

I heard of people going to Gion a few times and never seeing any geisha. In a few minutes, I had already ran into two of them (and it was the same thing, the first time I visited, almost four years ago). Luck obviously plays a part, but just a part. 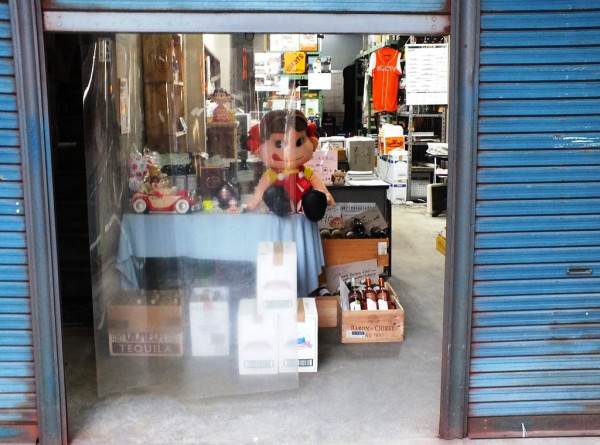 The back of a store in the neighborhood. 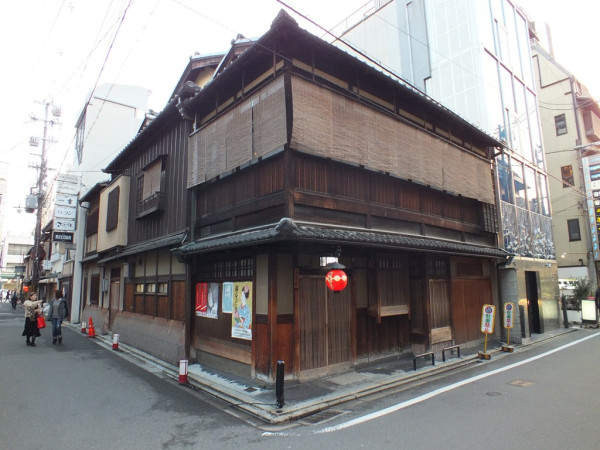 A small ochaya… or is it an okiya?

Next, we crossed Shijo-dori to reach the more famous and traditional part of Gion.

Entering Hanamikoji-dori (Gion’s main street) was a shock though. We were greated by a compact crowd of tourists, most of them stalking geishas who must have been quite numerous as it was late afternoon, more or less the time when they start going to their various appointments for the day. The crowd was especially imposing right at the beginning of the street as this is where Ichiriki-tei – one of the oldest and most famous ochaya – is located. That crowd reminded me of the busy days in Montmartre when I lived in Paris; the closer you got to Place du Tertre, the less you could walk freely. With one major difference though; in Montmartre, tourists just have a bit of a silly face because they’re excited to be in what they imagine being the traditional Paris (hint: it’s not really true).

In Gion, there was something else. The excitement was closer to what you may find near a red carpet before the Oscar ceremony or the Cannes film festival; some geishas had been spotted, the goal was now to track them, take a picture as soon as they’d leave the place, and if possible stalk them until their next appointment! I have very little respect for mass tourism, the one that just goes from famous place to famous place, trying to get to as many of them as possible in as little time as possible. You know what I mean; they get there, stay half an hour tops, take a few “iconic” picture of things they “have to” take (including more and more selfies apparently), and then move on to the next famous place, never even looking at the sideways, not mentioning trying to learn a thing or two about the local culture. And if you add to that some sort of “paparazzism” when geishas are involved, the whole thing gets borderline sickening. One sentence I overheard summed up the situation pretty well “How many did you get?”.

Those people are not visiting, definitely not discovering; they are hunting. As soon as I could walk through that crowd (having to literally push some people away to prevent them from stepping on Hana – at that moment, nothing else mattered to them but spotting a geisha for half a second when she gets out of the building – not even the safety of a toddler), my first reflex was to rush into the next side street, which – unsurprisingly – was completely empty. 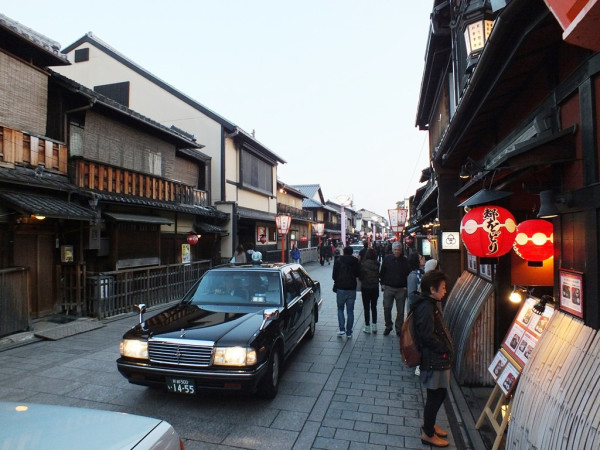 Hanamikoji-dori a bit further away, far from the crowd. Oh and by the way, this taxi reminds me to warn you about Kyoto’s biggest danger: its taxis. They go fast, all the time, even in small streets. They won’t slow down for you, they just won’t. I almost got hit a couple of times. 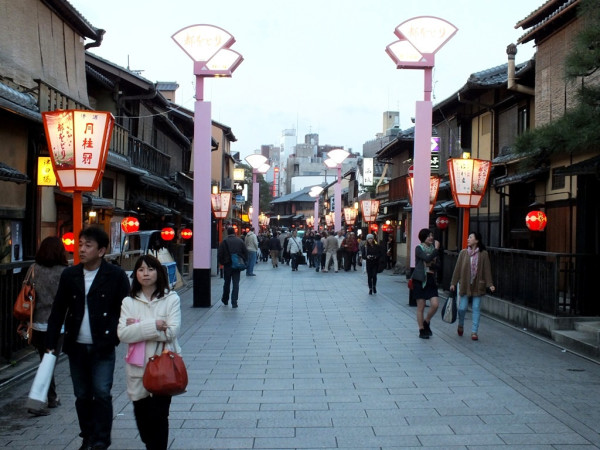 Still Hanamikoji-dori. I’ll let you guess why the crowd in the background.

But as I was saying a few lines above, you just need to walk to a side street to find the peaceful and wonderful Gion, almost completely devoid of tourists, just a few sane travelers and some locals. (maybe it is the good thing about mass tourism, when they all gather at the same spot, they leave large chunks of the place relatively unspoiled): 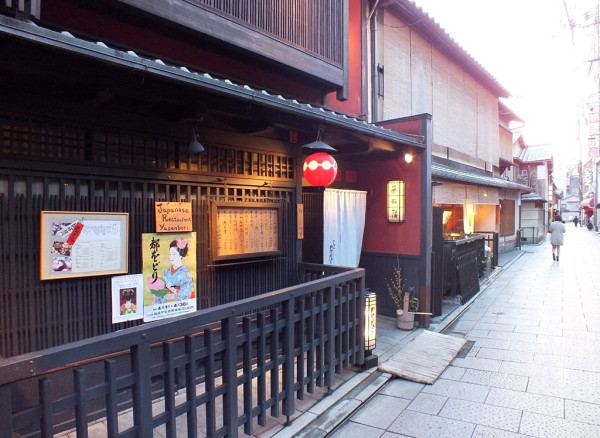 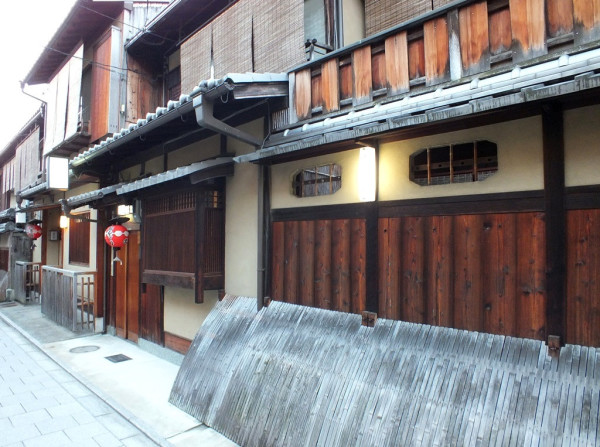 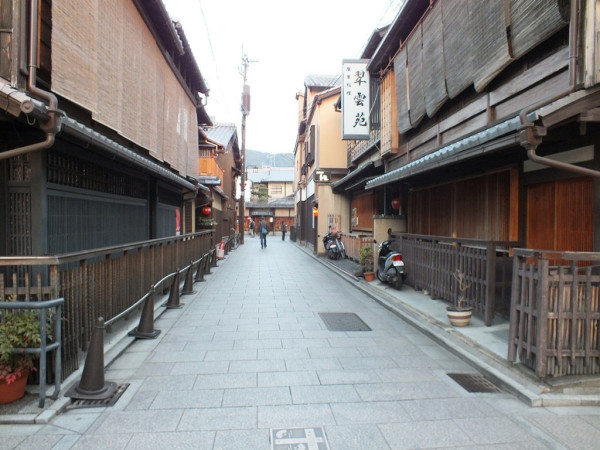 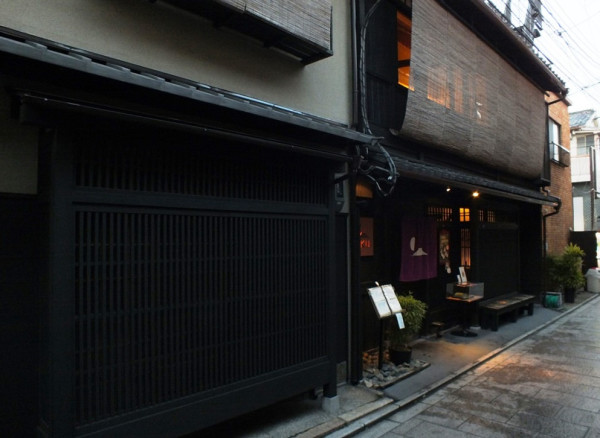 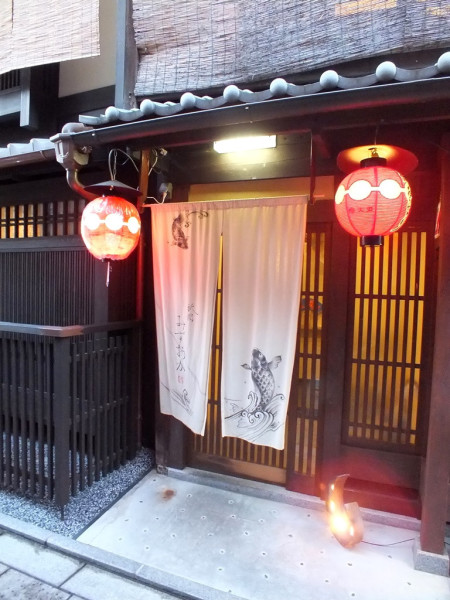 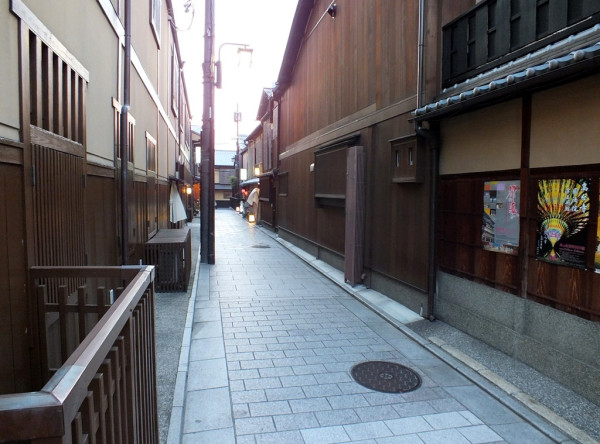 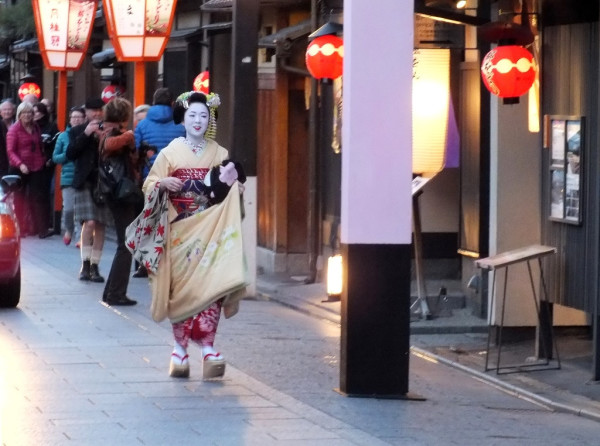 Two more “encounters” before leaving Gion. First this maiko who was late for Yasaka Hall, then, a geiko in “civilian” clothes with a friend who were arriving in the neighborhood. By “civilian” I mean that she wore a normal kimono and without white make-up. How do I know she was a geiko then? Well, first her kimono wasn’t that “normal”, it was obviously high quality and probably very expensive, not the kimono you usually see in the streets. Her hair and makeup were also very classy and refined in a very subtle way. Same thing with the way she walked, and the way she looked at me and Hana. Finally and most importantly, 康代 caught glimpses of her conversation and there was little to no doubt who she was.

This last encounter was very interesting. Sure, geiko and maiko are fascinating – at least to me – because they look so unreal, but this “civilian” geiko gave out a very different feeling. Her grace and elegance were even more captivating, maybe because more anchored in the real world; the absence of distinctive kimono and makeup bringing her back to the realm of everyday life? Call me pretentious or impudent, but differences in social status always leave me quite unphased (yes, that got me into trouble with hierarchy in the past), however, facing her, I really felt that I wasn’t her equal, that she was way above me. Still, when we looked at each other, she looked full of benevolence towards us – but Hana may be the one triggering that, she does that to people.

Finally, it was time to wave goodbye to Gion. We walked out through Kennin-ji that we didn’t visit, partly because it was under renovation, partly because the sun was about to set. 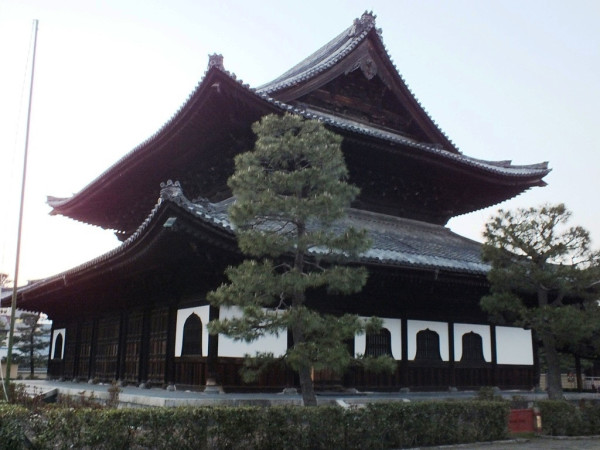