So, you remember a week ago, I went to Teshima, and particularly to Kō for a specific reason. Now is the time to tell about that reason.

Well, I went there to meet with Doug and Mike Starn so that they can introduce me to their work that is currently being built there, that is Big Bambú.

I have been in touch with them since last January when I started to contact some artists of the Setouchi Triennale 2013 in order to interview them. They were the very first ones to respond, almost instantly (and they gave me confidence that this silly idea of wanting to contact and interview artists from the Triennale when I’m not even a journalist and my blog is not exactly a big blog, maybe wasn’t such a silly idea after all). However, as their work wasn’t going to start until this summer, we postponed the interview for later.

Fast forward to last month when we got back in touch, exchanged a few e-mails and finally met last week.

As a result, here is a small presentation of the Starn brothers and of their project Big Bambú on Teshima, right before it opens to the public this Saturday.

Concerning their biography, let me invite you to read it on their site: Career Narrative.

It’s not their first time in Japan:

We have exhibited in Japan several times, first time in 1989 I think, with Akira Ikeda Gallery, also we have shown at the Art Tower Mito, and have major work in a few museum collections in Japan. I believe these are listed in the bio.

We first showed at Naoshima in 1993, it might have been the 2nd or 3rd show in the museum.

If the project Big Bambú sounds more or less familiar to you, it’s normal; it has had several iterations already: in their studio, at the New York Metropolitan Museum, at the Venice Biennale and in Rome.

And then it came to Teshima:

Last year we were asked to bring our Big Bambú project, at the suggestion of Sanaa and the curator Yuko Hasegawa to the organizers of the Triennale. We have not been to the Triennale before (…) and we are quite happy to be showing (in the area) again. 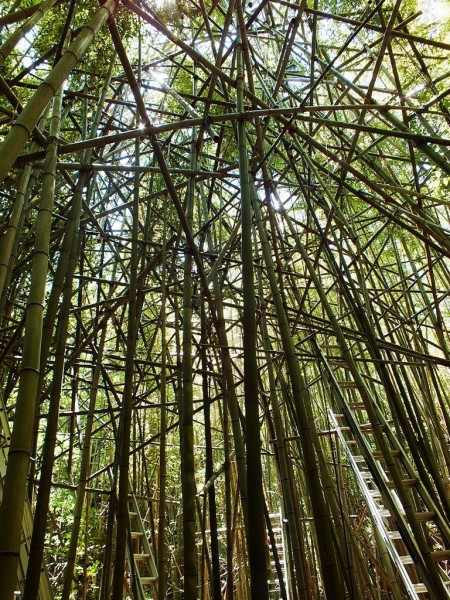 As far as describing what Big Bambú is going to be and look like on Teshima, let’s have Mike and Doug describe it to us a few weeks before starting building it:

We will be building our Big Bambú inside a living bamboo forest.

We will have a beautiful path through the forest and ultimately leading to a bambú walkway tied directly to the living stalks, rising from the ground- leading higher and higher until breaking the surface of the canopy of bamboo leaves, just your upper body will emerge, and the path will be facing towards the fanciful fishing boat made of bambú “floating” on the bamboo canopy, it will be as if you are swimming towards the boat, and then the visitor will be able to board the fishing boat and look out beyond the sea of bamboo leaves to the view over the Seto Inland Sea. 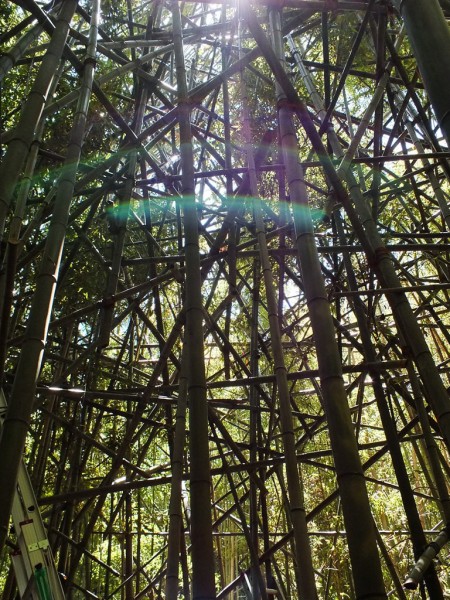 When I met them last week, they showed me the installation as it was being built. I didn’t climb to the boat as it wasn’t accessible yet if you’re not a climber, but it sits about 20 meters high in the bamboo canopy which is pretty impressive. I got to walk along the walkway until we were a few meters high (between 5 and 10) and it was pretty surreal amazing to be walking like that, above ground, among the bamboos. Strangely, even though I tend to have a fear of heights, no such feeling up there. I guess being surrounded by bamboo doesn’t give the impression that we’re high above ground. That and the fact that I’ve always found bamboo to have a soothing effect on me.

As I met the Starn brothers and their crew during lunch break, I didn’t get to see them at work. I’m not sure that would have been a good idea anyway. From the ground there isn’t much to see and if I had been up there with them, I would have been in the way.

However, Mike and Doug Starn sent me a few pictures that they took during the past month to share with you (you also can find a number of them on the Big Bambú Facebook page) and they illustrate the work being done much better than I could ever do.

I can’t wait to see and experience Big Bambú on Teshima being completed. I’ll have to return to Teshima as soon as possible (some rumors are saying this Sunday, but I’m not sure if they’re reliable).

In any case, a great thank you to Mike and Doug for their kindness and generosity.

Also, a special shout out to the crew who were also very friendly and welcoming. I wish I would have had more time to get to know everyone better (but you know, they had work to do, and we had a bus to try to catch). So thank you to all: Doug Starn, Mike Starn, Liz Elliott, Steve Brown, Zac Hansen, John Mackey, Colleen O’Brien, Gaby O’Shea, Sarah Shaw, Mark Stephens, Dave Vegeto, Achi Sato, Hiro Koizumi, Hiromi Katsuno, Masa Mii, Aki Suzuki.

Big Bambú is the Setouchi Triennale’s work number 30. It is located right before entering the village of Kō on Teshima when coming from Ieura.

Opening July 20th, it’ll be open every day, 9.00am to 4.30pm during both the Spring and Summer session of the Triennale.

Please note that access will be limited to about 8 persons at a time to be able to enjoy the work properly and safely, so expect some waiting time on busy days.

Note about the pictures: the big pictures are mine and are under Creative Commons Licence as usual (see at the bottom of the side bar on the right). The pictures in the galleries (as well as the two right before and after the third gallery) were kindly provided by Doug and Mike Starn, and as such their property, not mine.

Edit (March 2014): please note that you can read about the finished installation there.