Today, the artist I’m interviewing is Arthur Huang, whom I’ve “met” online a few months ago (before we go any further with this post, I must mention his blog where he details the whole process and evolution of his project for the Setouchi Triennale) and who share the same love for Ogijima as I have. 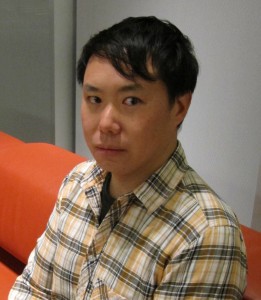 1. Can you tell us a little bit about yourself?

I am an artist and scientist from the United States. My studio projects usually focus on some aspect of my day to day life such as diet, spending, commuting, and other activities. I also like to work with collections that I generate from my everyday life such as receipts, packaging, junk mail, and other ephemera. From there, I draw on a variety of mediums including drawing, digital photography, collage, printmaking and installation to create my works. My work as a molecular biologist over the last fifteen years has also played a role in my studio practice as I often utilize scientific methodologies as a starting point for various projects.

2. How did you hear about the Setouchi Triennale? I know you attended the 2010 edition, can you tell us in a few words your impressions back then?

I had first heard about Naoshima, the Chichu Museum, and Benesse House from a friend shortly after arriving in Japan. I also remember reading an article about Naoshima in the New York Times about the same time. When I finally decided to visit Naoshima, it turned out to be during the first Setouchi Triennale. As a result, I made plans for a five day visit towards the end of the festival.
The experience was nothing short of spectacular! I visited Naoshima, Teshima, Ogijima, Megijima, Shōdoshima, Takamatsu, and Uno. Each island and port had its own unique qualities that made individually stand out in my memories. For me, what was particular refreshing about the Setouchi Triennale was the fact that the artworks in the festival felt connected to their locations. I think that is something that I had not really seen in contemporary art on such a large and expansive scale, especially outdoor art festivals. The more time I spend in Japan, the more I realize that this connection between art and place is very much part of the Japanese aesthetic.

For its landscape, its people and its art, Ogijima is by far my favorite island in the Seto Inland Sea. I would even say that it is my favorite place in all of Japan. I saw the open call for project proposals on the island of Ogijima, in particular, projects for the narrow alleys between the Ogijima buildings around the main port early in 2012.
I knew that I had to apply, but I was not sure what I wanted to do. So in the spring of 2012, I went back to Ogijima to spend more time on the island and see what my experience there would inspire in me. I came back from that weekend trip with several project ideas and ultimately submitted two proposals for consideration. The proposals I submitted were made in response to my experience on Ogijima and thus a different approach to making work for me.
I was thrilled and honored to learn that Setouchi Triennale committee had chosen the Houses for Light project as one of the open call projects they wanted to move forward with. I came up with this project while keeping in mind the desire for the artwork to connect with the place it is located. So with this project, I have a fantastic opportunity to push and expand my boundaries as an artist.

4. Did you get to choose the location where your artwork will be shown? If yes, what guided your choice?

As I specifically created my proposal for Ogijima, I was hoping for the project to be sited on Ogijima and that was the case. During my research trip to Ogijima, I had found several possible locations for the Houses for Light sculpture. For my project proposal, I decided on a location that provided a view of Ogijima port.

After my project was accepted, I visited Ogijima in November 2012 with members of the Setouchi Triennale staff to start working out the details for the project. During that site visit, we walked around the island and decided that we place them at various locations en route to the Ogijima lighthouse. With the help and support of the Setouchi Triennale, I will be making three Houses for Light sculptures to guide visitors from the Ogijima buildings to the Ogijima lighthouse.

5. What can you tell us about your upcoming work for the Triennale?

The Houses for Light project is my ode to the island of Ogijima. The sculpture incorporates the two most memorable features of the island for me – the colorful Ogijima buildings and the Ogijima lighthouse. I can still remember pulling into Ogijima port during the Setouchi Triennale 2010 and seeing the colorful arrangement of old buildings climbing their way up the face of the island. Every time since that first visit, I stand out on the deck of the ferry coming and leaving port and take photographs and video of all of buildings.

With Houses for Light, I want to draw people’s attention to the Ogijima lighthouse and share my fondest memories of this island. The base of the sculpture is the Ogijima lighthouse, but I have replaced the light with a stack of Ogijima buildings climbing up the island. The Houses for Light sculpture symbolizes the collection of my Ogijima memories from the past and ones to be made in the future. For me, the stack of Ogijima buildings as seen from the sea is the light that leads to Ogijima.

Thank you Arthur for these very detailed answers.

If you want to know more about Arthur Huang, he’s quite active on the web, first with his blog Life as a Consumer that I previously mentioned. You can also follow him on Twitter and Google+.

2 thoughts on “Arthur Huang on Ogijima”