As you may already know if you’ve been to Japan (or if you read blogs about Japan, the topic being very common) pretty much every city in the country has personalized manhole covers, usually representing a famous element of that city.

Let’s take a look at manhole covers in Takamatsu: 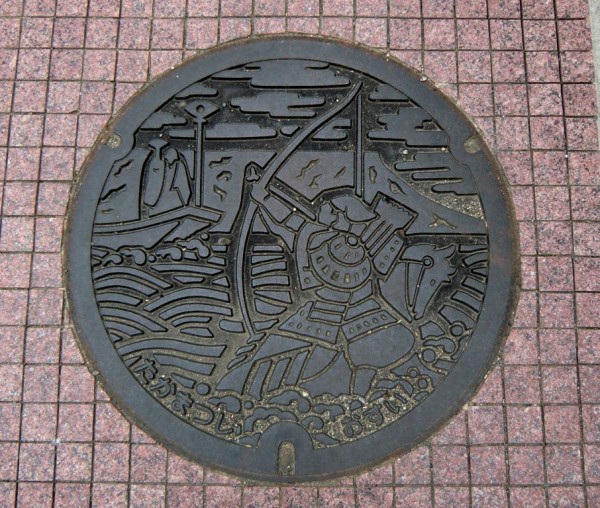 They represent a famous episode of the very famous Battle of Yashima that took place in 1185 on Yashima and in the vicinity (i.e. in Takamatsu).

Actually I think the occasion is perfect to tell you a little bit about this battle.

So, between 1180 and 1185, the Genpei War opposed the Taira clan to the Minamoto clan, with no less than the control over Japan being at stake. It originates in various conflicts and tensions concerning the imperial succession, as Emperor Antoku was only one year old when he was crowned, and a lot of people wanted his power.

One can summarize the Battle of Yashima as follow:

In 1185, the war has already been pretty fierce for about five years. The Taira clan (the loyalist faction of Emperor Antoku, who is six years old at the time) just fleed Kobe where the capital had been set up after having been chased from Kyōto. The clan had found refuge on Yashima, which was an actual island at the time (well it still technically is as it’s surrounded by a saltwater canal) although it was accessible by foot at low tide. A more or less temporary palace had even been built. From its configuration (a high plateau surrounded by steep slopes and cliffs in the south and the sea in the north), Yashima was pretty difficult to attack and relatively easy to defend.

The Minamoto clan who was chasing them managed to reach Shikoku, but a severe storm had almost destroyed their fleet and only about a hundred samurais were getting ready to attack the Taira clan that, even weakened, could defend itself against such a small army. However, unaware that the Minamoto were already on Shikoku and that their fleet had been badly damaged, the Taira were expecting an attack coming from the sea.

So, the Taira clan faced a major surprise when in the night of March 21st, 1185, they saw dozens if not hundreds of bonfires being lit just south of Yashima. They believed that a large army arrived from the south and that it would not only prevent them from retreating inland if necessary but also block their supply routes. The Minamoto had managed to accomplish such a deception thanks to sympathizers among the local population who helped them light those bonfires and pretend to be part of the army. Thinking they were about to be besieged (remember they still think the Minamoto fleet is about to arrive at anytime), the Taira clan decided to leave Yashima as soon as possible and to make sure this happened, the Minamoto samurais started their assault at dawn.

The Taira clan managed to escape to Dan no Ura (today’s Shimonoseki) where it was definitely defeated one month later.

And what about the drawing on the manhole cover?

It represents Nasu no Yoichi, a Minamoto samurai who chased a Taira ship well into the sea with his horse. The people on the boat taunted him with a fan attached to a pole (that fan being both a rallying sign and an invincibility symbol). He then took his bow and in a single shot, on his horse basically swimming in the sea, he hit the fan that fell into the water before the ship can flee in the distance. That act ridiculed the Taira even more as if their defeat was not enough.

A few days later, the people from one of the small islands near Yashima found the fan that had washed ashore on their beach. And as time passed and the story of Nasu no Yoichi became more and more famous, the island was started to be called the “fan’s island” or in Japanese: Ohgijima…

(and while the kanji used to name this island have changed with time, the pronunciation barely has)

4 thoughts on “Manhole Covers in Takamatsu”