When you can’t go to Ogijima, sometimes, Ogijima can come to you, or at least parts of it.

On Tuesday, I received not one but two packages from Ogijima!

They came from the two online shops based on the island.

In the morning, came the herbal teas (and a few vegetal presents) from Zo to Taiyo / Elephant Sun, the café/herb shop/beauty salon/farm, and more that owned and managed by the Yamaguchi family. They grow, make and sell all sorts of very natural products, most of them edible or drinkable, but not only (as it’s also a beauty salon).

Here are the links you need to follow if you want to know more (they may even be able to send some of their products overseas if you’re interested, although I’m not too sure):

In the afternoon came, Damonte & Co‘s package, that was mostly bread, including Damonte’s renowned Pain de Campagne (Country-style French bread) that is as good as the one you can find in France, even better than some places, along with some delicious homemade raisin granola, and also a few vegetable presents. 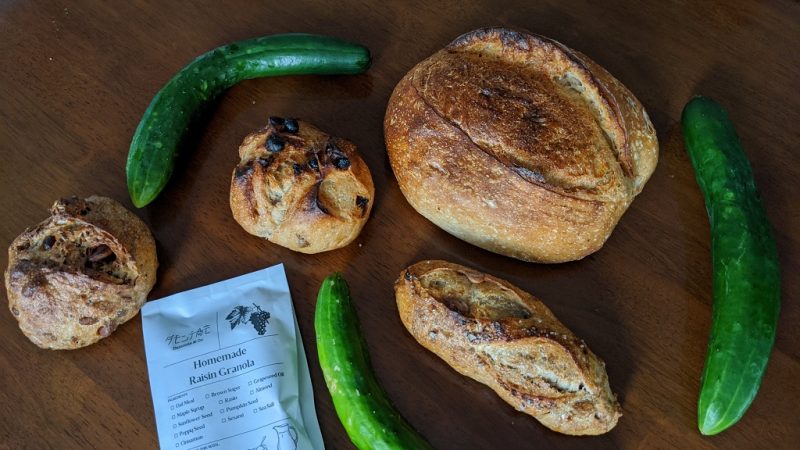 And every time, it’s the same, every time, I want to eat it little by little, to make it last and… well, the last slice of bread was eaten Wednesday night (it lasted more than 24 hours this time… barely)

You can also follow Damonte & Co online in various places:

Thank you so much to the Damontes and the Yamaguchis for such amazing products and the love that transpires in every bite and every sip.

As you probably know, I love Ogijima for many reasons, but these two shops and these two families and what they represent symbolize what I love about the island the best.

Sure, the island and its village are beautiful and have always been. Sure, the art brought by the Setouchi Triennale made it even more wonderful, but the keyword here is revitalization.

As you may know, the small islands of Japan are dying. They’re some areas of the country that are hit the hardest by depopulation. Many people and local governments have many ideas to revitalize these areas. Unfortunately, some other local governments don’t even seem to care if their islands are dying. Luckily, our local governments care a lot and have been trying different things. Tourism is often the answer, or at least that is what some people think. And while tourism is part of the answer, especially in Kagawa Prefecture, it can’t be the only answer.

First, when tourism becomes too massive, it also becomes destructive and counter-productive – the good it brings is often outweighed by the bad it also brings. Also, in this day and age of the pandemic where international tourism has been put at a stop and domestic tourism is really unwise, it shows more than ever that you can’t build a sound revitalization solely based on something as unstable as tourism.

When some local islands decided to rely too much on tourism, Ogijima decided early on to take a different path. Sure, there is a tourism component, but it’s minor and the island’s economy is not relying on it much, if at all.

Instead, it has based its revitalization on two components: “new” technologies – especially IT – as well as using the island’s resources in a sustainable way, including natural farming.

Both Damonte & Co and Elephant Sun represent this perfectly. Almost all of the products and ingredients that they use are grown on the island, in a sustainable and organic fashion. While they have shops and cafés on the island, a non-negligible part of their income is generated by online shops. And while both families have a wide array of skills, none are computer experts. However, both have awesome and professionally made websites and online shops that can rival with some much larger companies with much bigger budgets. How is that possible? Because not one, but three families in the island work in IT, locally.

So, to summarize, we have a local sustainable economy that is respectful of people and nature alike. Current technologies help running both businesses. Those can function even when access to the island is limited by a pandemic, and people anywhere in Japan can still have access to the wonderful natural produce from the island.

This, dear readers, is revitalization done right and an example to follow.

And I’ll even go further. In these troubled times when everything is uncertain and unstable, they could be an example to follow, not only to revitalize rural areas properly but to restructure at least part of society.

Hoping that it will inspire more people to follow similar paths.

Thank you for reading.

If you made it this far, you may want to support my work.

2 thoughts on “When you can’t go to Ogijima…”