On May 17th 2011, two years ago today, I left France to travel to Japan for the first time, a trip that would have a great influence on me as you already know (if it hadn’t this blog wouldn’t exist in the first place).

I originally wrote it (in French) after returning from the trip. Here is a translation that I more or less updated, I’ll try to do it as little as possible for the upcoming posts to transcribe here my feelings during that first trip to Japan.

It was the day I was going to go to Japan for the first time in my life.
As it is normal procedure when on lives in Paris, a trip overseas always starts in Charles-de-Gaulle airport, and strangely it was the first time of my life I was starting a trip from there. It was not my first time in Charles-de-Gaulle, mind you, but before that day, I either transited there (usually between the US and Toulouse) or just went there to either welcome or accompany somebody that was traveling and not me.
I must admit that while sitting on the Roissybus, I got a little bit excited when we arrived at the airport, because this time I was the one leaving.

The airline was Cathay Pacific, the plane a 747. 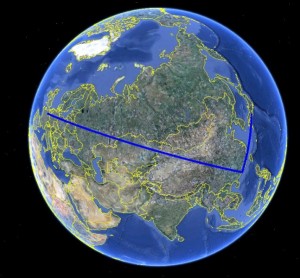 I’m not scared in planes, definitely not, but for some reason, I became a bit nervous when the Boeing took off. I hadn’t flown in about four years, maybe that’s why.

The equipment inside the plane was quite impressive. At first, I thought this was because it was my first flight in several years and things had changed. However out of the four planes I took during this trip, it was the only one that was special, the three other ones where exactly like the ones I remembered from way back in the early 2000’s.

So what was so special about this one plane?

First, the seats. Don’t you hate it when the person in front of you pushes their seat backwards in order to sleep and you have almost no room left? Of course you do.
Well, on that plane, the mainframe of the seat was fixed. It was the cushion on which you’re seated that kind of slid so that your position shifts from seating to vaguely laying while the seat itself didn’t move one bit. As a result, nobody bothered anybody when they wanted to sleep. Awesome! (well, there were a few snorers here and there)

I must also tell you about what was happening on the little screen in front of you. Well, the screen itself was no different from the usual, but what was on the screen definitely was. One could watch films, TV shows and such, but they were on demand! The broadcast started, paused and stopped whenever you wanted; you didn’t have to catch the movie as it started and miss it if you fell asleep. If I’m not wrong this feature has become more common lately; but back in 2009, it was the only time I had seen that on a plane.
And if that was not awesome enough, the choice of movies was quite impressive, more than 50 films, 30 of them being interesting (usually if I’m interested in one movie from the selection if I’m lucky). Even better, I hadn’t seen about 10 of them. I was going to spend the trip (12 hours) watching lots of films.

There was one major problem though. The sound was just terrible. I could barely understand the dialogues, so after 10 minutes into No Country for Old Men, I came to the conclusion that I’d have to wait a little bit longer to watch all of these films. As it seemed that most people spent their flight watching movies when they didn’t sleep, I guess I was the unlucky one that picked the seat with a bad sound system.

Fortunately, the little magic screen didn’t only offer movies and TV shows, but also… video games!!! Simple ones, arcade games, quizzes, etc. They helped spending time, as for some reason I didn’t manage to read much (an activity I do a lot, even more so on planes). On the other hand, I became really good at Bejeweled…

12 hours later, the sun rose above Hong Kong as the plane landed…

2 thoughts on “To the East”