After two pretty tiring weeks at work (and the upcoming one may also be along those lines), the best thing to do this past Sunday was to go spend the day to Ogijima. So we hoped on Meon at the first occasion and there we were.

I have seen Ogijima empty, I have seen Ogijima full of visitors (be it for the Triennale 2010 or other special occasions like when the daffodil fields are in bloom) but it’s a new Ogijima I discovered yesterday. One full of life and effervescence, as three days before the opening of the Setouchi Triennale 2013, the island was full of artists and Koebi-tai volunteers who were all hard at work, as well as a few visitors like us. In any case, I had never seen the island so full of life, and it was a warm feeling.

Yesterday, I also finally met with Arthur Huang, with whom I’ve exchanged e-mails for a few months now. And as he had already finished installing his works in the morning (it went fast) he directly came to welcome us as we got off the ferry. We then had lunch together and walked around Ogichō. Of course, he also introduced us to his Houses of Light as they were ready for viewing. 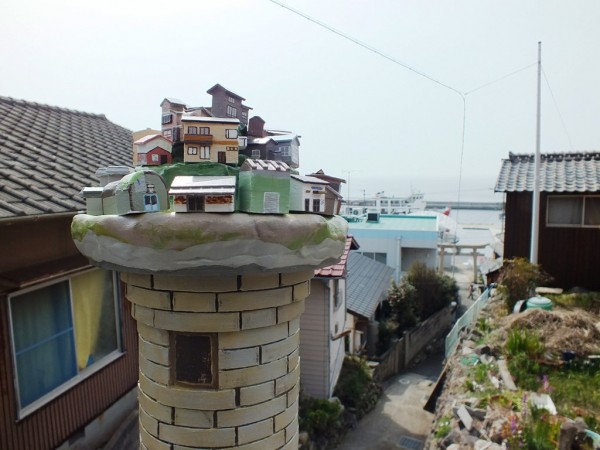 In the port, one of the boats redecorated by Team Ogi : 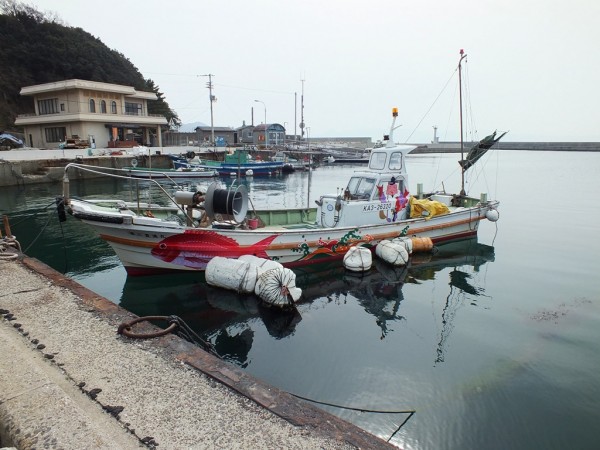 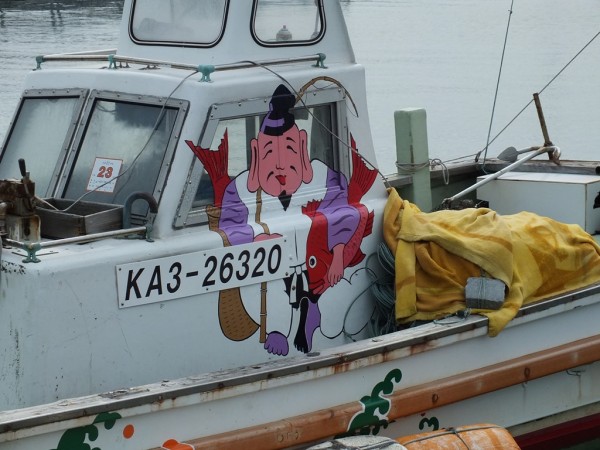 And if you’re wondering where to find the Group 1965, the answer is clearly visible even from afar on the school’s wall:

Some people were busy working in the school, but I didn’t dare to enter for some reason. I’m not sure if they were Koebi-tai members or the artists themselves. Probably both.

Concerning, Team Ogi, everyone was extremely busy, either with finishing painting the boats or setting up flags all over the village (and I realize that I didn’t really take any picture of the flags): 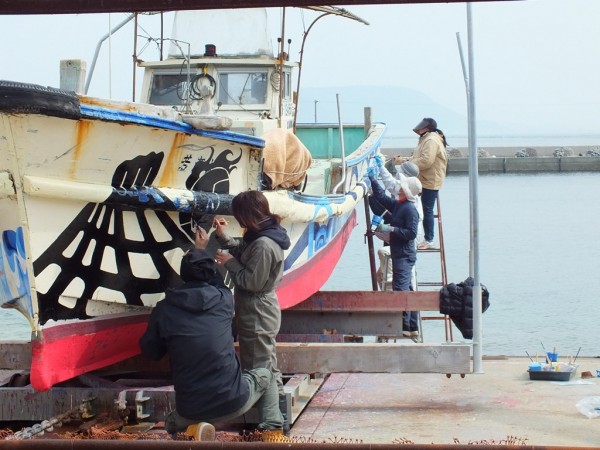 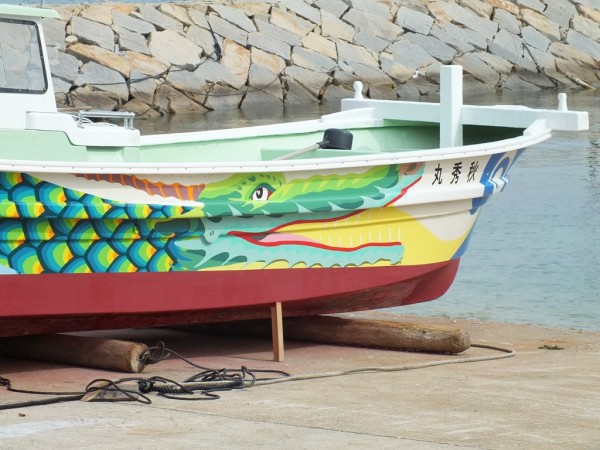 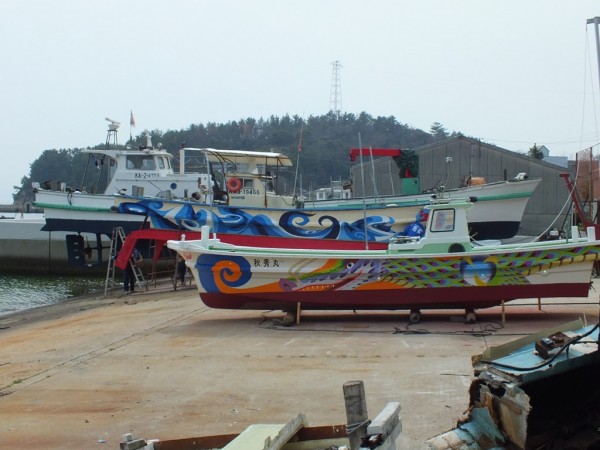 There’s another piece of art that is finished and already available for viewing. It is Walking Ark by Keisuke Yamaguchi. However, I have to admit that it is also my first disappointment. I know that with such a large scale festival, you are bound to dislike some of the art, but so far, I always was very lucky with all of the art on Ogijima. I can say that I genuinely love all of it. However, this artwork falls into the very trap that every other piece on the island had managed to avoid, that is not to “fit” on the island, to just happen to be in the same space. I remember my very first encounter with Yoshifumi Oshima when he explained why he had decided to work with Onba: because he didn’t want his art to “disfigure” the island, but on the contrary to fit into the already existing island’s aesthetics and culture. Maybe this is why Onba Factory ended up being so loved by islanders and visitors alike, and now one can even say that its Onba are as iconic to the island as its lighthouse is. Walking Ark does exactly the opposite. It’s just an artist’s vision, play, that has nothing to do with the island’s identity despite the fact that it seems here to stay. At least, the piece is far from everything and doesn’t really bother anyone or anything as long as you don’t get near it. I’ll talk about it into more details on its dedicated post. 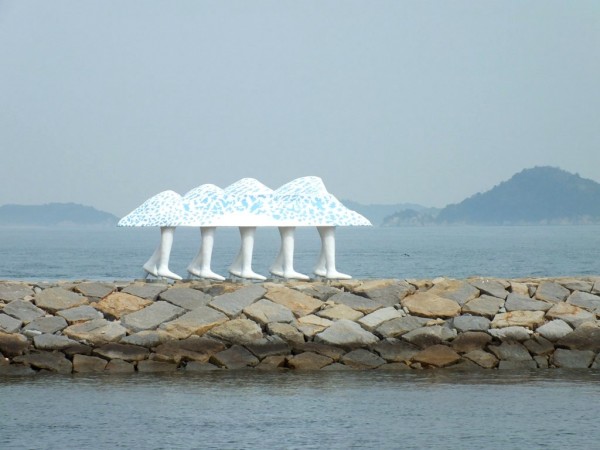 And as I just mentioned Mr. Oshima, you know that a day on Ogijima is never complete without at least a short moment with Mr. Oshima. Except that this time, that moment was very short indeed, I had never seen him so busy: 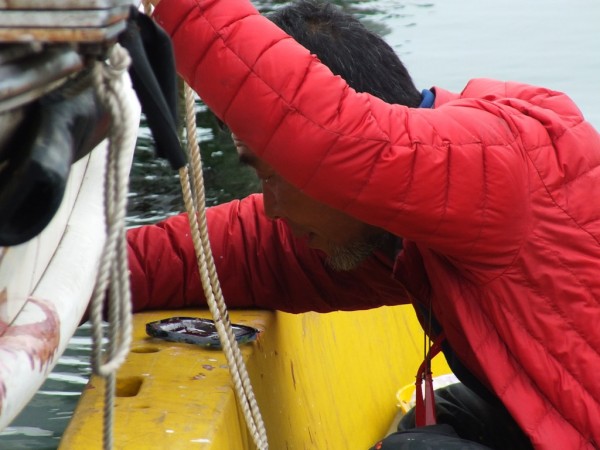 And if you’re wondering what he was doing, these next pictures will give you a better idea:

If I understood everything, a technical problem has slowed down the project and Team Ogi ended up having to paint three boats at the same time, except that Ogijima’s port is not exactly big and only two boats can be put on drydock at the same time. So Mr. Oshima had to paint that boat directly in the water. I let you imagine the thing for a second (I should have filmed him but I didn’t want to disturb him): having to paint a moving object (a floating boat) while being on another moving object (a floating smaller boat). Pretty insane. I had never seen Mr. Oshima so tired.

So we didn’t stay too long near him, and went a bit further away with his adorable wife, Chii Oshima, who was slightly less busy, but just slightly. We soon left her to her own things and headed near the ferry dock where the rest area was being turned into an artwork too. It is now called The Ordinary by Eriko Yano.

Ms Yano was putting the last touches to her work when we met her (contrarily to what the pictures may imply she was not alone working on it; she had help from the Koebi-tai staff):

I didn’t look at The Ordinary in details, I’m waiting for it to be finished, but it seems like an interesting work, and I really like the fact that this space is being turned into a place where one wants to stay, which was not necessarily the case before. At best it used to serve as a backdrop for the Sunday morning market, at worst it was simply ignored. Ignored, it won’t be anymore. 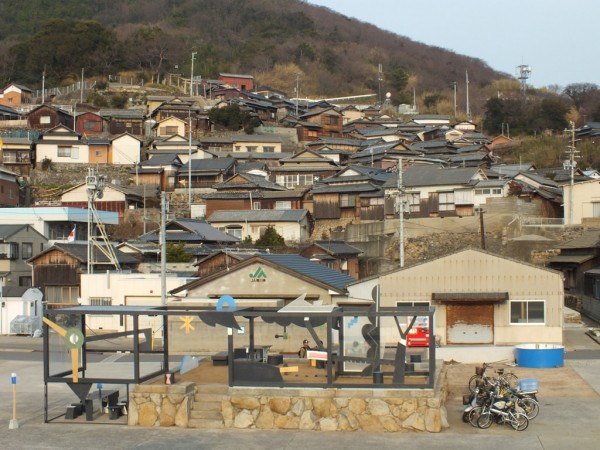 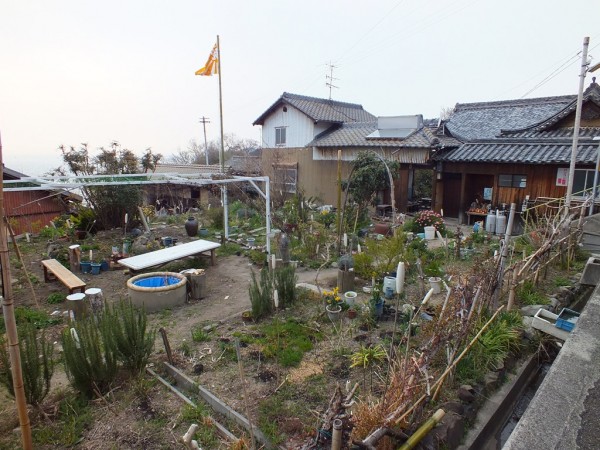 One of the things I really like about the festival is the fact that the local population gets involved. I had already talked about the fact that some works are made with the collaboration and help of the locals; but some people get involved in different ways, on their own accord, simply to welcome visitors better and such. For example, this “herb garden.” I remember that three years ago, the owner of this house had designed a small resting space in front of her house, and she was even selling drinks and a few decorative objects. This year, she had turned her herb garden into a rest area apparently, and I suspect that she has some more crafts artifacts for sale.

Also, a few temporary minshukus are opening on the island. People missing the last ferry was a common occurence three years ago and it created all sorts of problems, both for the visitors for obvious reasons and for the locals who ended up with unexpected guests in their houses at times. This year some locals took the initiative to turn their houses into minshukus for the time of the festival.

In any case, when you’re on the Setouchi islands, remember that golden rule: the last ferry is always too early! 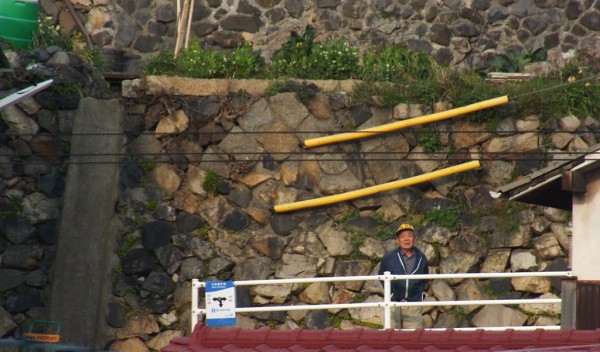 Another amusing anecdote concerning the people of Ogijima and their rapport to the art on their island. They are very proud of it, but won’t always show it directly. For example, this man and a few others who were just having a stroll there, for no specific reason, except that this spot also happened to be where one of the three Houses of Light had been installed in the morning (you can’t really see it on the picture, it’s behind the white wall on the right side). And so, a few of the locals rushed to see them, except they didn’t want to look like they were rushing or even like they cared that much. At some point in the afternoon, as we walked by it (unfortunately, Arthur Huang wasn’t with us at that moment), the owner of the small garden next to it (you can see her onba on the previous picture) was working in it and her friends and neighbors came and stopped by for a chat. The artwork instantly became the topic of the conversation. She then announced jokingly that she was now in charge of protecting the piece from burglars and such. So every night, she will take it out to her house and put it back on every morning. Of course, this is not true, the House of Light is sealed to the guardrail (less from fear of burglars than of bad weather conditions and clumsy visitors). An example among many others how the islanders love the art that is given to them, how they make it their own.

The main goal of the Triennale is to revitalize the area as it is in real danger of literally dying (Ogijima’s population for example is dangerously decreasing every year). Whether this will be a success or not is still a little bit up in the air. The festival is a success in itself, but the success of its mission is still a bit unclear even if islands like Ogijima are completely different from what they were pre-festival, it doesn’t mean that they are safe yet, far from it. However, regardless of whether the long term mission will be a success or not, one major success of the Setouchi Triennale is that it has managed to make the life of the local population more beautiful in several ways.

Soon, the time for the last ferry arrived. 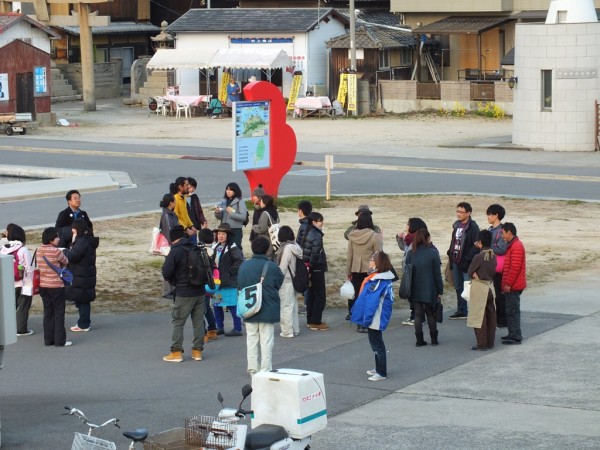 Thankyous and goodbyes were said between the artists and the Koebi-tai volunteers;
between those staying and those returning to Takamatsu. 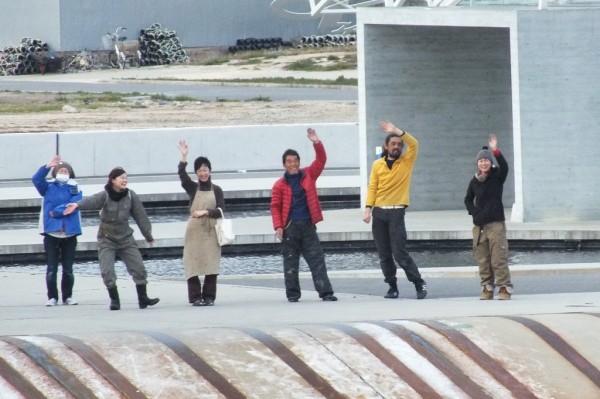 Bye bye and thank you!

(from left to right: Kayoko Kōi from Team Ogi, a Koebi-tai volunteer, Chii Oshima, Yoshifumi Oshima, Takashi Nishibori whom I didn’t meet and Sayaka Ishizuka whom I met last month and who was very busy too on Sunday, so we didn’t speak much beyond “how are you, thank you and good luck”) 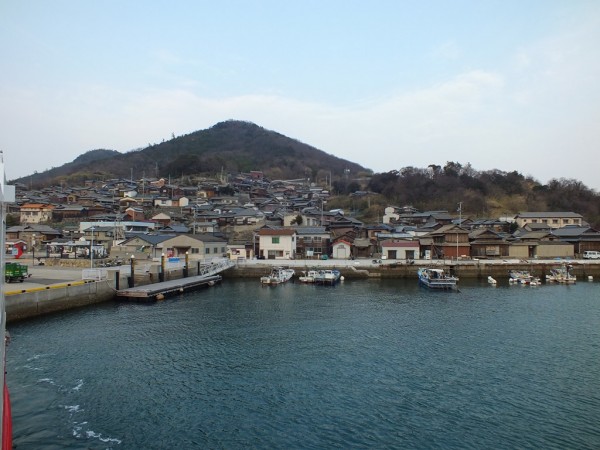 See you next week Ogijima! 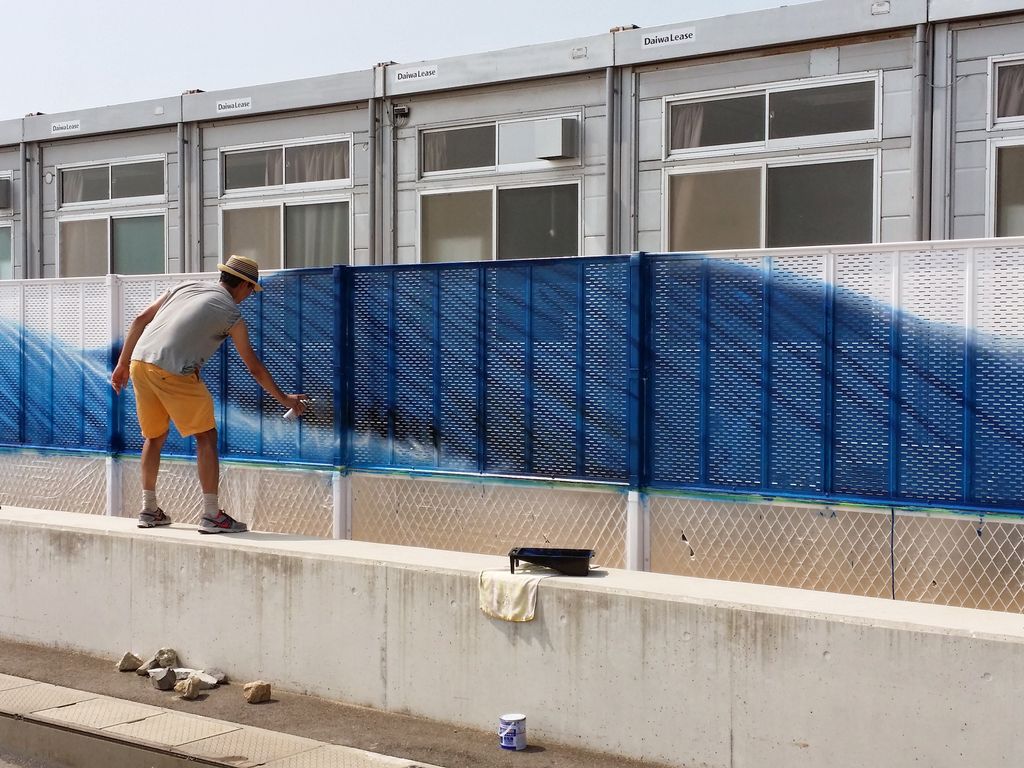 Well, the title sums up pretty well what I did on Sunday. A few weeks ago, Oscar Oiwa invited me to […] 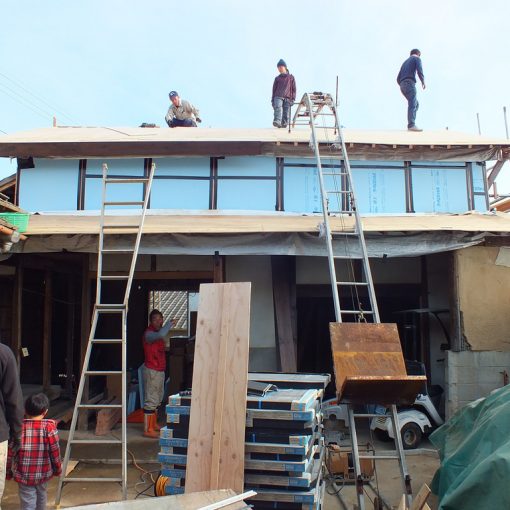 There is currently a small problem on Ogijima. In 2016, two of its most popular cafés have closed. Murakami Shoten, the […] 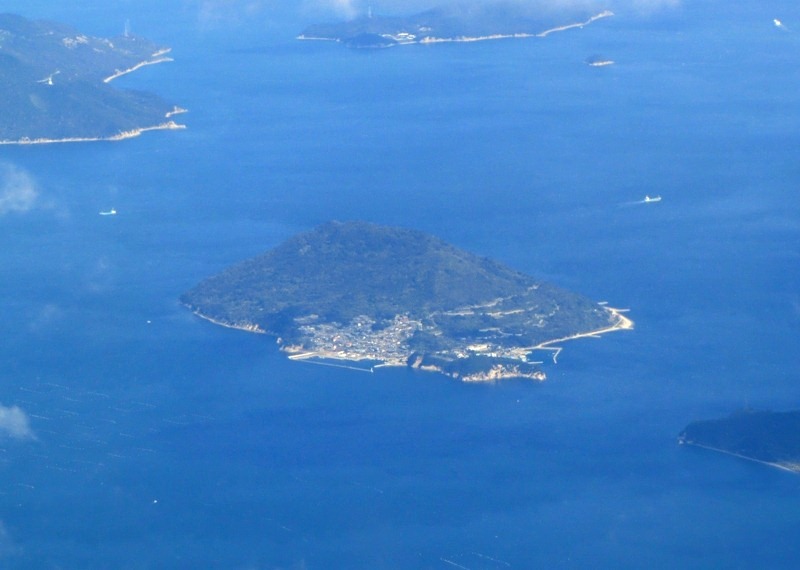 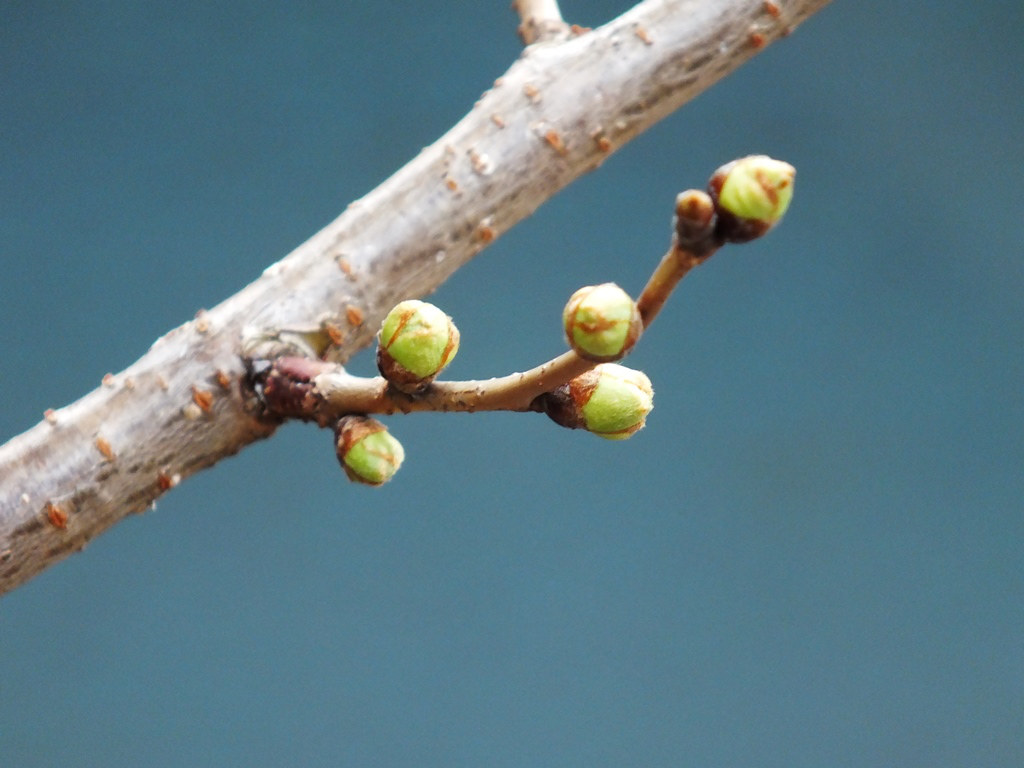 … and with it some major changes on the blog. You may have noticed the new look. Do you like it? […]