This year I had decided to blog about my Setouchi Triennale 2019 visits in chronological order, and as early as my second post about it, I’m throwing a wrench into it. See, I’ve been quite busy and I also caught a nasty cold (my son has started preschool; random nasty colds have started to magically appear in the household again, how odd), and I’ve just realized that the Spring session is ending in two weeks (already!), and at the rate I’m posting things, I’ll talk about Shamijima‘s art after the fact, which would be a shame!

As a reminder, Shamijima only joins the Setouchi Triennale during the Spring session for some reason, which means that the art on the island is available for one month only!

So, too bad for my chronological order, the second episode of my reports is actually my fourth day attending the festival (it’s not like you really care about the order, right?) and it is:

We were on May 1st and as often, after parking the car, our first encounter on Shamijima was Tanya Preminger‘s Stratums. 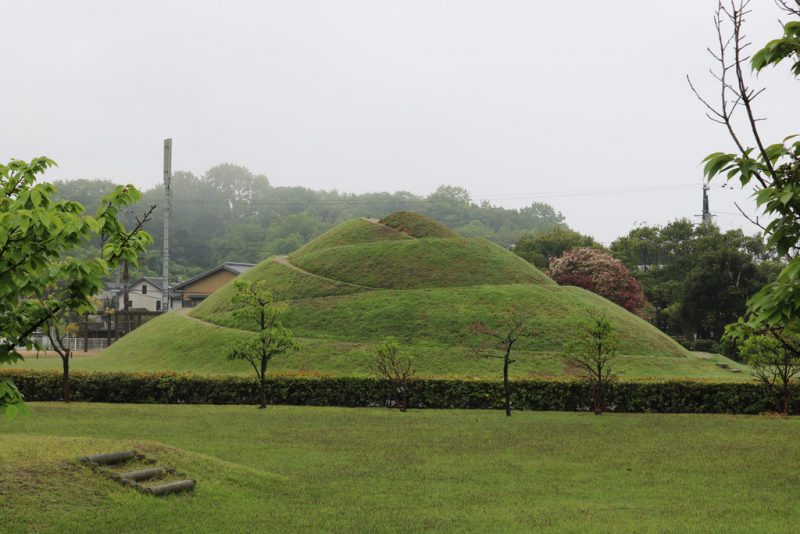 I gotta admit that the rain that had been pouring for three days had a good effect. I could see a green Stratums. Almost every time I see it, it’s been pretty dry and the grass is more yellow or brown than green.

If you want to know more about this cute little mountain, there are a few old posts in the blog, including an interview of Tanya Preminger.

The second artwork that we encountered was another Setouchi Triennale veteran that I’m always happy to see again: Sora Ami: Knitting the Sky by Yasuaki Igarashi. 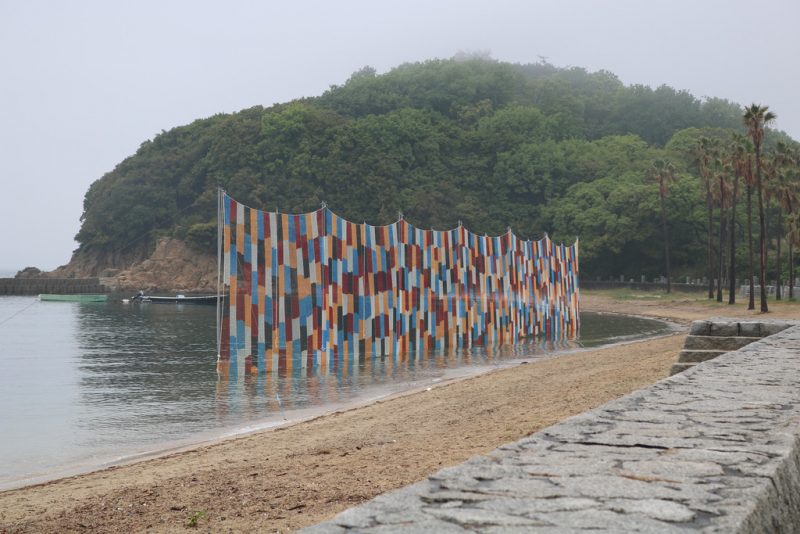 It doesn’t look like much, “just” a multicolored net. But the play with the colors, the light, and the landscape is what makes it fascinating.

However, while Stratums has been around since 2013, Sora Ami is actually remade every three years by the artist with the help of the people from some islands from the area, namely, Shamijima, Seijima, Yoshima, Iwakurojima, and Hitsuishijima. Those islands are not picked at random. They are the five islands that are attached to the Great Seto Bridge (or upon which it has been built).

If you miss it on Shamijima, know that it will move to Honjima this Fall.

The reason why we had decided to go to Shamijima on that day, despite the rain, is that there was a little event I didn’t want to miss (especially because I had missed the installation proper the day before, which I’m very sad about).
The opening ceremony of Oscar Oiwa‘s Oiwa Island 2.
It’s another veteran artwork of the Triennale and one of my favorites. It started on Ibukijima in 2013, moved to Shodoshima in 2016 and to Shamijima this year. Sadly, it’ll be available only for the Spring, but that’s better than nothing I guess (and fingers crossed for another location in 2022, or even better, a permanent one?).

Oscar’s and Sakaide mayor’s (not pictured) speeches finished, community leaders from the Shiwaku islands gathered to sing a traditional song that is more than 400 years old if I understood correctly: 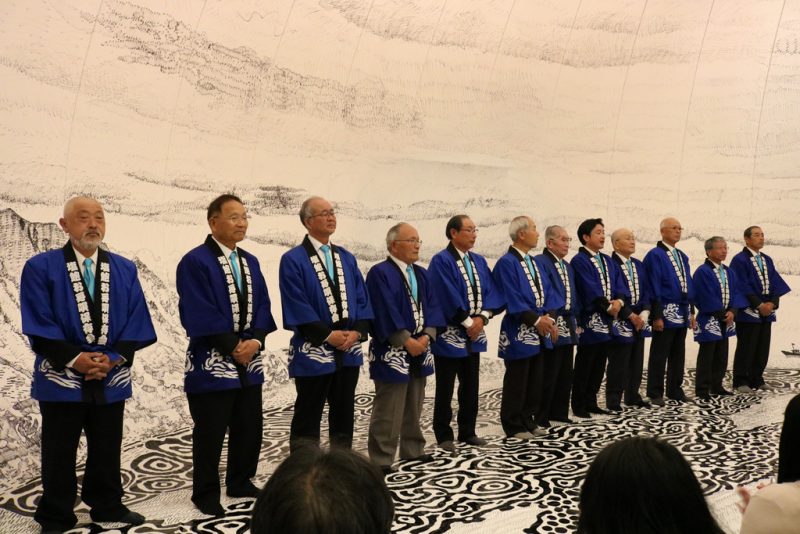 Not many pictures of Oiwa Island 2 this year (it was too crowded, because of the ceremony, for decent pictures you need to have the place pretty much for yourself – worry not, I have many from 2013 and 2016, including some that I haven’t put online yet).

I’ll also try to return before the end of the month.

I didn’t take any picture, but right next to Oiwa Island 2, you can find Stories of 12 Islands: Animation of Sea Wanderings by Masahiro Hasunuma. It’s a series of 12 hand-drawn flipbooks telling small stories about the 12 islands of the Setouchi Triennale.

Here is a video I shot of one of them, three years ago:

You can find the other ones (as well as a few other things) on Mr. Hasunuma’s Youtube account.

Sora Ami again, one hour later, the tide had gone down a little bit. It was also a good time to have lunch at the Umi no Ie (Beach House) nearby.

Pivot by Madeleine Flynn & Tim Humphrey. Three seesaws equipped with loudspeakers and microphones that allow you to communicate with an AI. For more details, an interview with the artists is coming in the following days. Stay tuned.

For this month-long project (even longer actually, they started before the beginning of the Triennale), the artists are turning a regular fishing boat into a houseboat that will be seaworthy. Not sure what the end result will be and how long people are going to be able to enjoy it. One more reason to try to return to Shamijima by the end of the month.

The Food Club by Anahita Razmi

The interest of this artwork is not what there is to see (not much really, mostly a kitchen, some food items, and a few more things), but the idea behind it. The artist is trying to create a Japanese-Iranian cuisine, basically. I assume there are a series of workshops and such, but Ms. Razmi was absent when I went. I tried to contact her and I hope she can tell us more about it soon (and one more reason to return to the island before the end of the Spring session)

However, there is a website dedicated to the project and giving more details: The Food Club website.

This beautiful artwork starts with an hommage to Shamijima’s history of salt production. Indeed, the island used to be a major salt producer since the earliest days of Japanese history until a few decades ago.

In the second part of the installation, you enter an even darker room and only see what seems to be a surface covered with salt, with some lit holes on it. 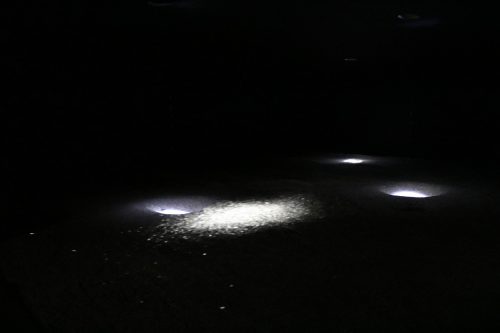 As you continue walking, you actually go under that surface and discover what’s actually going on:

The holes have been forming stalactites and stalagmites of salt.

And before going any further, please read the interview I made with him: 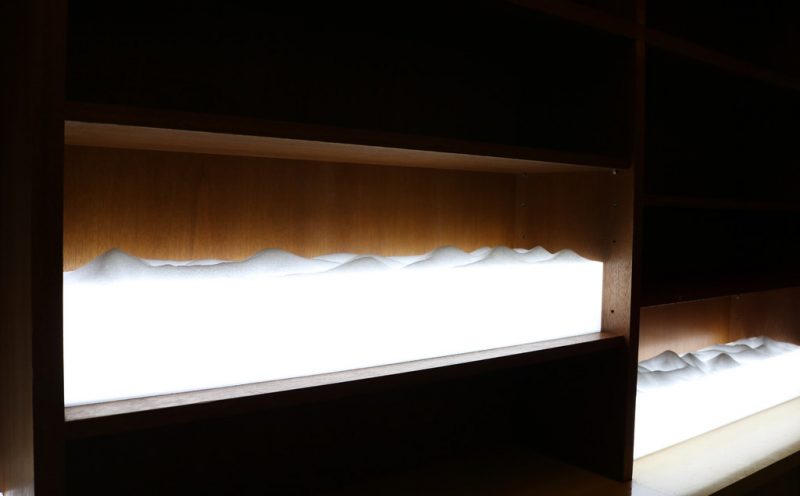 The Moon and the Sun in empty bookshelves 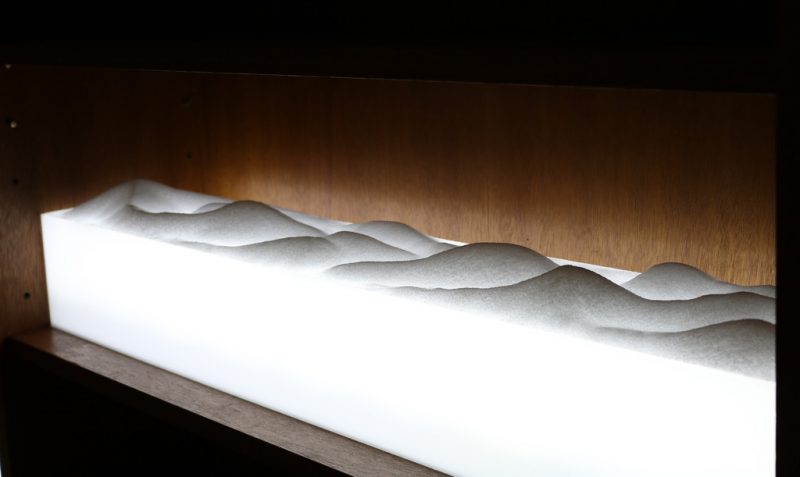 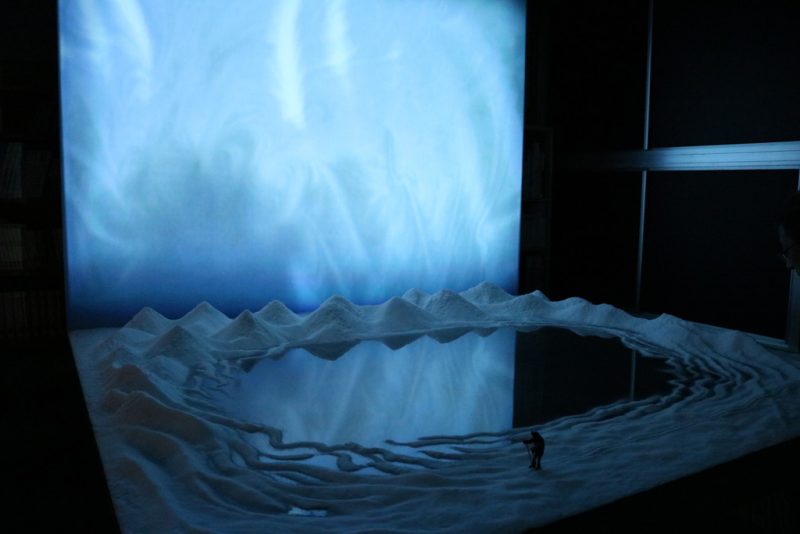 Solvejg, background of a memory

Thank you, Leonid, for those beautiful pieces. 🙂

Exiting for building, a small surprise: 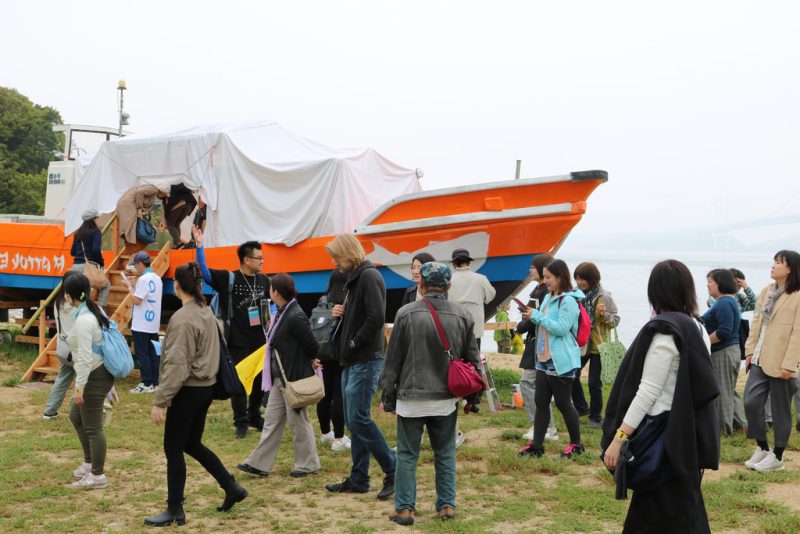 Mori-san guiding one of the official Setouchi Triennale tours! 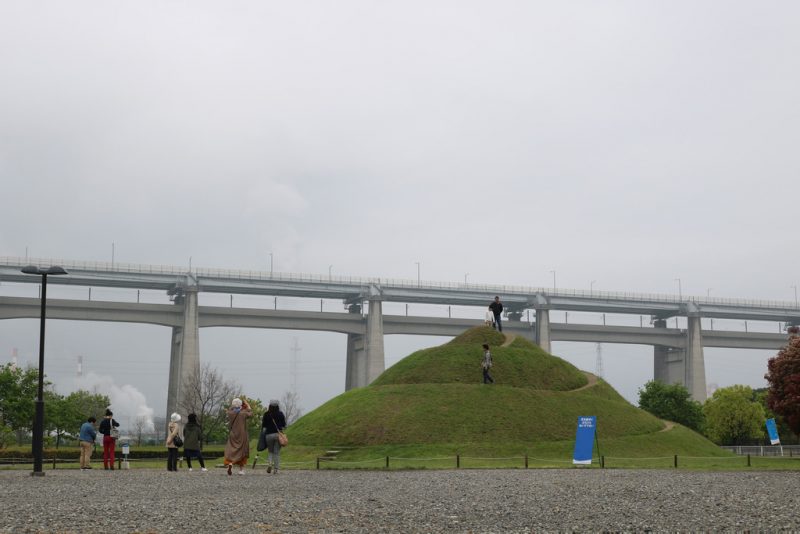 The day wasn’t over yet.

In 2013 and 2016, the Kobe Design University was part of the Triennale and exhibited its works in Shamijima’s former school. This year, things are a little different as they’ve moved to nearby Seijima for a “satellite” art project to the Setouchi Triennale (in other terms, it’s not part of the Triennale, but it’s associated to the Triennale – there are such projects here and there every three years):

Just like Shamijima, Seijima was attached to Shikoku about half a century ago by a land reclamation project and is not really an island anymore. The “good” side is that thanks to that, depopulation on the island has been much weaker than in other places (no need to leave the island when you can commute back and forth easily) and it still has about 700 residents. The downside is that the view is less than ideal: 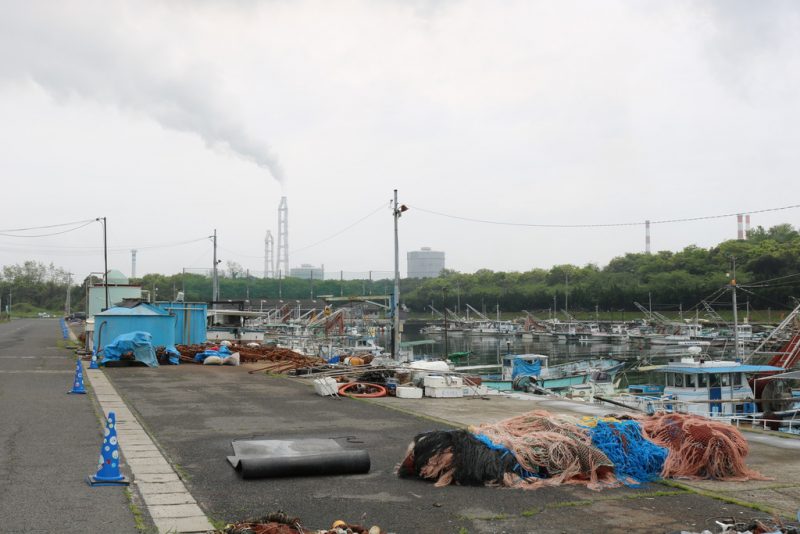 The huge industrial zone between Seijima and the Great Seto Bridge may be providing jobs to the local population, but I’m not too confident about the effect on the environment. The effect on the landscape is self-explanatory.

There are five works of art on Seijima. You won’t find them on your Triennale Passport, but the three of them are free.

The first two are on the west side of the island, in the village of Kitaura.

Striped Sea is a nice wall painting by Reika Nakayama. She was on site and painting and small boat when we visited.

In a house nearby there was Shrine Dedicated to Ancestors by Hiroyuki Kawai. Nice, but not mindblowing.

After, we walked to the next village, Takeura, located on the east coast of the island. We walked on a small forest path. My wife wasn’t too pleased with the many caterpillars hanging from trees with silk threads. 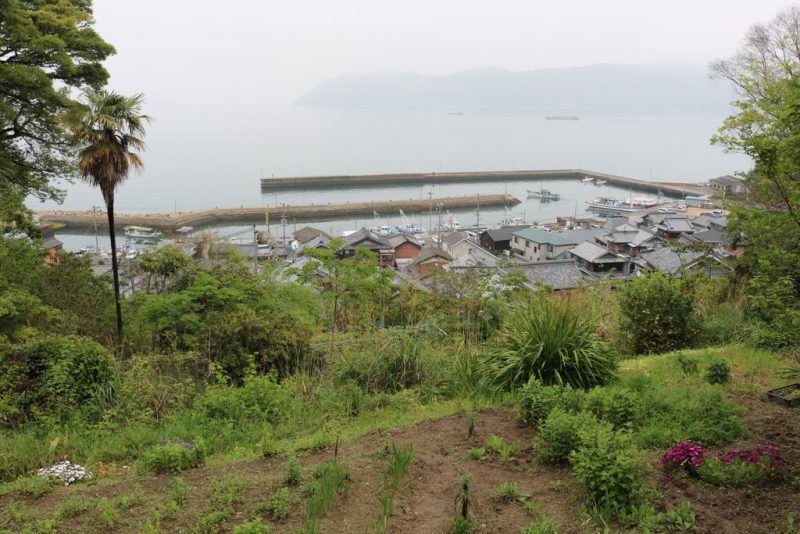 On the side of the hill, Takeura reminded me a little bit of Ogicho.

It’s more compact, though, but seems to have more gardens. 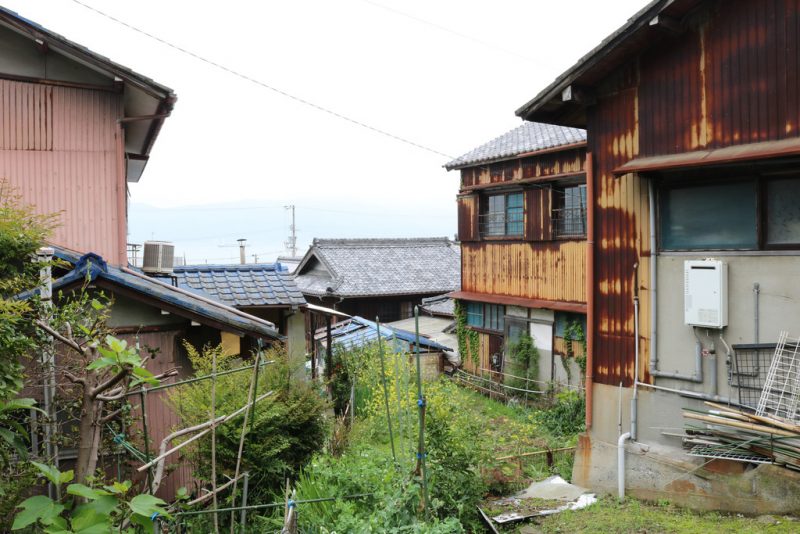 The next two artworks were located in the same house.

It was simply impossible to take pictures of Millenia-old Starry Sky by Mitsuo Toyazaki. It’s shame as it was the most beautiful of the five artworks. It looked as if a starry sky had entered a room.

The other one, Island and Portrait by Jibak Yoon was pretty great too.

First, you see the Yoshima islands made of wire floating in the dark room:

But when you look down on the tatami floor, their shadow looks like this:

The fifth artwork, Gate to the Sky and Sea by Tetsuro Fujiyama was in two parts and located near Takeura’s port. 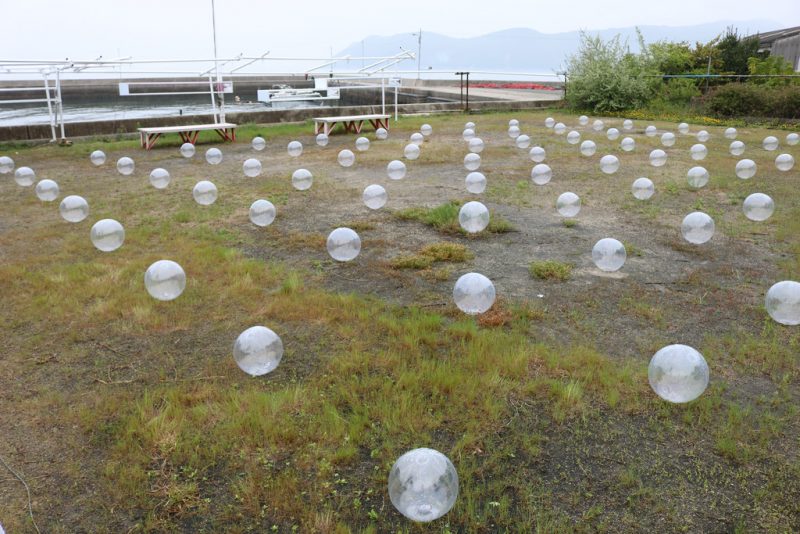 Nothing too special, but it was pleasant to the eye.

And (you can see them in the background of the previous picture), some elongated frames that you’re supposed to look through.

It did look better in real life – not really an installation to be photographed – but unfortunately, it seems to be an installation made for sunny days and blue skies. Oh well… 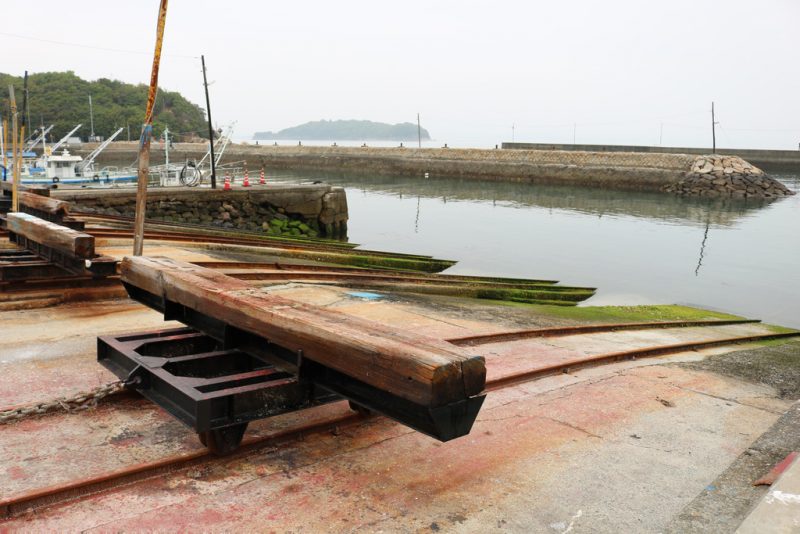 It was soon time to return to Takamatsu, but before heading home, a short stop at an old favorite of mine: Lin Shuen-Long‘s Beyond the Border – the Ocean. While I’ve seen it regularly for the past three years, you can only enter it during the Triennale. 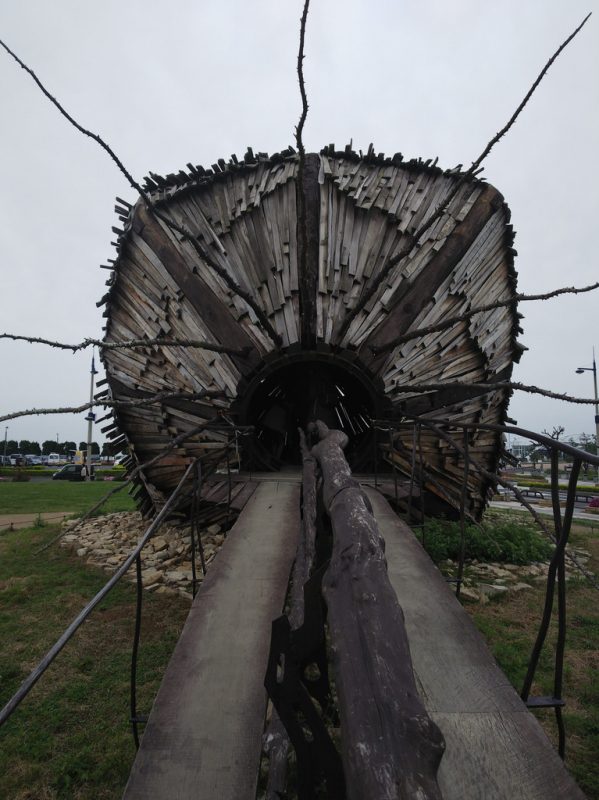 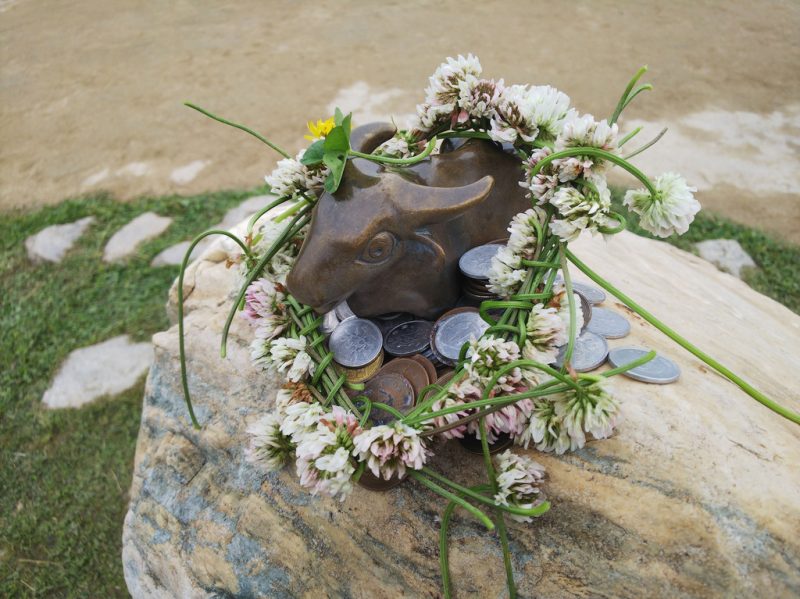 Tourists will do the darndest things! It always terrifies me when tourists start doing the same random things in mass. You know how this works. One person does a random thing for whatever reason. Another one sees them (or sees the result) and does it too. Then a third one will do it too. And soon enough, people will do it by dozens, hundreds, thousands, the internet will talk about it as an ancient tradition, and millions of visitors will turn a once beautiful spot into a nightmare. Luckily, this poor cow hasn’t reached this stage yet, but all those coins are there for no reason at all, and it really reminds me of back when I lived in Paris and that in just a couple of years, tourists turned the Pont des Arts, one of the most beautiful spots in the heart of the city into the ugliest one, because one couple, one day, decided to leave a lock there because they saw it in a young adult fiction or who knows where.

Well, at least if it happens at Sunport Takamatsu, I can come at night, collect the coins and become rich. 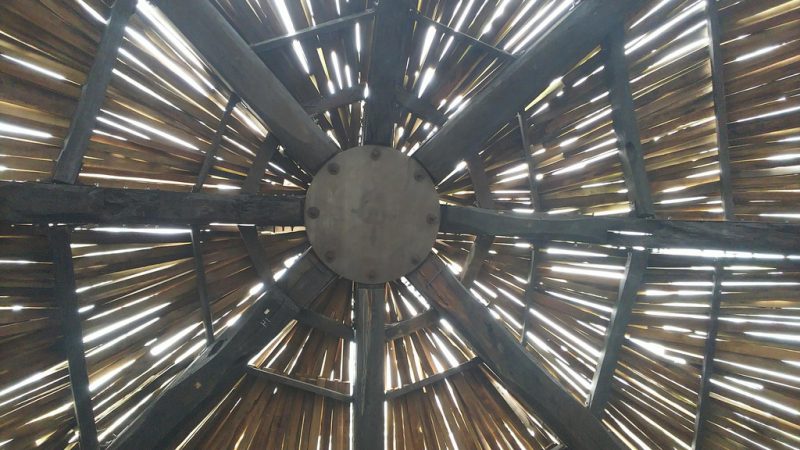 OK, that’s all for today…

Waiting for the third part of my Setouchi Triennale 2019 reports, make sure you read the first one if you haven’t yet.