The day was May 7th. It was the first day post Golden Week, my sixth day spent on an island for the Setouchi Triennale 2019, including my third on Ogijima (yes, this Spring session, was Ogijima-heavy indeed, but my life is Ogijima-heavy, so it makes sense…).

Finally, the crowds were gone, and life on the islands was slowly returning to its normal pace, or at least its normal “Triennale pace”.

Some sort of quietness and normalcy had returned to Takamatsu Sunport and to the ferries indeed. The islands too were much less crowded and much more navigable. And the goal on that day was to finally go see some art on Ogijima indeed.

Actually, even during the Setouchi Triennale, if you go on a weekday that is not a holiday, you will not encounter many waiting lines and not a lot of crowds (well, except maybe on Naoshima, that island is crowded all the time nowadays).

You may even get some artworks by yourself if you time your visits well. I could tell you how, but then I won’t be myself anymore when I do it.

OK, if you insist, here is the trick (at least on the small islands). On a day that is not crowded, go see the artwork of your choice just as a ferry arrives (of course, that means you’ll take the next one at the earliest). A lot of the people who already were on the island are going to be leaving on that ferry and are going to be at the port waiting to board, and at the same time, the next batch of visitors is still on the boat, so this is always the moment when you have the least amount of people walking around the streets and visiting artworks (this also works with buses on Shodoshima). Now, don’t make me regret having given you this tip and don’t come bothering me while I’m enjoying a piece by myself. 😉

Our first stop of the day was Sarah Westphal‘s The Sea Within – The See Within. I already had the chance and privilege to experience it before opening day, with Sarah herself as a personal guide, and I was glad to finally get to see it again. I only took one picture. The room being dark it’s hard to take good pictures and it’s really one of these artworks that need to be experienced, no picture can really do it favor. Make sure you do not miss it when you visit Ogijima, it’s really one of my favorite new artworks this year.

Upon reflexion, as it’s unlikely to become a permanent installation due to its very humid nature, I guess I’ll have to take lots of pictures during my future visits while I still can (or we could be optimistic and hope it becomes permanent).

Also, if you haven’t read it yet, make sure to take a look at the interview I did with Sarah a few months ago:

Our next stop wasn’t art but food. We had an early lunch at Ogikenohi (the library’s seasonal “café”) to try their new curry, which is made with a lot of things from the island (not everything though, at least not the rice and not some of the spices). It’s a fish curry (the fish is indeed from the island) and it’s delicious:

After walking by it almost a dozen times and seeing Goro Murayama at work every time, I finally entered Generative wall drawing on Japanese paper house. Murayama-san was gone though. More about it another day I’m sure:

As you can also tell by the following site, Takeshi Kawashima & Dream Friends‘ The Space Flower – Dance – Ring, I was a bit in a close-up mood that day.

It’s actually one of the things I really like about Takeshi Kawashima‘s art. You can see it and enjoy it at different scales, and it will look and feel very different if you take it as a whole or instead if you look carefully at the details. It will almost feel like two (or even more) different artworks in one.

At the “all-new all-different” Sea Vine, still by Haruki Takahashi, I managed to do something I have been trying to do for as long as I’ve known this artwork (wow, that would be nine years). Get a picture of both the art and the seascape view behind:

Does this mean that my photography skills are improving or that I finally have the right tools for it? Hopefully a little bit of both.

Sea Vine was followed that day by one of my all-time Setouchi Triennale favorite: Mayumi Kuri‘s Memory Bottle:

Did I tell you I was in the mood for close-ups on that day?

And it’s not over. Cathy had to return to Takamatsu, so I walked down to the port with her, for more close-ups, this time of Jaume Plensa‘s Ogijima’s Soul:

And then, I ran uphill to my next stop, because if there is one artwork you have to have for yourself when you’re on Ogijima, it’s this one.

Oh… Damonte & Co has a new sign on their wall. Another island tip. You should stop there too, be it for lunch, a snack or a coffee. If you do, tell them I sent you. And no, I’m not getting a commission… Hmmm… That could be an idea… Kaisho, if you’re reading this… 😉

You’ll probably come to Ogijima for the art, as you should, but the truly most beautiful thing is the island itself and the view from its streets:

Yes, I made it to destination, and with no one around… Almost no one… The Koebi volunteer in charge that day was about to have his lunch break. Not so fast! I’m very sorry, and I feel truly terrible to cut on your break time, but I must enter the artwork before the new visitors, who are now off the boat and at the port come up here! He was very understanding. Thank you.

So, here we go. I was so glad to enjoy Oscar Oiwa‘s The Room inside of the Room again (I hadn’t seen it in more than a year I believe)!

If you’re not familiar with this room, just know that, yes, all the pictures have the right orientation (well, almost all) and that no mistake was made in uploading them.

One part of Rikuji Makabe‘s Project for wall painting in lanes, Ogijima Wallalley. Honestly, I’ve always found this title a bit too long, so do what you want, but I’ll keep on calling it just Wallalley.

It can be found at several locations on the island. Can you find them all?

My “ride” entering the port.

Wait a minute, what is that boat following?

I’m asking only for dramatic effect. I totally know that boat, I even rode it a few times, and it was featured on the blog not too long ago. It’s one of the boats from Takamatsu Marine Taxi, one of the main taxi boats in the area. And I knew what it was doing that day; carrying the members of the Triennale’s official tour of the day.

I waited a little bit (from Meon which was about to depart at any time) and lo and behold, the group arrived guided by my friend Nobuko (it was her first day on this course, she was a bit nervous but did great):

But for me, it was time to return to Takamatsu.

My stamps for that day (it really should be a bit more, I didn’t bother stamping some of the public art that wasn’t new):

That’s all for today, but if you want to know more but haven’t done so already, may I advise you to read the previous episodes of my adventures at the Setouchi Triennale 2019? 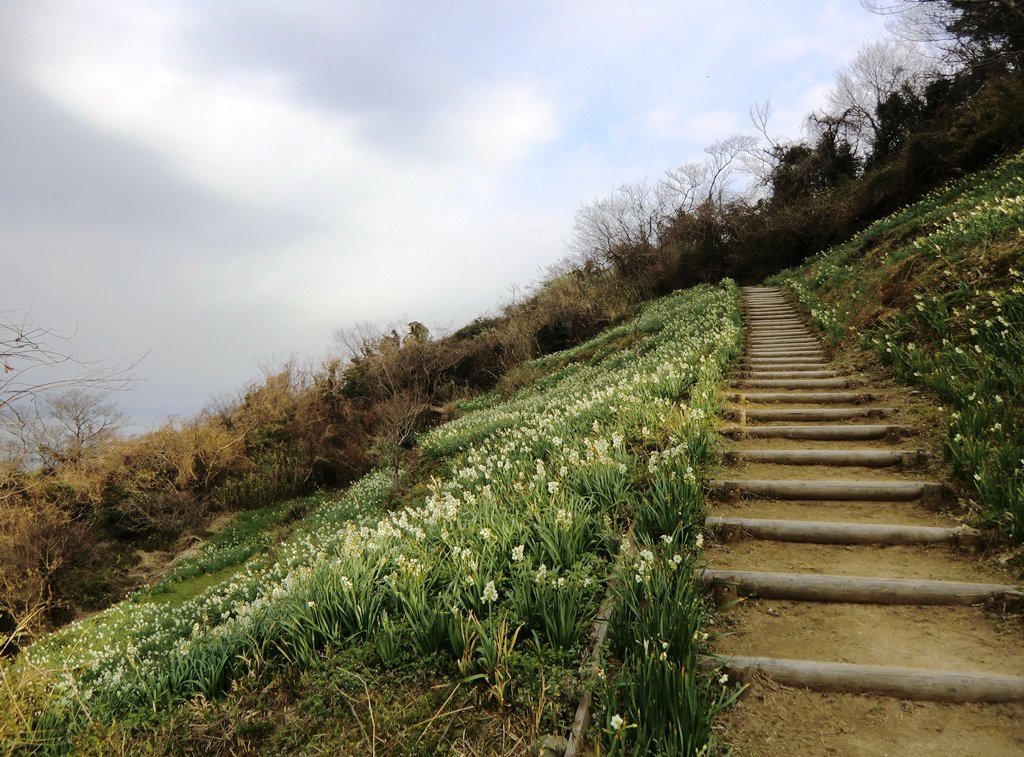 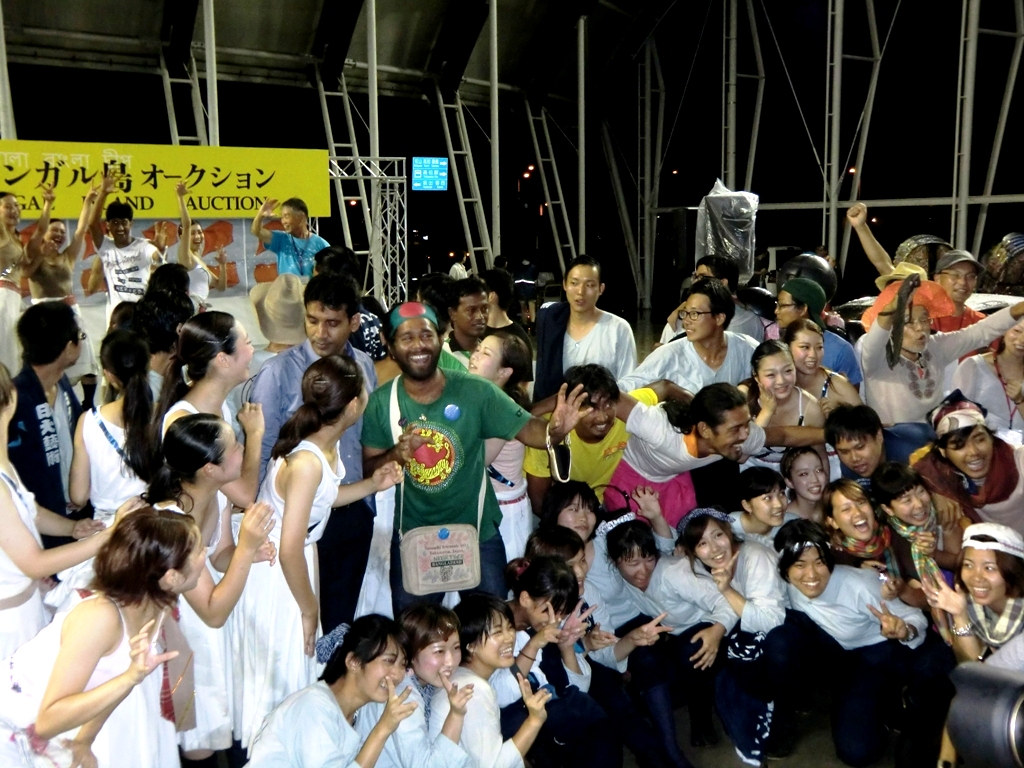 Last night, we waved goodbye to Bengal Island and the summer session of the Setouchi Triennale. Here is a small report […] 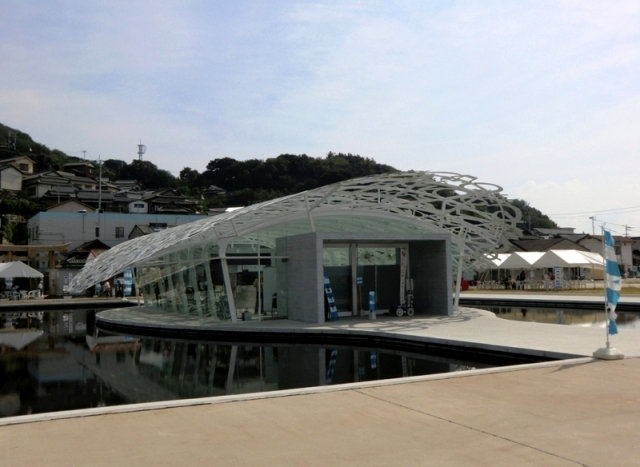 Alright people, after this week’s little computer adventures, it’s time to go back to our normal programming on Ogijima and to […] 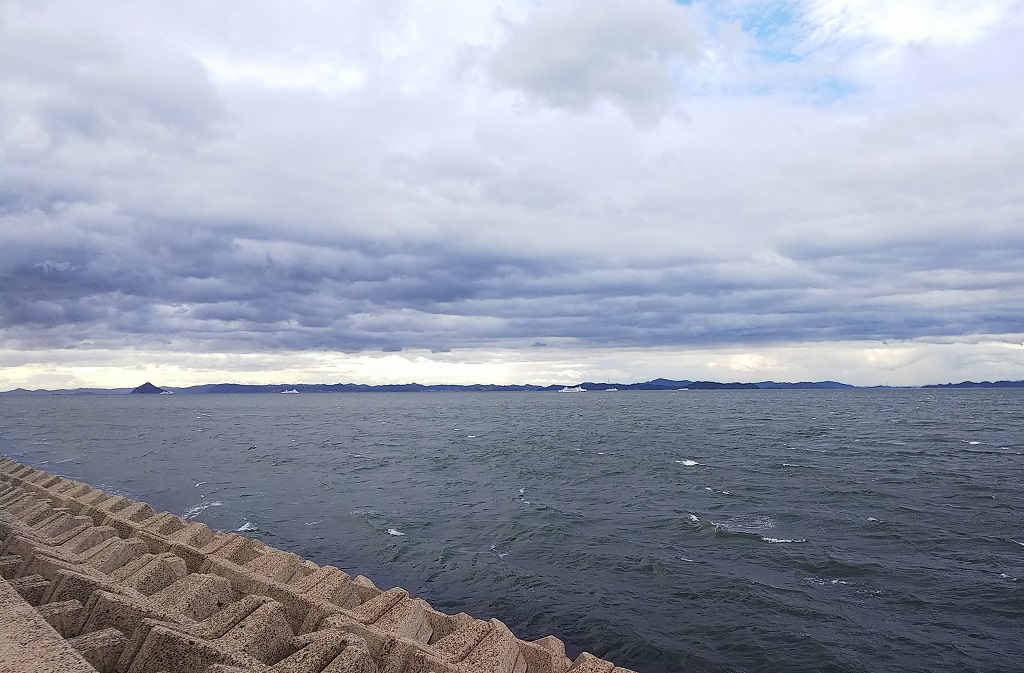 So, typhoon number 20 is upon us – literally, the eye of the storm should reach Takamatsu in less than an hour […]