Noe Aoki‘s Particles in the Air is one of the works of art that have been in the area, namely Teshima, since the very first Setouchi Triennale back in 2010.

While it’s not the most amazing Art Setouchi piece, and the concept is a bit questionable (it’s about making visible particles that usually are invisible while floating in the air… if you say so…), it’s still an interesting sculpture located in a very interesting setting. 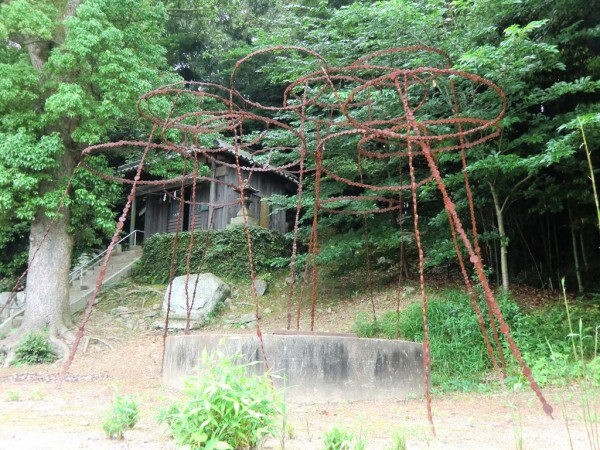 The sculpture is located at the entrance of the village of Karato, just above a large water tank, which – although I could be wrong – supplies the village with water. It is also right next to a small shinto shrine and the view on the fields and the Seto Inland Sea downhill from there is simply stunning. There is also a small pool that used to be the source of freshwater for the people of Karato (uphill is one of the few springs that can be found on the island), and a few more little details that make discovering this spot a small adventure in itself. The place almost has an unreal atmosphere, being at the crossroads of many different realms: natural and manmade, historical and contemporary. A place where there isn’t much to see if you don’t pay attention and that is so rich and fascinating if you stop and look around.

So don’t overlook it during your next visit of Teshima.

Particles in the Air is an outdoors artwork as such is accessible year round, every day, at any hour, for free.

4 thoughts on “Particles in the Air on Teshima”